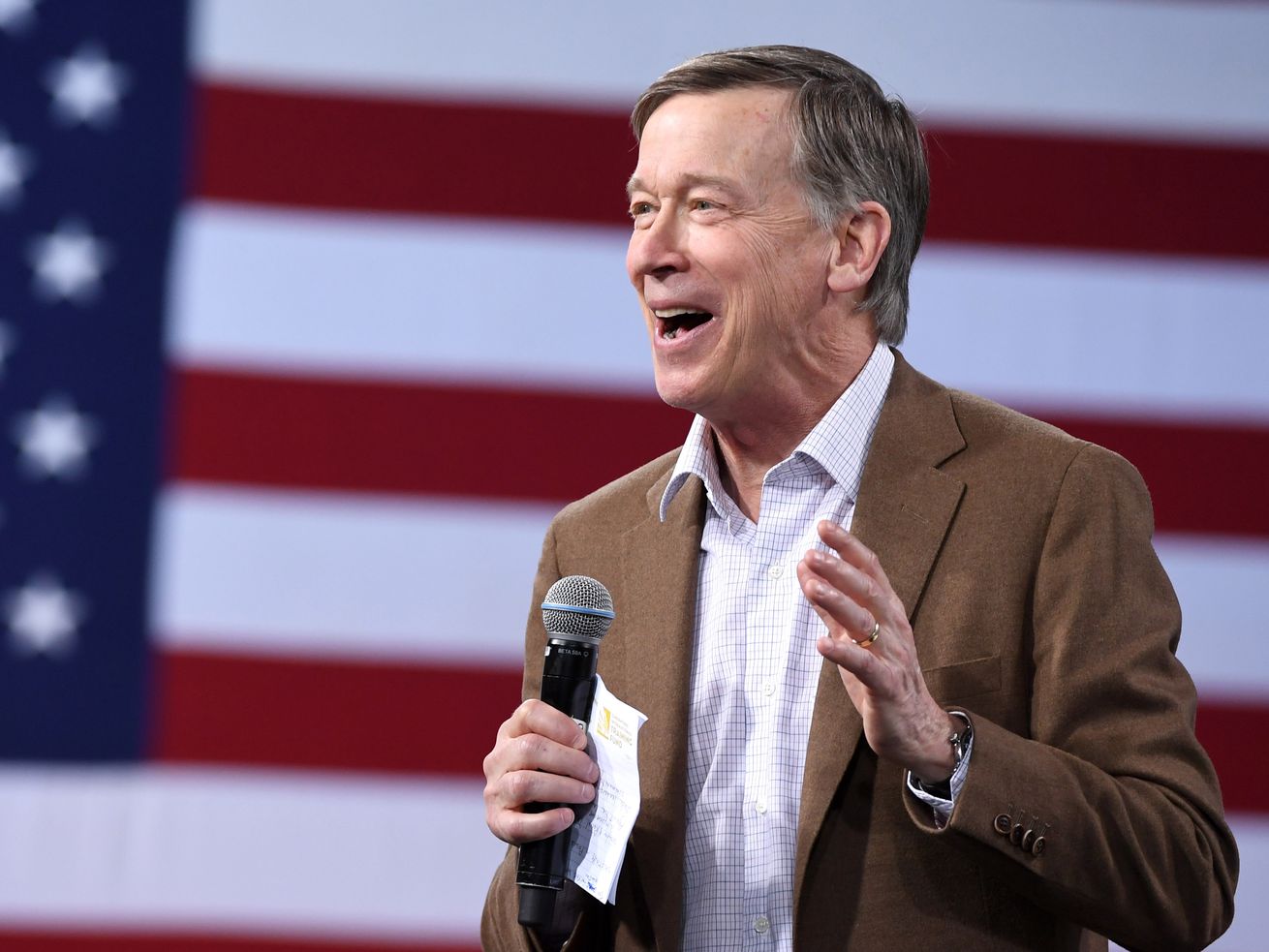 John Hickenlooper, Colorado’s popular former governor, is making a bet that the crowded 2020 presidential field — already packed with US senators, entrepreneurs, mayors, and governors — has a lane for his middle-of-the-road politics.

The 67-year-old is about as close to the image of a Democrat from the Mountain West as you could come to in a lab. His announcement video opened with him standing in the snow, in front of a grand American landscape, sharing his self-made business story: After being laid off from his job as a geologist, he opened Denver’s first craft brewery pub, a business he grew to 15 restaurants and brewpubs across the Midwest.

His message is that he can work with anyone.

“I’ve proven again and again I can bring people together to produce the progressive change Washington has failed to deliver,” Hickenlooper said in the video, touting a record of expanding Medicaid with a split state legislature and getting oil and gas companies and environmentalists to compromise on methane regulations.

There’s a growing number of Hickenlooper-type hopefuls in the race; politicians like Sen. Amy Klobuchar (D-MN) are bucking the party’s leftward swings to pitch compromise, getting things done, and working across the aisle. But even the Colorado Democrat recognizes that his moderate image could be a liability in a Democratic primary.

“Look at all these primaries, right?” Hickenlooper told Politico about the 2018 midterm elections. “People like me have been casualties along the side of the road in many of these cases.”

Since he began exploring a possible bid, he’s been polling between 0 and 1 percent — mostly a sign of his lack of name recognition. Whether his everyman persona can carry him far out of his state remains to be seen.

Hickenlooper is known for his retail politics: meeting voters and sharing an approachable personal story about a suburban Philadelphia kid who studied English in college, became an unemployed geologist, opened a brewpub in Denver, and then ran for office.

He has had real electoral success in Colorado. He was one of the few Democrats to survive the 2014 Republican swing midterm election and left his tenure as Colorado governor very popular for a divided state. It’s a success story that had Colorado Democrats hoping he would challenge Republican Sen. Cory Gardner in the 2020 Senate race, instead of running for president.

But Hickenlooper is arguing that his 16 years of executive experience, between eight years as Denver’s mayor and eight years in the governor’s mansion, make him a better fit for the White House. During his time in office, he cultivated a quirky persona as the positive, beer-brewing politician who would jump out of airplanes to campaign for ballot initiatives and rail against nasty politics with videos of him showering in full dress (to drive home the point that negative ads make him feel dirty).

It’s also when he developed his moderate track record, in part because Republicans controlled one chamber of the state legislature throughout his governorship.

This centrism was core to his popularity in Colorado. As FiveThirtyEight’s Nathaniel Rakich pointed out, the only times Hickenlooper’s popularity dipped was when he adopted liberal positions around gun control, signing in universal background checks and a ban on high-capacity magazines; and around criminal justice, granting a stay to a death row inmate.

Hickenlooper has tried to position himself on both sides of many issues. He has said he is supportive of the idea of a Green New Deal, but environmentalists in his state are quick to point out that he twice fought off regulations that would have kept oil companies farther away from homes, schools, and parks. He opposed the campaign to legalize marijuana in his state, until he began to see it as an “economic miracle.”

As governor, Hickenlooper opted to expand Medicaid in Colorado, which he is now touting on the 2020 campaign trail as bringing near-universal health care coverage to his state. He’s repeatedly partnered with Republican Ohio Gov. John Kasich; the two crafted a health care proposal to reform the Affordable Care Act that stayed well clear of single-payer health care, and wrote to President Trump in support of NAFTA.

So far in the 2020 field, Hickenlooper has tried to take on Bernie Sanders directly, rebutting the Vermont senator’s call for democratic socialism.

“I have great respect for Sen. Sanders. He’s provided great clarity and urgency around the major issues facing working families,” Hickenlooper said at the National Press Club in Washington, DC, according to remarks provided by his campaign. “But I fundamentally disagree that we should do away with the democratic, regulated capitalism that has guided this country for over 200 years.”

But earlier in the campaign, he said he doesn’t support labels like “socialism” and “capitalism.”

“I’m happy to say I’m a capitalist, but I think at a certain point the labels do nothing but divide us,” Hickenlooper said.