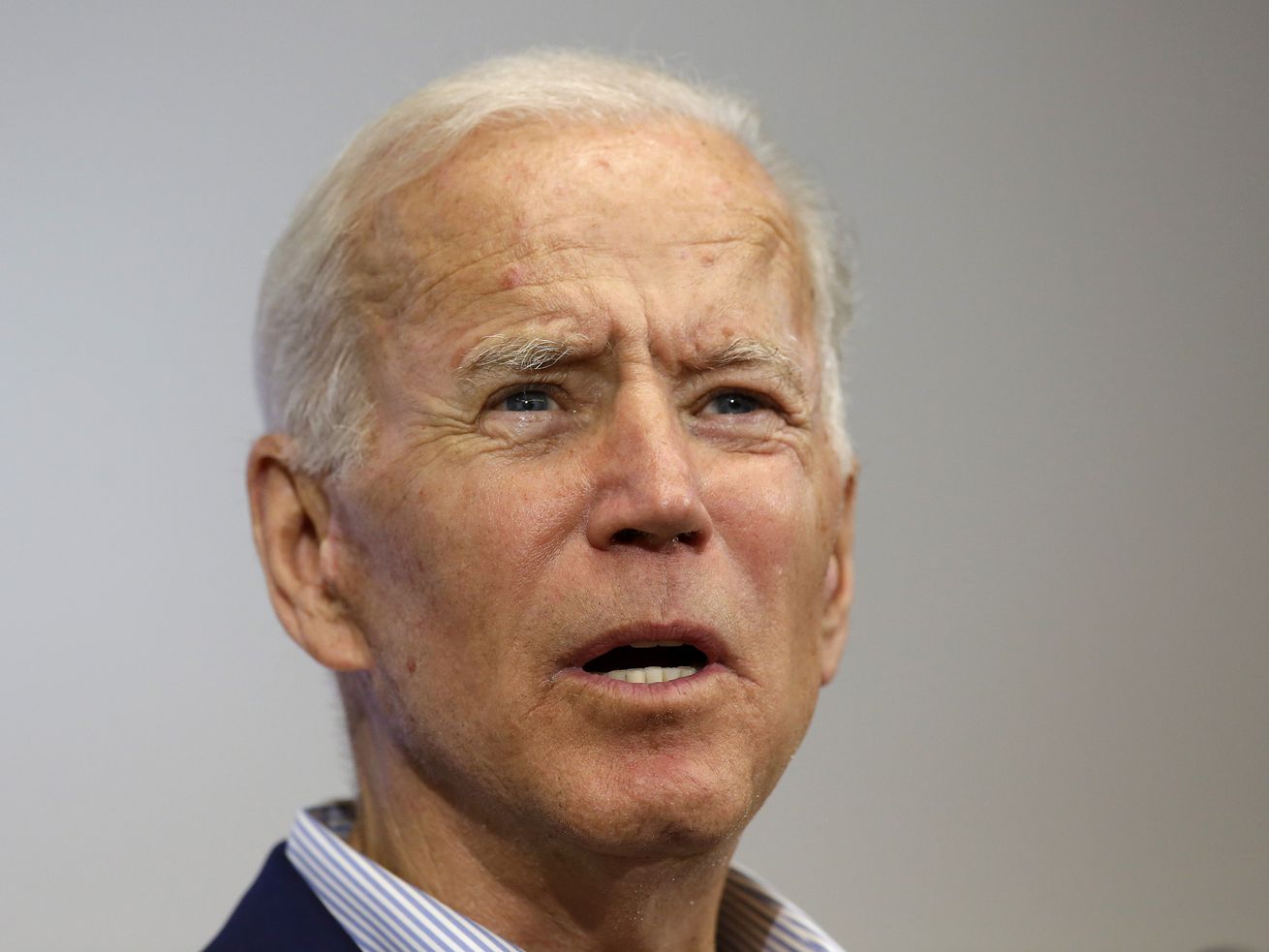 The remarks at the fundraiser surfaced two long-running fears some Democrats have had about Biden’s candidacy.

At a fundraiser on Tuesday, former Vice President Joe Biden pulled a Joe Biden, stirring up controversy after speaking off the cuff about his fond memories of working alongside segregationist senators, and telling wealthy donors they have nothing to fear from his presidency.

While stressing the importance of “civility” in politics, Biden recalled how he’d worked productively alongside two segregationist senators, including the virulent racist Sen. James Eastland (D-MS). “At least there was some civility. We got things done. We didn’t agree on much of anything,” Biden said. “Today, you look at the other side and you’re the enemy.”

Then Biden repeated his earlier remarks that he didn’t want to “demonize” the wealthy and added that, though “income inequality” is a problem that must be addressed, under his presidency, “no one’s standard of living will change, nothing will fundamentally change.” He went on: “I need you very badly. I hope if I win this nomination, I won’t let you down.”

The remarks aren’t quite gaffes, exactly, because they reflect Biden’s longtime approach to politics. Yet the comments fit uncomfortably with a changing Democratic Party and provide ammunition for his more combative challengers ahead of the first Democratic debate next week. They also call attention — again — to another longtime trait of Biden’s: his tendency to speak off the cuff in a way that causes problems for him.

What Biden said about the segregationist senators

Here is what Biden said about the segregationist senators, courtesy of a press pool report written by the Wall Street Journal’s Ken Thomas. (We should note that Biden made the decision to let reporters in to all of his fundraisers.) He began by talking about the importance of reaching consensus:

“I know the new New Left tells me that I’m — this is old-fashioned. Well guess what? If we can’t reach a consensus in our system, what happens? It encourages and demands the abuse of power by a president. That’s what it does. You have to be able to reach consensus under our system — our Constitutional system of separation of powers.”

Then, as an example of how this could be done, he brought up segregationist senators Eastland and Herman Talmadge (D-GA). Though he disagreed with them, he said, “we got things done.” Such “civility,” he went on, is sadly lacking in today’s politics.

Mr. Biden then recalled his time serving in the Senate. “I was in a caucus with James O. Eastland,” Mr. Biden said, briefly channeling the late Mississippi senator’s Southern drawl. Mr. Biden said of Mr. Eastland, “He never called me boy, he always called me son.”

Mr. Biden then brought up a deceased Georgia senator, “a guy like Herman Talmadge, one of the meanest guys I ever knew, you go down the list of all these guys. Well guess what? At least there was some civility. We got things done. We didn’t agree on much of anything. We got things done. We got it finished. But today, you look at the other side and you’re the enemy. Not the opposition, the enemy. We don’t talk to each other anymore.”

In one sense, what Biden is saying is banal: Civility is good, and politicians who disagree should nevertheless work together to improve the country. His point seems to have been that if he could manage to “work with” segregationists whom he strongly disagreed with on racial issues, surely it’s possible to reach consensus with Senate Majority Leader Mitch McConnell and the modern GOP.

Biden is also reflecting the political conventional wisdom of the time — the 1970s, when he joined the Senate and served with these men — that Congress and the Democratic Party had many racists and segregationists, so working together with them on some issues was simply a matter of practicality.

However, critics argue that this supposedly more civil age in politics should not be idealized — because it was in fact dominated by white men who were happy to minimize or trade away nonwhite voters’ concerns to retain political power.

The comments drew some of the harshest criticisms from Biden’s rivals yet. Sen. Cory Booker (D-NJ) released a statement saying Biden’s “relationships with proud segregationists are not the model for how we make America a safer and more inclusive place for black people, and for everyone.” He added that he’s “disappointed” Biden “hasn’t issued an immediate apology.”

New York City mayor and presidential candidate Bill de Blasio also blasted Biden for the comments on Twitter, saying that Eastland “thought my multiracial family should be illegal” and that Biden’s comments show he’s “out of step with the values of the modern Democratic Party.”

It’s past time for apologies or evolution from @JoeBiden. He repeatedly demonstrates that he is out of step with the values of the modern Democratic Party. (2/2)

Biden would likely respond by saying he’s a longtime supporter of civil rights measures such as the Voting Rights Act — though critics have said the story isn’t so simple, and have pointed to Biden’s record opposing what he called “forced busing” for school integration.

What Biden said about rich people, inequality, and standards of living

After that, Biden went on to a riff about “rich people” and “inequality”. Per the pool report, this is what he said:

“By the way, you know, remember I got in trouble with some of the people on my team, on the Democratic side, because I said, ‘You know what I’ve found is rich people are just as patriotic as poor people.’ Not a joke. I mean, we may not want to demonize anybody who has made money.”

The truth of the matter is, you all, you all know, you all know in your gut what has to be done. We can disagree in the margins but the truth of the matter is it’s all within our wheelhouse and nobody has to be punished. No one’s standard of living will change, nothing would fundamentally change. Because when we have income inequality as large as we have in the United States today, it brews and ferments political discord and basic revolution. Not a joke. Not a joke. I’m not (inaudible) revolution. But not a joke. It allows demagogues to step in and say the reason where we are is because of the other, the other.” You’re not the other. I need you very badly. I hope if I win this nomination, I won’t let you down. I promise you. I have a bad reputation, I always say what I mean. The problem is I sometimes say all that I mean.”

Though these comments are somewhat muddled, Biden appears to be trying to make three points:

One interpretation of Biden’s comments is that he’s telling these rich donors, essentially, that some redistribution of wealth won’t hurt them all that much, and that it’s better for everyone (including them) if it happens, so they shouldn’t freak out about it.

This is arguably not so different from how, say, Elizabeth Warren promotes her marquee proposal of a wealth tax — she stresses that it’s a mere two cents on every dollar above a $50 million-plus fortune.

A less sympathetic glean is that Biden is assuring the wealthy that whatever redistribution of wealth he pursues will be limited and moderate, and there’s no “revolution” coming that they should freak out about.

Still, Biden’s real offense in the eyes of many was more about a signal of whose side who was on.

The former vice president assured these wealthy supporters that he was on their side, that he wouldn’t stand for them being demonized, and promised he “won’t let you down.” This may be what politicians generally do when they ask rich people to give them money. But it’s certainly not encouraging to those hoping the next Democratic president would try and rein in the power of the wealthy.

Biden is the frontrunner, but many have long questioned whether he will run into trouble — for exactly these reasons

The former vice president is the obvious frontrunner at this point. Biden has led nearly every poll both nationally and in early states. But it hasn’t been clear how much of this was based on vague, general positive impressions of Biden from the Obama administration — and how much could be undermined by the performance of Joe Biden the actual candidate, as the campaign heats up.

The controversy over the fundraiser comments has given new life to two big questions that have long loomed over Biden’s candidacy — whether he’s out of touch with the current Democratic electorate, and whether his mouth will get him into trouble.

Biden first entered national politics in the 1970s, and the Democratic electorate has changed enormously since then. That long record as a mainstream Democrat poses him a problem that’s similar to the one Hillary Clinton faced in 2016 — how to defend positions he held decades ago that are no longer viewed as acceptable in the party of today.

Meanwhile, another longtime trait of Biden’s has been his unguarded way of speaking: He goes off-script, he embarks on lengthy riffs, and he sometimes says things he ends up regretting. Time magazine’s list of Biden’s top gaffes mostly reads as benign in the age of Trump, but Biden’s campaign opponents are certainly not going to go out of their way to read everything he says generously.

Biden’s comments at the fundraiser have brought both of these issues to the fore — and just in time for next week’s Democratic debate, the first time his challengers will be able to take him on face-to-face.