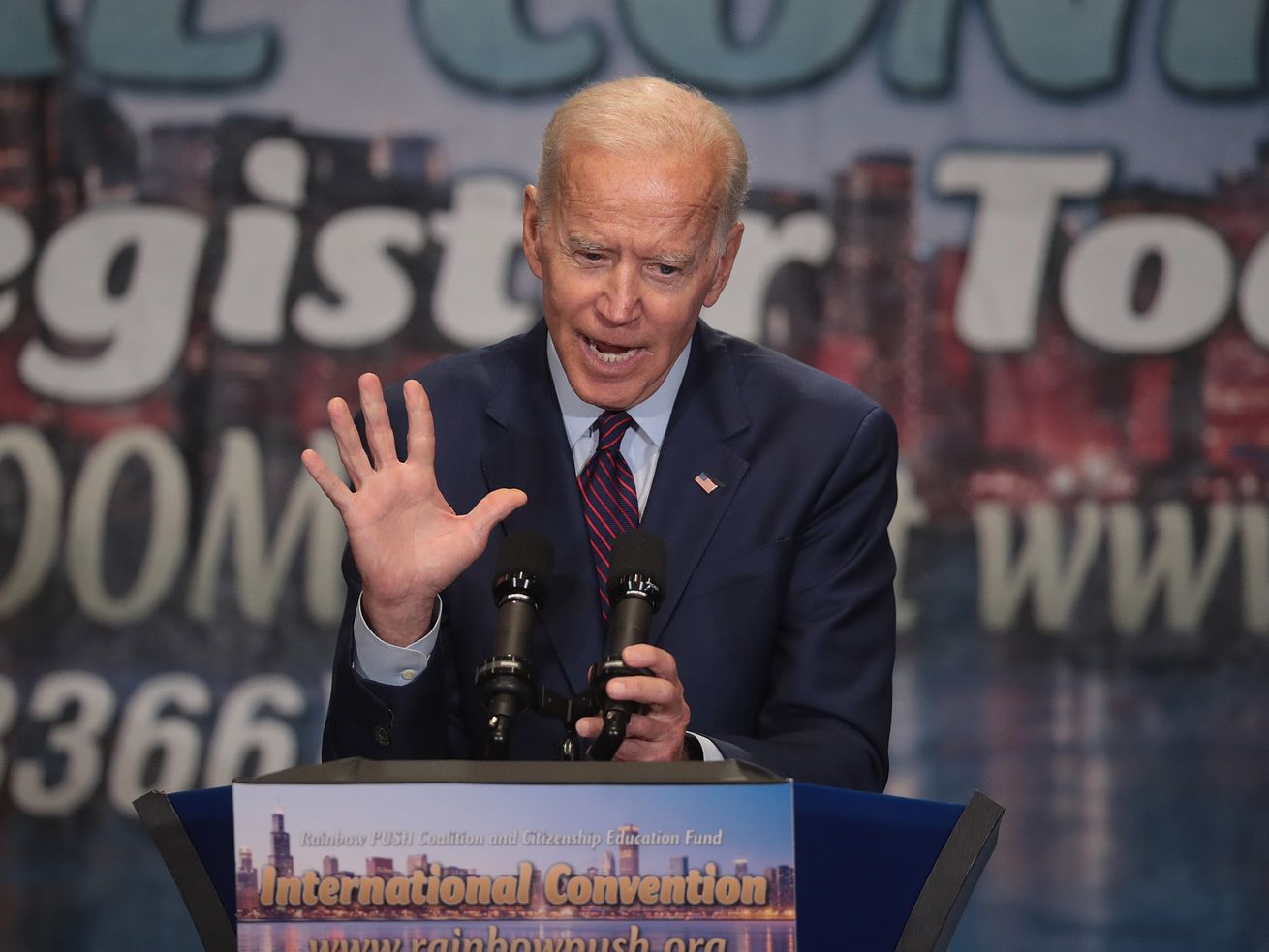 On Friday, Biden appeared at the Rainbow PUSH Coalition Convention in Chicago with Rev. Jesse Lee Jackson. He used his speaking time to try and set the record straight after Harris said a 1975 Biden bill preventing schools trying to desegregate by busing minority children to predominantly white schools and vice versa from accessing federal funds was personal and “hurtful” to her, as someone who was one of the first black classes to integrate her own Berkeley, California, school district.

As he did on Thursday, Biden went on defense, saying “I never, never, ever opposed voluntary busing … I’ve always been in favor of using federal authority to overcome state-initiated segregation.” During the debate, Biden clarified that what he was opposed to was busing that was ordered by the US Department of Education.

30 seconds to 60 seconds on a campaign debate exchange can’t do justice to a lifetime committed to civil rights. I want to be absolutely clear about my record and position on racial justice including busing. I never, never, ever opposed voluntary busing. And as a program that Senator Harris participated in — and it made a difference in her life. I did support federal action to address root causes of segregation in our schools and communities, including taking on the banks and red-lining and trying to change the way in which neighborhoods were segregated.

I’ve always been in favor of using federal authority to overcome state initiated segregation. In fact, I cast a deciding vote in 1974 against an amendment called the Gurney amendment which would have band the right of the federal courts to be able to use busing as a remedy. You might guess in the middle of the most extensive busing order in American history in my city and state, it wasn’t what you’d call the most popular vote in the country at the time.

“30 seconds to 60 seconds on a campaign debate exchange can’t do justice to a lifetime committed to civil rights.” – @JoeBiden responding to comments from @KamalaHarris during the #DemDebate2 last night
https://t.co/YznkCKU9YU pic.twitter.com/pAoruy2edy

Harris took a direct shot at Biden’s record on race during Thursday night’s NBC debate. The exchange started with Harris taking the frontrunner to task for his recent comments about his past positive working relationships with segregationist senators. Things got even more heated when Harris proceeded to bring up the 1975 busing bill.

“You also worked with [those segregationist senators] to oppose busing. And there was a little girl in California who was part of the second class to integrate her public schools and she was bused to school every day. And that little girl was me,” Harris said, staring Biden down. “So I will tell you that on this subject, it cannot be an intellectual debate among Democrats. We have to take it seriously. We have to act swiftly.”

“I did not oppose busing in America,” he responded at the debate. “What I opposed is busing ordered by the Department of Education. That’s what I opposed.”

Biden’s campaign later criticized Harris’s characterization of how his votes impacted her personally, arguing none of Biden’s votes in the Senate would have had a negative impact on the school busing program in Berkeley where Harris was a student. (The city’s integrated busing program for elementary schools was adopted in 1968; Biden was elected to the Senate in 1972.)

“Sen. Harris either didn’t know or misrepresented the facts,” a Biden campaign spokesperson said in a statement to Vox. “When Biden said it wasn’t true that he supported anything that would have stopped the busing program that impacted her, he was correct. None of [Biden’s] votes would have negatively impacted the Berkeley School Busing Program.”

Biden and Harris are in direct competition with each other for black voters in 2020. Biden has been polling well with black voters since getting in the race, particularly older black voters who don’t want to risk electing President Donald Trump for a second term. Biden attacking Trump as an ally of white nationalists has been a large part of his electoral strategy so far.

Later during his Friday remarks in Chicago, as he talked about criminal justice reform — another potentially weak spot for him in the primary — Biden said, “We need to reform the criminal justice system, make sure black mothers feel confident when their son [is] out on the street, that he’s going to be safe. We’ve got to recognize that kid wearing the hoodie may very well maybe the next poet laureate and not a gang banger.”

Joe Biden: “We’ve got to recognize that kid wearing a hoodie may very well be the next poet laureate and not a gangbanger.” pic.twitter.com/67HFGjPON8

Harris wanted to take him to task during the debte in front of a national audience to make an impression with black voters. Whether he felt the heat or not, Biden certainly was trying to correct the record the day after.