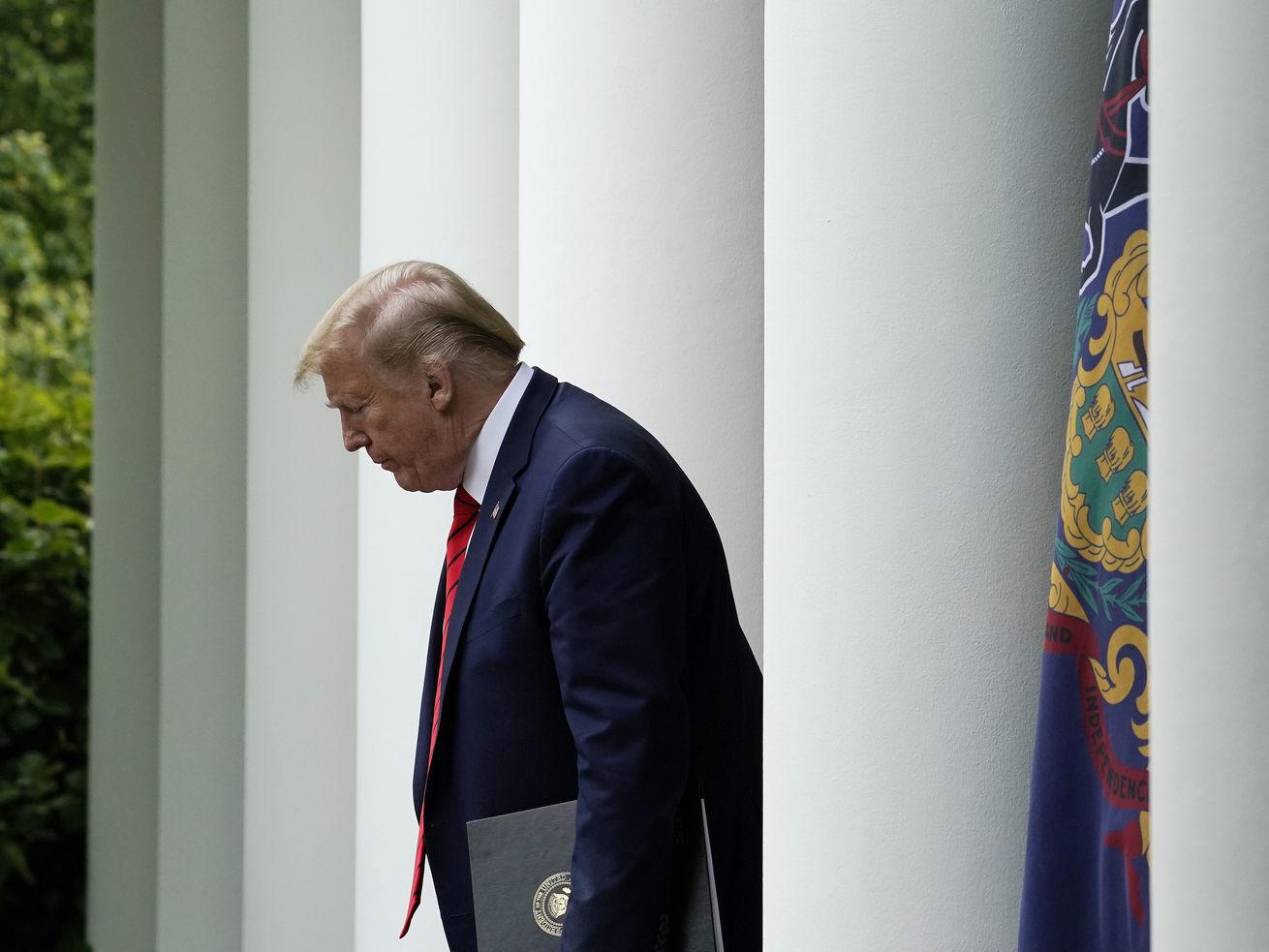 Monday’s news conference ended with Trump melting down in response to questions from female reporters.

On Monday, a reporter exposed President Donald Trump for yet again peddling a nonsensical conspiracy theory about Barack Obama.

Hours after Trump posted a string of tweets and retweets about “Obamagate” — a new conspiracy theory that holds Obama responsible for masterminding the Russia investigation and railroading former Trump administration National Security Adviser Michael Flynn into a guilty plea for lying to the FBI (never mind that there’s no evidence of investigatory misconduct) — Philip Rucker of the Washington Post called Trump’s bluff.

“In one of your Mother’s Day tweets, you appeared to accuse President Obama of ‘the biggest political crime in American history, by far’ — those were your words. What crime exactly are you accusing President Obama of committing, and do you believe the Justice Department should prosecute him?” Rucker asked, during a news conference that was ostensibly about the coronavirus.

“Uh, Obamagate. It’s been going on for a long time,” he began. “It’s been going on from before I even got elected, and it’s a disgrace that it happened, and if you look at what’s gone on, and if you look at now, all this information that’s being released — and from what I understand, that’s only the beginning — some terrible things happened, and it should never be allowed to happen in our country again.”

Of course, “Obamagate” does not involve a crime, and there’s no evidence that Obama or his top officials conspired against Trump — quite the opposite. So when Rucker pressed the point by asking what exactly the ostensible crime was, Trump resorted to smears.

“You know what the crime is. The crime is very obvious to everybody. All you have to do is read the newspapers, except yours.”

.@PhilipRucker: You appeared to accuse Obama of a crime yesterday. What did he do?

RUCKER: What is the crime?

TRUMP: “You know what the crime is. The crime is very obvious to everybody.” pic.twitter.com/EUueidNwGp

You might be wondering why this even came up during a press conference about coronavirus testing. The answer appears to be that with the US leading the world in deaths and the number of new cases in the country not yet showing a strong downward trend, Trump believes fresh conspiracy-mongering about Obama is politically useful for him — even if there is no basis for them.

The rest of the press conference proved the point: After repeating misinformation about testing and the state of coronavirus cases, he abruptly ended the event and huffed off the stage when two female reporters asked him pointed questions.

If the press conference was meant to show that Trump has things under control, it failed spectacularly

After Trump prematurely declared victory over the coronavirus, lied about US testing capacity, and misled people about how America’s response stacks up to other countries in the world, Monday’s news conference ended with a bang.

His meltdown began when Weijia Jiang of CBS asked him to explain why he seems to be fixated on competing with other countries while 2,000 or so Americas continue to lose their lives each day from the coronavirus. Trump fired back by telling her to “ask China.”

Jiang, who is Asian American and who previously said that a White House official referred to the coronavirus as the “Kung-Flu” to her face, followed up by asking Trump, “Sir, why are you saying that to me, specifically?”

“I’m telling you,” Trump said, “I’m not saying it specifically to anybody. I’m saying it to anybody who would ask a nasty question like that.”

.@weijia: Why is this a global competition to you when Americans are losing their lives every day?

TRUMP: Maybe that’s a question you should ask China.

WEIJA: Why are you saying that to me, specifically?

TRUMP: I’m saying it to anybody who would ask a nasty question like that. pic.twitter.com/hokJOXASh8

Trump followed that seconds later up by throwing a tantrum when Kaitlan Collins of CNN tried to ask him a question, then storming away.

Trump throws a fit when @kaitlancollins of CNN tries to ask him a question and abruptly ends the press conference pic.twitter.com/58AVZ9CABl

In sum, Trump’s performance featured a baseless conspiracy about America’s first black president, incendiary comments toward an Asian American journalist, and then a press conference-ending fit. This shtick may have served him well at times, but in the context of the pandemic, one can see why his advisers reportedly concluded weeks ago that these press conferences are doing him no favors.