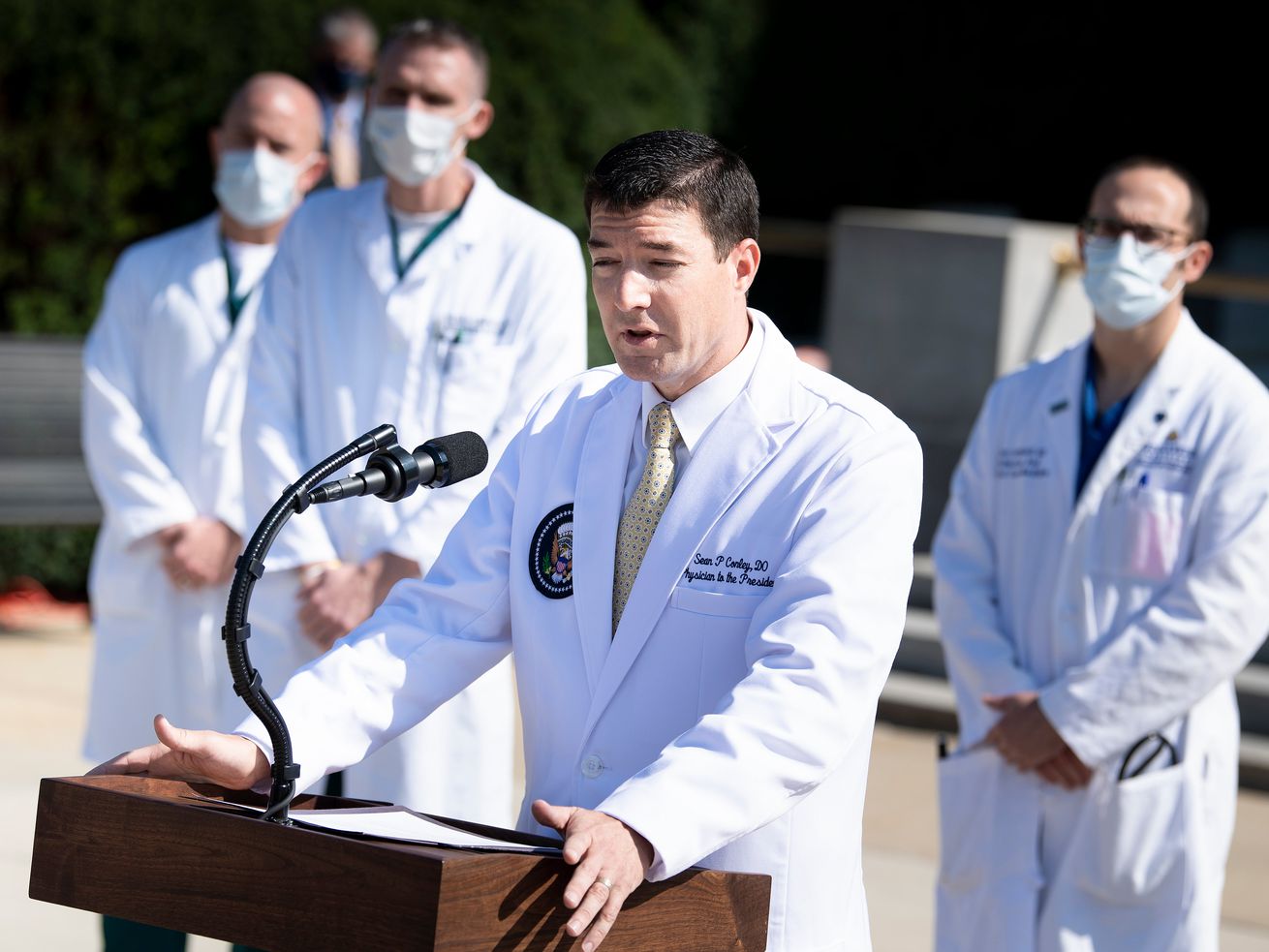 Sean Conley, physician to President Donald Trump, gives an update on the president’s health as he is treated for a Covid-19 infection at Walter Reed Medical Center, October 4, 2020, in Bethesda, Maryland. | Brendan Smialowski/AFP/Getty Images

Trump was given dexamethasone, a steroid typically used in some severely ill Covid-19 patients.

Sunday’s press conference on President Donald Trump’s status as a Covid-19 patient raised just as many new questions as answers, leaving many medical experts concerned that the public still isn’t getting a complete or accurate picture of the commander-in-chief’s health.

At the briefing at Walter Reed National Military Medical Center, where Trump is being treated, his physician, Sean Conley, said Trump was “doing very well” and had improved so much he could be discharged as soon as Monday.

Yet the optimistic report on the president’s prognosis also came with the admission that Trump had needed supplemental oxygen on Friday for a short period because his blood oxygen saturation had dropped to worrisome levels. Conley said he’d withheld that fact on Saturday because he wanted to “reflect the upbeat attitude that the team, the president” has had about the course of Trump’s illness.

The president’s medical team also reported that Trump on Saturday was started on yet another drug to fight Covid-19: dexamethasone. The steroid has been shown in clinical trials to improve outcomes — but is only recommended for patients with severe or critical Covid-19. It’s also the third Covid-19 drug to be administered to the president, following an experimental monoclonal antibody treatment given Friday and an ongoing, five-day course of the antiviral remdesivir.

But dexamethasone can also have serious psychiatric side effects, and the decision to use it so early in the president’s infection sparked a new round of speculation about the severity of his illness.

Vox spoke to four infectious disease and intensive care doctors about the news to try to make sense of it. Their opinions were mixed: Some believe Trump might be sicker than the White House is saying, while others say the treatment decisions are not unreasonable given that the patient is a high-risk, 74-year-old VIP.

One thing everyone agreed on: Trump’s health status today, whatever it is, doesn’t say anything about how he’ll be doing a week from now, given the unpredictability of this disease.

What we know about Trump’s health

If we go by the official reports from the White House, Trump has been improving and was doing just fine as of Sunday morning — but he had a bad Friday. That was when he experienced a fever and his oxygen levels dropped.

Conley said Trump’s “oxygen saturation transiently dipped below 94 percent. … And after about a minute with only two liters, [it was] back over 95 percent.” After an hour, Trump was off the oxygen, Conley added. On Saturday, Trump’s blood oxygen saturation level again dropped to 93 percent for a short time — but Conley couldn’t confirm whether the president required oxygen then.

Instead, since then, Trump’s health has improved so much, his doctors said, he may head back to the White House as soon as Monday. His doctors also said he hasn’t had a fever since Friday morning, his vitals are stable, and he’s not experiencing any shortness of breath any longer.

Conley did not provide details about the results of the president’s chest CT scan, prompting Bob Wachter, chair of the Department of Medicine at the University of California San Francisco, to wonder if they’d found signs of pneumonia, other manifestations of Covid lung involvement, or inflammation.

… But it seems far likelier that they found evidence of pneumonia or other manifestations of Covid lung involvement or inflammation, which is serious and raises the level of concern and risk. (4/8)

Meanwhile, Trump has been given at least three new drugs — that are still being tested — to treat Covid-19 and its symptoms.

On Friday, Trump’s doctors say they started administering the intravenous antiviral remdesivir and a cocktail of experimental monoclonal antibodies — medicines that are supposed to stop the virus from replicating and progressing into cells.

We learned Sunday he had also started taking dexamethasone — a steroid that reduces inflammation associated with Covid-19. (He had also been on zinc, vitamin D, famotidine, melatonin, and daily aspirin — though it’s not clear whether those drugs are for Covid-19 specifically, since there’s no conclusive evidence to back their use for the new coronavirus.)

Of the three drugs, dexamethasone has the strongest evidence behind it. “It’s the only drug to show improvement — overall improvement — in Covid-19,” said Joshua Barocas, an assistant professor of medicine at Boston University and infectious disease physician at Boston Medical Center.

Barocas referred to a study published in the New England Journal of Medicine. It showed randomly chosen patients who received dexamethasone experienced a reduced risk of death versus those who didn’t, but only when they were either intubated or receiving supplemental oxygen.

In patients who aren’t on oxygen, the risks associated with the drug’s use may outweigh the harms.

“I wouldn’t be giving it to someone who is not on oxygen,” Boston-area ICU doctor Lakshman Swamy said, since it can cause confusion, delirium, or even complicate a patient’s recovery by suppressing the immune system’s virus-fighting response. That’s why Covid-19 treatment guidelines only call for its use in seriously ill patients.

Dexamethasone can cause frank mania, or more severe depressive states. Added to the risk of COVID related neuropsychiatric symptoms/severe delirium the press ought to be asking the medical team how they are formally monitoring his mental status @maggieNYT @jonathanvswan

“It’s not a completely benign choice of medication,” Jen Manne-Goehler, an infectious disease doctor at Brigham and Women’s and Massachusetts General hospitals, added.

That’s also part of the reason why some doctors questioned the idea Trump might be discharged as soon as Monday.

While we don’t know all the details here, I’ll say this— if you’re having dropping oxygen levels and being started on #dexamethasone, your discharge day shouldn’t be tomorrow. #covid19

Another drug Trump’s doctors are using to try to stop the virus is an experimental cocktail of monoclonal antibodies from the drug company Regeneron. In theory, the antibodies are supposed to work by neutralizing the coronavirus. He’s also on a five-day course of remdesivir — an antiviral developed by Gilead Sciences that’s supposed to stop the virus from replicating.

There is published evidence for the use of remdesivir — in hospitalized patients, it shortened their recovery time compared to the placebo group — but no one knows what happens when patients get the two drugs together.

The monoclonal antibodies for Covid-19 have also not been fully tested in humans. (We’ve only got published studies on hamsters and monkeys, and unpublished efficacy data from an ongoing human trial, according to Science magazine.)

“What’s confusing or surprising is [why] you would use something so early … with no efficacy data out there,” said Manne-Goehler of the monoclonal antibodies. From a scientific standpoint, she reasoned, starting on the drug early might make sense if you’re trying to prevent the virus from entering cells. “But what’s odd is as a clinical doctor, I don’t jump to [prescribing] things I have little real-life efficacy data [on] in a person who is not super sick.”

Even if the experimental drug looks promising in early research, Swamy said, “people said the same thing about hydroxychloroquine,” a drug now known to be ineffective for Covid-19. He added: “We don’t know enough about it.”

So one could read the use of unapproved drugs typically given in severe cases as a sign that Trump is sicker than the White House is acknowledging. Or maybe it’s just because the patient is the president, said Peter Hotez, dean of the National School of Tropical Medicine at Baylor College of Medicine.

“You know he’s got risk factors. He’s starting to get sick. Has had a fever and an oxygen requirement. The question is what do you do?” Hotez said. “If something were to happen to the president — whether he becomes incapacitated or worse — that’s a huge national security threat.” So even if the drugs haven’t been fully tested, it might make sense to try them anyway.

The bottom line: It’s too soon to tell if Trump is on the road to recovery

Trump’s health status now — even if he’s discharged from Walter Reed Monday — tells us little about how he’ll fare over the next week.

Patients “can be doing fine, requiring a little bit of supplemental oxygen, and then very rapidly deteriorate to mechanical ventilation — that’s one of the scariest things about this virus,” Barocas said.

Manne-Goehler agreed: “What makes Covid scary is that who falls off a cliff — and who doesn’t — still can be difficult to predict.” She said the public will have to wait until at least 10 days after his symptoms began to know how he’ll do.

“I had a patient who came in not that different from Trump” in terms of his age and underlying health risks, Manne-Goehler said. “He looked pretty bad, he got to the edge of the cliff and got better. But there are people who just blow through anything we try to do [for them] and do terribly. That script — even with what we understand about risk factors — is part of what scares the medical community. I’d worry until 10 days or so after he started to get sick.”