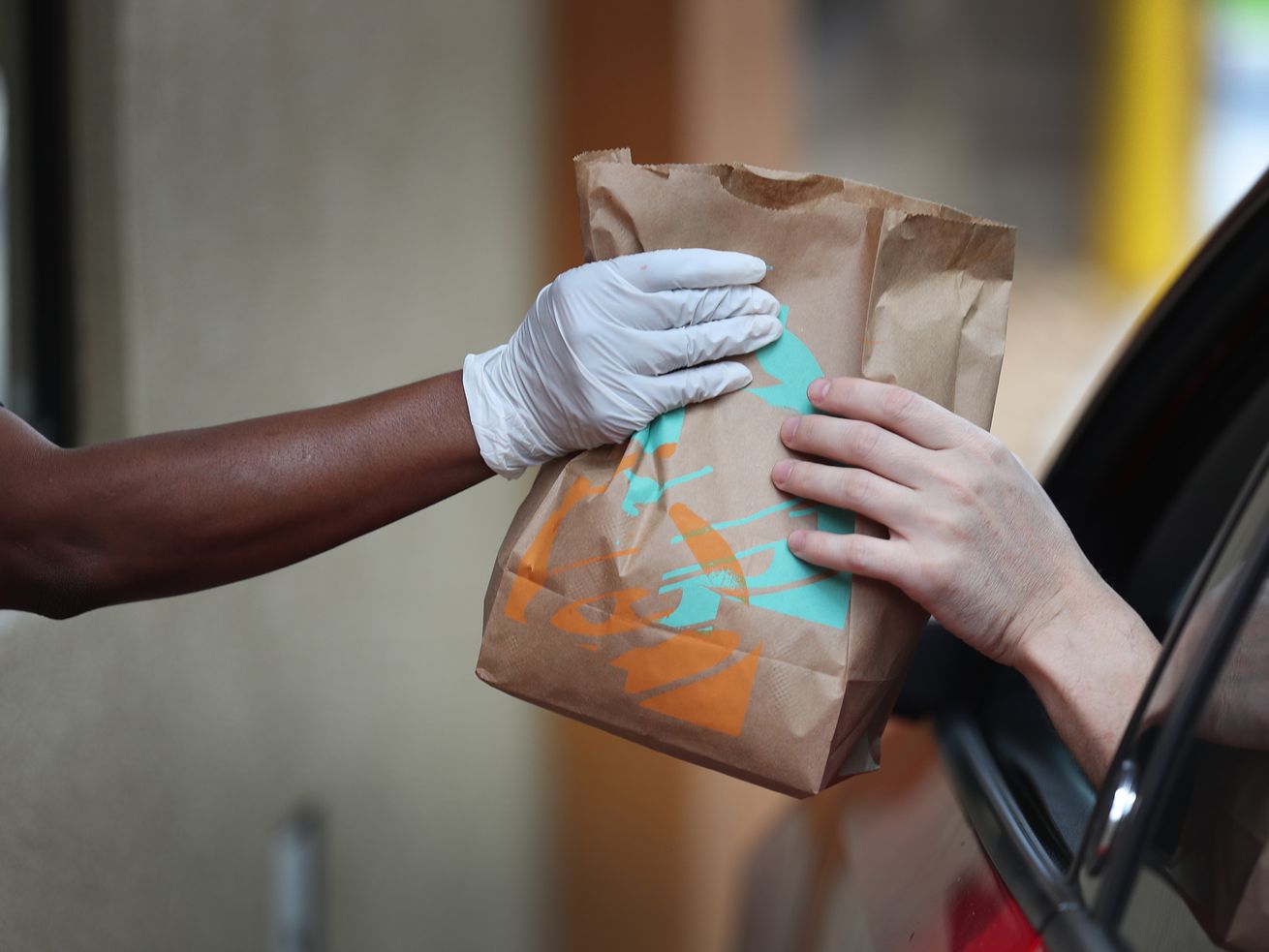 A gloved Taco Bell employee delivers an order to a customer at the drive-up window of the restaurant on March 31, 2020, in Hollywood, Florida. | Joe Raedle/Getty Images

Without government regulations and strict enforcement from corporate, retail and fast food workers can only do so much to keep stores safe.

At the Starbucks where she works, Elizabeth and her coworkers are doing everything they can to protect against the coronavirus. They take their temperatures at the beginning of every shift, wash their hands every 30 minutes, wear masks at all times, and do their best to stay 6 feet apart from each other while preparing lattes and frappuccinos. But they can’t control their customers.

“Among ourselves, we feel safe,” Elizabeth said about herself and her coworkers. “But we don’t know if the customers are washing their hands.” (Elizabeth and the other workers interviewed for this story asked to be referred to by pseudonyms to protect them against retaliation from their employers.)

“Among ourselves, we feel safe. But we don’t know if the customers are washing their hands.”

Now considered essential personnel, workers at big-box stores, coffee shops, and fast food chains have been asked to take on additional responsibilities to keep customers safe. They’re finding that even when their managers follow all the new safety procedures to the letter, the people they’re serving may not take them seriously at all. While chains and retailers might talk a big game about safety at the corporate level, everyone’s welfare ultimately boils down to customer and employee behavior at any given store.

In lieu of issuing any national standards to protect workers from the virus, the federal government has instead asked companies to regulate themselves. As the New York Times reported in April, the Occupational Safety and Health Administration told retail employers to “consider restricting the number of customers allowed inside the facility” and to “consider providing alcohol-based hand sanitizers.” But those are recommendations, not requirements.

While some states and cities have implemented regulations of their own, such as requiring everyone to wear masks while out in public, many others haven’t. Experts say this patchwork of enforcement has left front-line workers — not just doctors, nurses, and EMTs, but also retail and foodservice employees — particularly vulnerable, especially as some states start to ease back restrictions.

“I think the issue here is that we shouldn’t be allowing big non-union corporations like Amazon or Walmart to decide what is a sufficient level of safety precautions for their workers,” said John Logan, the director of labor and employment studies at San Francisco State University. “Because to be perfectly honest, I think experience shows that they cannot be trusted to prioritize the safety of their workers and even the safety of their customers over their own profits.”

Workers say customer behavior that was once innocuous now feels dangerous. The United Food and Commercial Workers’ Union (UFCW) stresses that what’s really needed is for state and local governments to “establish these uniform safety standards.” But customers and brands have a role as well, especially in places where the government refuses to act. “For as long as this pandemic endures, companies must implement and enforce store safety measures,” they write via email, “And customers must be encouraged to shop smart.” As Marc Perrone, president of the UFCW told CNN, “careless customers” are “probably the biggest threat” to workers right now.

Thomas, who works at a Target in Texas, said customers get close to each other and to workers in the store, even though the chain has emphasized its pick-up and delivery services. “We have these stickers on our shirt that Target gave us that say, ‘Please maintain a 6-foot distance,’” he said. “I still have a lot of people coming up, tapping me on the shoulder, getting real close when they’re trying to show me what they’re trying to buy.”

“I still have a lot of people coming up, tapping me on the shoulder”

At first, most customers wore masks. But after Texas Gov. Greg Abbott issued an executive order banning cities and counties from banning people who don’t wear masks, “mask usage by [customers] decreased,” Thomas said. (A Target spokesperson told The Goods that it’s following all local ordinances regarding mask use. In cities and states where masks aren’t mandatory, the spokesperson said, customers are encouraged to wear them anyway but won’t be turned away if they aren’t.)

Employees still wear masks, to protect both each other and the customers, but the masks don’t keep them from getting sick themselves. If customers interacting with employees don’t wear masks, they’re still protected because the employees are wearing them; employee safety, meanwhile, is left in the hands of those customers.

Mike Van Dyke, an occupational health professor at the Colorado School of Public Health, told The Goods customers should be “respectful” by wearing masks and “maintaining distance as much as possible” while shopping. “It gets hard in terms of different places across the country,” he said. “Some places have required mask ordinances in place and some places don’t.”

In many cases, workers are being asked to put their health on the line for just a few dollars an hour above their base pay, if that. Some don’t feel like they have a choice.

At Starbucks, which reopened 85 percent of its locations in early May, workers are getting paid $3 an hour above their usual base wage. A Starbucks spokesperson told The Goods that employees who don’t feel comfortable returning to work can take one month of unpaid leave; those who live with first responders, have tested positive for coronavirus or are exhibiting symptoms, or have school-aged children at home will keep receiving catastrophe pay.

Starbucks has emphasized contactless orders through the app since reopening, but the spokesperson said some locations continue to accept cash and credit cards.

Less than a week after Elizabeth was back on the job, Starbucks told employees that it would be setting up a register by the door for customers, “making the ‘no-contact’ if mobile orders redundant because we will once again be interacting with cash and cards, which are known to be filthy,” Elizabeth said. “This is in reaction to customers complaining about the setup, which is very frustrating to my fellow [baristas] and I, because it’s apparently not enough for us to put ourselves at risk just so they don’t have to make their own coffee.”

Elizabeth said some of her coworkers decided to take the unpaid leave, something she and many others can’t afford to do. Jeff, a barista who works at an Arizona Starbucks, said a month-long leave of absence isn’t feasible for him or for his other coworkers who live paycheck to paycheck.

Workers at other chains aren’t receiving hazard pay at all. Daniel, who works at a Taco Bell in the Midwest, said he’s still being paid his usual $12.50 an hour rate.

Despite this, the fast food giant is treating him and other workers as essential. In a March letter to customers detailing the chain’s new safety protocols, Taco Bell CEO Mark King said franchisees and employees “have an obligation to do something to help stop this from spreading.” All employees, King said, would be required to wear a mask and gloves; there would be contactless temperature checks at the beginning of every shift; the brand would make “every effort to ensure hand sanitizer is always available in the restaurants for team members and customers.”

But Daniel said not all of these policies have gone into effect. When I asked him about the contactless temperature checks, he thought I was referring to food thermometers, not to contactless thermometers for employees. “We don’t have that,” he said. “Not even close.”

Despite the procedures, Daniel said, customers continued to operate as if it was business as usual. “An alarming amount of [customers] weren’t wearing masks, weren’t wearing gloves when they gave me their card,” he said. “I saw a few coughing into their shirts — I was looking at them through the drive-thru window.” He didn’t feel safe coming to work, but he also couldn’t afford not to.

The morning before a recent shift, though, he woke up with no sense of taste or smell and immediately called in sick. He has since learned that he’s the fourth employee at his location to test positive for the coronavirus. He doesn’t know if he got it from a coworker or a customer. He doesn’t know how his coworkers got it, either, and he isn’t receiving paid sick leave, even though it’s likely he got the virus on the job. (Taco Bell said the company is “constantly evolving and improving our protocols to ensure that our team members continue to work in safe environments” but did not comment on whether its employees are receiving sick leave.)

“It gives me nausea to think about that, to think about who I could’ve gotten it from, in retrospect,” he said, “because there were so many people who were throwing caution to the wind thinking this doesn’t apply to them.”