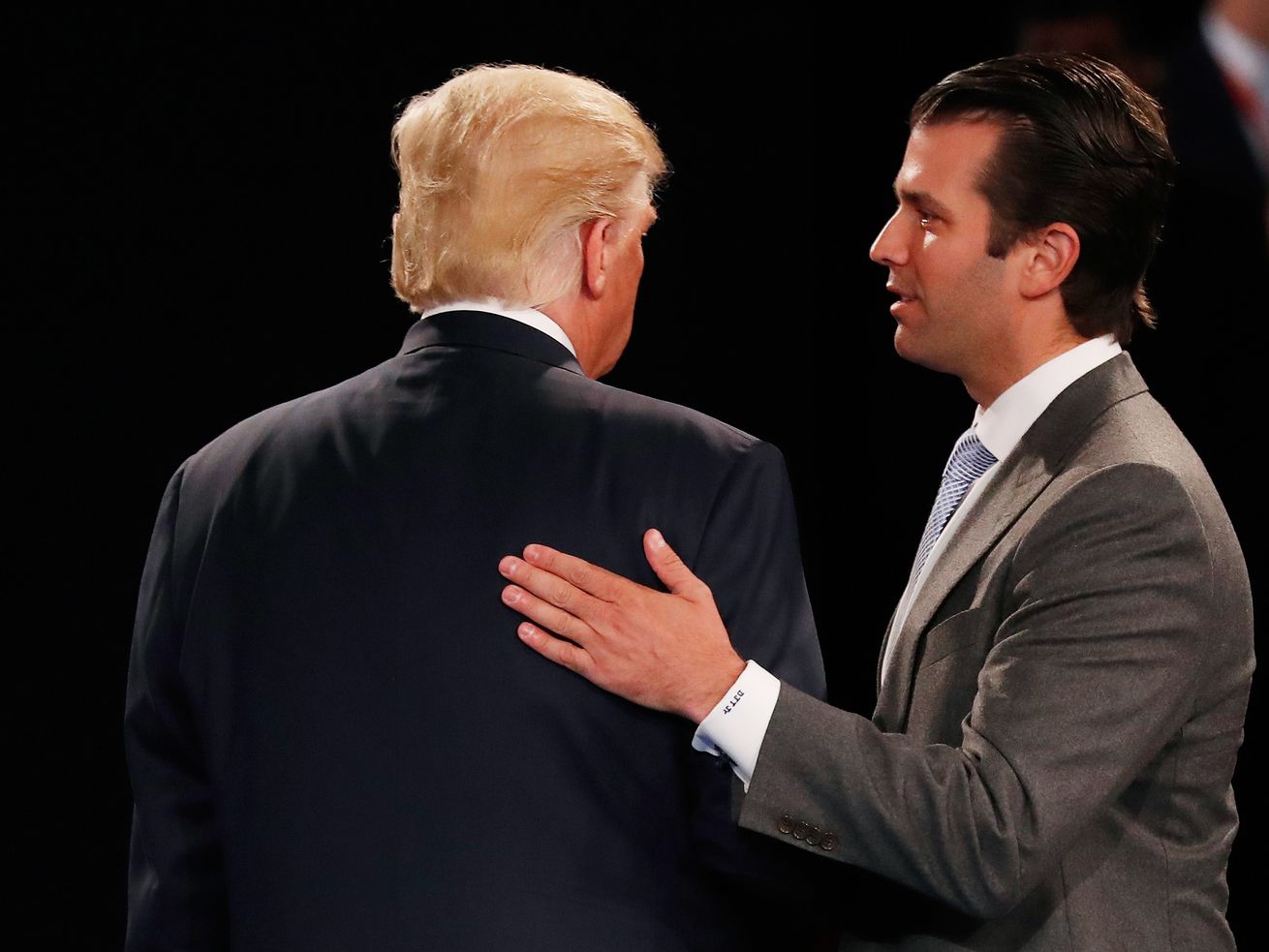 The FEC chair: “It is illegal for any person to solicit, accept, or receive anything of value from a foreign national in connection with a U.S. election.”

“I would not have thought I needed to say this,” Federal Election Commission head Ellen Weintraub tweeted regarding a statement she’d issued outlining why it’s illegal for US political candidates to accept contributions from foreign governments.

Because somehow, the country is debating this yet again after President Donald Trump told ABC News’s George Stephanopoulos in an interview that aired Wednesday that if someone from a foreign country called him offering damaging information on a 2020 rival, “I think I’d want to hear it.”

It was a remarkable statement — not least because the special counsel just finished a two-year investigation into this very thing.

Trump tried to (sort of) walk it back in an interview with Fox & Friends on Friday: “You’d have to look at [the information being offered], because if you don’t look at it, you won’t know it’s bad. But, of course, you give it to the FBI or report to the attorney general or somebody like that.”

It wasn’t exactly an unequivocal condemnation. And ahead of the 2020 election, it’s renewed questions about what is and isn’t legal when it comes to the involvement of foreign nationals in US campaigns.

House Democrats said they would roll out a bill that would require campaigns to report to the FBI if any foreign government approaches them offering dirt on their opponents. Republicans largely tried to brush off the president’s comments while also claiming Hillary Clinton’s campaign did something similar by commissioning a firm that hired a former British spy, Christopher Steele, to compile that infamous dossier on Trump and his campaign’s ties to Russia.

Weintraub tried to clarify: “Let me be 100 percent clear to the American public and anyone running for public office. It is illegal for any person to solicit, accept, or receive anything of value from a foreign national in connection with a U.S. election.”

“This is not a novel concept,” she wrote. “Election intervention from foreign governments has been considered unacceptable since the founding of our nation.”

I would not have thought that I needed to say this. pic.twitter.com/T743CsXq79

America has laws to prevent outside influence in its elections. But what those laws mean in practice can sometimes be fuzzy.

The US has laws that govern how political campaigns can and cannot operate. Many of these laws are meant to limit or in some cases just illuminate the amount of outside money that is trying to influence political candidates.

And when it comes to foreign influence, the law is clear: As Weintraub wrote, it is “illegal for any person to solicit, accept, or receive anything of value from a foreign national in connection with a U.S. election.”

In most cases, what this means is pretty obvious: Foreign nationals can’t donate money to a presidential campaign. It’s also illegal for candidates themselves to solicit or receive monetary contributions from foreign nationals.

But while a “thing of value” is easy to define when it comes to money, or even services or in-kind contributions, it’s a lot more complicated when it comes to something like opposition research, or so-called campaign dirt.

“Campaign-relevant information from a foreign national definitely can be an illegal in-kind contribution, but it gets trickier when the information does not have obvious cash value and isn’t necessarily something that a campaign regularly needs to buy,” Michael Kang, a law professor at Northwestern University, told me in an email. “The policy concern is that any valuable advice or tip from a foreign national could, at least in theory, become an illegal in-kind contribution.”

Special counsel Robert Mueller grappled with this question as part of his investigation of the June 2016 Trump Tower meeting in which Donald Trump Jr. and other members of the Trump campaign met with a Russian national who’d promised to give them “dirt” on Hillary Clinton as part of Moscow’s effort to support Trump’s candidacy.

Mueller concluded in his report that “candidate-related opposition research given to a campaign for the purpose of influencing an election could constitute a contribution to which the foreign-source ban could apply,” but added that the issue hadn’t really been tested in court and could also have freedom of speech implications.

Ultimately, Mueller declined to prosecute Trump Jr. because he said he could not prove that the president’s son “knowingly” or “willfully” broke the law, and because it was extremely difficult to assess how much the opposition research would have been valued.

That statute that governs these campaign finance law requires a threshold of at least $2,000 for a misdemeanor and more than $25,000 for a felony. Those attending the Trump Tower meetings testified that they didn’t receive any dirt, so Mueller concluded that it would be very difficult to assess the value of the information, making it hard to prove a campaign finance violation beyond a reasonable doubt.

“Mueller most certainly did not say that accepting opposition research from a foreign government is very legal and very cool,” Vox’s Andrew Prokop explains. “He did, however, choose not to bring charges in this particular instance, for reasons relating to the specifics of the evidence and the situation.”

Experts are split on Mueller’s conclusion on Trump Jr. But experts I spoke to also pointed out that Mueller’s decision was about whether Trump Jr. should be criminally charged — and doesn’t address the question of whether he could be subject to civil penalties from the FEC, which has a much lower threshold. (For example, Common Cause, a good-government watchdog group, has filed complaints with the FEC and the Justice Department on the Trump Tower meeting.)

And while the value of opposition research might be hard to gauge, experts said it’s difficult to argue that it doesn’t have some worth, as campaigns regularly pay for it. Jessica Levinson, a law professor at Loyola Law School, told me that practical considerations would suggest that, yes, campaign dirt does have value.

“There’s a reason campaigns pay for opposition research: We literally value it,” Levinson said. “It can be much more useful and valuable than walking in with a check.”

Speaking of opposition research, what’s the deal with Steele dossier?

In 2016, lawyers for Hillary Clinton’s campaign paid a company named Fusion GPS to do opposition research on Trump and his campaign. Fusion GPS then hired a former British spy named Christopher Steele to compile information about Trump’s ties to Russia, all of which ended up in a dossier.

Republicans have long had an issue with the dossier, but this week, Republicans, including Sen. Lindsey Graham (R-SC), used it to deflect from Trump’s comments. Graham said that all public officials should contact the FBI if approached by a foreign government, but added that “this has not been a recent practice and we saw that come to a head during the 2016 presidential campaign.”

But Graham pointed to the Clinton campaign as his example. “During that race, we had a major American political party hire a foreign national, Christopher Steele, to dig up dirt on an American presidential candidate,” he tweeted.

Experts told me that when it comes to campaign finance law, hiring or contracting a foreigner to do services for a campaign is allowed. “You can pay a foreign national to provide you with services, so a campaign, for instance, could have a campaign attorney who is a Canadian citizen,” Levinson said. “As long as you pay fair market rates for those services, that’s not what the federal campaign act says is prohibited. That’s just a fair exchange of money for services.”

If this kind of seems like a loophole, experts pointed out that it would be really hard to run a campaign otherwise. It would mean having to worry if the campaign signs you printed came from a foreign company, or if the catering firm you hired had foreign workers.

If a campaign is paying someone for work or services, they’re being compensated. But where that doesn’t happen, and a campaign is accepting a contribution — or “thing of value” — from a foreign government, the question then is what’s in it for them?

As Weintraub noted, America’s founders knew that when foreign governments seek to interfere in elections, it’s always to advance their interests, not America’s.

And that’s the bigger problem with Trump’s apparent dismissal of the seriousness of foreigners reaching out to offer dirt on rival candidates. Frances Hill, a law professor at the University of Miami, told me that while the discussions of criminal law are important, Trump is “acting in a way that undermines national security.”

Just about the only thing Democrats and Republicans can agree on when it comes to the Mueller report is that Russia interfered in the 2016 election. The intelligence community has said Russia will almost certainly try again in 2020 — and other countries, like China and Iran, will have learned the lessons of 2016 and be eager to follow suit.

Mueller did not establish coordination between the Trump campaign and Russia, but his report made it clear that the Trump campaign “expected it would benefit from information stolen and released through Russian efforts” during the 2016 campaign.

Trump said Friday on Fox & Friends that he doesn’t “think anybody would present me with anything because they know how much I love the country.” But his comments earlier in the week suggested otherwise. Jared Kushner, Trump’s son-in-law and White House senior adviser, also wouldn’t say in an interview last week whether he’d call the FBI if he were offered dirt again.

And that refusal to be unequivocal about foreign interference ultimately undermines a thing of value for all Americans: the belief in the integrity of the vote.