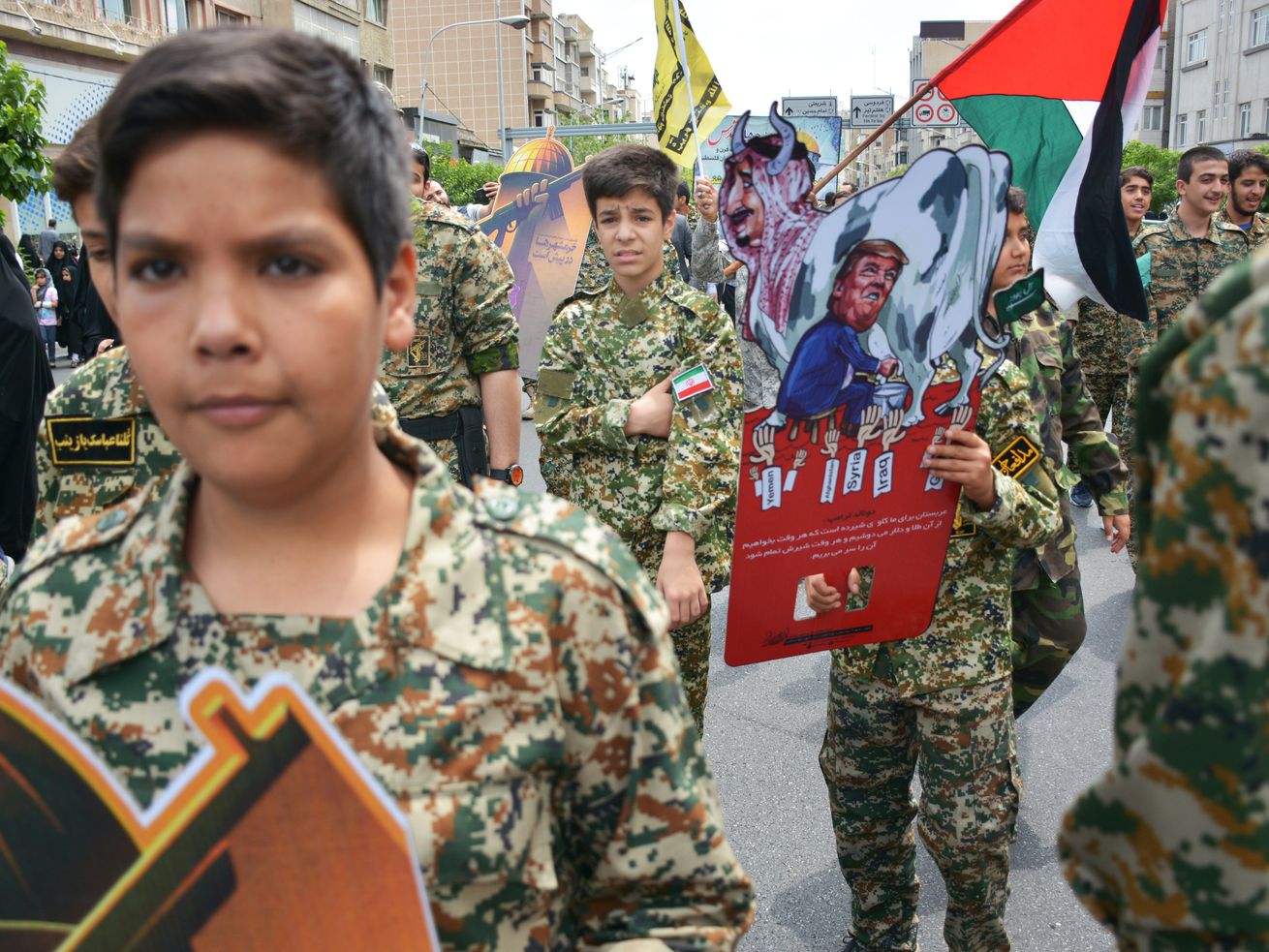 Iran promises to “firmly confront any aggression” as Trump promises a peaceful resolution to increasing tensions: “I’m going to be their best friend.”

One day after President Donald Trump announced he’d cancelled plans for military action against Iran, Iranian officials issued a stark warning to the US, saying Iran is ready to “firmly confront any aggression.”

The cancelled strike was planned as retaliation for the Iranian downing of a US drone Thursday. Tension between the two countries has been building for more than a year following the US’ exit from the Iran nuclear deal, and only intensified when the Trump administration imposed new sanctions and trade restrictions on Iran.

In recent weeks, the US has stationed additional troops in the Middle East and Iran has announced it will stop abiding by parts of the nuclear deal. The US has also accused Iran of attacking oil tankers in the Gulf of Oman, something Iran claims it did not do.

Speaking to Tasnim, a news agency affiliated with the Iranian government, Saturday foreign ministry spokesman Abbas Mousav did little suggest tensions will be easing soon. “Regardless of any decision [US officials] make,” he said, “We will not allow any of Iran’s borders to be violated. Iran will firmly confront any aggression or threat by America.”

Also appearing on Tasnim, the senior spokesman of Iran’s Armed Forces, Abolfazl Shekarchi, echoed this sentiment, saying, “Any mistake by Iran’s enemies, in particular America and its regional allies, would be like firing at a powder keg that will burn America, its interests and its allies to the ground.”

Speaking directly about the Iranian attack on the drone, the commander of the Revolutionary Guards’ aerospace division, Brigadier General Amirali Hajizadeh, told the Islamic Republic News Agency: “This is our response to a violation of Iranian space and if the violation is repeated then our response will be repeated.”

These newest statements are in line with what senior Iranian officials have said in recent days. Following the drone attack, Javad Zarif, the foreign minister of Iran, wrote on Twitter, “We don’t seek war, but will zealously defend our skies, land & waters.”

The US wages #EconomicTerrorism on Iran, has conducted covert action against us & now encroaches on our territory.

We don’t seek war, but will zealously defend our skies, land & waters.

With Iran remaining resolute in its messaging and seemingly unwilling to take steps to lower tensions, European leaders hope to convince Iranian officials to pursue a diplomatic solution to the standoff with the United States.

On Saturday, German Chancellor Angela Merkel said, “I say that [a political solution] should not just be a hope, but that it should be worked towards with the utmost seriousness.” She also pledged German resources towards this end, “We can also help to make what we want — a political, diplomatic solution — possible.”

The UK hopes to advance peace in an upcoming meeting. Britain’s Middle East minister, Andrew Murrison, will visit Iran on Sunday. The British foreign office said the purpose of the minister’s visit is to “further open, frank and constructive engagement with the government of Iran.” The visit from the British official comes less than a week after France sent a top diplomatic adviser to Iran as part of European efforts to reduce tensions in the region.

France, Germany, and the UK have been trying to save the 2015 nuclear deal despite the Trump administration pulling out of it; these efforts have been complicated by US sanctions on Iran and by Iran’s announcement that it plans to disregard limits on its stockpile of low-enriched uranium set by the deal. As Vox’s Jen Kirby explained, “This is intended to pressure the Europeans (France, Germany, and the UK) to give Iran economic relief from sanctions. Tehran says, if the Europeans step up, it will go back to following the terms of the deal.”

So far, little public progress has been made by European officials, but France, Germany, and the UK have signaled they plan to remain proactive in seeking some form of detente.

President Trump Saturday suggested the US’ allies should not be overly worried by recent escalations. Speaking with reporters at the White House, the president projected confidence in a peaceful resolution.

Iran has said it could have destroyed a manned US aircraft when it shot down the drone, but that it chose not to in order to avoid the loss of life. According to Voice of America, a US Air Forces Central Command spokesperson said no manned plane was near the drone. Trump, however, contradicted this claim and expressed appreciation towards Iran for not shooting down the manned craft.

“There was a plane with 38 people yesterday, did you see that? I think that’s a big story,” the president said. “They had it in their sights and they didn’t shoot it down. I think they were very wise not to do that. And we appreciate that they didn’t do that. I think that was a very wise decision.”

Despite these warm words, Trump went on to announce new sanctions on Iran.

President Trump says the US is moving forward on additional sanctions on Iran https://t.co/oZ2pdaUDui pic.twitter.com/nz0NUbPZBx

“We’re moving forward with additional sanctions on Iran,” he said. The president did not give an exact timeline for these sanctions and did not detail what they would include; he only said, “They’re going on slowly, and in some cases pretty rapidly.”