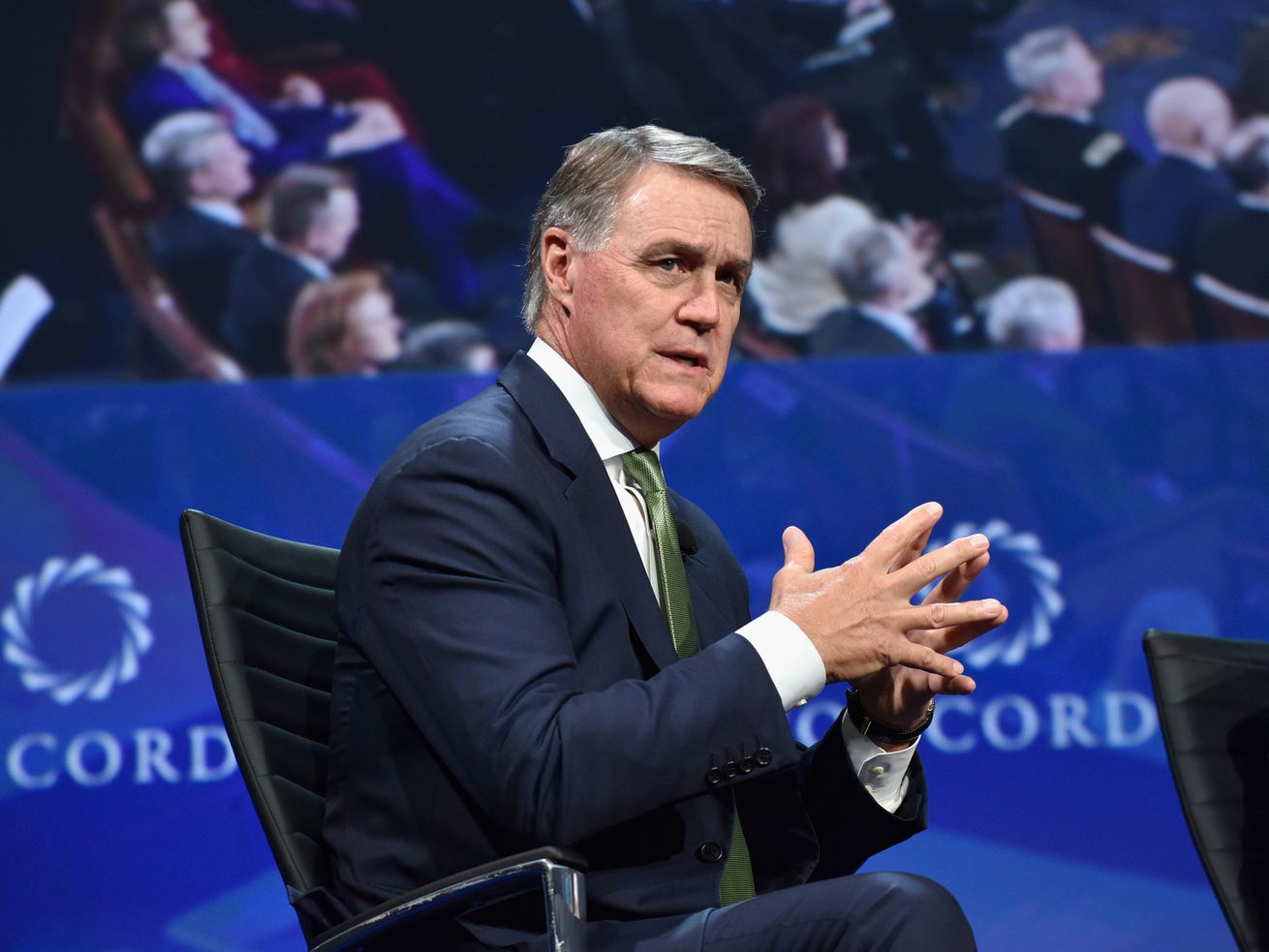 “A certain number of us will die on our public roads every year,” he told local business leaders.

On a recent call with local business leaders, Sen. David Perdue (R-GA) defended Georgia’s reopening process by comparing the risks of contracting Covid-19 to those of driving a car, indicating that calculating risk amounts to personal responsibility, according to a recording of the call obtained by Vox.

“We get in an automobile, we drive on our public roads, and a certain number of us will die on our public roads every year,” Perdue can be heard saying on the recording of a Zoom call with the Rome Floyd Chamber last Thursday. “Well, each of us in a representative democracy have the freedom to make that determination about the risk level for me as an individual. And therefore, we choose to go or we choose not to go. In a situation like this, as long as we have good information, we can make our own decisions.”

Ironically, on the day of the call, the state of Georgia announced its 1,557th confirmed coronavirus death in the 15 weeks since the state’s first confirmed case, exceeding the 1,504 automobile deaths in the state in all of 2018, the most recent year for which statistics are available.

There’s still a lot we don’t know about the risks of the novel coronavirus and how it compares to other threats, but infectious disease experts have dismissed comparisons between the virus and automobile accidents. “I think that’s a false equivalency to compare traffic accidents with — I mean, that’s totally way out,” Dr. Anthony Fauci, director of the National Institute of Allergies and Infectious Diseases and a member of the White House coronavirus task force, said on March 20. “That’s really a false equivalency, when you have something that is new and is emerging and you really can’t predict totally the impact it’s going to have.”

A spokesperson for Perdue’s office told Vox that “in no way was Sen. Perdue downplaying Covid-19.”

The comparison to car crashes was not the only notable comment from the call. Perdue also repeated the conservative talking point that the death rate from Covid-19 compares to a bad flu season.

“As the number of active cases decline, let’s all recognize that this Covid-19 crisis is nowhere near what was being forecast back in March,” he told business leaders. “So we’re about 80,000 deaths in the United States, and we don’t want to lose anybody. But we’ve had ordinary flu seasons with more deaths than we’re seeing now in this one. So we’re now trying to get a balance between the human cost of the disease and human costs of having an economy like our shutdown.”

Perdue, who’s up for reelection this year, is not the first senator to mention automobile deaths or the flu in relation to the economic shutdown due to the pandemic. In mid-March, Sen. Ron Johnson (R-WI) made a similar remark to the Milwaukee Journal Sentinel. “[W]e don’t shut down our economy because tens of thousands of people die on the highways. It’s a risk we accept so we can move about,” he said. “We don’t shut down our economies because tens of thousands of people die from the common flu.”

President Donald Trump, who has encouraged states to reopen their economies, has also made similar comparisons. Similarly, Republican governors, like Kristi Noem in South Dakota and Kim Reynolds in Iowa, have framed the risks of contracting coronavirus as a matter of personal responsibility.

The comments made by Perdue, Trump, and other Republicans who prioritize reopening the economy over trying to get the disease under control miss the larger risk of spreading the virus to others before symptoms present. Even though Perdue wants a gradual reopening with precautions, experts say it can take up to 14 days for symptoms to show, which muddies the risk calculations — and the ethics — Perdue referred to on the call.

Even a gradual reopening with precautions could potentially make the pandemic even worse than it already is, especially without mass testing.

With the economy tanking, millions of people are suffering. But many lives have also been saved with shelter-in-place orders and social distancing guidelines.

This dynamic makes conversations about reopening particularly fraught. And, absent a coherent federal plan, states, localities, and individuals are making choices themselves.

“Today, for example, if you’re in a nursing home, somebody needs to go buy your stuff,” Perdue also said on the call. “You don’t need to be out running around yet. And you need to continue to shelter in place. If you’re 35 and want to go to a restaurant in Georgia and you follow the protocols, you know, that’s well within the guidelines, and it sounds reasonable to me.”

It’s true that some individuals are at higher risk of serious complications from Covid-19 than others. It’s also true, however, that asymptomatic 35-year-olds can spread the disease without knowing it, as Katherine Harmon Courage explained for Vox:

Throughout the pandemic, public health officials have focused on the advice that people who have symptoms of Covid-19 should self-isolate. This is crucial, to be sure. But it is also becoming “increasingly clear that there are people who are either asymptomatic or minimally symptomatic who can transmit” the virus, Carlos del Rio, chair of the Department of Global Health at Emory University, told Vox.

In fact, people can start transmitting the virus 24 to 48 hours before they start showing symptoms, he said in a briefing for the Infectious Disease Society of America.

A study in Nature Medicine of 94 confirmed Covid-19 patients found that people were most infectious right before they started to show symptoms. The researchers obtained data about people who had gotten Covid-19 as well as those who had been around them before and after they got sick. Based on this, they estimated that 44 percent of people who caught the virus from the study’s participants had gotten it from people who felt healthy at the time.

“Sen. Perdue was making the case that people should not be afraid to begin the gradual process of going back to their normal lives on account that we all face great risk every day,” a spokesperson said.

But some people will have little choice in their level of exposure. A restaurant employee likely couldn’t decide not to show up for work if they feel it’s too risky for them, even if their employer is reopening. In fact, in Georgia, that would be grounds for losing access to the unemployment benefits system without approval from the employer.

An ideological rift has emerged as states have begun to emerge from shelter-in-place orders. Many red states, like Perdue’s Georgia, Tennessee, and South Carolina, were among the first states to begin reopening, even in defiance of White House guidelines for reopening state economies.

The pandemic — and the resulting measures to “flatten the curve” — have had a hugely negative effect on the US economy. According to Labor Department data released on May 8, the economy shed about 20.5 million jobs. About half of US households have lost income due to the coronavirus pandemic, according to an NPR/PBS Newshour/Marist poll conducted April 21 through 26.

But despite all that, the vast majority of Americans seem to understand that shelter-in-place orders and other social distancing guidelines are meant to protect people from the potentially deadly virus. And they are hesitant for things to go back to normal without further testing, especially while the coronavirus continues to spread.

A Politico/Morning Consult poll of 1,991 registered voters conducted April 24 through 26 showed that nearly three in four (73 percent) voters said the US should continue social distancing measures even if it further damages the economy. Just 15 percent of voters said social distancing measures should be lifted even if it means further spreading the virus.

The conflict between those wanting to get state economies going again and those wanting to keep the populace safe from the pandemic is starting to have political consequences. Georgia’s governor, Republican Brian Kemp, has been on the leading edge of the conservative charge to reopen states, and his approval rating has taken a noticeable dive in the process.

His coronavirus response approval rating sits at 39 percent, according to a recent Washington Post/Ipsos poll. It remains to be seen whether federal legislators who support reopening, like Perdue, will be celebrated or criticized for how they are managing the ongoing health crisis.