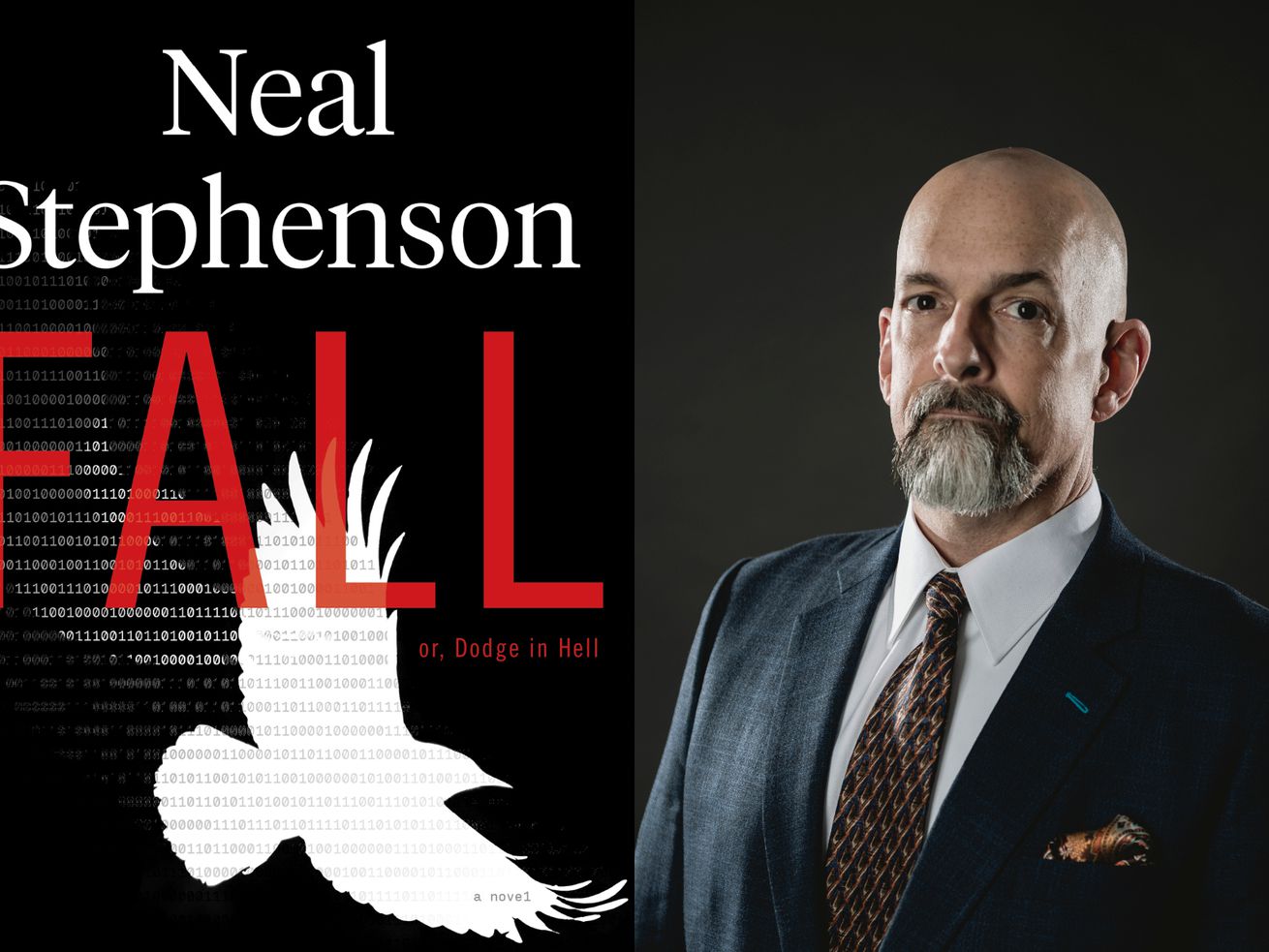 Stephenson’s latest is a luxuriously expansive thought experiment — until the end.

For years, I’ve been intimidated by science fiction author Neal Stephenson, mostly because the main thing I’ve always known about him is that his books are really, really long. At the bookstore, his massive doorstopper-size hardcovers would loom menacingly over the rest of the sci-fi section like they were going to crush all the smaller, more reasonably sized novels back into wood pulp, and I would look at them and think, “There is no reason on earth that any book ever needs to be that long. He’s doing it just to scare me.”

Recently, I read my first Neal Stephenson novel: his latest, Fall; or, Dodge in Hell, out this month. At 883 pages, Fall clocks in at about the standard Stephenson weightiness, and I can see now that the length of his books is both one of his greatest weaknesses and greatest strengths as a writer.

When Fall is at its best, its length feels luxurious and unhurried. It’s as though the book is taking place in a vast and expansive world that goes on and on forever — or in many worlds that go on and on forever — and we have nothing but time with which to explore them. You can almost hear Stephenson saying: Relax. Who cares that the event that creates the central premise of the book does not happen until page 300? Why are you in such a rush?

But when Fall starts to falter, its length begins to feel less like a luxury and more like a burden. In the novel’s last hundred pages or so, there’s a sense of palpable exhaustion and boredom to the narration. Major climactic events are skimmed over rapidly. Ideas that have been lurking intriguingly in the subtext are suddenly spelled out, explicitly and inelegantly. It all starts to feel as though you are reading an outline rather than a full novel, as though Stephenson expended all his energies during the setup and didn’t save anything for the payoff.

At the center of Fall is Richard Dodge, who featured in Stephenson’s 2011 novel Reamde. (You don’t need to read Reamde to understand what’s happening in Fall; I haven’t.) Dodge is a video game designer, and as the novel opens in the near future, he dies. In accordance with Dodge’s will, his grieving family scans his brain into computer-legible data and then uploads it onto a software platform.

There, Dodge awakens, and pulls his data together into something like a consciousness. From fuzzy bits of half-remembered ideas about geography and physics, he sculpts the chaos and static of his new virtual reality into a fully fledged world. He has very little sense of having ever lived in any world besides this new one.

Essentially, Dodge creates an afterlife. And in that afterlife, Dodge reigns supreme, an omnipotent god. He names himself Egdod.

The passages in which Egdod creates his new world are lyrical and lovely, and they are the heart of the book. He starts with nearly no perceptions, “as if one of his visual migraines had expanded to take over his entire visual cortex and, at the same time, his tinnitus had run completely out of control.” Gradually, his mind coheres enough to begin to hold on to the idea of a leaf, “coaxing it into being with the infinite patience he had built during the eons before.” The leaf becomes a series of leaves, then a tree; the tree becomes a group of trees, and they become a park, a forest, a tree-lined street.

I’m summarizing and compressing here. There’s a gap of several hundred pages between Dodge’s death and his reawakening, and it’s mostly given over to the question of what it’s like for Dodge’s friends and family to live in a post-truth society after the “Facebookification of America.”

In this new world, America has split itself in half. In the rural parts of the country, there’s “Ameristan,” where the poor and uneducated live steeped in misinformation, hoarding ammunition for a war that will never come and crucifying those they deem to be heathens.

But the coasts and the cities are full of wealthy elites who pay to have professional editors weed out fake news from their digital feeds, and regard the rest of the country with a kind of disgusted anthropological fascination.

“Their fathers believed that the people in the cities actually gave a shit about them enough to want to come and take their guns and their property,” says one character of an Ameristan gun cult. “So they put money they didn’t really have into stockpiling trillions of rounds and hunkered down waiting for the elites to come confiscate their stuff.”

It’s an elegantly plausible near-future dystopia that neatly replicates the power dynamics of our own time. It is not, strictly speaking, relevant to what will happen to Dodge — but it sets up thematic resonances that pay off powerfully in the novel’s later sections. And in the meantime, Stephenson’s prose reads so urgently and easily that I never felt I was wasting my time on those pages.

Dominating this section of the book is Dodge’s great-niece Sophia, who becomes Fall’s secondary protagonist. It’s Sophia who eventually uploads Dodge’s consciousness into a computer after he spends decades languishing on a server because no one can figure out how to read the data that now makes up his brain, and Sophia who becomes responsible for protecting Dodge from the menacing (and perhaps too tellingly named) Elmo “El” Shepherd, a tech billionaire who’s obsessed with immortality.

Fall contains rich and fascinating ideas, but it falls apart at the ending

El wants his own brain to be uploaded into the cloud so that he can become immortal. Working in an uneasy alliance with Dodge’s family, he creates a company that allows all humans to have their brains scanned and uploaded after their death; as a result, Egdod, who has been reigning in lonely splendor over his world for what he perceives as eternity, is suddenly overwhelmed by new souls entering into the reality he’s painstakingly built.

From here we move rapidly back and forth between Egdod’s world (for Egdod, the Land; for Sophia, Bitworld), and Sophia in her own world as she is locked in a power struggle with El.

In Bitworld, the new souls take on humanoid bodies and create language and tools, while Egdod rules over them in a cosmological system that reads like a composite of Greek mythology, Norse mythology, and early Christianity. As the first inhabitant of the Land and the one who understands it best, Egdod has enormous powers, and he shares them with his favorite souls in a system called the Pantheon. (Some members of the Pantheon have recognizable counterparts in Sophia’s world; many don’t.) The rest of the souls have never learned to take control of this virtual reality, and instead they live at the mercy of Egdod’s whims.

In Sophia’s world, El is horrified at the system Dodge has established. It’s too similar to their own world, he complains: “What’s the point of dying and being transmogrified into a digital entity if you’re going to use all of that computational power to re-create the analog world you just managed to escape from?” El engineers his own entrance to Bitworld, where he ousts Egdod from his seat of power — and Egdod finds himself transformed from a Zeus/Odin/Yahweh hybrid into a Miltonic Satan.

The Bitworld story essentially reaches its high point here, with Egdod’s crushing disillusionment. Then Stephenson launches into an extended Paradise Lost riff that eventually evolves into a medieval quest fantasy, and the longer it goes on, the less and less interesting the book becomes.

Part of the problem is that when Dodge is not creating worlds out of nothing, he’s actually the most boring person in this book. He has very little discernible personality: He doesn’t have Sophia’s insatiable intellectual curiosity or El’s philosophical rigor and ambition, and he’s too grandiose to be funny. But as Fall approaches its climax, it narrows its focus away from the grand philosophical ideas that animated its earlier sections to concentrate on Dodge and his problems, and specifically on his love story with a barely rendered female character who has maybe five lines of spoken dialogue in this entire 883-page book.

It’s hard to avoid the sense of anticlimax. I read the better part of a thousand pages for this asshole and his issues? That’s not the part of the story I care about at all!

And the writing in the book’s last pages does nothing to add interest. Stephenson generally loves an irrelevant detail, which is part of what gives his writing such rich texture and makes the earlier sections of Fall such a pleasure to read — but as the story approaches its climax, those details drop away. Suddenly it feels like you’re reading the transcript of mediocre D&D dungeon crawl, which is an unfortunate turn at just the moment that the momentum and force of the story should become undeniable. It is utterly flat and uninteresting on the page.

Still, as I finished Fall, I couldn’t bring myself to condemn the whole book for its ending. It feels less as though the novel is aiming for something underwhelming, and more as though all of its ideas come together to form a story so ambitious that it’s beyond Stephenson’s considerable powers to resolve it. (And anyway, the ending takes up barely a ninth of the full book.)

Ending aside, Fall is a rich and luxurious book. It’s worth the considerable time investment that it demands.