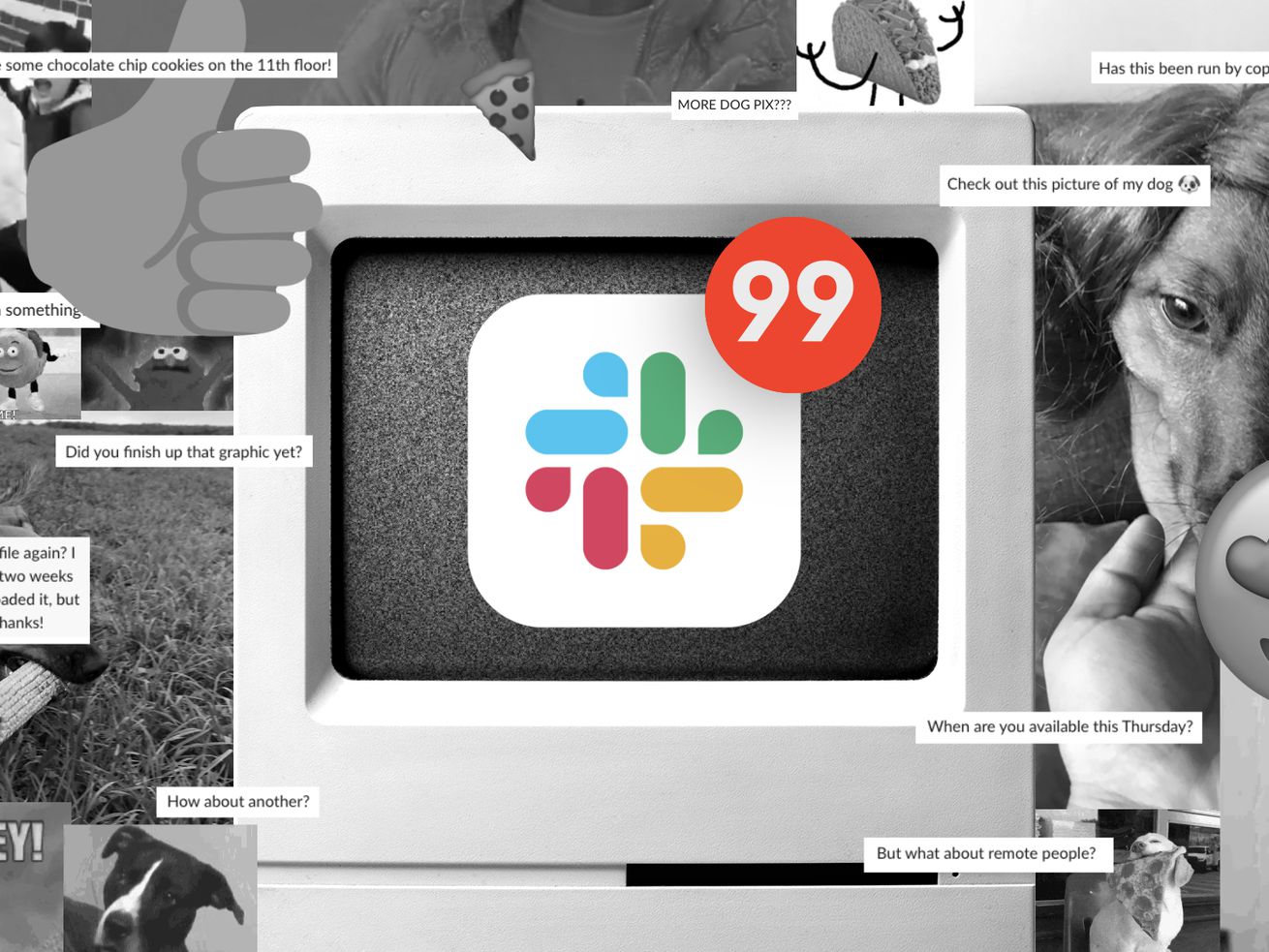 Here’s a look at what the anti-Slacks and Slack apps are trying to solve.

In certain circles — media and tech, specifically — Slack is revered as the workplace communication software tool. In those same circles, it’s also reviled. On one hand, people praise it for enabling their work’s success, while on the other, people accuse it of ruining their productivity and even their lives.

As I wrote last month, the software suffers from its own ease of use. It’s meant to enable its 90,000 paid users — and the 500,000 organizations using the software for free — to collaborate and communicate with their colleagues and navigate a central repository of knowledge. But due to the surfeit of communication Slack creates and the interruptions that causes, the very system meant to facilitate work actually prevents users from getting work done, causing a slew of other issues.

This tension could spell trouble for Slack’s nascent business, and it’s already given rise to numerous anti-Slack competitors, as well as thousands of third-party Slack apps meant to make it better. When the company went public last week, one of the risk factors it listed in its filings included “Real or perceived errors, failures, vulnerabilities, or bugs in Slack could harm our business, results of operations, and financial condition.” The platform also faces competition from tech behemoths — Google G Suite, Microsoft Teams, and Facebook Workplace all share and expand on Slack’s basic premise.

Slack declined to comment to Recode, citing the silent period around its public listing.

The software, of course, isn’t entirely to blame. As I wrote in May, a lot of complaints about Slack’s impact on people’s lives arise from corporate culture and, in some cases, people’s own inability to set boundaries.

Still, companies seem hell-bent on finding a software fix to a problem that software created. Perhaps it has something to do with what Slack in its direct listing filings asserted was a $28 billion market — but that doesn’t preclude the need to make workplace communications and collaboration better.

Here’s a look at what they’re hoping to solve:

For software meant to keep teams across the globe in multiple time zones connected, Slack is pretty terrible at asynchronous communication — a fancy term for letting people work when they’re supposed to work and not ruining their work-life balance because their colleague in Bangkok has a question that can wait.

That’s one of the things the workplace software company Doist is trying to do with Twist, its workplace communication software.

Doist, which also makes the to-do list app Todoist, used to be a Slack customer. However, it found that the tool wasn’t working for its 60 employees spread across 25 countries.

“A lot of the team is in Europe and Asia; I’m on Pacific time,” Brenna Loury, head of marketing at Doist, told Recode. “I’d wake up and have hundreds of messages on Slack to sift through and figure out what’s important and what wasn’t, go through all the GIFs — it was super overwhelming.”

As a result of using Slack, she said, “We stayed connected all the time. That was never a characteristic we wanted.”

These issues guided their thinking when creating Twist, which launched in 2017.

“We wanted to ensure people’s mental health and well-being and make sure that they’re not pushed into feeling like they have to connect at weird hours of the day,” Loury said.

Twist has separate tabs for “threads” and “chats” to enable asynchronous communication.

“In threads, the idea is for it to be longer-form, well-thought-out discussions, rather than just a side conversation,” Loury said. Threads are meant to be documents concerning specific topics that people can add and refer back to. Threads require a subject line, which Loury says helps keep them on topic.

Slack has threads, too, that you can start within a channel or a conversation, but the company added them in 2017 as an afterthought. Sending a message is the easiest and most fundamental task you can do on Slack.

“If you miss something in a channel, you have to trace it back through what is often a nonlinear conversation,” Loury said, referring to what can be a difficult process of figuring out what was said in a chat due to unrelated comments.

Twist also urges users to slow down and temper their expectations for response times.

For example, when you try to send a direct message, you get a notice that says “don’t expect an immediate response,” and that suggests you ask a full question — rather than “you there?” — that can be answered at the recipient’s leisure.

The app also eschews indicators that show when people are online and have read messages, which Twist thinks will help workers feel less pressure to be glued to their devices. Messages appear as a blue indicator dot rather than Slack’s red dot that displays your number of unread messages.

A number of companies are trying to help surface what’s important in Slack, where often the mediocre and the meaningful are indistinguishable — and where searching doesn’t really discern between the two.

The mix of the two can be bad for productivity.

Alex Ackermans, the founder of AntEater Analytics, doesn’t think there’s anything wrong with Slack. But he’s still trying to improve it with AntEater, an app he created that works on top of Slack to help surface important information. Users can ask AntEater who their company’s JavaScript expert is or to find that link for a story they were supposed to have read last week.

Slack seems confident in its search tool, which it listed as one of the platform’s key functionalities in its public filings: “We also leverage machine learning to deliver personalized search results based on user behavior and context, such as the people a user may communicate with most often, the files that may be most relevant to the user and the channels in which the user tends to participate.” (Ironically, Slack is an acronym for “Searchable Log of All Conversation and Knowledge.”)

Ackermans’s app makes it easier to search on Slack because, as Ackermans told Recode, “Regular search doesn’t give the best results. It gives a long list of results.” Instead, AntEater “leverages AI” to create an “organization graph of who knows who and what.” People who’ve talked about a certain subject more will be surfaced higher, as will information that’s more pertinent to your search.

AntEater also creates daily and weekly summaries of what happened in a given channel.

Laura Kurtzberg, a front-end developer at the satellite imagery analysis company Descartes Labs, has become a human version of this for her colleagues when Slack doesn’t cut it. She likes using the software and views its fire hose as a welcome distraction, but says some people at her 100-plus-person company ignore Slack.

Kurtzberg often processes all that information and relays it to those colleagues.

“Basically what I do is, if something is important, I email the people who don’t look at Slack, or I stand up and tell them,” she told Recode.

There’s simply too much noise to begin with

Counterintuitively, the problem with Slack is that its messaging tools work too well by making it too easy to communicate. Indeed, it would be physically impossible for an employee at a big company to read their Slack messages and channels in their entirety, according to data from the productivity analytics company Time Is Ltd.

Software programmer Alicia Liu put it best in a Medium post last year: “By lowering the barrier to initiate communication, the hidden side effect is that Slack has the quiet capacity to exponentially increase communication overhead. Resulting in much more voluminous, lower quality communication.”

That’s why some of Slack’s competitors are giving messages a back seat. The workplace collaboration software Taskade puts projects first. The app is centered on a project page, which combines real-time collaboration tools with workflow functions that help people assign and schedule tasks. The project page has chat and video, but it’s off to the side.

“Every conversation refers back to the project, so there’s less noise,” John Xie, the co-founder and CEO of Taskade, told Recode.

He added, “The conversation is secondary to help you facilitate communication when you need it.”

This, he says, results in fewer messages overall and keeps conversations on track.

Taskade also lets you collapse the various parts of a project — a tree map or a scrum board, for example — so that there’s less going on and you can focus your attention on a specific item.

“The vision is to help people focus, communicate, and collaborate, and remove distraction in a much more organized way,” he said.

Slack has plenty of options: You can turn notifications off and on, and you can tailor when and how you receive messages. The platform is also known for being especially friendly to third-party developers, which offer apps with even more ways to customize Slack to meet your needs.

So perhaps part of users’ issues with Slack stem from not knowing how to properly take advantage of all its options. Importantly, most of these settings (and, of course, the add-on apps) are not the default, which means the majority of people won’t use them.

That’s where training comes in.

Slack referred Recode to its global “customer success” team, which is tasked with onboarding large teams and continued user support. Slack also has extensive documentation on how to use the platform.

But judging from complaints about Slack as well as our conversations with people who use it, those efforts aren’t working.

It’s a tough job, and it might have to do with the broader difficulty of teaching people to correctly operate in digital environments in the first place.

“We don’t know how to organize those companies, not just on Slack,” Time Is Ltd. co-founder and CEO Jan Rezab said, referring to companies that are transitioning to more digital work.

He stresses the need to use data to figure out how best calibrate workplace software within a particular company.

“The problem I see with a lot of workplace software companies, not just Slack, is there’s usually no data-backed best practices,” he said. Companies need to track “how they’re evolving, how to continue building the architecture in order to maximize efficiency.”

Peck says it’s a matter of companies defining their specific needs, including how they want to spend their time, what their culture should be like, and what failure would mean.

“Companies have to figure out exactly what they’re using Slack for,” she said.