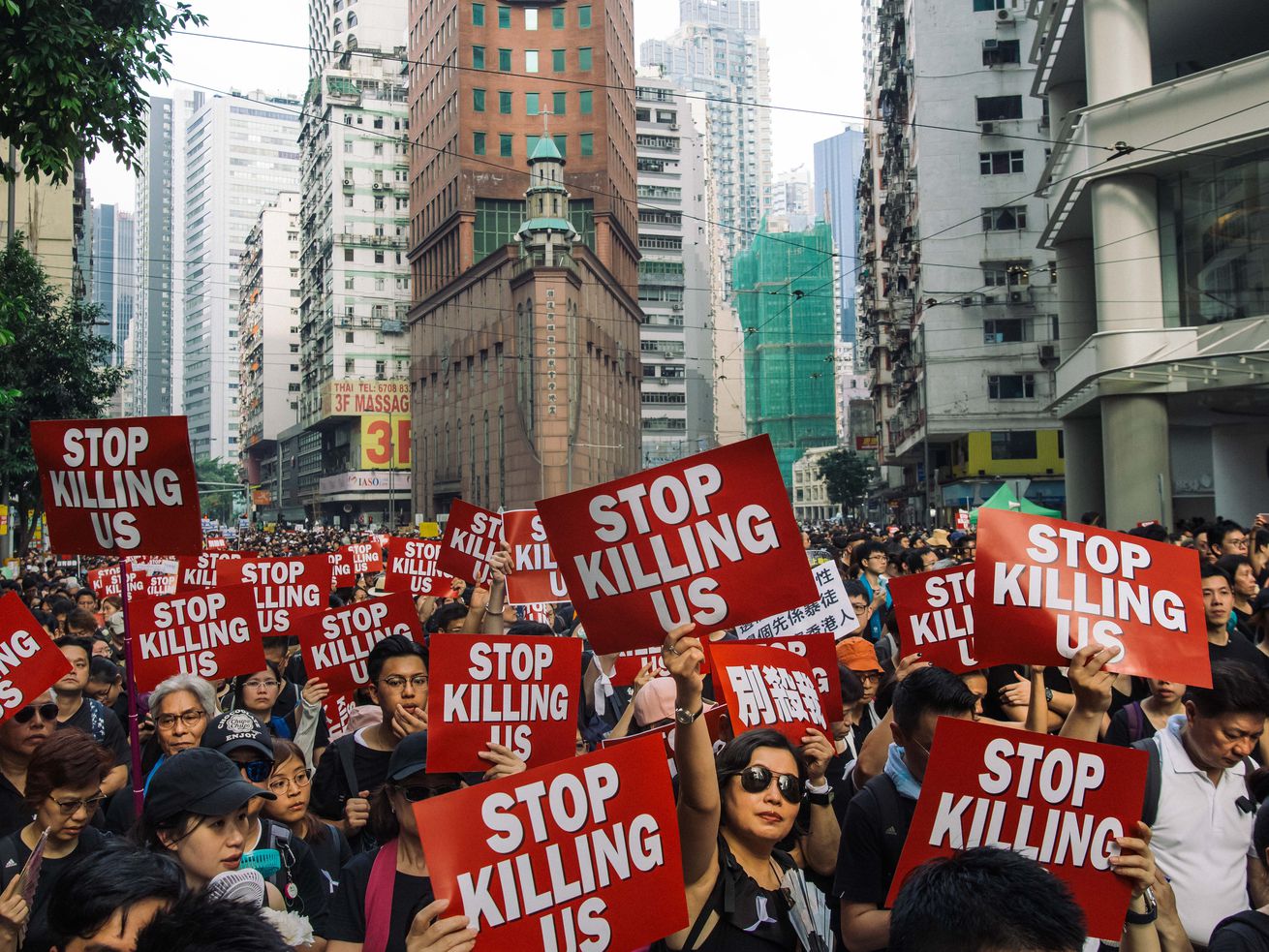 Protesters say they want the bill to be scrapped, and are calling for the city’s chief executive to resign.

Hundreds of thousands of protesters wearing black took to the streets of Hong Kong once again on Sunday to demonstrate against the city’s handling of a controversial bill that would allow Hong Kong citizens to be extradited to mainland China.

Despite the fact that Hong Kong’s chief executive Carrie Lam promised to “indefinitely suspend” the bill on Saturday, protests continued en masse with citizens calling for Lam to step down, for the bill to be permanently tabled, and demanding retribution against the city’s police, who injured at least 70 people in a violent crackdown on Wednesday.

The fact that the protester mobilization was so large even after the government paused its discussions on the bill underscores just how contentious the legislation was and the degree to which Hong Kong’s citizens have come to distrust their government. The raucous demonstrations can also be seen as crucial battlegrounds for keeping democracy alive in the city.

Estimates of turnout on Sunday range from hundreds of thousands to over a million. If the number of protesters did in fact exceed a million, that would mean this Sunday’s protest was roughly as large as the first major protest against the bill last Sunday. That protest was one of the largest in the city’s history, with roughly one in every seven residents attending.

According to Reuters, the demonstrators, which included young families and the elderly, spent much of their day clogging up in the city center. Calls for Lam to “step down” elicited big cheers from the crowd, and protesters also chanted, “Pursue the black police.” Some held banners that said, “Do not shoot, we are HongKonger” in response to police firing rubber bullets and beanbags at protesters during demonstrations on Wednesday.

At the start of the demonstrations, there was a pause to commemorate the protester who died on Saturday from a fall after unfurling a banner on the side of a shopping mall. Demonstrators left flowers at the site of his fall, and as he was wearing a yellow raincoat, some began incorporating the coat into their signs as they marched.

Protesters appeared unsatisfied by Lam’s statement on Saturday in which she expressed “deep sorrow and regret” about the situation, but didn’t explicitly apologize for violence.

She also emphasized she plans to delay and amend the legislation, not drop it. “I believe that we cannot withdraw this bill, or else society will say that this bill was groundless,” the chief executive said.

Many Hong Kong protesters are saying that outcome is not good enough. As Reuters reports:

“Carrie Lam refused to apologize yesterday. It’s unacceptable,” said 16-year-old Catherine Cheung. “She’s a terrible leader who is full of lies … I think she’s only delaying the bill now to trick us into calming down.”

Her classmate, Cindy Yip, said: “That’s why we’re still demanding the bill be scrapped. We don’t trust her anymore. She has to quit.”

This sentiment was echoed by a protester and finance professional who spoke with Vox; asked to be identified as Jason, he said, “What the Hong Kong public currently wants is a total withdrawal of the bill and resignation of the current chief executive — even then then trust in the government may not be fully restored.”

Many protesters see the legislation as a proxy fight over the larger issue of Chinese control over Hong Kong.

Why the bill was so controversial

The suspended extradition bill would have allowed Hong Kong officials to extradite wanted criminal suspects to stand trial in mainland China. The reason that’s so controversial is that Hong Kong is meant to have a criminal justice system that’s independent from China, as Vox’s Rachel Withers explains:

While Hong Kong is technically under the control of the People’s Republic of China, under the terms of the 1997 handover of power from the UK to China, the city is supposed to be allowed to govern itself until 2047 under under a policy known as “one country, two systems.” Essentially, this means that while Hong Kong is under Chinese sovereignty, it is supposed to be free to retain its own political and legal systems. However, Beijing has been pressuring Hong Kong’s leaders to pass laws that bring it more closely in line with the Chinese government, including this recent extradition law, which is sponsored by the pro-Beijing government.

Critics of the law fear that the extradition law would be abused by Chinese authorities to suppress political dissent, and would dramatically curb Hong Kong’s autonomy from the mainland.

Vox’s Alex Ward has has explained why extradition to the mainland is such a chilling prospect for critics of the Chinese government in Hong Kong:

China has increasingly begun kidnapping people it views as criminals, either for their pro-democracy views or for other perceived crimes, but who are outside of its legal jurisdiction. Beijing’s authorities sometimes hold prisoners for years without a proper trial.

In January 2017, for instance, billionaire business executive Xiao Jianhua was forcibly taken out of Hong Kong’s Four Seasons hotel, even though mainland Chinese officials legally can’t do so without the city’s say so. Xiao is now in mainland China, and his fate remains unclear.

All this is to say that plenty of ordinary citizens who harbor dissenting views are worried that this bill could threaten their freedom, both as individuals and as a society. For now, it looks like they’re going to see how far they can take these protests to protect it.

And Chan Chin Ho, who attended Sunday’s demonstration both to protest and provide first aid, told Vox he believes protesters are ready and willing to keep their current level of pressure up for some time: “Hong Kong people generally are willing to do anything to stop this law.”

Jason agreed with that sentiment and said, “There seems to be stronger will and awareness that it will take longer than a week of protests to achieve results this time … I do think Hong Kong people are prepared to continue much longer.”