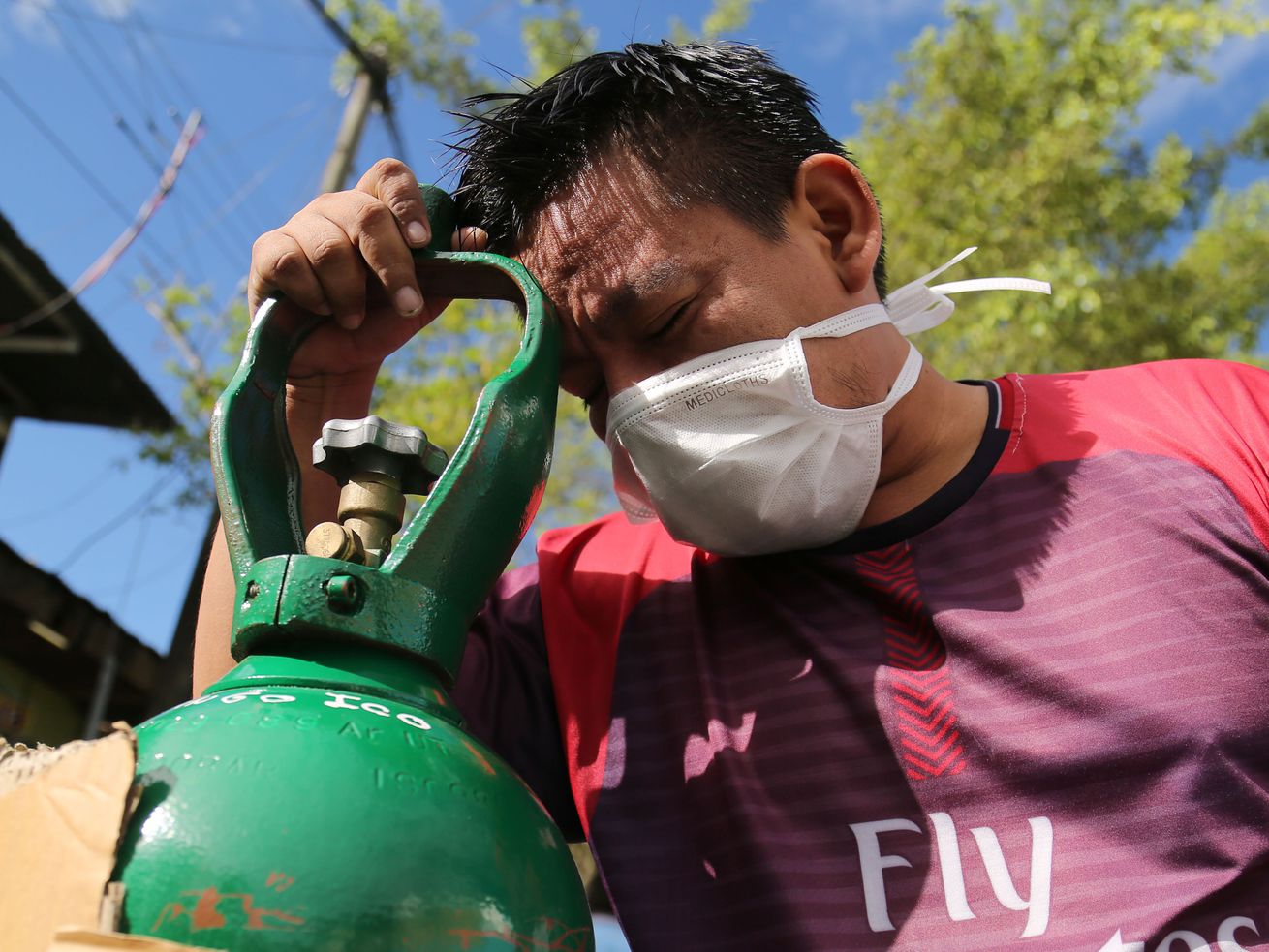 A relative of a Covid-19 patient queues to recharge oxygen tanks for their loved ones at the regional hospital in Iquitos, the largest city in the Peruvian Amazon, on May 14, 2020. | Cesar von Bancels/AFP via Getty Images

Brazil, Peru, and Chile have made South America one of the world’s worst Covid-19 hot spots.

South America has become “a new epicenter” of the coronavirus pandemic, according to the World Health Organization (WHO) — and it looks like the situation there is going to get worse before it gets any better.

The region officially has more than 636,000 confirmed cases and more than 31,000 deaths as of May 25. But due to a dearth of testing and medical facilities, experts believe the outbreak is far bigger than the official numbers show.

Brazil, the continent’s largest and most populous country, also has the largest outbreak, with more than 363,000 confirmed cases — and President Jair Bolsonaro is still refusing to impose aggressive measures to curb the spread.

In Peru, the area’s second-most affected country, many of the nation’s poorest residents are forced to violate government-imposed quarantine measures and curfews in order to buy food for the day or access government stimulus benefits.

And in Chile, the government’s inability to provide enough food for its citizens during the pandemic has led thousands to take to the streets of the capital, Santiago, to protest the lockdown, creating a perfect breeding ground for the virus to spread. President Sebastián Piñera said Sunday that the outbreak has brought the country’s health care system “very close to the limit” of breaking.

Even more concerning, experts say these conditions are unlikely to improve anytime soon.

Many countries in South America have deficient health care systems that struggled to cope with infectious diseases endemic to the region even before the coronavirus hit. Plus, the Southern Hemisphere is headed into winter, the season that tends to make illnesses like the coronavirus more prevalent. Widespread poverty may worsen these problems as the poorest residents struggle to pay for care or defy stay-at-home policies in search of food and funds.

It’s these trends that have Evangelina Martich, an Argentine expert on health policy at the University of Carlos III in Spain, concerned about South America’s immediate future. “The economic and social consequences will be huge,” she told me.

With over half of the region’s total coronavirus cases, Brazil is at the heart of South America’s Covid-19 troubles. Dr. Carissa Etienne, the WHO’s regional director for the Americas, told reporters Tuesday that the situation in the country is bad and projected to get worse.

“We are particularly concerned that the number of new cases reported last week in Brazil was the highest for a seven-day period since the outbreak began,” Etienne said. She also pointed to a coronavirus model showing that “daily deaths are growing exponentially, forecasting a peak of about 1,020 daily deaths by June 22, 2020. By August 1, 2020, a total of 88,300 deaths are projected.”

Much, if not all, of the blame for Brazil’s dire numbers falls squarely at Bolsonaro’s feet.

As Vox’s Jen Kirby has reported, the Brazilian president continues to minimize the disease as “a little flu” and promote the use of unproven drugs like hydroxychloroquine to cure it. Such stances sparked a massive fight between Bolsonaro and state and local leaders who have taken the crisis more seriously, imposing strict lockdown measures in defiance of the president.

The political turmoil, which resulted in the firing of one health minister and the resignation of the minister who replaced him, has led to disastrous results.

Brazil’s public health system was already strained before the pandemic; now, hospital systems in some of its major cities are on the verge of being completely overwhelmed. A lack of adequate supplies and health care equipment has put front-line workers at risk.

Meanwhile, the virus is spreading rapidly among more vulnerable communities, especially in favelas on the outskirts of cities, where social distancing is nearly impossible due to cramped or unsanitary conditions and the number of people who must work every day just to survive. It has also reached remote indigenous communities, which have far from adequate health care.

“We’re very concerned,” Marcos Espinal, head of the communicable diseases department at the Pan American Health Organization, recently told reporters. Brazil “still has a long way to go” before it sees any real signs of progress, he added.

But Brazil isn’t the only country suffering. Peru has also seen an explosion of cases in the last month. As of May 25, it has nearly 120,000 confirmed cases and nearly 3,500 deaths — both of which are the region’s second-largest tallies.

“This situation is not just a health emergency, but a health catastrophe,” Dr. Alfredo Celis of the Medical College of Peru told CNN en Español, adding that “the pandemic has overtaken the response capacity of the health sector.”

Though Peru was one of the first countries in South America to impose a lockdown, many Peruvians, out of necessity, haven’t observed social distancing protocols. That’s because millions in the country are impoverished and must leave their homes every day to find work and buy food. The food part is especially critical, as only 49 percent of Peruvian homes own a fridge or freezer, according to the country’s 2017 Census.

The need to purchase meals for day-of consumption has led to consistently large crowds at markets, forcing thousands into close quarters on a daily basis. “We must endure [the crowds] because there is no other way,” a woman told TV Peru in April. “If not, we will not have food. We have nothing to eat, that’s why we have come here.”

This dilemma, among others, is why Peru’s future looks so troubling. “Peru is projected to have a peak of daily deaths that are estimated at about 168 [per day] by June 30,” Etienne, the WHO’s Americas director, said at Tuesday’s briefing. “And by August 4, 2020, a total of more than 13,000 deaths are projected.”

The situation in Chile, the region’s third-hardest-hit country with 74,000 infected and more than 750 dead, may offer a glimpse into South America’s future.

The country is experiencing an acute food shortage due to a lack of resources to pay for them during the crisis. This sparked mass anti-lockdown protests in the capital last week. At one recent demonstration in El Bosque, one of Santiago’s poorest neighborhoods, people threw rocks at police and burned piles of wood.

“The last weeks we have had a great demand from neighbors for food,” Sadi Melo, mayor of the El Bosque neighborhood and a member of the opposition Socialist Party, told local radio station BioBio. “We are in a very complex situation of hunger and lack of work.”

In response, Piñera said his government would provide 2.5 million baskets of food and other essentials in the coming week, with priority going to “the most vulnerable families.”

Over the weekend, the government also announced a three-month emergency basic income for about a quarter of Chile’s population to help pay for food and other needs. Yet few believe these measures will be enough to solve Chile’s economic problems. Meanwhile, the coronavirus outbreak continues to spread.

Clearly, then, much of South America is in dire straits. The problem is that the crisis is bound to continue — and likely get worse.

Why South America will continue to struggle with the coronavirus

As the number of coronavirus cases ticks up in South America, health care systems on the continent are being overwhelmed.

“Hospital beds, health professionals, and medical supplies in general such as ventilators were already in short supply even before the start of the pandemic,” Sara Niedzwiecki, an expert on health care systems in South America at the University of California Santa Cruz, told me last month. “After Covid-19, the fear of the health system collapsing is very real,” she said, adding that “health service shortage is a challenge for every country in South America.”

South America is also nearing its flu season as the Southern Hemisphere heads into winter. Experts say the flu will increase the number of people seeking medical attention. The region also continues to struggle with other major diseases, including dengue, yellow fever, and chikungunya, all of which require tremendous resources to treat and ultimately eradicate.

It doesn’t help that countries seeking necessary equipment like masks and ventilators are getting outbid by richer countries. And most South American governments are also still reeling from the 2008 financial crisis and are deeply in debt.

Which means that even if regional leaders wanted to spend more money to address the looming crisis, they’d basically have to put themselves in longer-term economic jeopardy. “It’s not easy to take on more debt because these countries are already very indebted,” the University of Chicago’s Michael Albertus told me in April.

The economic situation is only going to get worse as the global economy heads into a recession. Many economies in the region are heavily dependent on commodity exports: oil from Venezuela and Ecuador, precious metals like copper and zinc from Chile, Peru, and Bolivia. Without foreign trade and with few intra-continental sales, national economies and governments will lose the revenue they need to fight off the disease.

All of that is especially bad news for the region’s poor, which make up about 30 percent of the continent’s total population. Their difficulties paying for medical care or purchasing food means they will be the ones to suffer most during the crisis, experts say. Millions live in slums and don’t have free or reliable access to water, making basic safety measures like social distancing and regular hand-washing nearly impossible.

It’s perhaps no surprise, then, that countries in South America are considering relaxing their lockdowns. That may help ease some of the economic pain in the short term, but it could be disastrous in the longer term if the coronavirus is allowed to spread unchecked.

“The number of people who could eventually die in places like Brazil and the rest of South America could far exceed what we’re seeing in the US,” Peter Hotez, dean of the National School of Tropical Medicine at the Baylor College of Medicine, told the Wall Street Journal on Sunday.