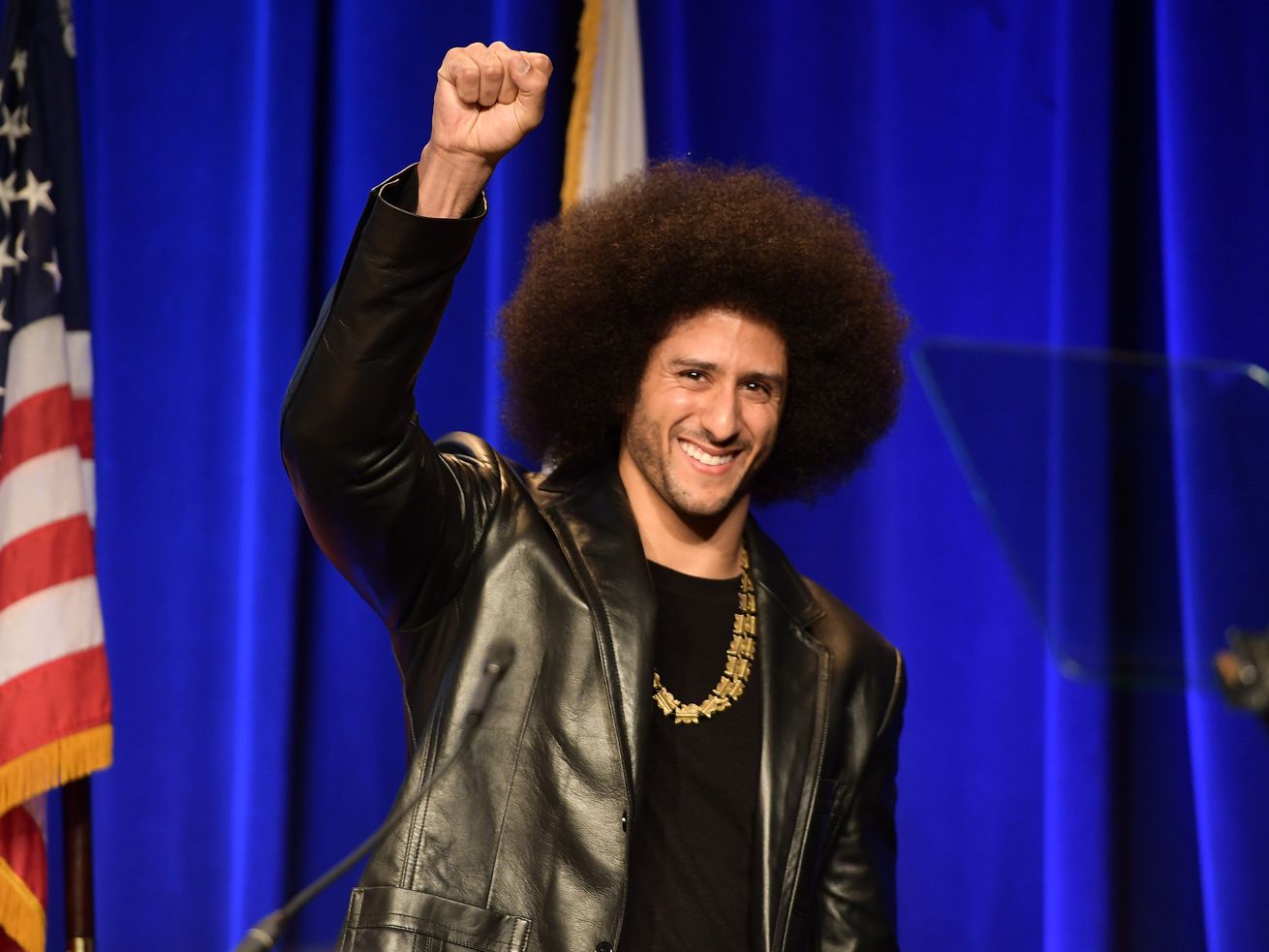 Rule No. 1: You have to actually say something.

Nike announced on Monday that the 30th anniversary of its “Just Do It” campaign would star Colin Kaepernick, the former NFL quarterback who famously began kneeling during the national anthem in order to protest police brutality, igniting a national conversation about race, sports, and the meaning of patriotism.

The ad, which features a close-up of Kaepernick’s face and the tagline “Believe in something. Even if it means sacrificing everything,” was met with praise from fellow Nike athletes like LeBron James and Serena Williams, as well as former CIA Director John Brennan. That “everything” refers to Kaepernick’s professional football career — following his departure from the San Francisco 49ers, he was essentially blackballed from the NFL for his political demonstrations.

Believe in something, even if it means sacrificing everything. #JustDoIt pic.twitter.com/SRWkMIDdaO

The ad was also met with backlash, including a boycott, a trending Twitter hashtag, and viral tweets of customers cutting the Nike swoosh off of their stuff. Meanwhile, Fox News host Tucker Carlson called the campaign “an attack on the country,” while others took issue with the term “sacrifice,” suggesting instead that the campaign should have gone to Pat Tillman, the NFL player who left the league to enlist in the Army in 2002 and was killed in Afghanistan.

Nike’s decision to feature Kaepernick in its campaign is part of a larger trend: Since the 2016 US presidential election, brands — once terrified of controversy — are more and more likely to enter the realm of politics. There’s never been a more popular time to be a brand with an opinion.

And the Kaepernick ad seems to be the result of an essential lesson from the past two years of brands attempting to take a stand in their advertisements: It actually takes a stand.

Since the election, brands have tried to seem “woke”

2017 was the year of corporations taking a stance. By the time the Super Bowl came around, commercials from Coca-Cola and Airbnb were making loose references to the necessity of diversity (Coke’s ad featured voices singing “America the Beautiful” in a variety of languages; Airbnb’s was called “We Accept”), while at the Oscars, Cadillac ran an ad featuring footage of protests with a voiceover saying things like, “We are a nation divided.”

That’s not to say that all these forays succeeded. Later in the spring, there was that Pepsi commercial, which featured a rather milquetoast protest/march/street party full of attractive, racially diverse millennials. It was an aesthetic that many brands were (and still are) co-opting, but it went disastrously wrong when the ad ended up insinuating that police brutality can be solved by Kendall Jenner giving a cop a Pepsi. The Pepsi ad didn’t fail because it used #resistance optics; it failed because it completely undermined the message of the protests.

CEOs also started to seem less afraid — and at times appeared to feel as if they were obligated — to make public statements about political happenings and social issues. After President Trump’s comments on the white supremacist rally in Charlottesville, Virginia, in which he claimed that there were “some very fine people on both sides” and that “not all of those people were white supremacists by any stretch,” Merck CEO Kenneth Frazier dropped out of the president’s American manufacturing council. He issued a statement that said, “As a matter of personal conscience, I feel a responsibility to take a stand against intolerance and extremism.”

Patagonia, meanwhile, which has long been associated with activism, went so far as to file a lawsuit against the Trump administration for reducing the size of two national monuments.

Apparel brands in particular have embraced politics through design. During New York Fashion Week in February 2017, the biggest trend was anti-Trumpism, with models walking down the runway in T-shirts that read, “Nevertheless she persisted,” and one show that began with a speech by the organizers of the Women’s March.

Nike knows exactly what it’s doing with the Kaepernick campaign

Nike’s choice to use Colin Kaepernick’s activism as the face of its campaign isn’t all that surprising — not only does activism often raise a brand’s profile (one study showed that about two-thirds of consumers thought it was at least somewhat important for brands to take a stand on social issues), but it’s well within Nike’s wheelhouse.

Journalist Jemele Hill — who, like Kaepernick, has been a target of Trump — noted that while Kaepernick is still a major draw in sports apparel despite not currently playing for an NFL team, Nike also has a history of working with black athletes, a move that, to some, was at one time considered controversial.

I’m just here to remind folks that last year Colin Kaepernick was in the top 50 in NFL jersey sales, despite not being on a roster. Nike made a business move.

Nike became Nike because it was built on the idea of rebellion. This is the same company that dealt w/ the NBA banning Air Jordans. They made Jordan the face of the company at a time when black men were considered to be a huge risk as pitch men. They aren’t new to this.

That’s likely why the brand figured that the backlash it would receive for choosing Kaepernick would be worth it in the end. And there certainly has been backlash: Some Nike customers responded by performatively burning their Nike apparel or cutting out the logos, which has long been a protest tactic particularly favored by conservative consumers.

Our Soundman just cut the Nike swoosh off his socks. Former marine. Get ready @Nike multiply that by the millions. pic.twitter.com/h8kj6RXe7j

Chris Allieri, a brand expert and founder of the communications firm Mulberry & Astor, told Vox, however, that the average Nike customer will likely be supportive of the campaign. Of those who aren’t, he said, “Consumers are quick to outrage and quick to forget.”

“I think this is one of those decisions where [Nike] did look at positives and negatives and threw that out the window,” he added. “They wanted to be relevant and hit this controversy head on. They did that by putting Kaepernick at the center of the campaign.”

These days, an advertisement won’t make headlines simply for showing a diverse group of people at a vague protest-y setting or making loose claims about supporting diversity. The reason the Nike ad is even newsworthy in the first place is because it doesn’t fall into the trap of attempting to “unite” Kaepernick with the targets of his protests. It’s lionizing Kaepernick for the important work he’s done without flattening his message to align with corporate-speak.

Questions about whether the decision will “pay off” are twofold — there’s the question of how it will affect the Nike brand. Though shares fell more than 2 percent Tuesday morning and the hashtag #NikeBoycott trended on Twitter, that certainly doesn’t mean the ad is a failure. In fact, according to Apex Marketing Group, Nike has received more than $43 million worth of media exposure in the less than 24 hours since the campaign was announced, with the vast majority of coverage either “neutral” or “positive.”

But there’s also the question of whether a brand taking a stance on a social issue will have effects in the real world. When Dick’s Sporting Goods announced it would stop selling guns to people under 21 in response to the school shooting in Parkland, Florida, other stores like Walmart and L.L. Bean followed suit. It’s the kind of trend that can lead to changing ideas about what constitutes common sense, which could end up helping make gun laws stricter.

With its campaign that stars an athlete who gave up his professional career to protest racial injustice in America, Nike could end up doing something similar for that conversation as well. Maybe it already has.