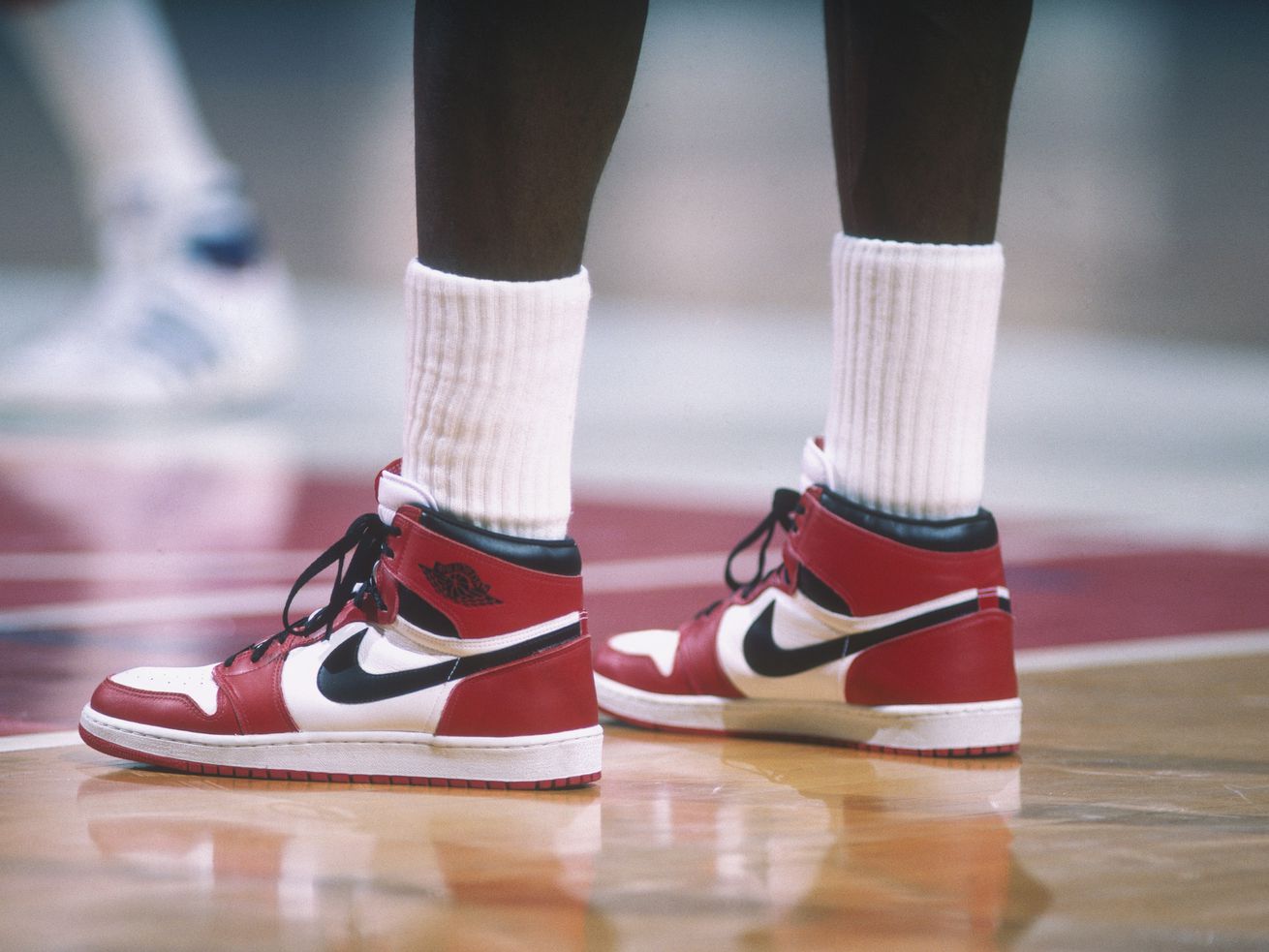 Schools ramped up efforts to police how black youth dressed after reports of sneaker violence spread.

Today, sneaker culture seems almost tame. Suburban dads like Andre Johnson on ABC’s Black-ish have tennis shoe collections, as did sneaker lover Turtle, the least-threatening member of the crew on HBO’s Entourage. But in the late 1980s and early ’90s, the press increasingly linked sneakers and streetwear to youth violence.

Black teens in particular were the focus of news reports about robberies and murders related to expensive sportswear. Although these incidents were far from the norm, they were used to paint African-American youth as immoral and materialistic. They even influenced school officials to crack down on student dress.

Footwear like Air Jordans was described as the attire of gang members and drug dealers, leading to bans in some schools. Today, school dress codes across the country still include passages about gang attire, though the policies rarely define what such clothing is.

The historic outcry about trendy sportswear and the continued bans on gang apparel are a statement on how society views African Americans and, by extension, the clothing linked to them. Just as youth of color have been disproportionately criminalized in schools, so has the style of clothing many of them enjoy.

Preppy fashion was so pervasive in the 1980s that it transcended not only race but age too. I am a testament to the fact. During the Reagan years, I was a little black girl who dressed not altogether differently from what the rich popular dudes wore in John Hughes films. I had penny loafers with actual pennies in them, an Izod cardigan that wouldn’t have looked amiss in Mr. Rogers’s closet, and a stretchy canvas belt with metal hoops in the center instead of a buckle.

It wasn’t that I was preppier than the norm, or that my mother was, since she dressed me. It was that loads of Americans dressed this way, from little kids like me then to high school students and adults.

The preppy look was so dominant that school principals tasked with enforcing dress codes in the ’60s and ’70s, a thankless job considering the dominant trends of long hair for guys and micro-mini skirts for girls, started to relax. In 1981, Iowa’s conservative Des Moines Independent School District stopped policing how students dressed because they all looked like Alex P. Keaton clones.

“We think there are more important things to do with our time and efforts than enforce a dress code,” a district spokesperson told the Associated Press at the time.

This marked a sea change for the district, which routinely sent students home in the 1950s for the slightest infractions, like not wearing belts. And in 1969, Des Moines Independent famously lost a Supreme Court case for violating students’ First Amendment rights by suspending five teens for wearing black armbands to school to protest the Vietnam War.

That the district stopped hassling kids about their appearance in the ’80s didn’t mean it had adopted a liberal approach to student dress. Mostly, it reflected the growing trend of youth who’d taken such a liking to preppy styles that they self-policed their attire. The trend even sparked articles like the Associated Press’s 1981 piece “School Dress Grows More Conservative.”

But as the decade ended, prep was on the decline. The magnificent athleticism of Michael Jordan had transformed basketball; he played the game with such grace that everyone wanted his shoes — Air Jordans — ushering in a wave of expensive sportswear and the sneakerheads who coveted them.

While devotees of gym shoes and streetwear certainly existed before the late ’80s (Run-D.M.C. recorded their hit “My Adidas” in 1985), Jordans were so in demand that a small but notorious subset of youth were willing to do whatever it took to get them, including rob, fight, or kill for them. And fellow students were typically the victims of these crimes. As a result, school principals started to ban pricey sportswear, paving the way for some of the dress code and uniform policies on the books today.

The press largely painted sneakerheads as violent and materialistic

Sportswear earned a loyal following of enthusiasts, including young people willing to break the law to get their hands on it. By the late ’80s, reports of students being robbed or killed for their sneakers, baseball caps, or jackets spread. In 1988, Robin Oden, then the principal of Detroit’s Mumford High School, announced plans to ban expensive sportswear and streetwear, including Air Jordans and comparable items from Fila, Adidas, and Troop.

“Teenagers in Detroit have been dropping like flies,” Oden told the Chicago Tribune. “They have been shot for things such as a shirt or a pair of gym shoes. This is not unique to Mumford or to Detroit public schools, but it reached a point where I felt I had to do something.”

The Tribune reported how one Detroit teen had been shot, beaten, and robbed of his Troop leather jacket. The paper also described how Oden had to break up a fight involving a student who’d accused another of stealing his Troop jacket and Troop gym shoes. Despite Oden’s “flies” comment, these incidents were largely rare, the principal was fed up; he outlined plans for a dress code that would ban these items and discussed the possibility of implementing student uniforms after that.

“I’m not saying that anyone who wears these clothes is involved in drugs,” Oden said, “but for some young people, looking the part makes them feel like more of a man.”

Two years later, Sports Illustrated ran a cover story called “Your Sneakers or Your Life.” The cover image showed two brown hands, a pair of Air Jordans in one and a gun in the other. The article began with the cautionary tale of a teen strangled to death for his Air Jordans, and pointed the finger at Jordan, then-Nike pitch person Spike Lee, and Nike itself for such tragedies.

While the piece didn’t put a number on how many youth were killed for sportswear at the time, it included estimates from Atlanta and Chicago police about the number of robberies the departments worked involving high-end sportswear. Atlanta Police estimated that it had handled more than 50 such robberies over a four-month period in 1990, while Chicago Police estimated it worked 50 robberies involving jackets and roughly a dozen involving gym shoes monthly.

Citing concerns about such incidents and about sportswear’s growing popularity with gang members, schools began to modify their dress codes. In 1994, California’s Long Beach Unified School District made student uniforms mandatory, the first district in the nation to do so. Other school districts soon followed. But along with the new dress codes came moralizing about the “youth of today,” particularly black youth. At best, they were characterized as a pitiful group, using clothing to get status. At worst, they were accused of being morally bankrupt.

“Something is very wrong with a society that has created an underclass that is slipping into economic and moral oblivion, an underclass in which pieces of rubber and plastic held together by shoelaces are sometimes worth more than a human life,” Sports Illustrated argued in its 1990 story.

Not mentioned in SI’s story, though is the fact that historically, human beings have killed for all sorts of things. In the early 1900s, Westerners enslaved, tortured, and killed the Amazon’s indigenous peoples to acquire latex (a type of rubber). Three centuries earlier, the Dutch slaughtered the people of Indonesia’s Banda Islands in quest of nutmeg, which historian Michael Krondl described as the iPhone of the 17th century.

The iPhone of the 21st century has sparked violence as well. But consumers of the gadgets haven’t faced the sort of character assassination that fans of Jordans did, despite the fact that the vast majority weren’t committing crimes for the shoes.

I bought my first pair of Jordans in the early 1990s, when I was 13, after saving up for them with earnings from my summer job at a preschool. They were gleaming white with purple, teal, and black accents, a color scheme just girly enough for me to pair with my typical tween wardrobe. I had no desire to look like a gang member or a drug dealer; I simply loved Michael Jordan, like many kids did. But in the press, black teens who craved Air Jordans were portrayed as thieving, murdering thugs.

Much of the criticism of sneakerheads paralleled Ronald Reagan’s famous tale of a Cadillac-driving “welfare queen,” and the message was clear: Black people had a shameless lust for the finer things in life that they’d neither earned nor deserved. That perspective was a form of gaslighting, shaming the marginalized for being materialistic in a society built on capitalism and slave labor. And fears about gang dress continue to permeate school dress codes today.

A review of state education codes across the country shows bans against gang attire are a recurring theme. But the codes don’t define exactly what gang attire is, since it is highly mutable. At times, gangs have been linked to specific colors or even the attire of certain sports teams.

Todd DeMitchell, a University of New Hampshire professor of education and justice studies, said that school bans on gang attire are often unconstitutional. “They can be vague or overbroad,” he said. “Not everyone who wears red or blue is in a gang.” And often, the attire schools consider to be gang-related, like high-end sportswear, reflects styles of dress that many youth of color enjoy.

Stories about sneaker violence still surface on occasion. Last year, Gothamist reported that a pair of sneaker thieves had robbed six people for Yeezys, Kanye West’s brand of shoes that Adidas has mostly released in limited numbers. In 2015, GQ published a video stating that 1,200 people are killed each year for gym shoes; later, the filmmaker who cited that figure walked it back.

And many of the articles that have sounded the alarm about the issue — which, again, is mostly limited to isolated incidents — have merely served to pathologize, mischaracterize, and generalize youth of color, perpetrators and victims alike. When black kids gravitate toward a product and a few turn to crime to get it, that doesn’t make the item any more criminal than an iPhone. Yet sensationalistic news stories and school dress codes that ban unspecified “gang attire” often fail to make this distinction.