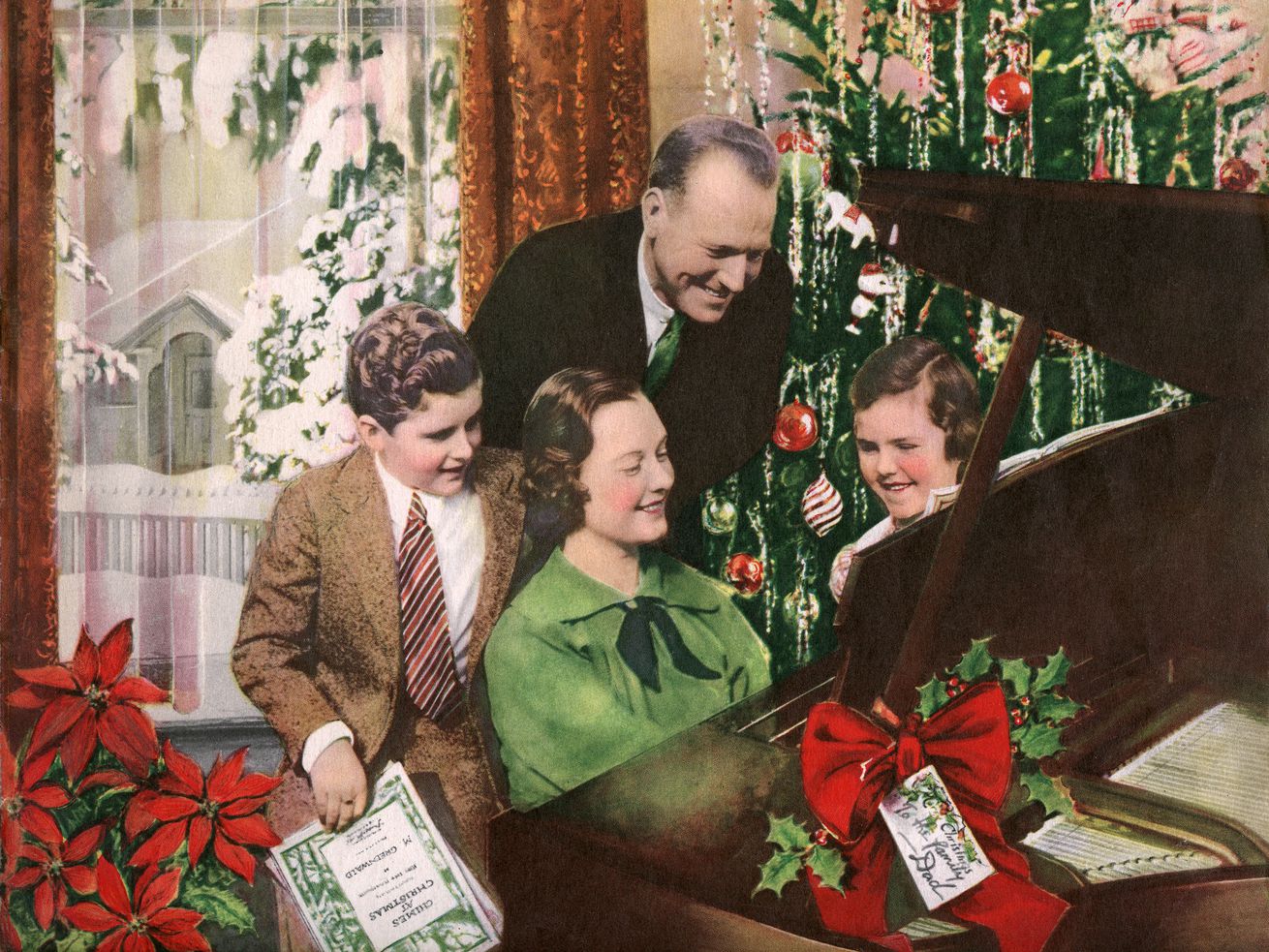 Plot twist: During the Renaissance, it was performed in the summertime and may have been considered funny.

If you would like to terrify unsuspecting guests at your next holiday gathering, all you need to do is add the song “Coventry Carol” to the playlist. It doesn’t matter which version — the Pentatonix one is just as eerie and mood-dampening as Sufjan Stevens’s rendition, which is only marginally less horrifying than Annie Lennox’s.

That’s mostly because “Coventry Carol” is ultimately a song about babies who are about to be murdered. But even before any words are uttered, you immediately get the sense that this will not be a Christmas song involving sleigh rides or Santa Claus or receiving a present, unless that present is a huge bummer.

Listen below and you’ll hear what I mean.

Are you getting the sense that something very, very bad is about to happen? Correct! The slow cadence will do that, as will its ominous melody in minor key.

Once the lyrics begin, things do not get less bleak. Here is a sampling of some of the words you will hear when you listen to “Coventry Carol”:

Herod the King / In his raging / Charged he hath this day
His men of might / In his own sight / All children young to slay
Then woe is me / Poor child for thee / And ever mourn and say
For thy parting / Nor say nor sing / By-by, lullay, lullay

Indeed, “Coventry Carol” is a reference to the Massacre of the Innocents, an event described in the Gospel of Matthew. In it, King Herod orders the execution of all male children in Bethlehem under the age of 2. The story goes that Herod did this because he heard of the birth of a baby who would become the king of all Jews — news that was relayed to him by the Magi (or the three wise men referred to in the carol “We Three Kings”). Yet Joseph, having been warned by an angel, escapes Bethlehem with Mary and the newborn Jesus to Egypt. The song, then, is a lullaby supposedly sung by the mothers of Bethlehem to their doomed sons.

The Massacre of the Innocents is widely understood to have never actually happened — the Gospel of Matthew is the only reference to the story, and it is likely a mashup of several different moments from Hebrew and Christian Scripture, such as the killing of the children of Egypt at Passover and the weeping of Rachel for her children, according to one medievalist I spoke to. But it is still an important part of certain retellings of the Nativity, the story of Jesus’s birth and the reason Christians celebrate Christmas. These retellings, which occurred from the late Middle Ages through the early Renaissance, are where “Coventry Carol” comes from, and why this incredibly dismal song is even remotely Christmassy.

“Coventry Carol” was originally performed at a raucous summer festival

From as early as 1392 to 1579, merchant guilds in Coventry, England, would produce annual plays for the feast of Corpus Christi, which occurred in midsummer. Though similar pageants were held in other English towns like York and Chester, as well as in France, Spain, and Germany, the Coventry plays were much larger and lasted longer than others, and thereby were a bigger deal for audiences. The plays would dramatize various biblical stories, with local shearmen (who would shear wool from sheep) and tailors’ guilds putting on the nativity.

“Medieval drama was in the business of staging what was considered the entire history of the world represented in scripture, from Creation to Doomsday,” explains Daisy Black, a medievalist at the University of Wolverhampton. “Unlike our modern nativity plays, which tend to safely end with the visit of the Magi, they carried on to the massacre, showing the very human cost of Christ’s birth.”

“Coventry Carol” was the second of three songs in the nativity play, and though it was performed from the late 14th century through the 16th, the iteration that we know today wasn’t written until the 1530s by Robert Croo, an organizer of that era’s pageants. It covered the events from the prophecies of Jesus’s birth, the Annunciation (the announcement from the Archangel Gabriel to the Virgin Mary that she would give birth to the son of God), and finally the Massacre of the Innocents.

But even though “Coventry Carol” is theoretically very dark, it may have been quite the opposite for audiences of the time period. That’s because medieval drama in general was, above all, funny.

“Herod in the Coventry play is clearly a ‘star’ villain character,” says Black. “Much of the pageant is all about his boasting about his own supremacy, threatening the audience, and showing off his ‘gorgeous array’ [of clothing], which became known for being so over-the-top that Shakespeare had Hamlet warn his own actors not to out-Herod Herod. I sometimes see him as a rather incompetent version of The Rocky Horror Picture Show’s Frank N. Furter, though when I did a workshop with students last year, they characterized him as a sort of medieval Donald Trump.”

Plus, everyone was probably drunk anyway. Andrew Albin, a professor of medieval studies at Fordham University who specializes in historical sound, says, “Part of the fun of going to these plays is seeing how good they’re doing it this year versus last year — seeing if Jesus falls off the cross this year, seeing who gets drunk and flubs their lines, because you’re in the middle of summer and you have to stay hydrated, and the best way to stay hydrated in a medieval city is to drink beer.”

Even the singing of “Coventry Carol” might have been a setup for jokes. “Matthew Sergi, [a professor] at the University of Toronto, has suggested that what that play is actually about is the slapstick of, like, dead baby jokes,” Albin explains. “If you look at the text of the play, what’s playing out at this moment when [Herod’s] soldiers are coming up and stealing the children from the arms of the wives, the wives all of a sudden turn on the soldiers and start beating them up.

“So in a way, this isn’t a somber moment, it’s a comic moment: the comedy of, ‘How do you get the baby out of this woman’s hands and how extreme are you going to be with ripping it limb from limb?’ It’s the inversion of gender roles, and in English drama of the period, that’s always a comic move.”

“Coventry Carol” sounds sad to modern ears, but it might not have in the Renaissance

This doesn’t change the fact that even without the lyrics, “Coventry Carol” just sounds bleak, since it’s composed in a minor key and has a slow, solemn tempo.

But to medieval ears, it probably didn’t sound that spooky. Today, minor key tends to signify “it’s time to be sad now.” But when the current iteration of the song was written around the 1530s, people didn’t necessarily assume a minor key meant a song was a sad one — in fact, the idea of major and minor keys wouldn’t be fully developed until Bach and his contemporaries in the 18th century, according to Albin.

Albin also notes that the strange sound of “Coventry Carol” also likely has to do with how the song switches meter unpredictably — meaning some measures are three beats and some are two — which we aren’t used to hearing in music. There’s also the song’s notable use of a Picardy third, which occurs when a major chord comes at the end of a musical section in a minor key (you can hear it at the end of certain “lullays”). Picardy thirds, in general, create a sort of strange cognitive dissonance for the listener. (The end of “Killing Me Softly” is one of the most famous examples.)

But despite the fact that “Coventry Carol” sounds rather medieval to us, its composition is very much a product of its time — which was well after the medieval era ended in around 1400. “That style was very much a part of the reformation of church music that happened at the time of the Reformation,” says Albin. In particular, after 1517, reformers in England shifted toward music that was less florid (and less Latin) than traditional Catholic liturgical music.

Traditional Catholic liturgical music “had the stink of popeishness,” he adds, “so in order to get rid of that, they shifted toward this much simpler [formula]: Every voice changes pitches at the same time and speaks the same words at the same time, so that everybody can understand the text and the text is in English. The ‘Coventry Carol’ is in that style, and so it very much reflects the religious politics of that time.”

The Protestant Tudor monarchy eventually banned the performance of the Coventry Plays due to their Catholic origins, but a transcription of the text of the play by historian Thomas Sharp in 1817, and then a revised edition in 1825 that included the music, is the only reason it survives — the 1530s-era script by Croo was destroyed in a fire in 1879.

Though it still certainly isn’t among the most well-known of Christmas songs, “Coventry Carol” became more widely known in 1940, after Coventry was bombed by the German Air Force during World War II. On Christmas Day, the BBC broadcast the provost of the Coventry Cathedral giving a speech in which he attempted to forgive those who had carried out the attack. Afterward, the choir sang “Coventry Carol” in the cathedral’s ruins, with the song’s melancholy subject matter taking on new meaning.

Since then, there’s been interest in reviving the Corpus Christi plays throughout England. Starting in 1951 with the Festival of Britain, performers in York and Chester have continued to put on their own version of the medieval and Renaissance plays every few years.

And while “Coventry Carol” is only one part of a storied history of somewhat horrifying Christmas songs — “Do You Hear What I Hear?” was apparently a reference to the Cuban missile crisis; “Do They Know It’s Christmas?” and “Baby, It’s Cold Outside” have both sparked controversy; and that’s to say nothing of the crime against art that is “The Christmas Shoes” — most of them are relatively modern. That’s what sets “Coventry Carol” apart: It’s been haunting otherwise festive atmospheres for literal centuries!

But the next time you hear it, try this: Envision hammered Brits in the Renaissance doing slapstick comedy. Then, as now, it’s the only way to make “Coventry Carol” a thing of joy.