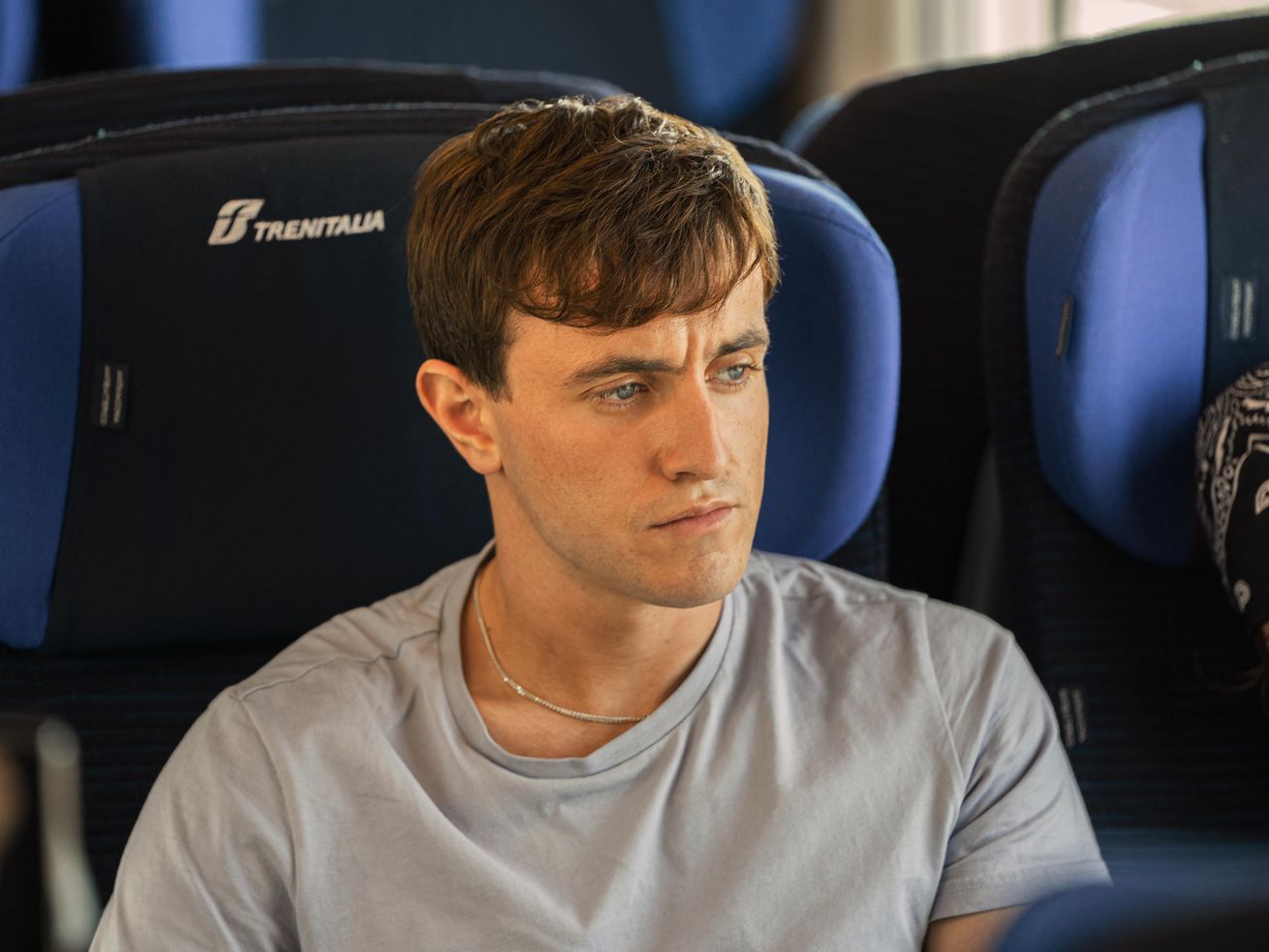 From Normal People to TikTok, the internet is obsessed with men wearing thin chains.

Since the release of Normal People, the steamy adaptation of Sally Rooney’s bestselling novel, the silver chain that dangles ever so slightly from actor Paul Mescal’s neck has become hot fodder for internet discourse.

“i finished normal people and I am here to report that connell’s chain is now the only thing tethering me to this life,” reads one tweet. “what i would do to be the silver chain around connell’s neck,” reads another.

Chains are not, by any means, a new accessory. They’ve been worn since ancient times, and you’ve likely seen iterations before on celebrities (Jay-Z, Migos, Timothée Chalamet, and Harry Styles are frequent chain-wearers), in films (Matt Damon in Good Will Hunting and John Travolta in Saturday Night Fever), or on your fashion-forward male friends. Their popularity in mainstream American fashion is largely attributed to their roots in hip-hop and black culture.

What is new about the chain is the skyrocketing levels of online lust it’s invoking, and how this thin piece of metal became the sexiest male accessory of 2020.

On TikTok, the accessory is somewhat of a meme: A teenage boy (usually good-looking and with higher-than-average self-esteem) will, sometimes shirtlessly, dangle his chain suggestively in front of the camera to the song “Slow Down” by Selena Gomez. In quarantine, girls have filmed TikToks dangling a chain necklace on their foreheads, simulating how the accessory sways in their face during sex, as a joke about their perpetual horniness. Its popularity on TikTok and among Generation Z can be partially attributed to the e-boy subculture and aesthetic, which features bulky, punk-style silver chains.

Yet the neck chain has been a staple accessory in the men’s fashion world for years, if not decades. “I like wearing a chain because it reminds me of a 1970s Elliott Gould leading man kind of accessory,” GQ senior style editor Sam Schube told me. “It’s a cool thing to throw on with a T-shirt and a pair of blue jeans. You feel 10 percent more dressed than you would otherwise be.”

The frenzied thirst surrounding Connell’s chain is slightly perplexing to Schube. “Chains were popping up on GQ’s radar a couple of years ago,” he said. “We’d see Timothée Chalamet wearing his very delicate gold chain, and there were skaters that were influential in the fashion universe rocking a finer, delicate chain. That was definitely a moment.”

Throughout antiquity and most of history, neck chains were primarily worn by royalty and the rich. The Greeks and Romans, among other early cultures, wore gold and silver necklaces with decorative pendants and semi-precious stones, and in the Byzantine era, chains were commonly adorned with crosses to showcase religious piety.

In modern times, though, jewelry has become so easily accessible that these accessories have evolved into a hallmark of someone’s personal style and identity, while also serving as an indicator of their wealth, social status, or religion. In The Sopranos, for instance, many recurring characters wear gold chains with crosses to display their Catholic faith — a jewelry tradition that has existed since the Middle Ages.

Over the decades, various styles of chains have gone in and out of style in the US: Rappers and hip-hop artists in the ’70s and ’80s draped themselves with flashy and extravagant jewelry — bling — which became a mainstay of hip-hop culture and style in the 2000s and beyond. One of the most identifiable types of bling was gold and diamond chains, worn by artists to symbolize their wealth and upwardly mobile status. “The chain’s popularity is almost entirely due to hip-hop culture,” Schube told me.

Today, instead of gravitating toward heavyweight bling, most celebrities and fashion influencers have opted for finer, more subtle chains. Thanks to celebrity fashion, the forces of TikTok, and now Normal People, the neck chain has evolved into a mainstream internet fad — obsessed over by chain enthusiasts and observers alike. In her aptly titled piece “Why are those little neck chains so sexy?” Vice’s Annie Lord wrote, “One does not want to over intellectualise the chain. It is just accidentally, indescribably hot. … But it is worth noting that, within the thin strand of silver, lies a whole sign system of power, bad boy behavior, and effeminate glamour.”

(After encountering one too many chain-dangle TikToks, I now associate the trend with the “I’m trying too hard to be a fuckboy” aesthetic, which isn’t entirely true for all chain-wearers but destroys the mystique of the accessory in my eyes. On a recent FaceTime call with my friend Steven, who recently acquired a thin gold chain, he asked me if his newfound accessory was “too fuckboy-ish.” Unfortunately, it was.)

The necklace in Normal People, on the other hand, was intended to signify Connell’s working-class background. The chain was briefly referred to in the novel by Marianne’s best friend as “Argos chic,” in reference to a retailer that’s described as the United Kingdom’s equivalent of Target or Walmart.

Costume designer Lorna Marie Mugan revealed on a radio show that Paul Mescal, the actor who plays Connell, insisted on wearing a chain for his character. “We quickly went out and got a selection of chains, gave him a choice, and he picked that,” Mugan said. “It was just on him and that was it. We didn’t think about it too much.”

In an interview with Refinery29, Mugan added that Connell’s chain is a constant of his character: “He carries it right through the story. And Marianne says she recognizes it because he had it in school, so it was crucial that he bring it right the way through. He has nothing else really that stands out.”

“The necklace maintains this social narrative through the many scenes where clothing isn’t readily available as a prop,” Caroline Stevenson, head of cultural and historical studies at the London College of Fashion, wrote to me via email. “In contrast to Marianne’s delicate silver earrings, the silver chain necklace reminds us of the social divisions between them.”

Connell’s neck chain, Stevenson said, is reminiscent of the 1980s New Man — “hard-bodied on the outside, but soft, caring, and sensitive on the inside” — and because the accessory is so plainly unadorned, it’s natural for audiences to assume it must carry some deeper meaning.

“Men wearing meaningful jewelry usually signifies the commitments they’ve made and values they place on family, heritage, and status,” Stevenson concluded. “For this reason, Connell’s chain — cheap and silver — doesn’t represent aspirational values beyond his working-class status. … Rather the necklace is a potent signifier of Connell’s strong alignment with his family and community.”