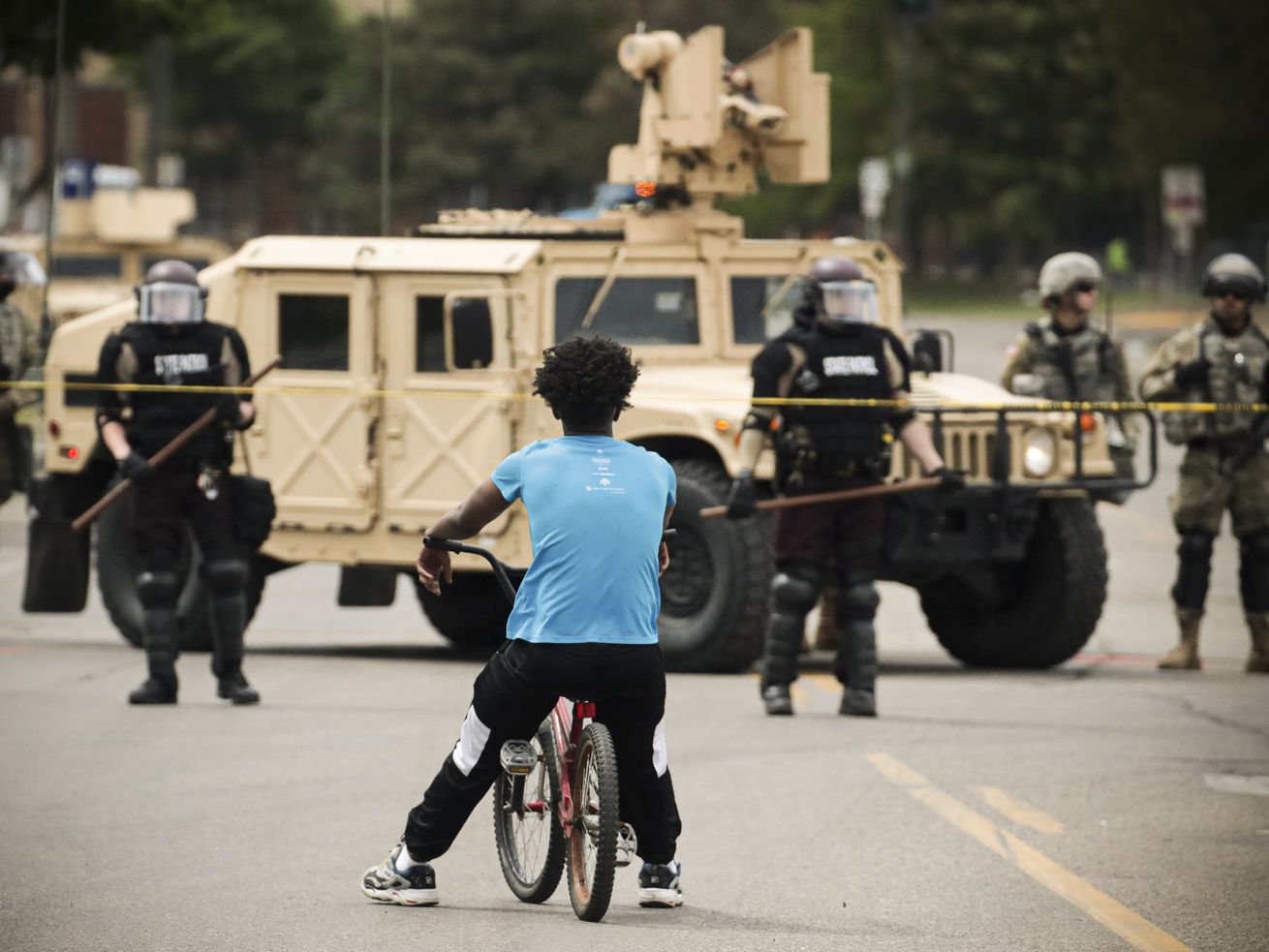 The National Guard has been activated across Minneapolis and St. Paul. | Scott Olson/Getty Images

Minnesota Gov. Tim Walz activated the state’s National Guard on Thursday afternoon to “help provide security and restore safety” amid the ongoing protests in Minneapolis against police violence in response to the death of George Floyd — a sign the state’s leaders feel they need more help to calm the demonstrations.

About 500 National Guard members, drawn from military police, field artillery, and transportation companies, will assist local governments in Minneapolis and St. Paul and their neighboring areas with handling the protests, which have occasionally turned violent.

Thousands have taken to the streets this week in response to the death of Floyd, a 46-year-old black man who died Monday after a Minneapolis police officer knelt on his neck for more than seven minutes. Floyd was both unarmed and handcuffed at the time, and could clearly be heard pleading for air and saying he couldn’t breathe on video taken by bystanders at the scene.

Though the majority of the protests have been peaceful, some demonstrators have engaged in looting local businesses and damaging property, including setting fire to a local police station (the station had been evacuated before the protesters entered and started the fire). Police have responded to the demonstrations with tear gas, flash-bang grenades, rubber bullets, and arrests.

According to Army Maj. Scott Hawks, a spokesperson for the Minnesota National Guard, the members have been “activated to protect life, preserve property, and to ensure the right of people to peacefully demonstrate in Minneapolis and its surrounding communities.” The length of the National Guard’s deployment is “undetermined at this time,” he told me.

The National Guard has arrived on the scene. They are in Minneapolis and fully prepared. George Floyd will not have died in vain. Respect his memory!!!

Below is a quick guide on what we can expect to see the Minnesota National Guard doing over the coming days.

“The Cities of Minneapolis and St. Paul have activated their emergency operations plan, and the Mayors of both cities have requested the assistance of the Minnesota National Guard to help provide security and restore safety,” it reads.

The order also grants the Guard’s leadership the authority to activate “the personnel, equipment, and facilities needed to support emergency operations and response.”

This may seem scary — like Minnesota just authorized the military to come in and start shooting — but that’s far from what’s happening.

A state’s National Guard is made up of people from that state. National Guard members are farmers, coal miners, doctors, lawyers, teachers, postal workers, grocery store clerks, and more. On occasion, mainly on weekends, they’ll train with their unit. Most of the time, though, those in the Guard are doing their day jobs.

In other words, this isn’t the Minnesota governor sending in America’s military to impose martial law on the Twin Cities. This is the governor sending in local people to assist the local government and police and to help calm the situation as best they can.

Law enforcement uniforms can be hard to tell apart. Not everyone you see in camouflage is part of the @MNNationalGuard. Our Guardsmen have @USArmy and @usairforce patches and wear U.S. flags on their sleeves to identify them. We live in your communities and we are here to help. pic.twitter.com/sDPmCJFzfc

When it comes to the specifics of what Minnesota’s National Guard members might be tasked with in the coming days, another spokesperson for the Guard, Lara Houston, told me “our missions are changing as the situation changes. It’s really whatever we are tasked to do by the governor’s office.”

But Hawks, the other Guard spokesperson, told me the roughly 500 activated members are “assisting and escorting firefighters to sites and providing them security as those firefighters do their work,” as well as “forming lines between protesters and sites that are at risk of being harmed.”

We are here with the Minneapolis Fire Department ready to assist so they can safely do their mission. pic.twitter.com/FjsCJ5B8d0

Importantly, all 500 members won’t be out in the field at once — it’s a rotational number, Hawks noted. While some work, others will be at home resting until their next shift. If the state should need more assistance, Minnesota’s National Guard has another 12,500 or so members available to be mobilized.

It’s possible Guard members will be asked to do more down the line as the situation changes — like clean up debris or provide medical care for injured people — but there’s no indication what those new authorities would even be. “We have many plans in place and we are waiting to see what the requests and requirements are,” Hawks said.

It’ll be up to the governor to decide how long the Guard’s help will be required, but it’s likely he’ll deactivate the force whenever he feels local government and law enforcement officials can handle the situation on their own.

What the Minnesota National Guard isn’t doing, at least not yet

You might have heard of “posse comitatus,” a long-standing law that bars the US military from being used to enforce domestic law in the country in most cases.

That law doesn’t apply to the National Guard when it’s operating under state authority, or if the president calls on it under federal authority to do things like quelling an unlawful domestic insurrection. Which means that National Guard troops can actually carry out domestic law enforcement operations, including arresting people.

But, experts note, that’s not likely to happen unless there’s a massive breakdown in societal order. “It’s politically not desirable, so governors don’t want to do that kind of thing,” Lindsay Cohn, a Naval War College expert on the National Guard, told me in March about the Guard’s general guidelines.

Hawks, the Minnesota National Guard spokesperson, told me that, as of now, members have “no arrest authority.” However, the 500 activated members are working under the direct supervision of the Minnesota State Patrol. It’s therefore possible that a State Patrol commander could ask a Guard member to arrest somebody down the line, but that isn’t happening — yet.

Even if National Guard members were assisting with arrests, it’d be a far cry from the institution of martial law. “Martial law is when civilian authority is incapacitated and cannot function,” Cohn told me in March, and a military officer is in control of the three functions of government (legislative, executive, and judicial).

Minnesota sending the National Guard into the Twin Cities, then, is a sign that the situation has gotten a little out of hand for local law enforcement. It doesn’t mean the US military is swooping in to subjugate the people.

The question now will be if the Guard can do its job professionally and safely while respecting the protesters’ rights. That, more than anything, may be the hardest part of the whole deployment.