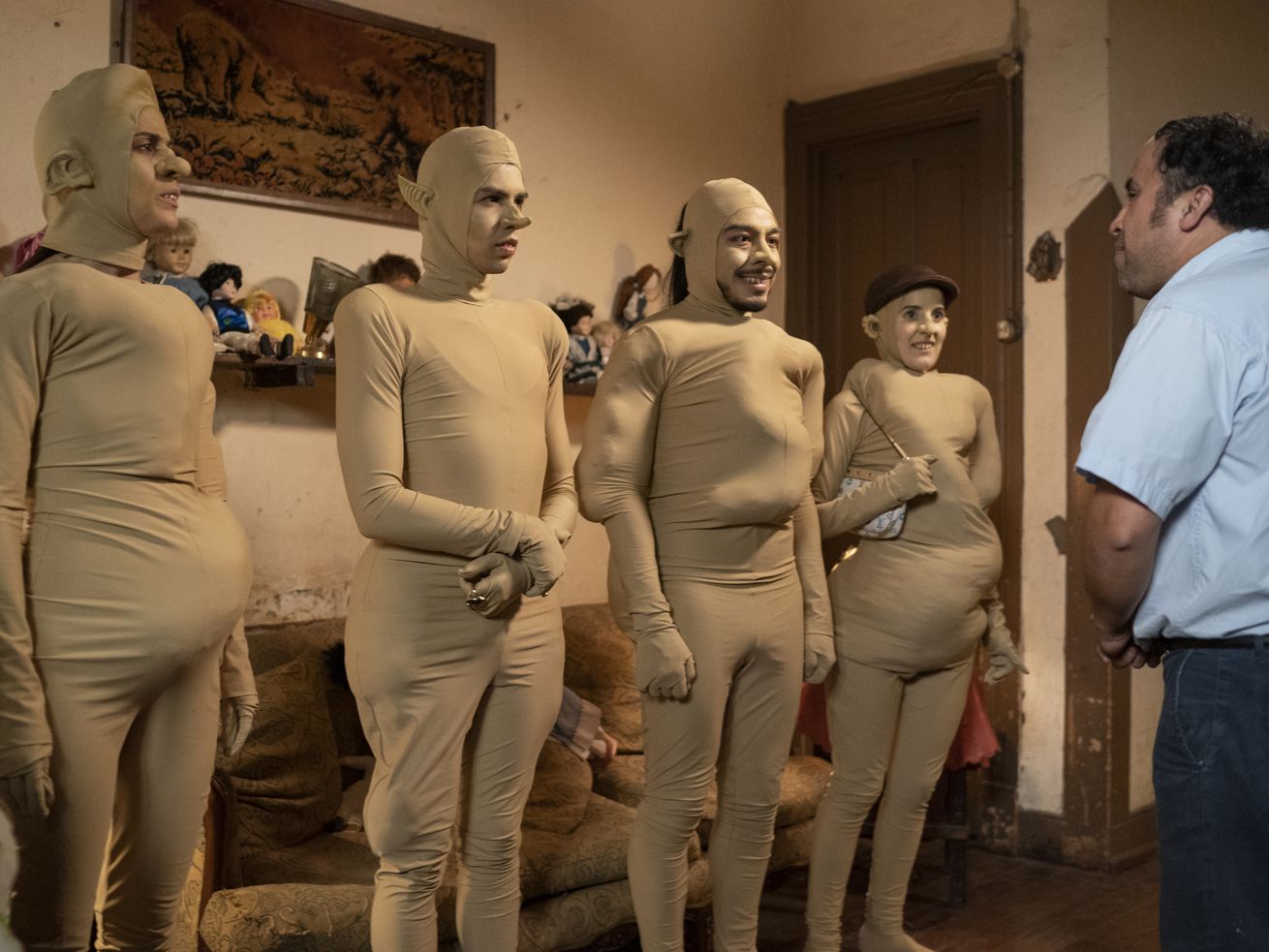 The bilingual comedy turns the world into a horror-themed diorama.

It feels reductive to call Los Espookys magical realism, both because it’s so much funnier than that term would normally imply, and because essentially every project that somehow involves Latin America gets dubbed “magical realism” at one point or another, whether the moniker fits or not.

But what’s so rewarding about this deeply weird little show — which HBO airs at 11 pm on Fridays, somehow the ideal timeslot for it — is how it all but forces you to pay closer attention to what could seem tossed-off or silly. You never know what might happen, a key tenet of magical realism.

It also feels like the show’s sneakily profound core is similar to the horrific ghouls and monsters cooked up by its central characters to inject a little horror into day-to-day life: It’s painstakingly handcrafted and assembled bit by bit until it adds up to something wonderful and, yes, magical.

American TV has been a little late to the boom in Latino populations in the US. In the 1990s and 2000s, this ever-growing audience was largely served by Spanish-language broadcasters like Univision and Telemundo, and onscreen representation of Latinos was usually limited to one-off characters on programs dominated by white characters (think Jimmy Smits on the final two seasons of The West Wing) or the occasional sitcom built around a Latino star (think The George Lopez Show).

In the 2010s, however, there’s been a slow move to acknowledge that there are a lot of Latinos living in the US and an even larger audience of Latinos and Spanish-speaking viewers worldwide. More and more programs — and often very good ones— are aimed at this audience. The category includes the warm and funny sitcom One Day at a Time (formerly of Netflix, soon of Pop) and Starz’s wonderful Vida. And now it includes Los Espookys.

Los Espookys takes place in an unspecified Latin American country, where everything feels just a little bit unsteady and unstable, and oddball occurrences feel almost commonplace. Renaldo (Bernardo Velasco), the lead member of “Los Espookys” (the homegrown horror business that gives the show its title), describes his attraction to low-budget, cheeseball horror by explaining to his fellow Espookys that he has always been missing the “Y” that should appear in his name. But eventually, he says, he came to realize that what he lacked was also what set him apart — just like the woman missing an eye in one of his favorite horror tales.

Mundane mysteries dominate the show. Series co-creator (and pilot co-writer) Fred Armisen plays a valet (that lives in the US) who can park two cars at once. A woman works as “a human Fitbit.” A news broadcaster can’t remember who she was before she was “discovered on the beach.”

The central idea of Los Espookys is that Renaldo and his friends band together to try to bring something electric to the world through horror. The episodes all center on some horror trope — episode three is about a little resort town that hopes to boost tourism by highlighting the presence of a local sea monster — which is brought into the world via the efforts of the Espookys. (In the case of episode three, the sea monster in question is a hand-crafted suit worn by one character, so she can pose on a rock while her coworkers play spooky sea monster noises on a cassette tape player.)

The result is a weird sense of a permeable world. You might lean against reality and tumble through it into some other place, where monsters really are real and where magic happens on the regular. The series is co-created by Armisen, Ana Fabrega, and Julio Torres (all of whom also star, with Fabrega and Torres receiving script credit on all six episodes), and it successfully captures the feeling of living in two spaces simultaneously that is often common to anyone juggling multiple selves within their identity — like immigrants, say, or artists.

And the idea of living in two worlds simultaneously is directly a part of the show’s text as well.

Los Espookys doesn’t take place in our reality. Or does it?

Los Espookys is set in both the unnamed Latin American country and the US, and features dialogue in both Spanish and English, each with subtitles. (When the action switches to the US and to English, the subtitles switch to Spanish, a touch I greatly enjoy.) So unless you’re fluent in both Spanish and English, you’re forced to draw a little nearer to the show, to pay attention rather than looking at your phone.

Of course, there are many people who are fluent in both Spanish and English, and maybe their experience of Los Espookys is looking up every so often from scrolling through Instagram to laugh at a particularly good joke or admire the creation of another painstakingly artisanal monster design. But for those of us who don’t speak both languages — or for those of us like your humble critic, who took a lot of Spanish in college and now sort of half remembers it — it sneakily captures that idea of existing in two worlds without beating you over the head with it.

This is to say that Los Espookys takes great pains to evoke a reality that is five degrees removed from our own, the better to keep viewers from wondering precisely which country it’s in, and the better to keep us hoping that maybe the monsters will eventually turn out to be real. But at the same time, it gets at a kind of metaphor for our reality that I don’t think I’ve ever seen deployed this well.

We live in an era of exploring our identities and the intersections of different parts of those identities — what does it mean that I’m a white, upper-class trans woman who goes to church and is from the Midwest? What does it mean if you’re completely different? Where do we overlap and veer apart?

These questions are useful! It’s helpful to talk about who we are, and to define our identities in a way that helps us describe ourselves to other people. But I’m not sure it’s the best way to explain our lives. Often, the best way to do that is through art. I don’t live a bilingual life, but Los Espookys effectively makes me do so, at least temporarily, and in the process, it helps me understand a little bit more of the experience of so many in its audience who do.

And at every level, Los Espookys is split between two worlds but supremely comfortable with that. To be pulled into just one world would be to leave the other behind, and there’s value in both of them. Besides, it’s not as if there’s a world where sea monsters are real, or where you might make a priest look good by performing an exorcism. A better world might remain stubbornly in the imagination — but who’s to say you can’t try to build it out of papier-mâché and construction paper? Who’s to say you can’t improve the world we know by making it a little spookier?