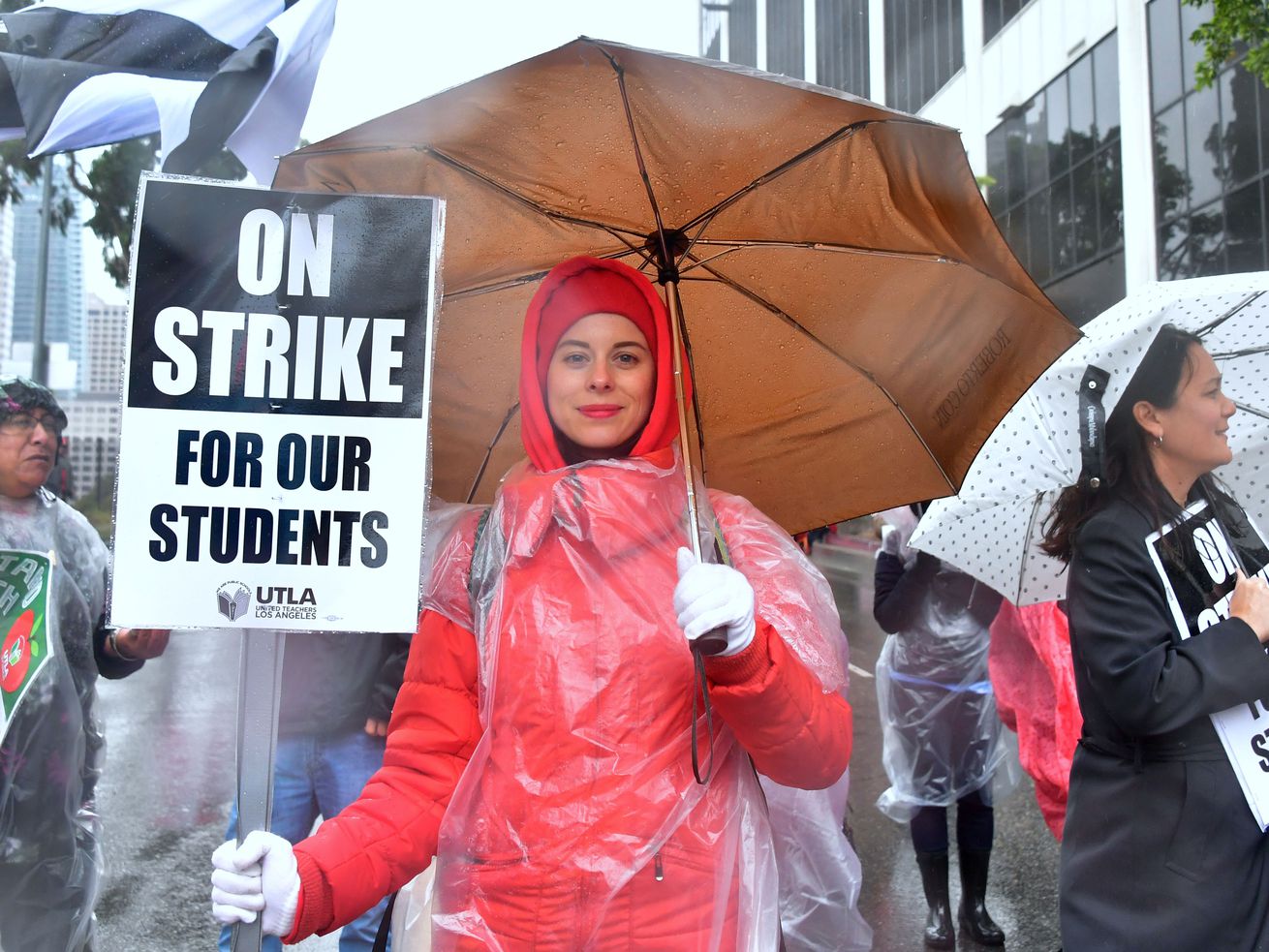 A new bill in Congress would represent a major shift in US labor laws.

Congressional Democrats want to give all government employees the right to unionize.

House and Senate Democrats plan to introduce a bill on Wednesday that would give public-sector employees collective bargaining rights for the first time under federal law, according to the American Federation of State, County, and Municipal Employees (AFSCME) union, which is pushing for the change. Sen. Mazie Hirono (D-HI) and Rep. Matt Cartwright (D-PA) will introduce the bill, called the Public Service Freedom to Negotiate Act.

Unlike employees who work for private businesses, the nation’s 21 million government employees have no collective bargaining rights under federal law. Millions live in states that do let them organize — and millions don’t. The new bill would require all states to let government employees organize and negotiate wages, hours, and working conditions.

If passed (a big if), the bill would represent a major shift in US labor laws, essentially making the right to organize a fundamental right for all US workers.

The bill is a direct response to last June’s US Supreme Court ruling in Janus v. AFSCME, which banned unions from collecting fees from teachers, firefighters, police, and other government employees they represent, unless those workers are card-carrying union members. That means workers who pay dues are unfairly subsidizing union benefits for their coworkers who choose to pay nothing, which strains a union’s finances.

It also comes at a time when Republican leaders, big businesses, and the courts have doubled down on their attempts to weaken the influence of labor unions and the workers they represent.

The difference between public- and private-sector unions, explained

A record number of workers went on strike last year out of frustration with stagnant wages and benefit cuts. That included grocery store clerks and hotel housekeepers, but it all started with government employees: public schoolteachers.

Teachers in West Virginia started a national movement when they launched a major strike last February. They were angry that they hadn’t received an across-the-board salary raise since 2014 and were among the lowest-paid teachers in the country. A total of 35,000 educators and school staff didn’t show up for nearly two weeks.

Since then, more than 450,000 workers in the US have gone on strike or stopped working because of labor disputes, the highest number since 1986. What made the teacher strikes most remarkable, other than their sheer size, was the fact that many work stoppages happened in states where government employees have no legal right to unionize or go on strike.

In West Virginia, for example, government employees have no collective bargaining rights or a right to strike, so teachers unions in the state act more like a professional association than anything else. But none of that stopped all public school teachers in West Virginia from going on strike, shutting down all 680 public schools in the state for nine days. The walkout ended in March after the governor and state leaders agreed to give teachers what they wanted: a 5 percent raise and a hold on increasing health insurance premiums.

Hundreds of thousands of teachers in Arizona, Oklahoma, California, Kentucky, and Colorado have since followed suit.

Aside from boosting teacher pay and education spending, the teachers strikes have highlighted the fact that government employees have fewer legal rights than most American workers.

When President Franklin D. Roosevelt gave workers the legal right to unionize back in 1935, he specifically left out government employees from the National Labor Relations Act. He argued that American capitalism made private-sector workers uniquely vulnerable to exploitation. Collective bargaining for government employees was unnecessary and too complex, he believed, so he left it up to states to decide.

But it didn’t take long for the public to realize that elected officials could exploit government employees too, slashing their pay and benefits in the name of balancing the budget.

In the 1950s, when public approval of labor unions was high, states began giving collective bargaining rights to government employees. The first US state to allow it was Wisconsin, in 1959. By the 1960s and 1970s, public-sector unions grew quickly to include teachers, firemen, police, and prison guards. In 1962, President John Kennedy issued Executive Order 10988, which allowed federal employees to bargain over pay and working conditions only.

Collective bargaining is now permitted in three-fourths of US states. That impact on individual workers is huge. For example, unionized state employees earn, on average, 17 percent more than their non-unionized peers, according the House Committee on Labor & Education.

Southern states have been the most resistant to grant employees bargaining rights. Three of them specifically ban all government employees from unionizing: North Carolina, South Carolina, and Virginia. In Texas and Georgia, only police and firefighters can negotiate contracts together.

Public employees in all these states would benefit the most from the Public Service Freedom to Negotiate Act, but the bill would also strengthen public-sector unions everywhere, potentially reversing decades of declining union membership and thwarting Republican efforts to weaken them.

Public-sector unions have grown quite powerful, despite all this

There are many reasons for this, as Vox’s Dylan Matthews points out:

This is the culmination of decades of decline in private sector unions in America, caused by a variety of factors including slower employment growth in unionized workplaces (compared to nonunion workplaces); anti-union legislation, particularly in the South and more recently the Midwest; the automation, offshoring, and general decline of union-heavy industries like textiles and auto manufacturing; and more sophisticated corporate anti-union drives.

That decline in private-sector unions is partly responsible for growing income inequality and stagnant wage growth in the US, research shows.

Before long, unions for teachers, sanitation workers, police officers, firefighters, prison guards, and more became standard in much of America. The union representing most state and local employees, the AFSCME — along with teachers unions like the National Education Association (NEA) and American Federation of Teachers (AFT) — became powerful political actors and, in some cases, the public image of labor unions.

That explains why the Supreme Court’s decision in Janus last year was considered devastating to the US labor movement.

Nearly a year ago to the day, the Supreme Court delivered a blow to government employees.

In the case Janus v. AFSCME, conservative lawyers challenged the practice of public sector unions charging “agency fees” to employees who decline to join the union but who still benefit from the deals it bargains. The fees are a bit lower than union dues.

In a 5-4 opinion written by Justice Samuel Alito and joined by the four other conservative justices, the Court ruled that requiring public employees to pay agency fees is unconstitutional under the First Amendment.

The logic is that unions are political actors, and by allowing unions to charge agency fees, state governments are basically forcing employees to financially support a political organization that they may not agree with. That, the plaintiffs claimed, is compelled speech and thus unconstitutional.

Twenty-eight conservative states already have “right to work” laws banning all unions from collecting agency fees. These laws create the so-called “free-rider” dilemma: people don’t have to join unions or pay agency fees to get the unions’ benefits, so the unions lose members and political influence.

The 22 states that don’t have right-to-work laws include heavily unionized ones like California, New York, Pennsylvania, Illinois, and Ohio; those five states alone account for nearly half of America’s total union members. That helps explain why the union movement views agency fees as necessary to their survival. Without the fees, labor activists feared that public-sector unions could shrivel and take the broader union movement with them.

In California and other states without right-to-work laws, the percentage of public employees represented by a union (including members and nonmembers) dropped 1.1 percentage points, to 52.8 percent in 2018, a slight drop from 53.9 percent a year earlier, according to data from the Bureau of Labor Statistics. By comparison, the 28 states that had already outlawed fair-share fees prior to Janus showed no change in the percentage of government employees represented by a union. Public sector unions in those states even saw a tiny bump in membership rates.

While Janus has hardly decimated unions for government employees, labor organizers are now pushing for policies that will move the labor movement toward greater progress.

The Public Service Freedom to Negotiate Act would recognize a fundamental right for government workers to unionize. States would have to guarantee them the following: the right to collectively bargain over wages, hours, and terms and conditions of employment; the right to strike (with few exceptions); access to dispute resolution forums, such as mediation or arbitration; voluntary payroll deduction for union dues and the right to sue in court to enforce these rules.

The bill would essentially cancel the Janus ruling by outlawing the free-rider option, while expanding union rights to government workers in all states.

The bill is similar to one that House Democrats introduced last month for private-sector workers. The Protecting the Right to Organize Act (PRO Act) pushes back against Republican-backed right-to-work laws that have cropped up in more than two dozen states in the past decade.

Still, it’s highly unlikely that any Republicans in the GOP-controlled Senate would ever touch these new labor reform bills. In fact, they’re moving in the other direction, trying to pass a separate bill in the Senate that implements right-to-work laws in every state. And anti-union groups have already started bashing the Democrats’ labor reform bill, calling it “anti-worker” and “anti-freedom.”

Even with such slim prospects, House Democrats are introducing these reforms at a crucial moment in the US labor movement. Despite declining union membership, more and more Americans these days support the idea of unionizing. In fact, there’s been a sharp increase in public support for labor unions in the past 15 years, according to Gallup.

On top of that, a record number of workers across the country have been going on strike in the past year, demanding higher wages and better benefits as the economy expands. Democrats have sensed this shift in favor of unions, and their new bills would give workers even more momentum.