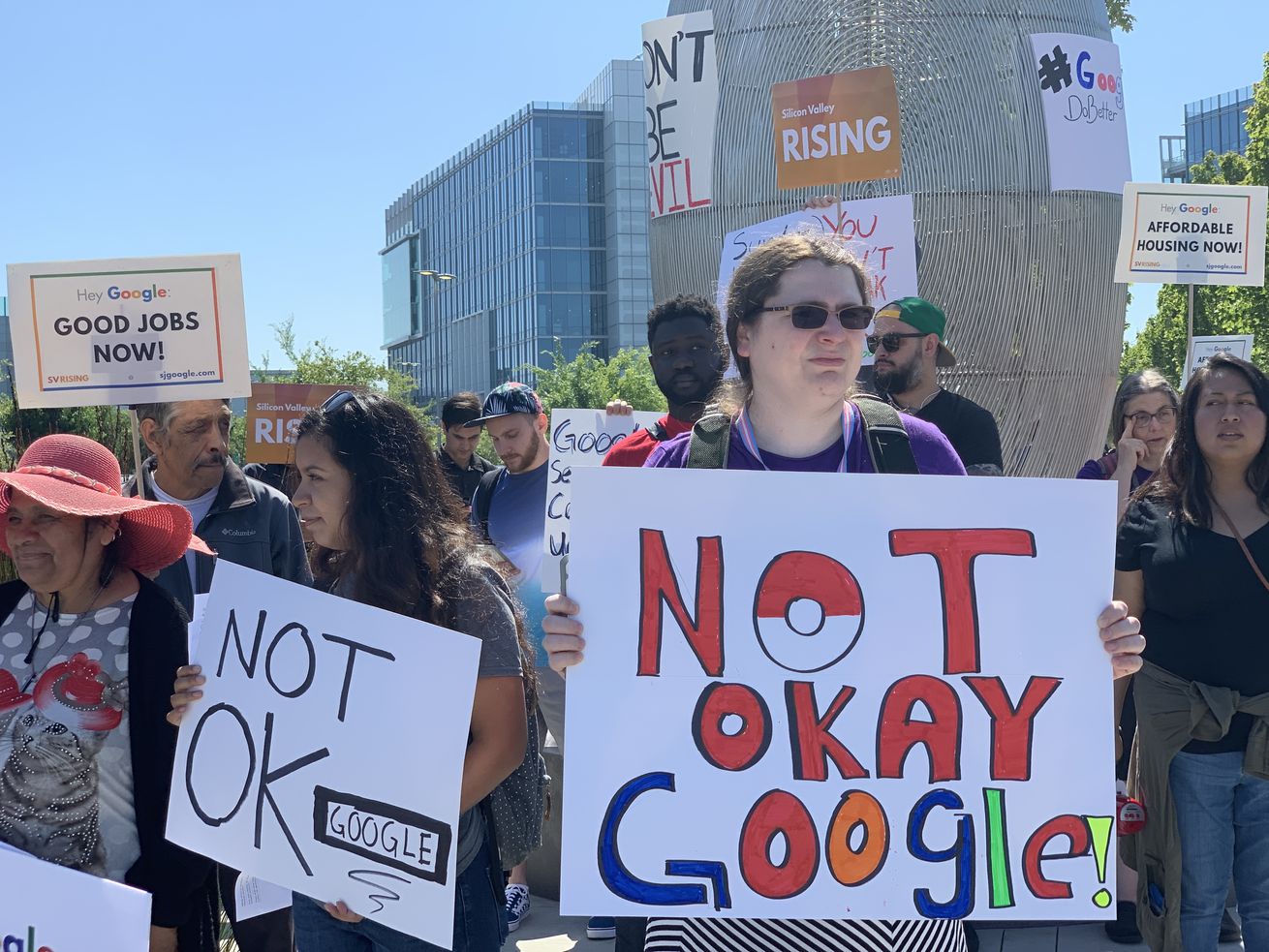 Workers joined community activists in demanding change from Google on how it handles sexual harassment in the workplace and its plans to build a censored search engine for China.

For the first time, Google employees coordinated with multiple activists and investors to create several proposals that they presented at a company shareholder meeting on Wednesday. Around 100 Google employees and community activists also protested as a united group outside Alphabet headquarters during the meeting.

It was an escalation of an employee organizing movement within Google to demand more transparency from company leadership and to draw attention to complaints over issues such as the company’s sexual harassment policy and its efforts to build a censored search engine in China.

In the past, shareholders have submitted independent proposals and workers have tried to halt controversial company policies. But Wednesday’s efforts are the first time the company’s employees formed a broad coalition with several activist groups and investors to pressure Google, according to organizers from Coworker.org, who helped connect employees with investors to collaborate on five shareholder proposals.

“We’re here as members of the Google community saying that we have to do better,” said Wyatt Ratliff, a Google employee. “A lot of my coworkers are reporting sexual harassment to HR and HR is working to defend the company and the accusers.”

One of several shareholder proposals presented on Wednesday called for management to review whether the company should adopt and implement additional policies on sexual harassment, and to report its findings. Like the other 12 proposals that were up for vote Wednesday, it did not pass. A Google communications executive outside the meeting declined to comment on the protest or shareholder proposals.

Ratliff said that Google has “made some right steps in the right direction” since the historic employee-led walkout last May, when 20,000 Google workers left work to protest the company’s handling of sexual harassment claims, but said “it’s still not enough.”

Other Google employees spoke about their concerns over working conditions for temporary, vendor, and contract employees (TVCs) — who make up over half of the company’s workforce. One TVC at the protest, who preferred to remain unnamed, said many of his peers are upset with low pay and other workplace issues, but are fearful of management retaliating if they speak out. Two of the employee organizers of the Google walkout have recently accused Google of retaliating against them because of their role in protests. Alphabet has maintained that it prohibits any retaliation in its workplace.

Ultimately, it didn’t come as a surprise that none of the proposals passed — seeing as the company advised against all the proposals, and Google co-founders Larry Page and Sergey Brin hold 51 percent of the voting power of Alphabet.

Still, organizers said that despite Alphabet’s concentrated corporate power, actions like theirs help put pressure on the company to take action on social issues.

One sign from the protest, listing the first names of the members of Alphabet’s board, read, “Sundar, Larry, Sergey, Ruth, Kent — You don’t speak for us!”

One Google employee speaking at the protest asked the crowd if they thought it was a “coincidence” that Google recently announced it would invest $1 billion toward affordable housing after years of community and employee activism on the issue. An employee at the demonstration told Recode that Wednesday’s protest was an attempt to pressure the company to make more changes. “Alphabet is a big place, it’s not just made up of a board of directors,” said the employee.