GERMANY has no chance of avoiding a feared second wave of coronavirus and a draconian lockdown, a leading virologist has warned.

Fears of a second wave are growing in Germany after 4,127 new cases were recorded last week, up from 2,385 two weeks ago.

Today alone there were 684 new cases today, meaning that cases have risen by 600 or more for four of the last six days, which it has not down not done since June.

Experts are concerned Covid-19 is spreading across the country, rather than being confined to localised clusters, with the R rate now regularly above 1.0.

Dr Schmidt-Chanasit, a virologist at the University of Hamburg, told ARD  the situation could “very quickly get out of control”.

He said: “Now travellers are being added to the mix as well — there are many clusters which politicians but also scientists will have to to react to.”

Asked about a possible second lockdown, he said: “If we really get a second wave — I define that as our health system being overwhelmed — then we won’t be able to get around very dramatic, very drastic measures.”

Six new deaths today brought the total to 9,128, although this remains much lower than in Britain, Spain, Italy or France.

If we really get a second wave… then we won’t be able to get around very dramatic, very drastic measures

Robert Koch Institute president Lothar Wieler said: “We have to realise that we have an increasing number of cases in Germany.

“I am very concerned about the latest developments in case numbers in Germany.”

Until recently the number of deaths across the country had been dropping, he pointed out.

But one expert said that it is “too early” to say whether some European countries were experiencing a second wave.

Dr Michael Head, senior research fellow in global health at the University of Southampton, said: “It is a little early to say definitively whether some European countries, such as Spain or Germany, are experiencing the start of a second wave, or simply seeing spikes in their caseloads.

A couple stands with a placard in Cologne, GErmany as brothel workers protest against the lockdown of their business [/caption]

Most read in News


Big coronavirus outbreak at pub where ‘200 people crammed like sardines’

Meanwhile in the UK, health leaders have “very high” levels of concern about the possibility of a second spike in coronavirus cases.

Niall Dickson, chief executive of the NHS Confederation, said that the combination of a spike of cases with “exhausted staff” while the NHS tries to rebuild services could prove “challenging”.

Yesterday Boris Johnson indicated that quarantine restrictions, which have been imposed on Spain, could be done on further European countries if a “second wave” of coronavirus hits the continent.

Passengers wait for their check-in at the airport in Duesseldorf, western Germany, as health bosses say holidaying Germans are partly behind the spike[/caption] 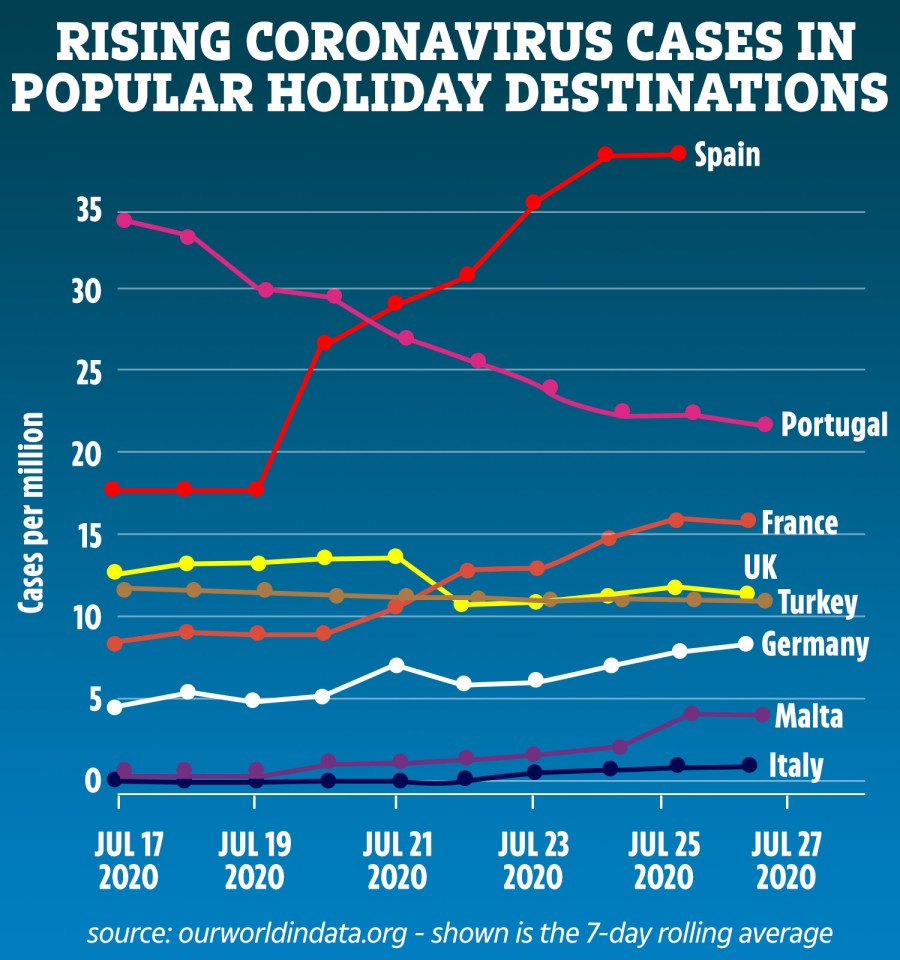