HUGE fires have been broken out around Minneapolis as rioting continues after protests over the death of George Floyd turned to violence.

Demonstrations started out peacefully before descending into chaos as cops used rubber bullets, tear gas and pepper spray to try and control the chaos.

Fury is mounting over the death of Floyd, who died after police officer Derek Chauvin knelt on his neck.

Huge fires have been reported – with unverified footage being circulated online showing a number of large buildings totally engulfed in flames.

There are various conflicting reports as to what is on fire – with some reporting a Target store, and others saying an under construction apartment block.

Minneapolis city authorities have requested assistance from the National Guard as the chaos continues to spread, reports KSTP.

Senator Tina Smith said: “I’m praying for peace and healing tonight in Minneapolis, as I hear sirens and explosions across our green city.”

Governor Tim Walz said: “The situation near Lake Street and Hiawatha in Minneapolis has evolved into an extremely dangerous situation.

“For everyone’s safety, please leave the area and allow firefighters and paramedics to get to the scene.”

Police spray protesters with pepper spray during a demonstration[/caption]

Minneapolis police chief John Elder also confirmed at a press conference the rioting had turned deadly as a man was killed.
He confirmed the person had been shot and another man was being held in custody after a body was was found lying on the sidewalk outside the Cadillac Pawn & Jewelry.

Police officers attempted CPR on him but it was too late as Mr Elder said “everything was done that we could do to try to preserve this man’s life”.

The top cop refused to confirm reports the shooter was the owner of the pawn shop and if the man was attempting to loot the store.

He confirmed this was “one theory” but detectives are probing “a couple of different scenarios”.

Video being circulated online shows a group of officers surrounding a man lying sprawled on the floor.

Voices from a gathered crowd can be heard shouting “f*** y’all” as one cop appears to be giving the man CPR.

Cops then disperse the onlookers, shouting “there is someone in there with a rifle” as two officers run towards a building appearing to have their weapons drawn.

Other videos being widely shared online appear to show a woman in a wheelchair being punched by looters – but some have claimed she had a knife.

Meanwhile, video from LA shows a cop car being set upon by a group of rioters – who smash its back window.

It then speeds off, with one man who attempted to climb on the hood being thrown off and left injured.

Pictures appear to show a man being treated by other protesters on Highway 101 after suffering a head wound.

Mr Elder took aim at looters who he branded “disrespectful” to Mr Floyd’s family and the peaceful protesters demanding justice.

He said: “If people are there to truly honor the man and his family this isn’t how you do it and it’s so disrespectful and it’s heartbreaking.

“People are utilizing this as a purpose just to make bad decisions.”

Protesters react to police during a demonstration in LA[/caption]

Police aim at protesters from a rooftop[/caption]

Flash bangs explode near protesters amid the chaos[/caption]

Protesters had initially gathered at the intersection where Floyd died and at the Minneapolis Police Department’s 3rd Precinct, where Chauvin is believed to have worked, during a second day of demonstrations.

Rallies are calling for Chauvin and the three other officers reported to be involved – Thomas Lane, Tou Thao and J. Alexander Kueng – to be charged with murder.

Video has been viewed millions of times of Mr Floyd, shirtless and unarmed, being pinned to the ground as he repeatedly said “I can’t breathe”.

Peaceful protested were marred as rioting and looting flared up amid the tensions – with pictures showing stores being raided, fires being set and windows smashed with rocks.

Looters loaded up home goods such rugs and coffee machines into shopping carts while others watched the free-for-all through broken windows at a nearby Target.

The heated demonstrations in Minnesota came as:

As the demonstrations stretched into the night, footage captured at the scene showed protesters hurling fireworks at police officers.

Looters descended on stores amid the chaos[/caption]

Protests gather around the police station[/caption]

Despite pockets of intense chaos, the protests were largely peaceful[/caption]

At around 6pm, police began firing tear gas and rubber bullets as protesters unleashed their frustrations on the precinct, WCCO reported.

Demonstrators were seen dousing their faces with milk and water after encountering chemical irritants launched by cops.

Bottles and rocks were thrown at the building as people shattered windows and hurled metal barricades into the brick structure.

A group also gathered outside of what they believed is the home of fired officer Chavin in Oakdale, according to the news station.

As tensions between cops and civilians hit a fever pitch for the second day in Minneapolis, violence also erupted in Los Angeles during a Black Lives Matter protest.

Demonstrators hurled barricades at the precinct building and broke windows[/caption] 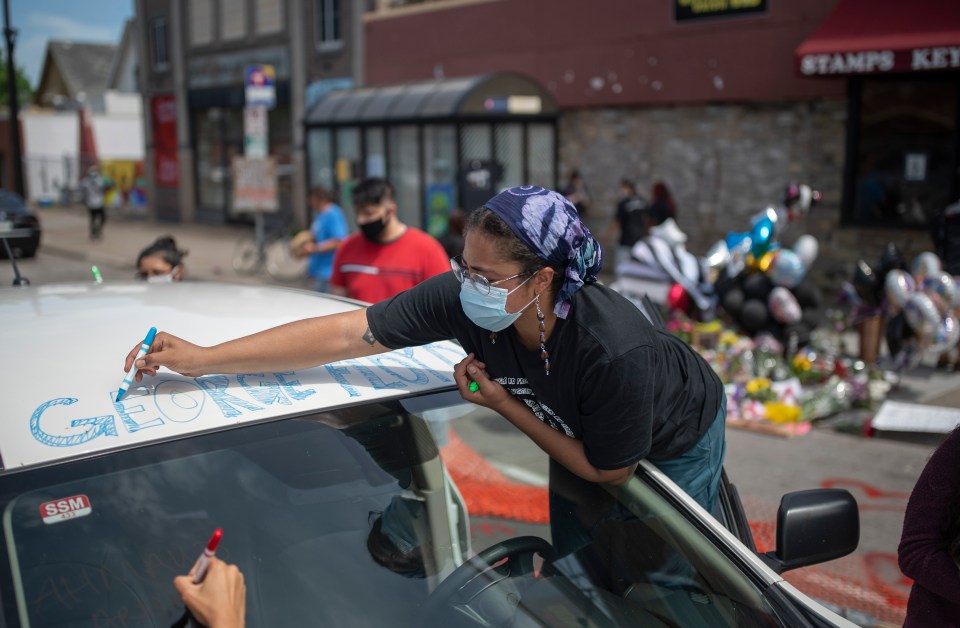 Some were seen vandalizing police vehicles in Minneapolis[/caption]

Around 1,000 protesters marched through downtown Los Angeles on Wednesday night, a scene similar to the city’s 1992 riots over the beating of Rodney King.

Angelenos were seen attacking a police car, bashing in windows with skateboards and even kicking in the car’s windshield.

As the officer frantically tried to escape the chaos, a man rode on the hood of a cop car for a few moments before he tumbled off and appeared to hit his head, according to KABC.

He remained motionless as a crowd gathered around him and emergency services rushed to his aid.

Moments later, the group surrounded a second police vehicle that tried to assist and smashed its windows before the car sped off.

Around 1,000 demonstrators reportedly blocked a highway in downtown LA, forcing its shutdown[/caption]

Trump revealed on Wednesday that the probe came at his request as he offered condolences to Mr Floyd’s family and friends.

“At my request, the FBI and the Department of Justice are already well into an investigation as to the very sad and tragic death in Minnesota of George Floyd,” said Trump.

“My heart goes out to George’s family and friends. Justice will be served!”

Mr Floyd’s family have led calls for the cops involved in his death to be charged with murder following the emergence of the shocking video.


Grieving dad reveals son, 12, took his own life after struggling with lockdown

‘JUSTICE WILL BE SERVED’

Ms Brown and Mr Floyd’s brothers held up his picture and described him as a “gentle giant”.

Philonise said: “They could have tased him; they could have maced him. Instead, they put their knee in his neck and just sat on him and then carried on.

“They treated him worse than they treat animals.”