CROWDS in Berlin have clashed with riot cops during demonstrations to oppose measures intended to stop the spread of coronavirus.

Police were forced to detain a number of people after large groups, which are currently prohibited, gathered in the city’s central Alexanderplatz square.

Police were forced to detain a number of people[/caption]

Protesters say that bans on protests breach their constitutional rights[/caption] 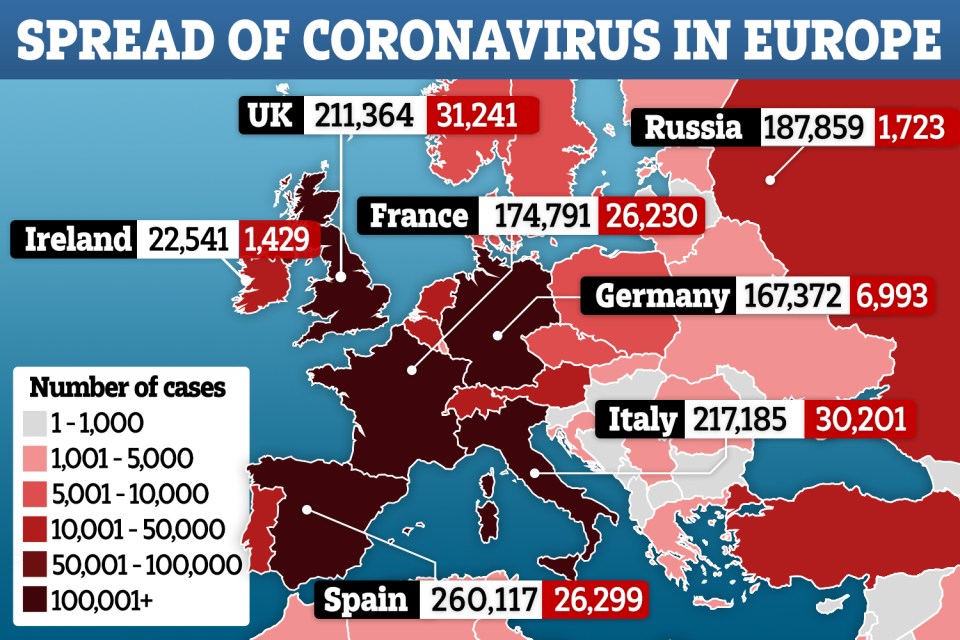 Germany has been relatively successful in containing the virus, with only 7,525 deaths so far, and is now in the process of easing its lockdown.

All shops have been allowed to reopen, certain students are returning to school, and the Bundesliga, the top tier of German football, is set to resume.

But there has been opposition to the measures that remain in place, which include social distancing requirements and a ban on gatherings of more than 50 people.

Today saw a demonstration involving hundreds of people, and chants of “Wir sind das Volk!” [“We are the people!”] and “Freiheit!” [“Freedom!”] could be heard.

Law enforcement attended the scene to disband crowds, with officers reportedly having to detain people and deploy pepper spray.

Pictures showed lines of police with riot shields clashing with angry-looking protesters as well as people being dragged away in handcuffs.

Berlin has seen numerous demonstrations against the measures in recent weeks.

On April 25, when tighter lockdowns remained in place, around 200 people gathered in Berlin to oppose it, claiming that the measures violated their constitutional rights.

Last week saw activists stage a socially-distanced protest in place of the marches that usually take place on May 1 for International Workers’ Day.

Last month, Germany’s Constitutional Court ruled that citizens have a right to protest even during a pandemic so long as social distancing is practised.

Speaking to Sun Online, Berliner and sustainability expert Sarah Eager said the protests were “unnecessary” and that the city already enjoys various freedoms which other European capitals currently do not.

Similar protests have also taken place in countries around the world.

MOST READ IN WORLD NEWS


Ibiza deserted by coronavirus as before & after pics show haunting transformation

In the US, many towns and cities have seen large public gatherings of residents, many of them armed, claiming that the lockdown is incompatible with the constitution.

In Poland, there have been protests against the closure of the country’s border because many residents move across the border into neighbouring Germany as part of their commute to work.

An angry crowds faces a line of police[/caption]

A man in a balaclava being detained[/caption]