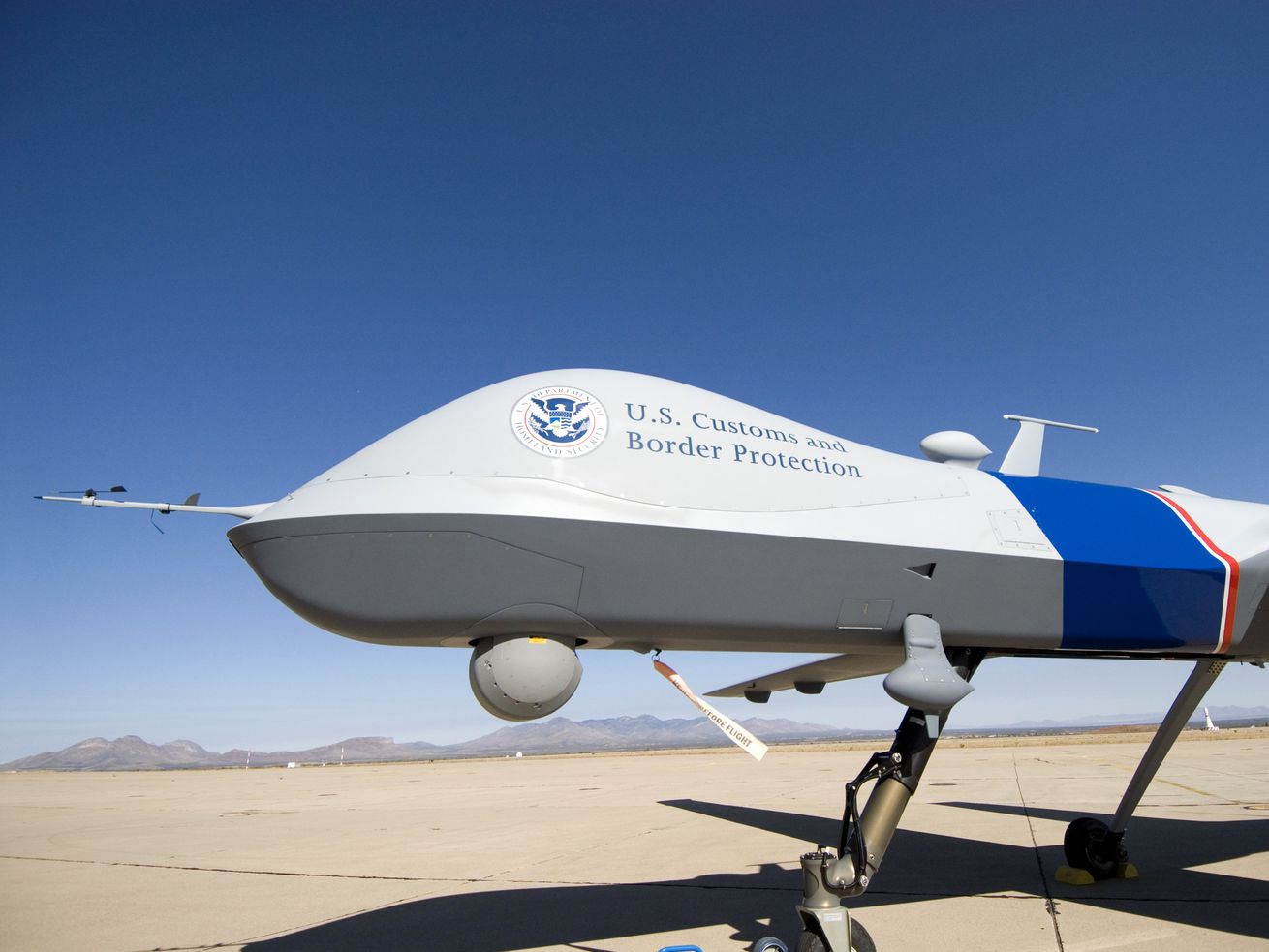 Customs and Border Protection regularly uses Predator surveillance drones to surveil the border, but on Friday, one took a detour. | Gary Williams/Getty Images

The US has a long history of surveilling protesters, but the technology used to do so has grown more powerful.

On Friday, a Predator surveillance drone operated by United States Customs and Border Patrol (CBP) diverted from its normal route along the Canadian border in order to circle the skies over Minneapolis. Hours earlier, a third night of protests had escalated as thousands demonstrated following the death of George Floyd, a black man who died after a police officer held his knee to Floyd’s neck for several minutes. (The officer has since been fired and charged with third-degree murder.) And while federal authorities say the unarmed drone was there “to provide situational awareness,” the presence of a military-grade aircraft watching protesters in Minnesota added to an already anxious day in America.

A couple of hours before reports about the Predator drone over Minneapolis, President Trump tweeted, “When the looting starts, the shooting starts.” Though his use of this charged phrase with racist origins suggests a threat against the protesters, Trump later tried to walk back his statement, and it seems unlikely that his rhetoric had anything to do with the drone flight. Still, to know that a drone was circling the protesters as the president was making these charged remarks is unsettling. According to CBP, however, the Predator drone that flew over Minneapolis was there to help the police.

“Earlier today a US Customs and Border Protection, Air and Marine Operations unmanned aircraft system was preparing to provide live video to aid in situational awareness at the request of our federal law enforcement partners in Minneapolis,” a spokesperson for CBP told Recode in an email. “The unmanned aircraft system provides live video feed to ground law enforcement, giving them situational awareness, maximizing public safety, while minimizing the threat to personnel and assets.”

The spokesperson said that “arriving in Minneapolis airspace, the requesting agency determined that the aircraft was no longer needed for operational awareness and departed back to Grand Forks.” The CPB spokesperson also added that the agency “routinely conducts operations with other federal, state, and local law enforcement entities to assist law enforcement and humanitarian relief efforts.” The specific law enforcement agency that requested the drone was not named.

Here’s what else we know about the flight. The drone CPB 104, which is an unarmed version of a Predator drone, departed from Grand Forks, North Dakota, around 9 am CT, according to data collected from the flight-tracking tool ADS-B Exchange. Flying at around 20,000 feet, it made a loose hexagon-shaped route around Minneapolis and then began to fly away from the city. The drone flight might have gone unnoticed if it hadn’t been spotted by Jason Paladino, an investigative reporter with the Project on Government Oversight, who shared the news in a tweet. Motherboard followed up with a fuller report.

“No government agency should be facilitating the over-policing of the Black community, period. And CBP has no role in what’s happening in Minneapolis at all,” said Neema Singh Guliani, senior legislative counsel at the American Civil Liberties Union, in a statement. “This rogue agency’s use of military technology to surveil protesters inside US borders is deeply disturbing, especially given CBP’s lack of clear and strong policies to protect privacy and constitutional rights.”

As Guliani suggests, the drone’s deployment is part of a larger trend in which government agencies, including police, are using increasingly powerful surveillance tools for monitoring activists. The use of the military-grade drone technology also raises concerns about the federal government deploying sophisticated drone technology typically only used in war zones and along the border — an already highly alarming practice — to conduct surveillance operations inside the US.

“This is what happens when leaders sign blank check after blank check to militarize police, CBP, etc while letting violence go unchecked,” tweeted Rep. Alexandria Ocasio-Cortez in response to news of the drone flight. “We need answers. And we need to defund.”

Surveillance tech deployed at the border is coming into the US

The technology used to monitor the US border has become increasingly high tech, and members of both parties have become interested in the idea of a “smart wall” along the border. While Donald Trump has called for a physical border wall, officials have come to look at, and sometimes use, all sorts of technology, including Lidar, artificial intelligence-powered cameras, facial recognition, and cellphone data monitoring to regulate people near or crossing the border.

Human rights advocates and civil liberties advocates have strongly opposed the use of such technologies, pointing out that they can exacerbate racial inequities and privacy violations.

But drones have been used at the border for more than a decade. As Recode’s Shirin Ghaffary reported, CBP has been using Predator B aircraft at the border since 2006. The CBP 104 drone has been in use since October of that year, according to a March 2007 report from Government Technology magazine that described how the new unmanned aerial system had been used to find people suspected of crossing the US border without authorization.

Meanwhile, CBP documents from 2012 identify the CBP 104 as a Predator drone equipped with radar and satellite communication links, not to mention radio communications with law enforcement. As the Washington Post reported in 2014, flight logs show how CBP has historically allowed its drones to be used by other federal agencies, such as the Coast Guard and the Drug Enforcement Administration.

In response to Recode’s request for comment, the CBP spokesperson also said that its air and marine operations aircraft is used throughout the country, not just at the border, and that it regularly works with federal, state, and local law enforcement. The spokesperson claimed that the drone has been used in humanitarian relief efforts as well as to help agencies like FEMA.

The US has a long history of surveilling protesters

The fact that the government uses a range of technology to surveil protesters, including black activists, is by no means new. Martin Luther King and Malcolm X were both surveilled by the Federal Bureau of Investigation (FBI). But the technology that police departments and federal authorities now have access to is much more powerful than what was around in the 1960s. Some of these tools, like Predator drones, would not be out of place on foreign espionage missions, and now they’re increasingly deployed to monitor activists and protesters inside US borders.

Examples from recent years are especially alarming. Following the 2014 protests in Ferguson, Missouri, the Department of Homeland Security kept tabs on the Black Lives Matter movement through organizers’ social media accounts, according to an Intercept investigation. Just a year later, the American Civil Liberties Union released a report detailing how companies, including Facebook and Twitter, provided social media data for a surveillance product that was marketed to law enforcement agencies as a way to track activists and protesters. The New York Police Department, specifically, has deployed a variety of tools over the years to surveil activists, including those involved in the Black Lives Matter Movement and Occupy Wall Street.

Aerial surveillance is also not a new tactic being used by cops, either. During the 2015 Baltimore protests following the death of Freddie Gray, the FBI used a spy plane to record the protests as well as smaller gatherings, according to the ACLU. Since then, the Baltimore police have fought — and won — the ability to regularly use surveillance planes that are armed with cameras, despite the objections of activists and civil liberties advocates.

The Minneapolis Police Department is not different in its affinity toward surveillance technology. BuzzFeed reviewed the many types of surveillance the department likely has at its disposal. They include Clearview AI’s facial recognition software, automatic license plate readers, audio-based gunshot detection tools, and other data aggregation tools.

Still, as Friday’s Predator drone flight suggests, it can be incredibly difficult to understand just how much technology law enforcement actually has access to at any point in time. Many of these tools are often hidden from public view, leading journalists and advocates to turn to require public records requests and lawsuits to learn more about how they’re used.

While CBP says the drone has been directed away from Minneapolis, it is possible to track where the drone is now; its flight path is documented on this website. As of early Friday evening, the drone appeared to still be in flight, traveling a hexagon-shaped route close to the Canadian border.