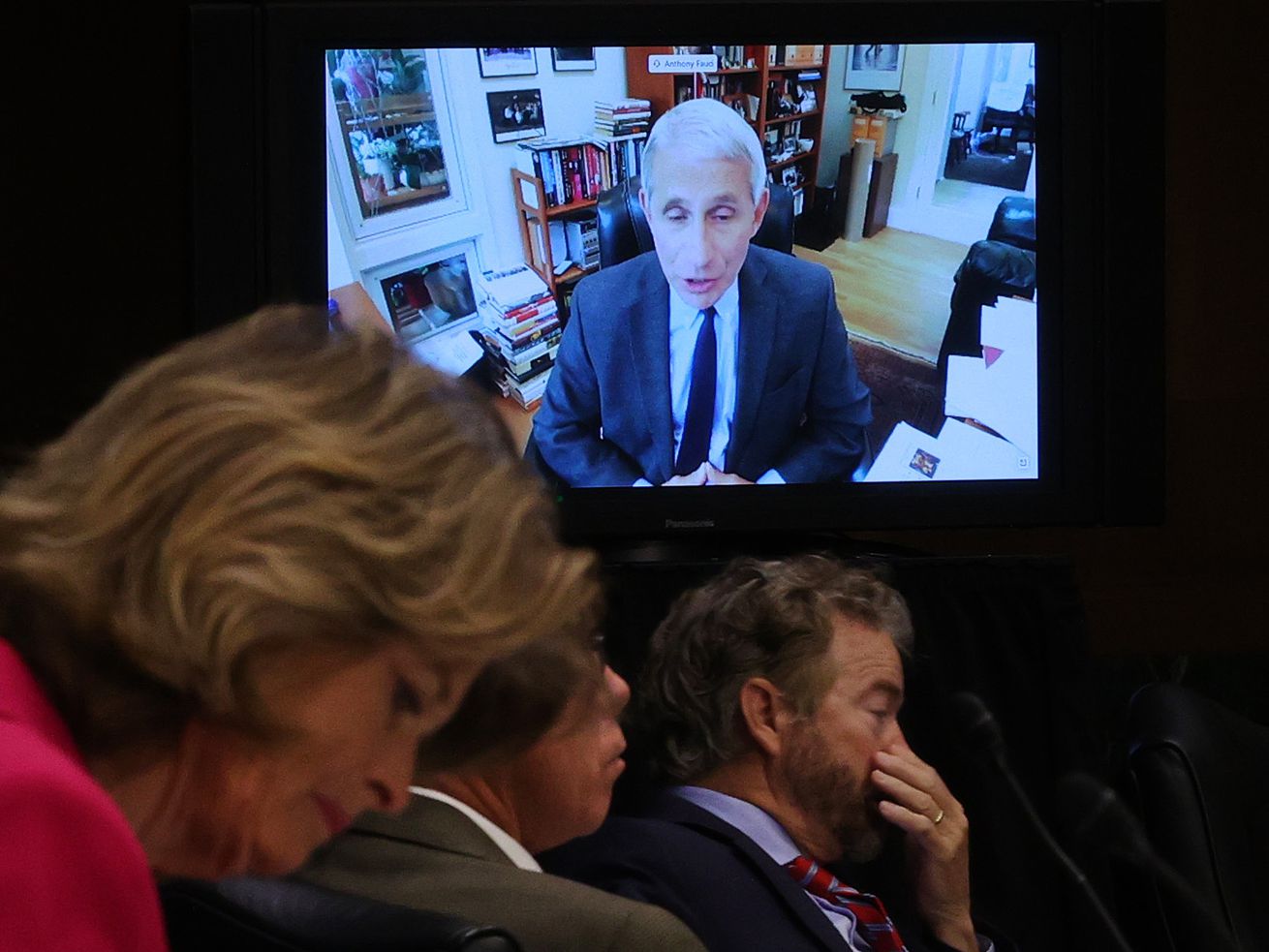 Fauci didn’t even say Trump’s name. He didn’t have to.

Dr. Anthony Fauci was careful not to directly rebuke President Donald Trump during Tuesday’s Senate hearing on the coronavirus pandemic. Even so, the totality of his testimony undermined talking points Trump has used to downplay the pandemic while pushing for the premature opening of businesses and schools.

Fauci — who as director of National Institute of Allergy and Infectious Diseases is the government’s top infectious disease expert — made clear that he thinks states should pump the breaks on reopening until the number of new cases per day starts going down. And with one notable exception, senators — even the Republican ones — seemed appreciative of his input.

The tone for the hearing was set immediately, when Sen. Lamar Alexander (R-TN) — chair of the Health, Education, Labor and Pensions Committee — kicked things off by talking about people going “back to school and back to work,” even though he’s currently self-quarantining in Tennessee after one of his staffers tested positive for Covid-19. Fauci didn’t waste any time pouring cold water on a question Alexander asked about the possibility of universities reopening in the fall.

“The idea of having treatments available or a vaccine to facilitate the re-entry of students into the fall term would be something that would be a bit of a bridge too far,” he said.

Trump, for instance, has repeatedly insisted that the coronavirus “is going to disappear,” including as recently as last week. But in response to a question from Sanders, Fauci made clear that is not going to happen.

“When you talk about ‘will this virus just disappear’ — and I’ve said publicly many times, that is just not gonna happen because it’s such a highly transmissible virus,” he said. “And even if we get better control over several months, it is likely that there will be virus somewhere on this planet that will eventually get back to us.”

Fauci with a subtle rebuke of Trump: “When you talk about ‘will this virus just disappear’ — and I’ve said publicly many times, that is just not gonna happen because it’s such a highly transmissible virus.” pic.twitter.com/af6xgx2dpb

Fauci also agreed with a question Sanders asked him about whether he concurs with experts who have concluded the US coronavirus death toll, which has reached more than 80,000, represents an undercount — comments undercutting arguments Trump and his advisers have reportedly embraced in private about official death numbers being inflated.

“Most of us feel that the number of deaths are likely higher than that number, because given the situation particularly in New York City when they were really strapped with a very serious challenge to their health care system, that there may have been people who died at home who did have Covid who were not counting as Covid, because they never really got to the hospital,” Fauci said.

Sanders asks Fauci if coronavirus deaths are being undercounted. Fauci says “most of us feel the numbers of deaths are likely higher” than the official numbers. pic.twitter.com/dxyQj7C914

When Trump hasn’t been engaged in wishful thinking or denialism, he’s tried to shift blame for America’s coronavirus woes, going as far as to absurdly attack former President Barack Obama for not developing tests for a virus that didn’t even exist at the time he was president.

During Tuesday’s hearing, Sen. Mitt Romney (R-UT) asked Fauci if Obama did anything that “made the likelihood of creating a vaccine less likely.” Fauci quickly dismissed the question — and, by implication, Trump’s talking point.

ROMNEY: The president said the other day that Obama is responsible for our lack of a vaccine. Are Obama or Trump responsible?

FAUCI: “No, senator, not at all.” pic.twitter.com/pvqwwaj17F

As Trump prematurely declares victory over the coronavirus and focuses on getting the economy up and running in time to salvage his flagging reelection hopes, Fauci made clear that if states reopen schools and businesses without first meeting the White House coronavirus task force’s criteria for doing so — and so far none of them have — there will be deadly consequences.

“If some areas — city, states, or what have you — jump over those various checkpoints and prematurely open up without having the capability of being able to respond effectively and efficiently, my concern is that we will start to see the spikes that might turn into outbreaks,” he said.

A tale of two Republicans

One state that is currently experiencing a coronavirus outbreak is Kentucky. But that didn’t deter Sen. Rand Paul (R-KY) from using his questioning time to push back on Fauci and downplay the coronavirus in Trumpian fashion.

Paul began by discussing what he described as the “silver linings” of coronavirus outbreaks at meatpacking plants — namely, his unproven belief that people who get Covid-19 gain immunity and therefore can go back to work. He then pivoted into making a case that more rural states like his haven’t been hit as hard by the coronavirus as some may think.

“In rural states we never really reached any sort of pandemic levels in Kentucky and other states,” Paul said, adding, “really, outside of New England, we’ve had a relatively benign course for this virus nationwide.”

Rand Paul: “In rural states we never really reached any sort of pandemic levels in Kentucky and other states … outside of New England, we’ve had a relatively benign course for this virus nationwide.” (More than 81,000 Americans are dead.) pic.twitter.com/tQSZvU6gfx

In response, Fauci pointed out that “I have never made myself out to be the end-all and only voice in this. I’m a scientist, a physician, and a public health official.” He warned that Paul’s push to reopen schools at a time when doctors are struggling to understand the link between Covid-19 and a potentially deadly syndrome developed by kids who have contracted it could be ill-advised.

“We don’t know everything about this virus, and we really ought to be very careful, particularly when it comes to children,” Fauci said.

Dr. Anthony Fauci: “I have never made myself out to be the end all and only voice in this. I’m a scientist, a physician and a public health official.” pic.twitter.com/Nqlg3zOqn3

Romney not only devoted his questioning time to pushing back on the president’s conspiracy theories, he also rebuked administration officials for misleading the American public about the status of coronavirus testing in the US.

Addressing Dr. Brett Giroir, assistant secretary of health and human services, Romney said: “I understand that politicians are going to frame data in a way that’s most positive politically. Of course they don’t expect that from admirals. But yesterday you celebrated that we had done more tests and more tests per capita even than South Korea. But you ignored the fact that they accomplished theirs at the beginning of the outbreak, while we treaded water during February and March.”

“As a result, by March 6, the US had completed just 2,000 tests, whereas South Korea had conducted more than 140,000 tests,” Romney continued. “So, partially as a result of that, they have 256 deaths and we have almost 80,000 deaths. I find our test record to be nothing to celebrate.”

Romney rebukes HHS official Giroir for comparing the US testing record favorably with South Korea : “Politicians are going to frame data in a way that’s most positive politically. Of course they don’t expect that from admirals … I find our testing record nothing to celebrate.” pic.twitter.com/afUBHieThH

Many senators let Fauci do the talking for them. Sen. Tim Kaine (D-VA), for instance, alluded to the reality that not only does the US have the most coronavirus deaths in the world, but also a death rate that’s on the high end of the spectrum, and asked Fauci if that means the US has to do better.

“Of course,” Fauci said. “You always have to do better.”

Sen @timkaine: Dr Fauci, the coronavirus death rate in the US when compared with other nations is unacceptable, isn’t it?

KAINE: Would you say the US has to do better?

FAUCI: “Of course. You always have to do better.” pic.twitter.com/EUtroCnE6l

That may seem like merely stating the obvious, and in a normal situation it would be. But as Trump tries to turn reality on its head by falsely telling Americans that the federal government’s coronavirus response has been the toast of the world, Fauci acknowledging that things aren’t as rosy as the president wants people to believe had an element of speaking truth to power.