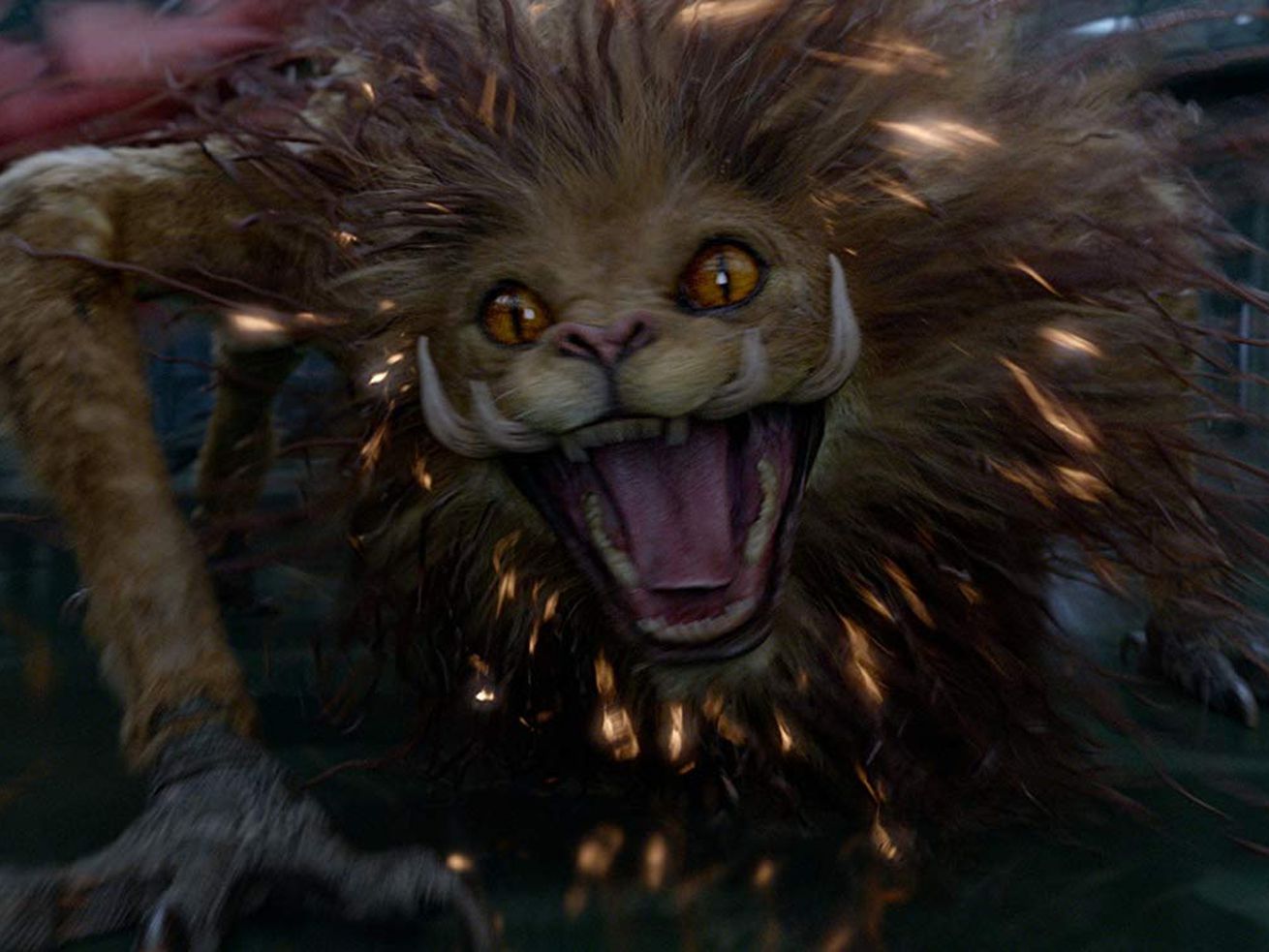 The second film in the new Harry Potter franchise gets lost in an empty labyrinth of subplots.

As a deeply jaded Harry Potter fan, I sometimes have to make a conscious effort to focus on the positives. So I think it’s worth noting that I didn’t have to try too hard to find some positives to focus on in Fantastic Beasts: The Crimes of Grindelwald.

The second installment in the Harry Potter prequel series is now in theaters, and with it, author J.K. Rowling, who writes the screenplays, has introduced a host of serious wrinkles in her own established universe. The plot is confusing, disjointed, and seemingly devoted to setting up a convoluted storyline that will play out in future installments.

Watching the film feels a bit like being dropped into the middle of a very thick novel that’s full of words whose meanings you don’t know. And this holds true no matter your level of Harry Potter fandom; Rowling does a ton of worldbuilding on the fly, and expects viewers to roll with it and figure things out as they go. That’s difficult to do, and it makes The Grimes of Grindelwald hard to review, because it’s so obviously laying the foundation for some future film.

The Crimes of Grindelwald picks up where the first Fantastic Beasts film left off: with the dark wizard Grindelwald (the controversial Johnny Depp) sitting in jail after infiltrating the American magical congress. (Why he wanted to infiltrate it in the first place wasn’t ever fully explained, but it clearly involved being generically evil.)

In the opening moments of the new film, Grindelwald dramatically escapes prison, leaving Professor Dumbledore — an inexplicably de-camped Jude Law — to decide how to respond. Dumbledore, who was canonically in love with Grindelwald as a teen and may have once been in a relationship with him, is either unwilling or unable to fight him now, in adulthood, so he sends our hero Newt Scamander (Eddie Redmayne) to battle Grindelwald in his stead. This involves finding the one person who can effectively fight him: Credence (Ezra Miller), who we encountered in the first Fantastic Beasts film as a frightened orphan, confused about his identity and unaware of his own tremendous magical abilities.

The Crimes of Grindelwald then follows Newt as he attempts to locate Credence in Paris. It also follows Grindelwald as he attempts to locate Credence, and as he launches what must be the most hastily assembled and disturbingly muffled political allegory ever thrown together by a writer capable of much greater nuance than this. The driving force of The Crimes of Grindelwald’s plot — though it’s difficult to refrain from putting sarcasm quotes around “plot” — is for Newt to find Credence before Grindelwald can, because the implication is that whoever gets to Credence first will have the best chance at deploying his magic as a weapon for their side. (More on what those sides are fighting for in a moment.)

Along the way, the movie gets sidetracked by a tangled web of subplots. Characters keep tossing around fragments of prophecies whose origins are never properly contextualized and whose predictions are never fully explained. There are baby-killings, cases of mistaken identity, mysterious characters with mysterious backgrounds, dramatic flashbacks, and several different moments that disrupt the established canonical timeline of the Harry Potter universe in ways that are sure to break the brains of Harry Potter fans across the internet. There’s even a giant Chinese fire-dragon cat-thing that needs to be dealt with. (It’s cute!)

But none of these subplots further the narrative beyond providing an occasional dramatic reveal that ultimately goes nowhere. Characters show up, deliver backstory and dramatic revelations, and then, more often than not, die. The effect is basically that watching the The Crimes of Grindelwald feels like staring at that spinning top from Inception for two hours straight before eventually realizing it’s never going to fall over, because it doesn’t have enough mass to upset its inertia. There’s just no story, no substance . And what little substance there is essentially forms dramatic exposition for the next Fantastic Beasts movie.

It’s especially unfortunate that this wheel-spinning for the sake of expository setup was one of the chief complaints of critics who reviewed the previous Fantastic Beasts film. But the previous film had so much more actual plot than this one that by comparison, The Crimes of Grindelwald feels extra-flimsy and empty. At least in the previous film, there was a set of clearly achievable objectives involving the rounding-up of a bunch of fantastic beasts!

Fantastic Beasts represents an evolution for the Harry Potter franchise in a few interesting ways. In other ways, not so much.

One of the things I continue to admire and love most about the Harry Potter film franchise in its latter-day installments is how director David Yates, who has helmed all of the movies since the fifth one in the main franchise, remains fully committed to J.K. Rowling’s vision, no matter how obscure it might get. And let’s be real, Fantastic Beasts is a totally new franchise arc that’s headed who-knows-where, and Rowling’s vision is deeply obscured in The Crimes of Grindelwald.

Yet Yates, with the trademark mix of sensitivity, detail, and emphasis on sumptuous worldbuilding that he’s deployed in each of the six Harry Potter films he’s directed so far, manages to make things work on his end. The Gilded Age wizarding world, Art Deco with a splash of steampunk, moves from vintage New York to London and Paris over the course of the film, and it looks as lovely and inviting as ever.

While the magical elements can feel a bit paint-by-numbers at times, it’s clear that Yates, Rowling, and longtime Harry Potter screenwriter-turned-producer Steve Kloves are still thinking deeply about how to keep the details of this world feeling unique and magical. And I think, for the most part, they do feel magical; that is, they feel like a world I enjoy spending time in, even when I’m exasperated by the lack of story.

It helps that Fantastic Beasts’ characters are, for the most part, characters I enjoy watching. It’s hard to overstate just how unique Redmayne’s Newt Scamander is within the annals of fictional heroes. Not only is he plainly and unremarkably neurodivergent, but he subverts typical onscreen representations of masculinity in refreshing and unexpected ways. Rowling seems to have written him by consciously sidestepping the tropes of toxic masculinity, and the result is that Newt, however overshadowed he is by plot dramatics, always feels like the answer to the questions she’s trying to ask about violence and propaganda and side-taking.

Unfortunately, those questions aren’t very well-posed. Grindelwald’s dark wizardry is a tangled mishmash of World War I-era fashion, militant Fascism disguised as leftist rhetoric, and concern-trolling about Nazis and World War II, designed to appeal to pureblood wizards of all races, including at least one character who’s coded Jewish. What Grindelwald’s actual politics are beyond wanting Muggle genocide is anyone’s guess, but given that this film is arriving during one of the most politically confusing and polarized eras in recent history, it’s mildly worrying that Grindelwald’s actual message is as vague and “insert-your-own-ideology” as possible.

And then there’s Grindelwald himself. The sheer number of characters in The Crimes of Grindelwald means we spend less time with Newt and his core group of friends than before, but we arguably spend the most time with Grindelwald. And though Johnny Depp’s performance is notably subdued (for Depp, at least), Grindelwald still feels like the series’ flamboyant gay villain (a stereotype that’s exacerbated further due to how toned-down and butch Dumbledore has become) — he’s always standing a little too close to his potential allies, always tacitly seducing them into joining him on the dark side, always being framed by the film as representing something irresistible and innately evil.

It’s weird and uncomfortable to watch, and I wish I felt like more of that weirdness and discomfort is because Grindelwald is a Nazi and not because he’s queer. (All of this potential association of Grindelwald’s evilness with his queerness is built into the narrative of the Harry Potter books, but given that so far, there are only two known queer characters in the entire wizarding universe, and given that one of them is an evil genocidal Aryan and the other one is in love with the evil genocidal Aryan, we can be forgiven for feeling a little queasy about how things are playing out.)

But commenting too critically on The Crimes of Grindelwald could, at this point, amount to unfair speculation. Rowling is clearly in the middle of juggling eight or nine plot points at once, as she loves to do, and it seems somewhat futile to do anything more than stand back and let her at it, until we finally have a coherent 10-hour film that we can judge as a whole. What we clearly don’t have in The Crimes of Grindelwald is a movie; instead, we have a heavily fragmented, not terribly coherent piece of something larger.

Whether that other, larger thing eventually coalesces into the sparkling magical story we came for, or whether it disapparates into oblivion, remains to be seen. But for Harry Potter fans who’ve put their trust in J.K. Rowling for all this time, the best thing I can say about The Crimes of Grindelwald is probably this: It won’t make you want to put your wand away any time soon.