THE super-fast 5G technology is here but only for two network providers and each operates in select cities – for now.

But what is it, how is it different to 4G, and most importantly, how do you get it? Here’s what we know.

What is new with 5G?

There is no official definition of 5G but it is thought to be similar to its predecessors, 3G and 4G.

It will be a wireless connection built specifically to give devices – like your mobile phone or tablet – a faster and more reliable internet connection.

The “G” in 5G stands for “generation” – that’s why it is known as “next-generation technology”.

This will mean 5G will be able to carry more data which therefore provides greater coverage.

Companies such as BT, Vodafone and Nokia have also given the development of 5G their support.

How is it different to 4G?

The exact speeds are yet to be finalised.

The Next Generation Mobile Networks alliance states that for something to be considered 5G it must offer faster data rates.

NGMN is hoping for speeds of 20Gbps and one millisecond latency.

This would provide download speeds which are 40 times faster than 4G.

Typical 4G speeds today will typically fall between 50Mbps and 100Mbps, but early 5G speeds will raise this bar to several hundred megabits-per-second.

NGMN believes 5G would provide an era of being able to download files in the blink of an eye – vital to the success of smart homes and self-driving cars.

According to Vodafone’s own estimations, 5G will work at average speeds of 150-200Mbps, and peak speeds will reach 1Gbps.

Early tests by The Sun on EE’s network have revealed speeds in central London of around 400Mbps (megabits per second). 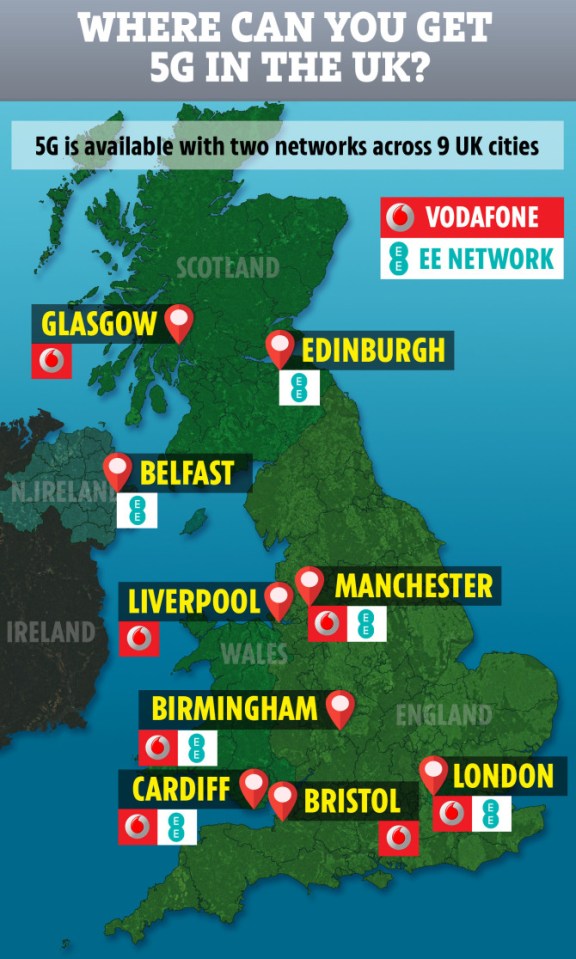 How do I check if the 5G network covers my area?

You can check whether you’re covered here.

This will include the “busiest parts” of Bristol, Coventry, Glasgow, Hull, Leeds, Leicester, Liverpool, Newcastle, Nottingham and Sheffield.

Vodafone turned on its 5G network on July 3.

Vodafone currently only serves seven cities across the UK – and only select areas in those cities.

This status checker page lets you find out if there’s 5G coverage where your house is: Network Status Checker.

On August 26, Digital Secretary Nicky Morgan pledged a radical overhaul of planning laws to make Britain’s countryside communities among the first to benefit from 5G internet.


What is 5G and when is it launching?


How do you get 5G coverage, what is the price and how is it different to 4G?


What is Facebook’s dating app, when is the UK release and how is it different?


Has my Gmail been hacked? How to check if your email has ever been hacked and when


Why is Alexa flashing yellow, green or red? What the colours of your device mean


How was Fortnite made and who was the man with the vision?

Will other providers launch 5G?

Three switched on its 5G network on August 19 – though it’s not available on your phone just yet.

In London, Three’s 5G broadband is now available in a very limited selection of areas – Camden, Camberwell and Southwark.

Three is launching the service with a single £35-a-month plan that offers “truly unlimited” access on a one-year contract.

O2 has promised to launch 5G in six cities by October – followed by another 14 before the end of 2019.