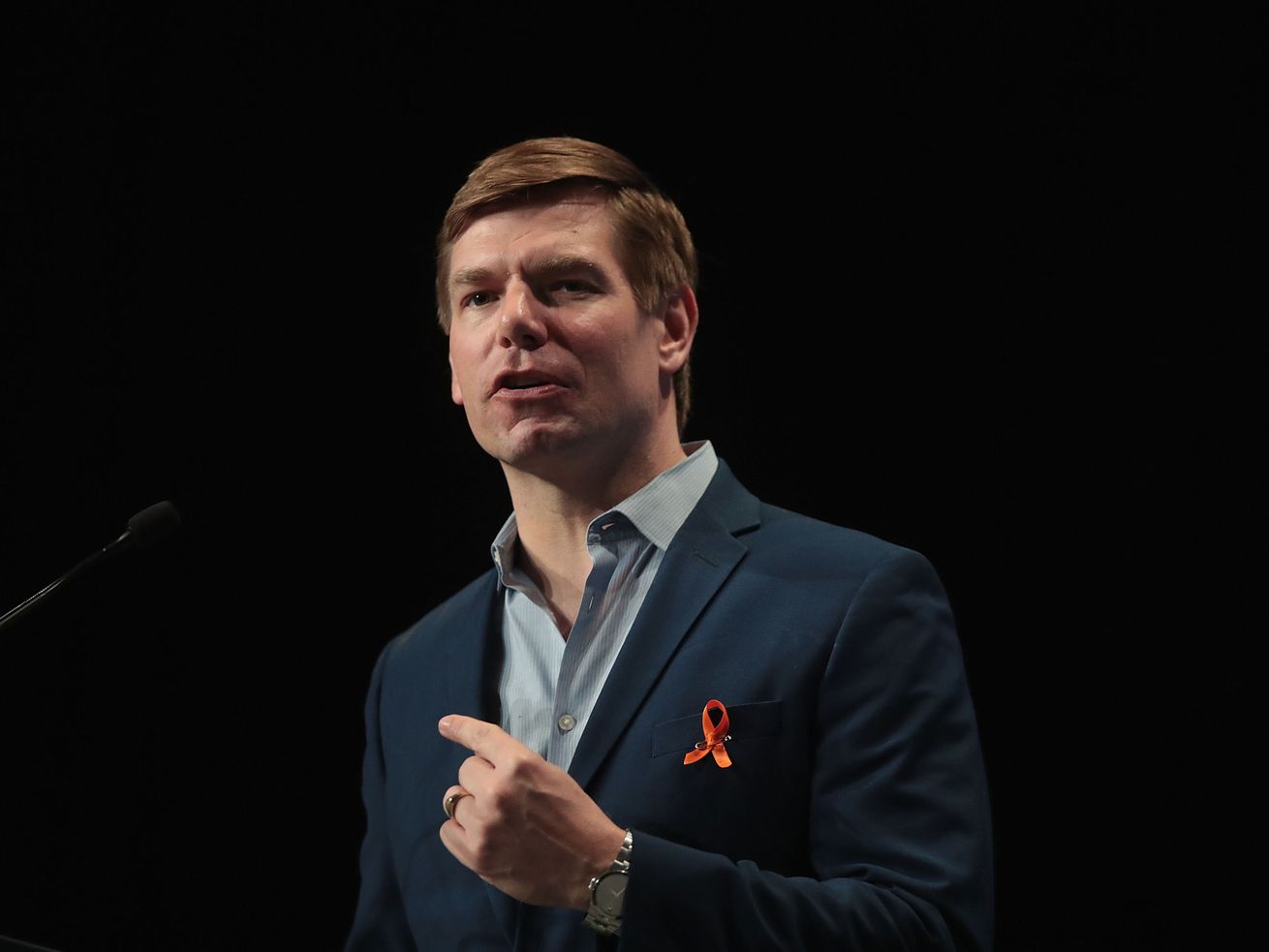 Avid followers of Trump-Russia coverage on cable news are probably at least acquainted with Rep. Eric Swalwell, the California Democrat who’s a member of one of the House’s leading investigatory panels.

But in the context of the 2020 presidential race, Swalwell, who sits on the House Intelligence Committee, is one of several lesser-known Democrats in the running, along with current and former Reps. John Delaney, Tim Ryan, Tulsi Gabbard, and Seth Moulton.

Swalwell kicked off his candidacy with a message about the forgotten men and women.

“I talk to teachers and truckers and nurses, and they feel as if they’re just running in place,” he said, adding, without much specificity, that he would offer “bold” leadership.

Swalwell’s politics is probably best described by his longtime support of Martin O’Malley, the former Baltimore mayor and Maryland governor whose 2016 presidential candidacy was mostly a failure to launch, quickly overshadowed by Hillary Clinton and Bernie Sanders. Swalwell worked on O’Malley’s mayoral, gubernatorial, and presidential campaigns. He was the only House member to endorse O’Malley in 2016; Swalwell said he was attracted to O’Malley’s “bold,” “results-oriented, data-driven,” and bipartisan approach to governing.

It’s not hard to tell that Swalwell, an Iowa native who represents a safely Democratic San Francisco Bay Area district, has political ambitions beyond his current House position. A former city council member in Dublin, California, and Alameda County prosecutor, Swalwell won his House seat in 2013 with a major splash.

He unseated 20-term incumbent Pete Stark, who at the time was one of the most powerful California House Democrats. He did it by painting Stark as too out of touch with the district and using Stark’s infamous temper against him (Stark once called a female lawmaker a “whore,” a black official “a disgrace to his race,” and a male lawmaker a “little fruitcake.” The police were called to a House committee meeting in the last instance.) Still, few thought a Swalwell victory plausible, particularly in the Bay Area, where entrenched Democratic lawmakers have run the show for decades.

Since his win, he’s since gotten himself on the House Democratic leadership team as well as a spot on two high-profile committees: the House Judiciary Committee, which has been charged with investigating Trump’s immigration policy, and the Intelligence Committee.

But even the most generous reading of a path to the nomination for Swalwell seems tenuous. He’s not the only Californian in the race; Harris, a much more well-known statewide office holder with a more robust fundraising structure in place, is already running. He’s not even the best-known young guy in the race; Buttigieg has increasingly taken up that mantle.

That said, Swalwell has told the San Francisco Chronicle that he is aiming to “win” — he’s “not trying to sell a book or get a leadership position anywhere else,” he said.

Swalwell is a liberal, and were it not for his presidential ambitions, he would largely blend in as one in the sea of liberal white men who still comprise the majority of House Democrats.

Yet there’s been some debate about what kind of liberal he is. Progressive California Rep. Ro Khanna, who once considered running for Swalwell’s seat and is now one of Bernie Sanders’s top advisers, has argued that Swalwell won his seat by challenging Stark well from the right.

Swalwell’s record is pretty generic. He champions the “green economy” and a “health care guarantee.” He’s said he supports the broad principles of the Green New Deal, saying it’s important to reorient jobs away from fossil fuels, and he thinks gun violence prevention should be a more prominent issue.

His presidential campaign platform consists of a federal buyback and ban on semiautomatic weapons. On education, he supports interest-free federal student loans and debt-free college for public university students in a work-study program. He holds the almost-expected progressive beliefs of supporting same-sex marriage and abortion rights. In the House, he established a group of young Democrats dedicated to debating issues relevant to millennials, called the “Future Forum.”

He doesn’t support a single-payer Medicare-for-all program but rather a “Medicare for all who want it” public option that would compete with private insurance companies.

In Congress, Swalwell is probably best known for his investigatory role as a member of both the Intelligence and Judiciary committees, which have been looking into Trump’s foreign relations and immigration policy, respectively.

Notably, that aspect of his experience has also gained a reputation among Republicans, who openly chastise him for using his committee positions to raise a national presence, whether on TV or at the hearings. At one hearing with then-acting Attorney General Matthew Whitaker, Georgia Republican Rep. Doug Collins publicly rebuked Swalwell, telling him to “ask questions that are actually part of this [hearing] instead of running for president.”

“I think I will be in the top tier of a field of candidates with national security experience,’’ he told Politico.