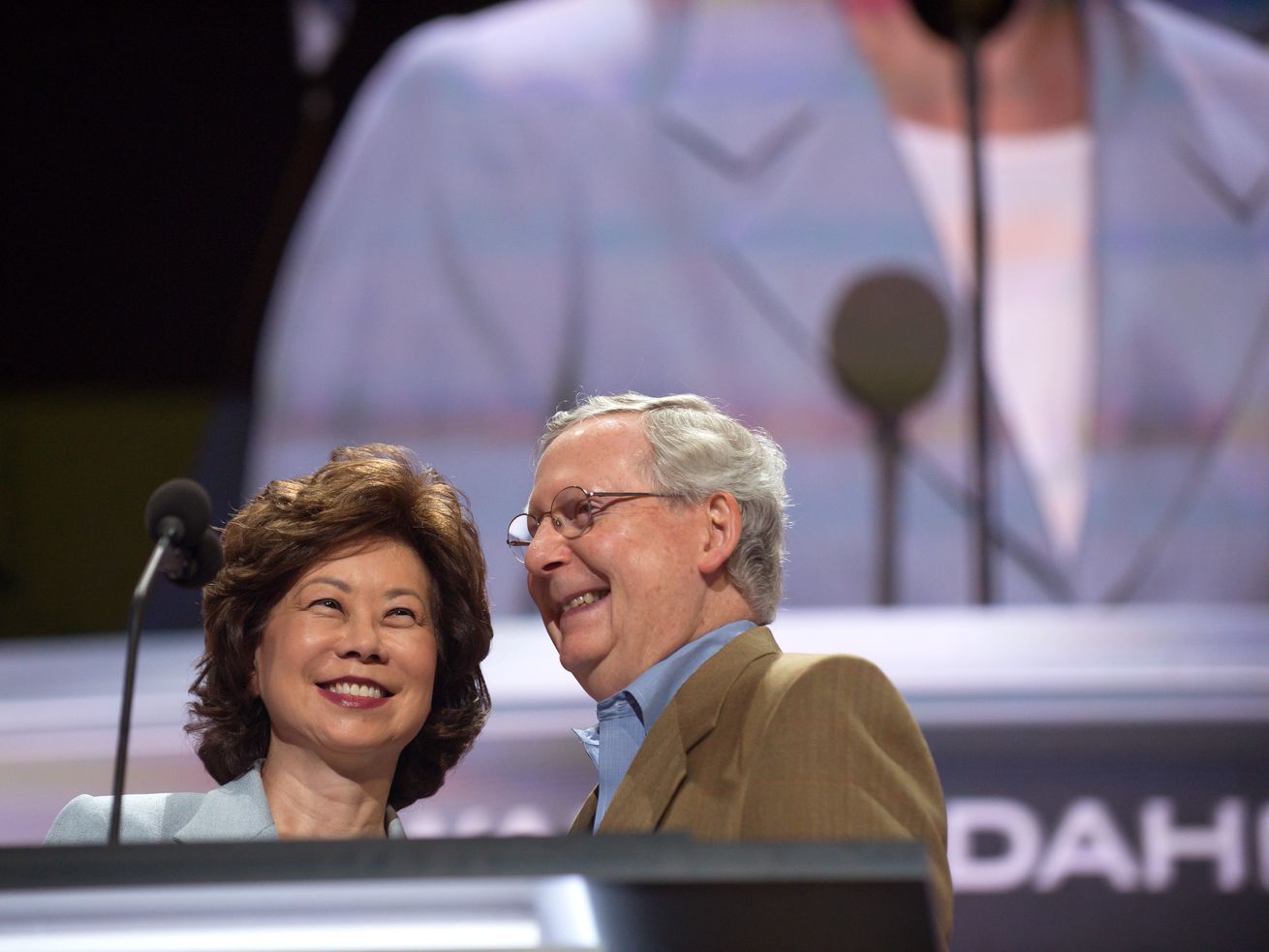 Chao oversaw grant money that could benefit her husband politically. Is it an ethics violation?

While referencing infrastructure projects this past April, Senate Majority Leader Mitch McConnell made a seemingly charming quip about his personal life. “My roommate has been involved in this issue for a couple of years,” he said, when asked about a potential funding package to overhaul the country’s crumbling roads and bridges. The “roommate” he’s referring to is, of course, Transportation Secretary Elaine Chao, who also happens to be his wife.

Although this reference was intended as a joke in his April remarks, a recent Politico story casts the effect of their personal ties in a potentially more nefarious light.

The report, from Tucker Doherty and Tanya Snyder, notes that Chao has overseen the allocation of nearly $80 million in federal grants to Kentucky during her time as transportation secretary, designating a special intermediary to help the state navigate this funding process, a resource that few states have. It raises questions about whether Chao — who oversees funding for everything from highway construction to port development at the Department of Transportation — was treating Kentucky differently due to her relationship with McConnell.

DOT refuted such implications in the piece, though ethics experts note that Chao and McConnell’s relationship make such grant allocations — and concerns about if there was favoritism involved — especially murky.

What’s more, the concerns about Chao and ethical impropriety isn’t limited to these grants. Just last week, a New York Times story highlighted how Chao had attempted to include members of her family, who own a major shipping company, in meetings with Chinese officials that she was set to attend as a Cabinet secretary. Those meetings were ultimately canceled in the wake of concerns voiced by some US government officials, though another trip was scheduled at a later date.

While Donald Trump made “Drain the Swamp” one of his rallying mantras in 2016, many of the Cabinet officials he’s appointed have proven to be doing just the opposite.

According to ProPublica, at least 188 former lobbyists have been appointees in the Trump administration. Additionally, several Cabinet officials including former Environmental Protection Agency Administrator Scott Pruitt and former Health and Human Services Secretary Tom Price, have been ousted for their attempts to use their power — and federal dollars — to secure everything from chartered flights to extensive security detail.

Now Chao is the latest administration official under scrutiny.

According to the Politico report, questions about ethical conflicts center on the number of grants DOT has approved for projects in Kentucky, many of which could benefit McConnell politically as he hits the campaign trail for his 2020 reelection bid in the southern state.

Chao has helped greenlight at least $78 million in grants for construction projects in Kentucky, Doherty and Snyder write. Additionally, she helped designate a special go-between that worked with McConnell’s office on Kentucky-related projects:

Chao’s aide Todd Inman, who stated in an email to McConnell’s Senate office that Chao had personally asked him to serve as an intermediary, helped advise the senator and local Kentucky officials on grants with special significance for McConnell — including a highway-improvement project in a McConnell political stronghold that had been twice rejected for previous grant applications.

Other states do not have access to such an intermediary, Politico noted, suggesting that Inman’s role may have helped advance priorities important to Kentucky that would also happen to be politically favorable to McConnell.

In response to the piece, McConnell argued in a statement to Politico that he saw his role as both a top Senate lawmaker and a member of the Senate Appropriations Committee helping raise Kentucky’s profile and garner benefits for his constituents. In that statement, however, he did not acknowledge his wife’s role as transportation secretary.

“Every single day, Kentuckians from across the Commonwealth contact me with their concerns,” McConnell said. “As Senate Majority Leader and a senior member of the Appropriations Committee, I am able to ensure that these issues — both large and small — are part of the national discussion.”

Meanwhile, a representative from the Transportation Department told Politico that the grants that were allocated to projects in Kentucky, including $67 million to fix roads in Boone County, made up a small fraction of those that had been doled out during Chao’s time as secretary. According to the spokesperson, Kentucky had received just five of 169 grants that had been given to different states.

“This online post intentionally misleads readers, misrepresenting the grant application process and disregarding key facts,” a spokesperson for the DOT told the Hill.

Ethics experts say that Chao and McConnell’s efforts on this subject don’t look great, but that more evidence would likely be needed to identify a definitive ethics violation.

“There’s nothing illegal about her steering those funds to her husband’s home state, and her home state, as long as things are aboveboard,” the Brookings Institution’s John Hudak explained to Politico. “The question, though, is how do you deal with conflicts of interests? And this is a clear conflict. … Even if it’s not legally so, these are political offices, so the optics of this are important. In a business setting, you would put firewalls up to prevent those types of bad optics.”

“At this point, we don’t have enough information to say that it’s a criminal violation. It smells bad, but if and until we have more information, I would not be able to say that we’re looking at a slam-dunk,” George Washington University law lecturer Jessica Tillipman told Vox.

Tillipman added, however, that there are steps Chao could have taken to avoid this scrutiny — for example, consulting the independent ethics officials that each federal agency has who can vet various efforts for potential conflicts.

Walter Shaub, the former head of the Office of Government Ethics, was among those who had a much harsher take, however, suggesting that such activity could “lead to the impeachment of a corrupt official.”

This is the sort of thing that should lead to the impeachment of a corrupt official — that is, if her corrupt husband weren’t in a position to block that impeachment. We are now a full-fledged banana republic. We have nothing to teach the rest of the world except what not to be. https://t.co/UbLPaGM9nK

Before any sort of definitive action like that could be taken, however, Tillipman noted that more evidence might be needed. The Trump administration, previously, has dragged its feet on offenses by other Cabinet-level officials and only acted when much of the information became overwhelming. “This administration has seemed to turn a blind eye to these allegations in the past, unless it’s become untenable like a Pruitt, [former Interior Secretary Ryan] Zinke, or Price,” she said.

The focus on Chao and McConnell’s relationship also comes as Democrats dial up their attention on political corruption, a cornerstone of their landmark HR 1 bill, which would give the Office of Government Ethics more enforcement capabilities. Democrats will likely hammer McConnell on ethics questions as 2020 approaches, though it’s unclear how much of an impact it would actually have on his candidacy given Kentucky’s strong Republican lean.

“It certainly can’t help him, and I’m certain his opponents will try to use it,” says Tillipman. Still, “it’s a really red state, so I think it’s a high hurdle,” she added.