DONALD Trump is on his way to the UK for his first official state visit which is set to be the most expensive in British history.

The US President was pictured boarding Air Force One with his wife Melania, 49, before jetting off to London to meet the Queen.

The operation to protect Trump and his 1,000-strong entourage is expected to cost taxpayers an estimated £40million in security alone.

Trump will be accompanied by a motorcade and helicopters during his state visit to the UK.
A ring of steel has been put in place outside the US Ambassador’s residence in Regent’s Park ahead of Trump’s much-anticipated arrival, with cops implementing strict safety measures.

The President will also enjoy the protection of state-of-the-art security equipment and staff. 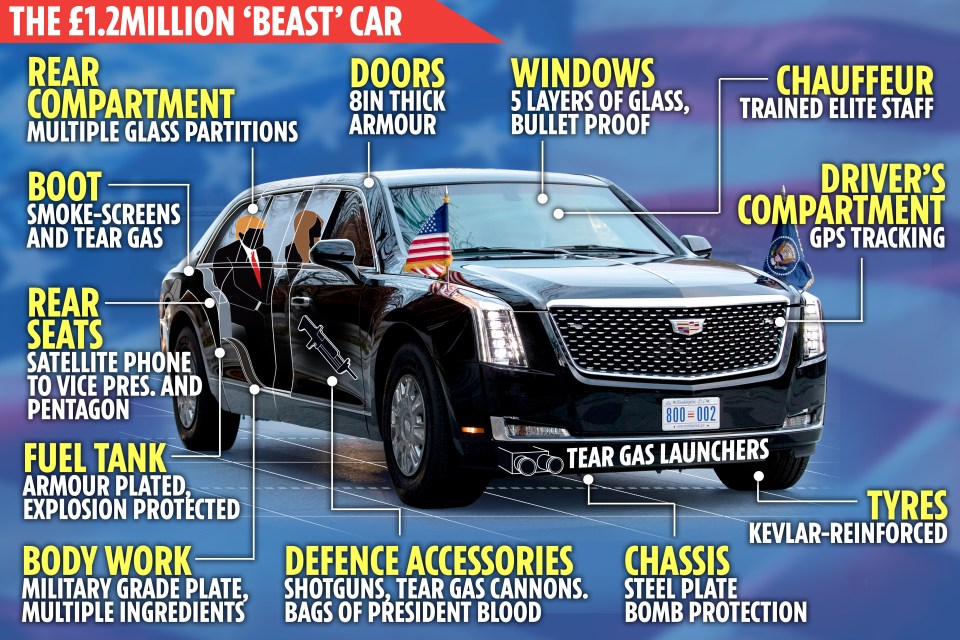 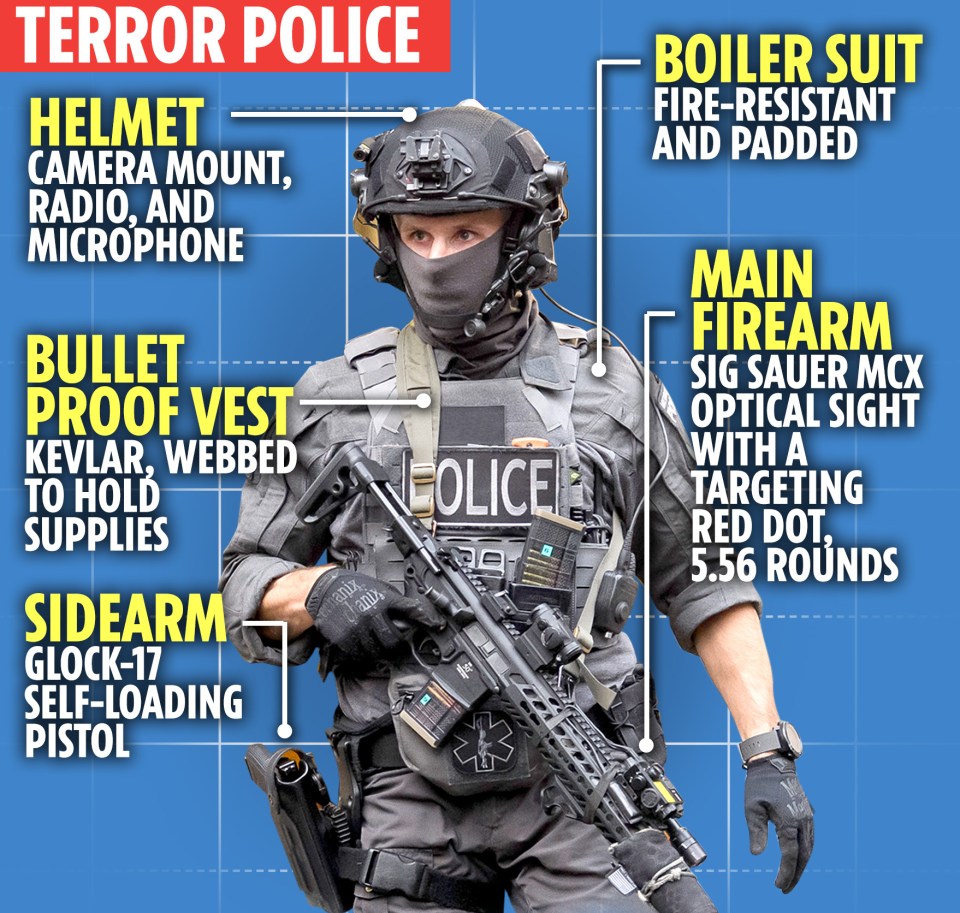 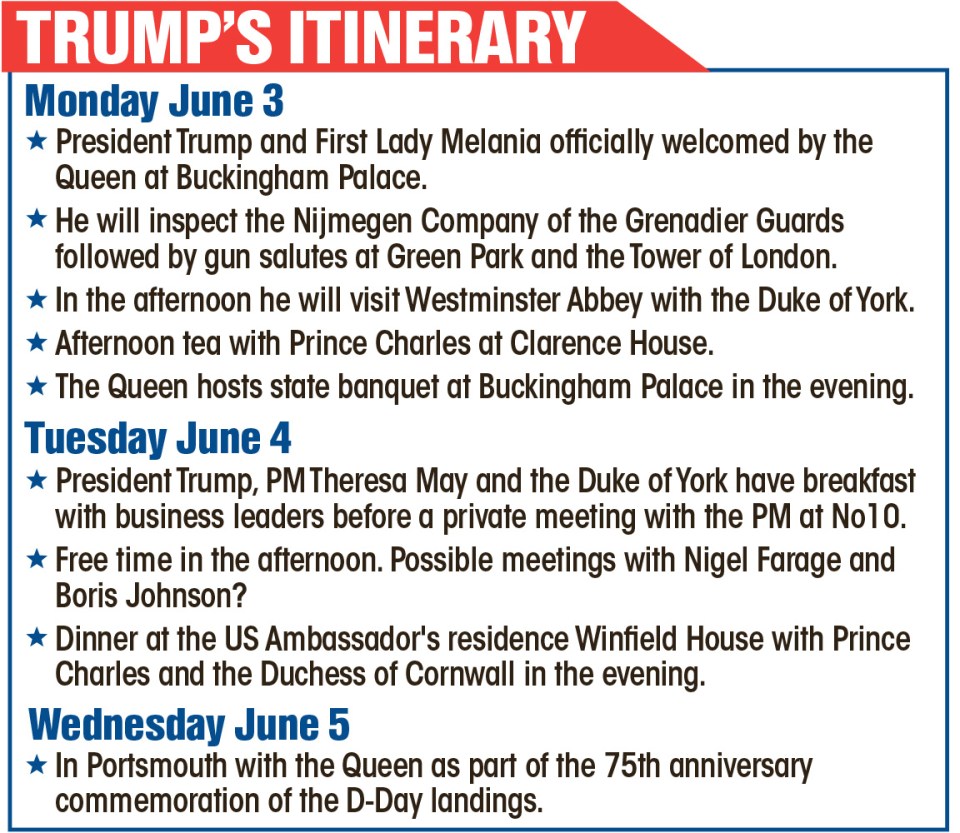 An eight-foot-high temporary steel mesh fence has been placed on the road between Winfield House and London’s Central Mosque.

Tens of thousands of protesters are expected to demonstrate against the US president in London during his visit.

Demonstrators have vowed lay siege to Downing Street, with protests still expected to take place despite police imposing a ban on marching down Whitehall.

The infamous inflatable baby blimp, which flew during his last visit to London, is also expected to pay another visit.

The Metropolitan Police said it would prevent the demonstrators marching past Downing Street from Trafalgar Square and into Parliament Square.

Activists are set to hold a “Carnival of Resistance” to disrupt the president’s visit.

Police and security units have been preparing for Trump’s visit by enforcing strict privacy features for the US president’s safety.

Up to 10,000 police officers will be drafted into London as part of a £25million security operation during the state visit.

The Metropolitan Police said it had “a very experienced command team” leading the operation as the force geared up to deal with the visit itself and expected protests.

During the state visit, which begins on June 3, protesters are again hoping to fly the Donald Trump blimp, which depicts the American leader as a baby.

When Trump visited Britain last year, he avoided London – where an estimated 250,000 people marched against him.

It was estimated that Trump’s UK visit in 2018 cost the taxpayer approximately £18 million to ensure his safety.

Met Police said: “Protesters will not be marching past Downing Street at any point.

“This is a multi-faceted security operation, and whilst the Met has a responsibility to ensure the right to peaceful protest, this needs to be balanced with the complex requirements of this policing plan.

“We are anticipating a number of additional protests to take place across central London throughout the duration of the President’s visit.”

Up to 10,000 police officers will be drafted into London as part of a £25million security operation[/caption]

Although security will be extremely tight for the three-day event, more than 150 people have pledged to attend a “Milkshakes Against Trump” gathering in Trafalgar Square.

The controversial event is being organised by a group called Milkshakes Against Racism.

Anti-racism protesters also plan to build a wall of cardboard to symbolically knock down, which they say represents the president’s Mexico wall and other policies, reported The Independent.

Trump will visit Westminster Abbey and lay a wreath at the Tomb of the Unknown Warrior.

On the second day, he is set to hold talks with Theresa May at Downing Street.

The pair will attend a business breakfast with senior UK and US business leaders, before they hold their last joint press conference together.

President Trump will land on British soil, and his arrival has been timed to coincide with the 75th anniversary of D-Day.

He will be accompanied by his wife Melania and his adult children, with whom he hopes will meet the Queen.

On his first night he will enjoy a state banquet dinner, with his wife and potentially his adult children and their spouses, according to US news reports.

The dinner will be held at Buckingham Palace, and he will meet the Queen.

It will involve approximately 150 guests who all have cultural, diplomatic or economic links to the US.

Trump will visit Westminster Abbey and lay a wreath at the Tomb of the Unknown Warrior.

On the second day, he is set to hold talks with Theresa May at Downing Street.

The pair will attend a business breakfast with senior UK and US business leaders, before they hold their last joint press conference together.

Prince Charles will invite the President to Clarence House for tea, but the Duchess of Sussex will not join the rest of the royal family.

Trump is expected to travel to Southsea Common in Portsmouth with Theresa May to attend the D-Day anniversary events.

The commemoration is set to take place in Portsmouth, and the Queen is set to attend with the Prince of Wales.

Mrs May is expected to travel to Southsea Common in Portsmouth with Trump to attend the D-Day anniversary events.

Prince Charles will invite the President to Clarence House for tea, but the Duchess of Sussex will not join the rest of the royal family.

Trump yesterday backed Boris Johnson in being Britain’s next PM — and revealed other Tory leadership hopefuls have also begged for his backing.

His bombshell intervention into the Conservatives’ contest — just a few days before MPs start voting — is a major breach of protocol.

It risks sparking a full-blown diplomatic rift between London and Washington if the mop-haired former London mayor fails to take the Tory crown.

While stopping short of offering his full endorsement, Mr Trump told The Sun: “It’s something that I find very interesting.

“I actually have studied it very hard. I know the different players.

“But I think Boris would do a very good job. I think he would be excellent.”