DOG The Bounty Hunter’s daughter Bonnie has called on fans to “let him be happy” after he confirmed his engagement to new girlfriend Francie Frane.

Writing on Instagram, Bonnie shared: “Please just let my father live in peace. Let him be happy, please for the love of god let him be.”

“My father has gone through so much this past year without my mother. It’s been extremely difficult to see one parent pass, and the other so intent on following.

“My father deserves to be happy. He’s still got my mother’s name on his chest, he’ll never forget her and the love she gave him. She would be happy my father is in love and finding peace.”

The Sun revealed the engagement on Monday with an exclusive interview with the couple, who began dating earlier this year.

The pair revealed how Dog, 67, got down on one knee and popped the question in a romantic candlelit proposal at their home in Colorado. 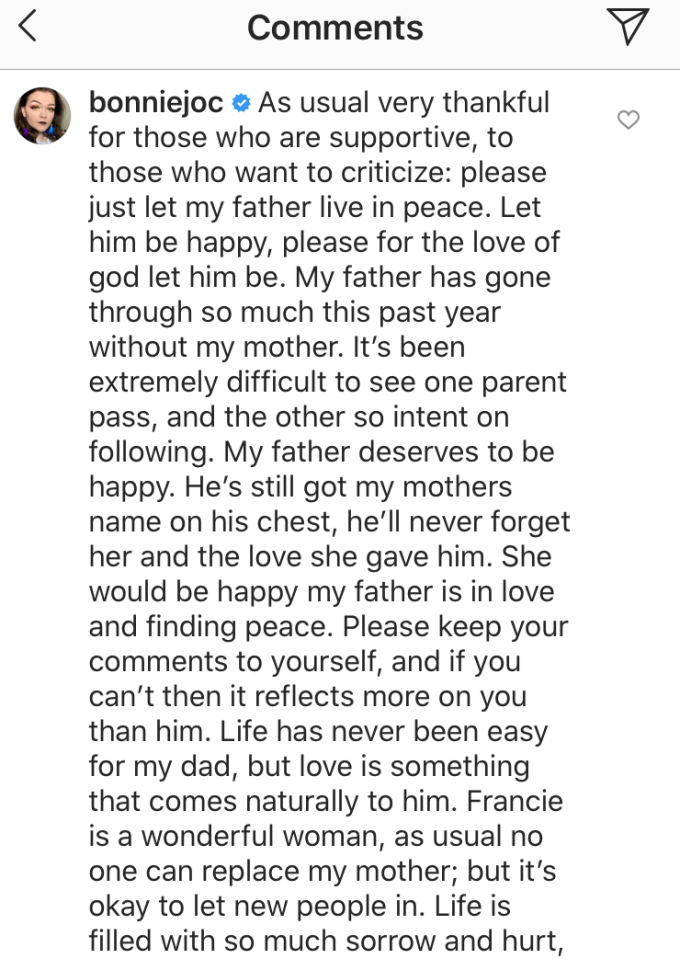 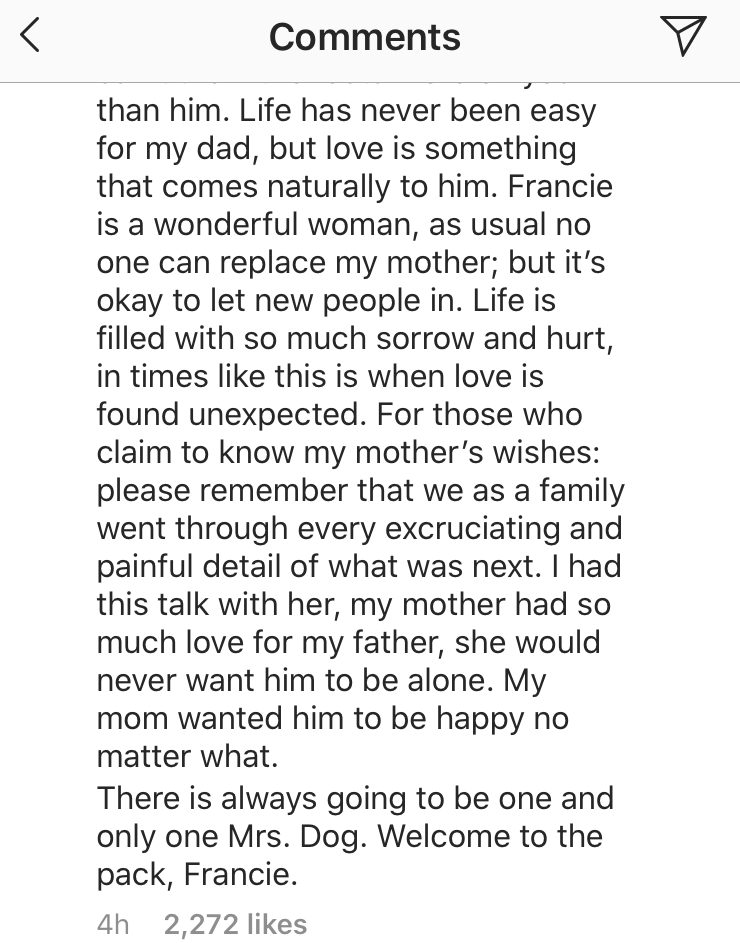 Writing on one of Dog’s posts on the social media site, Bonnie also asked critics to “please keep your comments to yourself” before welcoming Francie to the family.

“Life has never been easy for my dad, but love is something that comes naturally to him. Francie is a wonderful woman, as usual no one can replace my mother; but it’s okay to let new people in,” she said.

“Life is filled with so much sorrow and hurt, in times like this is when love is found unexpected. For those who claim to know my mother’s wishes: please remember that we as a family went through every excruciating and painful detail of what was next.

“I had this talk with her, my mother had so much love for my father, she would never want him to be alone. My mom wanted him to be happy no matter what.”

She concluded: “There is always going to be one and only one Mrs. Dog.

“Welcome to the pack, Francie.”

Bonnie later opened up on Dog’s decision to remarry, after a commenter alleged that her mom’s “one wish was that [Dog] would not remarry.”

“This is something we all talked about, her feelings changed as her condition worsened,” she replied.

“We all thought she’d have more time, she put her full faith in God, but her time with us wasn’t as long as we expected. My mother wanted my dad to be happy at all costs.

“There will never be another Mrs. Dog, but there can be a Mrs. Chapman.”

Describing the romantic proposal, Francie, 51, said: “I wasn’t expecting it at all.

“I think I had gone to pick up some food and then when I came back he had all the lights turned down with just a few lights on and a bunch of candles lit.

“So I put all the food in the kitchen and I came in and he said, ‘I know that God brought you into my life and I don’t want to spend one moment of it without you’.”

Dog is close with all of his children and grandchildren[/caption]

Most read in entertainment

BROOK TO THE FUTURE

Tearing up as she recalled the special moment, Francie added: “And he got down on one knee and he opened the ring box and he said, ‘Will you marry me and spend the rest of our lives together?’

“Who can say no to that? It was wonderful.”

The couple are planning to wait until after lockdown to get married – and want all their family – including Dog’s 12 children, Francie’s two sons and their grandchildren to all share in their day.