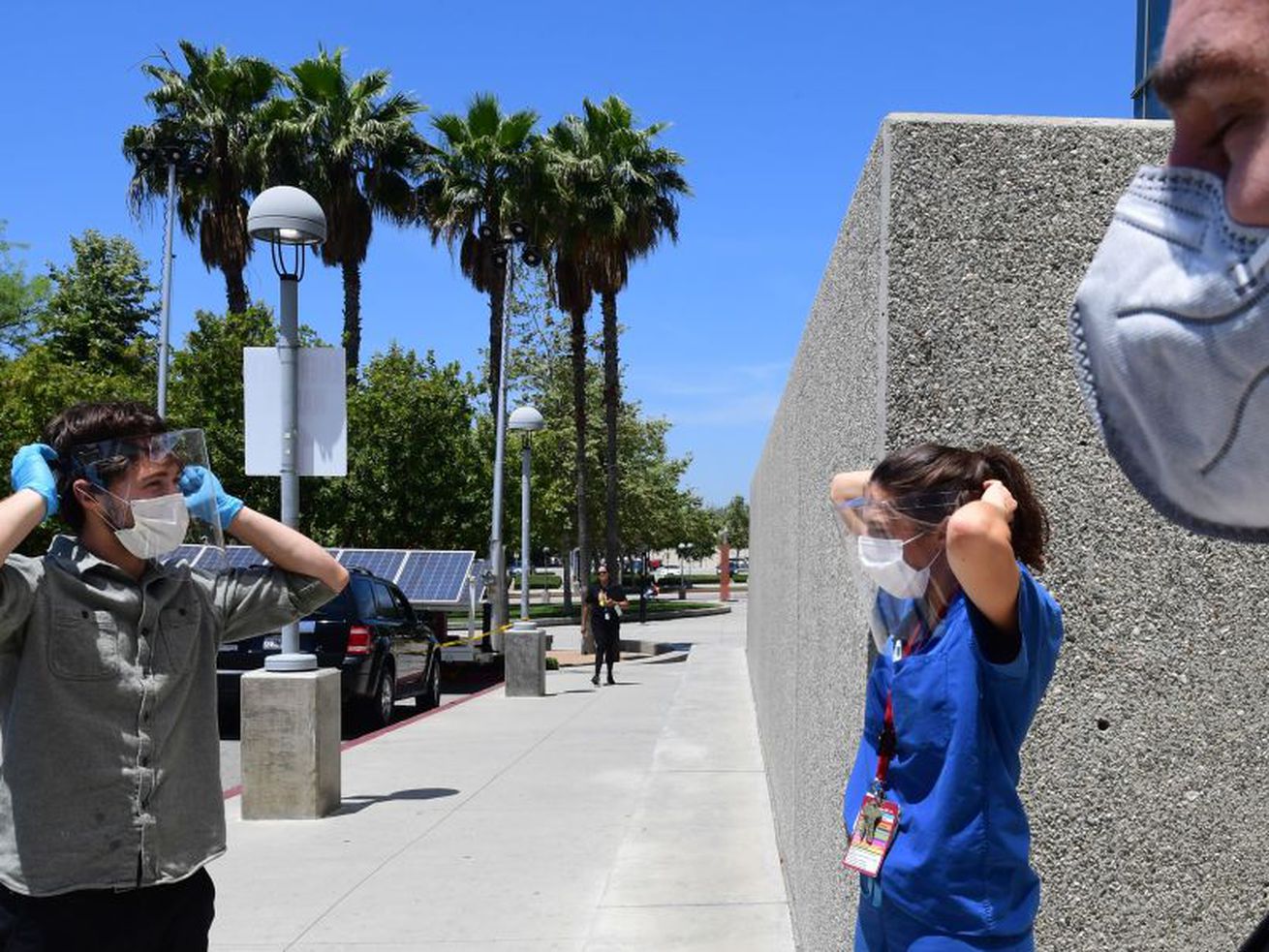 Hospital personnel at the LAC+USC Medical Center in Los Angeles, California put on face shields and N95 face masks on May 14, 2020. Many medical centers now require patients to wear masks, but some are refusing. | Frederic J. Brown/AFP via Getty Images

Health care workers don’t want to fight the mask culture war, but they’re being forced to.

The decision of some Americans to not wear a mask in public has become a political act, the latest demonstration of how misinformation is complicating the American response to the Covid-19 pandemic.

As states reopen, enforcement of new mask requirements in public spaces has led to conflict: A Target employee in California broke his arm after trying to remove two customers refusing to wear masks. In Flint, Michigan, a security guard at a Family Dollar store was shot and killed after a dispute with a disgruntled customer over wearing a face mask.

A urologist in Florida, who requested anonymity because of fear of losing his job, tells Vox he had his first patient refuse to wear a mask on May 13. The doctor works at a private clinic, which recently instituted a policy requiring all patients to wear a mask while in the building to minimize transmission of the virus. The patient was given a mask at the front desk, but refused to put it on.

“The nurse asked him to put his mask on if he wanted to be seen,” the urologist said. “He got verbally aggressive with her, saying he had a right not to wear a mask, and that we were denying his constitutional rights.” The clinic manager was summoned to speak with the patient, and explained that the mask was to protect both him and the medical staff. “He continued to refuse, so the administration asked him to leave.”

At that point, the patient called 911 to complain he was being denied medical care. “We’re a private property, not an emergency room,” the urologist said. “We’re not required to treat him, and he was not having an acute emergency. I think he just had a very poor understanding of what his rights were.”

The dispatcher declined to send an officer to the scene, but the clinic then called the police. “He ended up walking out of the building before the cops showed up.” The mask is, the urologist says, “not just for his safety. It’s for the safety of those around him.”

It’s difficult to gauge how widespread a problem mask refusal is, and it’s probably uncommon. A recent HuffPost/YouGov poll found that most Americans say they’re mostly or always wearing masks when they’re in public and around others.

Nearly 70% of Americans say wearing a mask near others is respectful. Just 8% see it as a sign of weakness. https://t.co/FyfceHGs05 pic.twitter.com/Q00Oi4bqhW

But medical professionals interviewed by Vox in three states say health care workers are at times being put at risk by people refusing to wear masks in health care facilities. This rejection of a public health measure only adds to the threats to front-line health care workers, who remain at higher risk of Covid-19 infection, especially in the continued shortage of protective gear, like masks, gloves, and surgical gowns.

What we know about the benefits of mask-wearing

Some of the potential confusion about mask-wearing stems from changing recommendations from health authorities. In February, the US surgeon general told Americans to “stop buying masks” because they allegedly would not protect users from infection, and that health care workers needed them first. By early April, however, the CDC changed its guidance to recommend people cover their faces in “public settings where other social distancing measures are difficult to maintain.”

As the CDC told NPR, recent studies have demonstrated that the virus is frequently spread when people are presymptomatic and asymptomatic. As many as 31 percent of people with Covid-19 may be asymptomatic, and people can be infected for two to 14 days before developing symptoms. Precisely because you might not know who has been infected on a crowded sidewalk, in a hospital, or a doctor’s office, other people’s masks protect you, and your mask protects them.

SARS-CoV-2, the novel coronavirus, is very, very small, and surgical and homemade masks are not as effective as the N95 masks worn by health care workers at filtering the virus. (One study shows the type of fabric used changes homemade masks’ efficacy, with T-shirt fabric performing the best of the tested materials.) Yet researchers say they still seem to reduce the transmissibility of the virus by reducing the transmission of infected droplets.

For this reason, a growing number of doctors, scientists, and public health experts are now calling for universal masking in indoor public spaces and crowded outdoor spaces. One recent study, not yet through peer review, analyzed data from Hong Kong, where near-universal masking was voluntarily adopted very early in the pandemic. It suggests coronavirus transmission may drop as much as 75 percent when surgical masks are used. And other studies suggest that if mask use were universal, it would control transmission even better than a strict lockdown. Especially as the US begins to reopen, masks will be critical tools to help control public transmission.

This evidence-based message, however, has been politicized in the US, with mask refusal by some on the right becoming a symbol on the right for personal freedoms.

A poll published May 7 by the Associated Press-NORC Center for Public Affairs Research suggests 76 percent of Democrats wear a mask when they leave home, compared to 59 percent of Republicans.

The divide is also evident in top Republican leadership. Even as two White House aides tested positive for Covid-19 — including one of President Trump’s personal valets and Katie Miller, the Vice President’s press secretary — the president recently told advisers wearing a mask would make him “look ridiculous.”

Vice President Mike Pence has followed Trump’s lead, recently refusing to wear a mask when touring the Mayo Clinic, a medical center in Rochester, Minnesota. Pence was the only person not wearing a face covering during the tour, a violation of the clinic’s policy as well as federal guidelines.

Why is *everyone* wearing a #mask *except* @VP @Mike_Pence⁉️

After Pence’s tour, Fox News’s Laura Ingraham doubled down on rejecting masks, saying, “social control over large populations is achieved through fear and intimidation and suppression of free thought.” Republican Ohio state representative, Nino Vitale, is required by Ohio’s department of health to wear a mask, but is so far refusing. “We are all created in the image and likeness of God. That image is seen the most by our face,” he wrote on Facebook,

Part of the problem, explains Saskia Popescu, an infectious disease epidemiologist, is the early mixed messaging on masks created space for doubt in the public’s understanding of masks’ benefits. “Anytime there is uncertainty, there is opportunity for harnessing that for politicization — which is frustrating, as novel outbreaks like Covid-19 inherently have uncertainty.”

She explains it’s inevitable that guidelines will continue to change as we learn more about the virus. “I hope that people want us to evolve our processes with the latest data and research,” Popescu says. “What worries me is when politics form the agenda for public health, and not the other way around.”

When health care workers have to treat mask refusers

A nurse at a VA hospital in Kansas, who requested anonymity because of fear of losing her job, also told Vox about a patient who refused to wear a mask this month. “We have a mask policy for all employees and all patients,” she says. Because personal protective equipment (PPE) supplies at the hospital are still limited, nurses are given one surgical mask per day, and patients without masks are loaned cloth masks that the hospital launders after they’ve been used.

The patient was “ranting and raving,” she says. “He said he had been trying to get it and hadn’t caught it, so he didn’t think he needed to wear a mask. I wish I could be that confident and willing to take everyone in this building’s lives into my hands.”

Despite his refusal to don a mask, the patient was cared for, although staff wore gowns and masks as if he had Covid-19. “Some [staff] were irritated,” he was treated, the nurse says, “but it’s not their job to strong-arm someone out of the clinic. What do you want them to do?”

She’s uncertain of what will happen the next time a patient refuses a mask. Although the entire VA medical system requires everyone coming into a medical facility to wear a mask, the nurse’s clinic doesn’t have security staff to enforce it. So far, all the management has done is give staff permission to wear additional PPE if patients refuse to follow the mask policy.

Ryan Shannon, an ER doctor in Florida, describes a patient refusing to wear a mask, even though she was in a room next to an immunocompromised person at high risk of severe Covid-19 illness and death. “She refused, threw the mask on the floor, and proceeded to berate myself and my staff for being a part of the ‘conspiracy and hoax’ that is Covid-19,” he wrote in a May 11 Facebook post.

After the patient’s refusal to follow guidelines, her husband insisted on sitting in the part of the waiting room designated for patients with respiratory complaints like Covid-19, instead of in his car as he was instructed. “We are at the point where social media has turned into a cesspool of misinformation. Misinformation that puts people’s lives at risk,” Shannon wrote. “We are at the point where we have politicized a pandemic. Where one’s political belief almost determines whether or not they wear a mask,” he concluded. “Just wear the bloody mask.”

Yet mask rules at health care facilities are not consistent state by state or clearly communicated to staff who have to enforce them. Medical boards of some states, like Texas, have issued clear requirements state-wide that “a mask must be worn by both the patient and physician.” But Florida, for example, appears to have not issued universal guidelines for mask-use, leaving these decisions up to individual facilities — meaning mask rules could vary from hospital to hospital.

Confusion about when and where masks should be worn is also playing out in other high-risk places that provide medical care, like nursing homes. Sue Krohn-Taylor is an administrator at a 72-apartment low-income senior living facility in the large town of Grand Island, Nebraska, where a resident has tested positive for Covid-19. She says she’s been battling some residents who refuse to wear masks, and is exhausted.

“This week, the son of one of the residents told me I was taking away their liberties by making them wear a mask in the common areas,” she says. “If they were only harming themselves, I would back off, but they are placing each and every resident here, and my staff, and our families in harm’s way.”

“I can fight the virus, but fighting the lies is what becomes overwhelming,” she says.

Lois Parshley is a freelance investigative journalist and the 2019-2020 Snedden Chair of Journalism at the University of Alaska Fairbanks. Follow her Covid-19 reporting on Twitter @loisparshley.