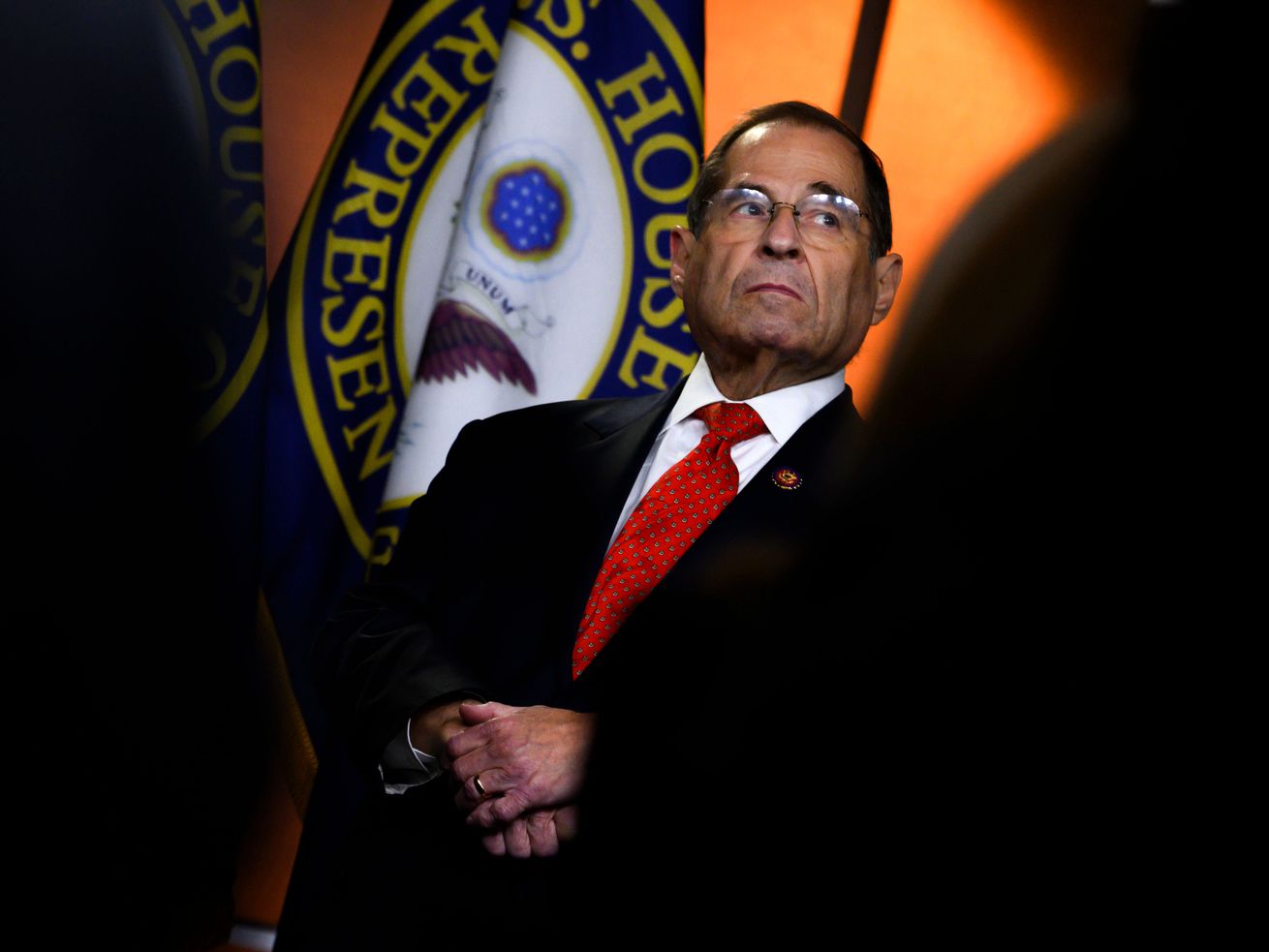 House Judiciary Committee US Representative Jerry Nadler looks on during a press conference following the former Special Counsel’s testimony before the House Select Committee on Intelligence in Washington, DC, on July 24, 2019. | ANDREW CABALLERO-REYNOLDS/AFP/Getty

Would an impeachment inquiry by any other name smell as sweet?

And when you hear that, you may wonder — wait a minute, hasn’t an impeachment inquiry already started?

After all, the chair of the House Judiciary Committee, Rep. Jerry Nadler (D-NY), went on CNN earlier this month and said his committee was in the midst of “formal impeachment proceedings.” Journalists at media outlets such as Politico, the Washington Post and The Hill all interpreted this as Nadler finally officially confirming that the long-awaited “impeachment inquiry” has begun.

But there’s a good deal of weirdness about this: namely, that Nadler never actually uttered the phrase “impeachment inquiry” in that interview, and that he continues to seem allergic to using it. Meanwhile, there has been no official vote either in the House or in the Judiciary Committee to open or approve an impeachment inquiry.

It’s the latest in Democrats’ increasingly awkward contortions over whether to impeach Trump (for Mueller’s findings or various other reasons). They know full well that, barring some truly shocking political development, an impeachment push will not win over Republicans in the Senate, meaning it will not remove Trump from office. And House speaker Nancy Pelosi is wary of forcing her Democratic members in districts that backed Trump to take a controversial, divisive vote.

But the party’s base is demanding more be done to hold Trump accountable, and there are primary challenges to worry about. So gradually, more and more House Democrats have been saying they support an impeachment inquiry (which, we should note, does not necessarily commit to supporting a final impeachment vote) — more than half the caucus now says they back an inquiry.

The House Judiciary Committee is accordingly trying to do … well, something impeachment-y. But we don’t yet know whether their effort will lead to a major impeachment battle that will dominate headlines for months or whether it will just fizzle out. And they might not know, either.

After not starting a formal impeachment inquiry, some Democrats decided they didn’t need one

Back on March 4, 2019, Nadler announced that the House Judiciary Committee would investigate “alleged obstruction of justice, public corruption, and other abuses of power by President Trump, his associates, and members of his Administration.” Nadler soon sent a plethora of document requests and subpoenas for testimony. This has been the House’s main probe into the Mueller report’s findings and other Trump scandals.

In the months since, activists and Democratic voters have increasingly demanded Trump’s impeachment (for a variety of reasons, from the Mueller investigation’s findings to Trump’s general conduct in office). The next incremental step toward that was often framed as “opening a formal impeachment inquiry” — something that was done in advance of the impeachment efforts for Richard Nixon and Bill Clinton. (I delved into the history more in this explainer.)

For months, pro-impeachment members of the Judiciary Committee demanded the opening of an impeachment inquiry— and Nadler reportedly pushed Pelosi to let him do it behind the scenes (while remaining noncommittal in public). And media organizations counted the increasing number of Democrats saying they supported an inquiry.

But in late July, the pro-impeachment House faction shifted its rhetorical strategy. They began arguing that, actually, they don’t even need to open a formal impeachment inquiry. They (accurately) pointed out that there’s no rule requiring such a thing — the current Judiciary Committee doesn’t need extra subpoena power and they can technically write and vote on articles of impeachment whenever they want.

Around this time, Nadler also announced with great fanfare that, as part of his committee’s court effort to gain access to Mueller’s grand jury material, he said the House needed to “consider whether” to approve “articles of impeachment.” But when asked if his probe should now be categorized as that long-awaited “impeachment inquiry,” Nadler demurred, saying “too much has been made of” that particular phrase.

Reporters seized on one sentence from a Nadler appearance on CNN

All this leads up to a truly strange appearance by Nadler on CNN’s Erin Burnett OutFront on August 8. (The full transcript is at this link and the video is here.)

“Breaking news, an impeachment earthquake!” Burnett said. With Nadler sitting right across the table from her in the studio but not yet speaking, she then cut to CNN’s Manu Raju on Capitol Hill and said: “Manu, your source is telling you that Nadler is there.” “Yeah,” Raju said, explaining that he has been told the committee is “moving forward to determine whether or not to recommend articles of impeachment.”

Burnett then immediately followed up with Nadler himself. “Obviously, you know, we’ve spoken with someone familiar with your thinking and we asked, do you support an impeachment inquiry? The source told CNN, ‘It’s clear as day.’” She paused. “Is it?”

So, Nadler specifically did not make the news-making announcement that CNN’s source was right and he supported an impeachment inquiry. Instead, he said people shouldn’t “get hung up on semantics” and said the same thing he’s been saying for months: that his committee has an investigation going and maybe it will eventually lead to impeachment, but maybe not.

After a couple minutes, Burnett tried again to actually make some news by spurring Nadler to use the magic “impeachment inquiry” phrase.

“A lot of people say, ‘Okay, you say let’s not get wrapped up in words,’” Burnett said. “But words can matter when they apply to what information you can get and how the American people see it, right?’”

She continued: “I’m trying to understand this. A lot of Democrats — they don’t want to be forced to vote for an impeachment inquiry. But they presumably would be willing to vote for impeachment itself if you presented them with the evidence.”

Nadler cut in here to say: “There’s no such thing. The committee has initiated an investigation into the various malfeasances —”

“So, you’re saying this is exactly the same as what we call ‘formal impeachment proceedings’ by another name?” Burnett asked.

“This — this is formal impeach — impeachment proceedings,” Nadler said.

Boom, there it was, it seemed: the promised “earthquake.” Reporters soon used this sentence to claim that Nadler had made major news in the interview by saying or confirming for the first time he was conducting an impeachment inquiry.

But right after Nadler uttered that halting sentence to Burnett, he went back to saying the same stuff he’s been saying for ages.

“We are investigating all the evidence. We’re gathering the evidence. And we will at the conclusion of this, hopefully, by the end of the year, vote to — vote articles of impeachment to the House floor, or we won’t,” Nadler said. That’s a decision that we’ll have to make. But that’s exactly the process we’re in right now.”

I have some sympathy for Nadler here. He’s right that this is a semantic question. If he did come out and did utter the magical phrase “impeachment inquiry” — or hold a vote in his committee to officially open an inquiry — nothing substantive would change.

Still, it’s at least somewhat noteworthy that he has so far refused to end the ambiguity by doing either of these things.

And the “should Democrats start an impeachment inquiry” question has essentially been a stand-in for the true question splitting the party: whether Democrats should move full steam ahead with impeaching Trump in the House.

Two weeks after Nadler’s CNN appearances, the Washington Post’s Amber Phillips reports that, per House Democratic aides “close to the process,” it’s not clear whether Nadler’s recent statements signaled any substantive escalation, compared to what his committee has previously been doing.

Currently, members of the House are out of Washington until September. After that, Nadler is hoping for favorable court rulings on getting Mueller’s grand jury material and compelling testimony from recalcitrant witnesses. He’s also said he’ll have hearings with other witnesses in September and October. And his timeline for an ultimate decision on impeachment articles is “by the end of the year.”

But no Democrats are against a continued investigation by Nadler of potential crimes by Trump. The real controversy is whether to put impeachment at the top of the House’s agenda and begin a political battle that would dominate headlines for the foreseeable future. And it’s still a debate that is clearly unresolved.