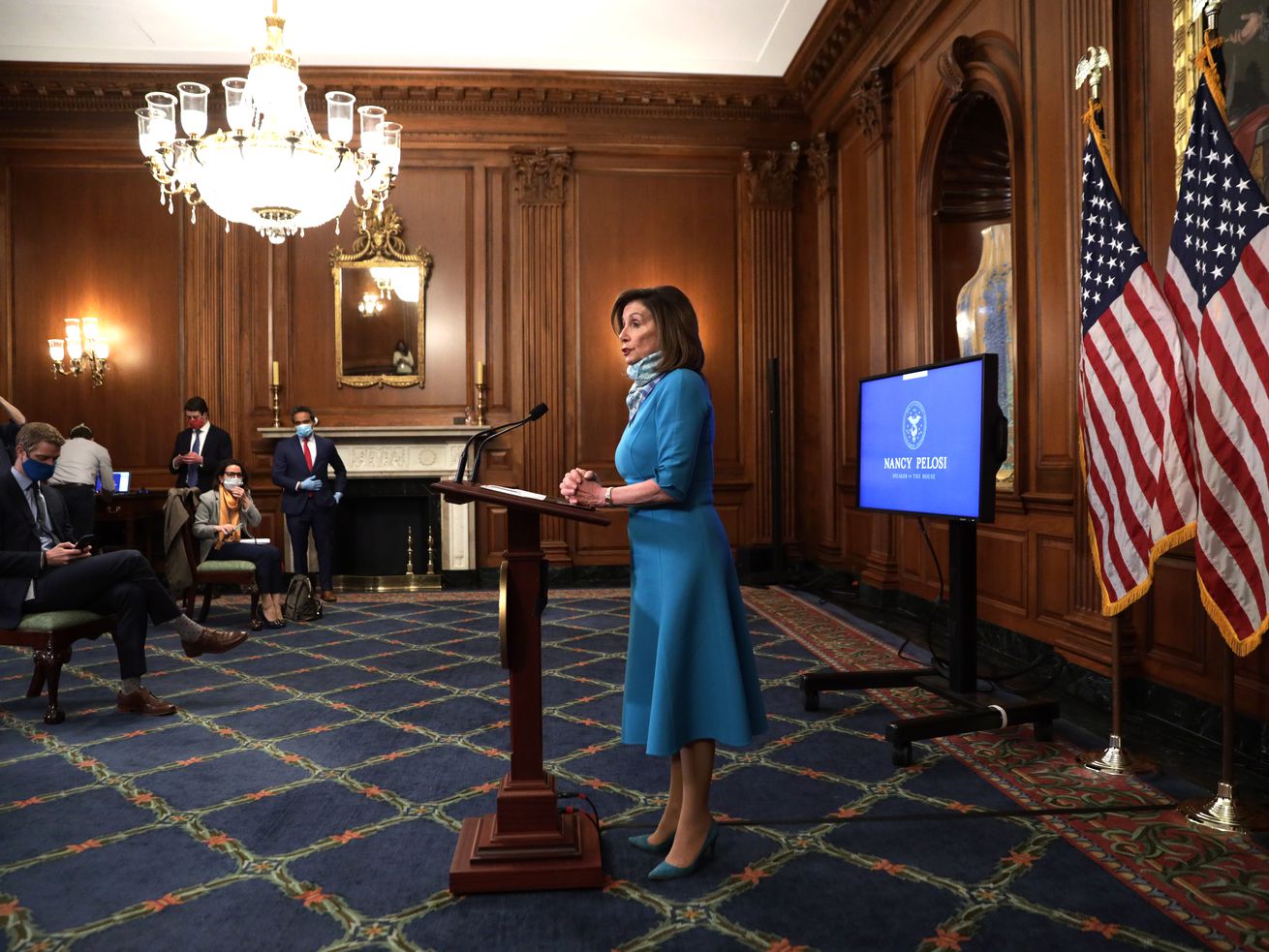 House Speaker Nancy Pelosi (D-CA) briefs members of the press at the US Capitol on May 7, 2020, in Washington, DC. | Alex Wong/Getty Images

Democrats are eyeing another ambitious stimulus bill with more direct payments and state funding. They still need to negotiate with Republicans.

House Democrats have released a more than $3 trillion opening bid for the next coronavirus stimulus package, a bill designed to bolster state governments, increase widespread testing, extend unemployment insurance, and expand vote-by-mail ahead of the November election.

The latest tranche of funding that House Democrats want, which they’re calling the HEROES Act, is targeted at states and municipalities whose budgets are depleted due to their coronavirus response. Many states have been hit hard with sudden spending needed to curb the virus, followed by a drain on sources of revenue from lost sales and income taxes.

The House is scheduled to return to Washington and vote on the bill on Friday, House Majority Leader Steny Hoyer said Tuesday.

House Speaker Nancy Pelosi hasn’t minced words that she thinks the US needs far more coronavirus testing and contact tracing capacity than it currently has, and the bill more funding for that. Democrats have also put in money for more direct payments to Americans, and funding to extend expanded unemployment insurance through January 2021. Expanded unemployment benefits are currently scheduled to run out at the end of July.

Pelosi has been fielding ideas from her Democratic caucus for the past few weeks. In a recent letter to her caucus, Pelosi specifically cited Federal Reserve Chair Jerome Powell’s mantra to “think big” — a not-so-subtle message to obstinate Republicans that they shouldn’t be concerned with the national debt in a time of extraordinary financial crises and low interest rates.

But while this bill is Democrats’ opening salvo, it’s nowhere near a final, bipartisan product negotiated with Republicans. Some congressional Republicans have said they don’t want to spend more money and add to the national deficit without making spending cuts elsewhere.

In a letter to Democratic members of Congress over the weekend, Pelosi echoed the “think big” message for the next bill. In other words, get a big list of Democratic priorities passed in the House first; negotiate later.

“We have to start someplace, and rather than starting in a way that does not meet the needs of the American people, we want to set a standard,” Pelosi said May 7 at her weekly press briefing. “And, again, we need a presidential signature, so at some point we’ll have to come to agreement.”

What’s in the House bill

Congress has already passed close to $3 trillion in the past couple of months as part of its coronavirus relief efforts. This latest House package will weigh in at over $3 trillion, a Democratic aide told Vox.

While far from a final bipartisan bill negotiated with the Senate, it’s a recognition that there’s no immediate end in sight for Covid-19, or the havoc it’s wreaking on the American economy. Here’s what we know about the big pieces in the House bill so far:

Per their state constitutions, most states have to balance their budgets and don’t have the ability to borrow unlimited sums of money like the federal government. With small businesses closing and millions of people getting laid off, once-dependable income streams like sales and income taxes will take a hit, and public workers like police, emergency workers and teachers stand to lose their jobs.

Additional stimulus checks: There’s a consensus building among Democrats that the one-time $1,200 economic stimulus checks to Americans weren’t enough to meet the scale of the current economic crisis. Democrats are proposing another round of $1,200 payments to go out, but with some changes. The payments would still be $1,200 for single filers and $2,400 for joint filers, but filers would also be eligible for $1,200 per dependent (this would be capped at three dependents).

On a Tuesday call with reporters, Hoyer said additional stimulus checks — along with state and local money — would be Democrats’ “red lines” that they won’t consider cutting from the next package, even if Republicans push for changes.

More funding for testing and coronavirus tracing: The US still lags other countries in per capita testing. The country currently averages about 264,000 tests a day, and White House officials say they expect that to double. Even so, that would be nowhere near the 900,000 daily tests that public health experts at Harvard’s Global Health Institute say the US should be conducting now. Getting testing and contact tracing up to speed will take additional federal funding, and Pelosi has made it clear this will be a significant priority for Democrats in their bill.

An extension of expanded unemployment insurance: The CARES Act expanded unemployment insurance by $600 per week until the end of July and made more people, including freelancers and the self-employed, eligible for it. But with the unemployment rate at a staggering 14.7 percent, there’s a recognition that many people will need assistance beyond July. The House bill would extend expanded benefits through January 31, 2021, and put in a so-called “soft cutoff” to ensure some individuals could get benefits through March 2021. Many states need additional money to help cover their portion of unemployment benefits, with many states’ coffers depleted due to the high demand, and the bill allocates $925 million to states to assist with processing claims.

More money for small businesses: Lawmakers are closely monitoring both the Paycheck Protection Program and the Economic Injury Disaster Loan Program, two efforts designed to provide small businesses with loans and grants to help cover financial shortfalls. While demand for the PPP has slowed some, potentially because of the additional debt businesses could take on from the loans, the EIDL is pretty overwhelmed with applications, according to a report in the Washington Post. Underrepresented small-business owners have so far been less likely to obtain funding from the programs, and multiple lawmakers have proposed bills that would funnel more money to those specific entities. Democrats’ bill includes $10 billion for additional grants for small businesses.

Support for SNAP benefits: Earlier this year, lawmakers approved provisions in the Families First Coronavirus Response Act that enabled families and individuals to receive the maximum monthly SNAP benefits for which they qualify. They haven’t, however, expanded what the maximum amount is, a move that could have serious implications for the poorest families, which haven’t seen any increase in the support they are receiving. Democrats have been focused on a 15 percent expansion to the maximum available benefit, similar to the increase that was implemented by the American Recovery and Reinvestment Act of 2009 — which was found to have had a significant impact in reducing food insecurity among lower-income households. Their latest proposal includes $10 billion to cover increased demand for SNAP.

Money for elections and vote-by-mail: With a major presidential election just six months away, many states are trying to figure out how to safely hold elections without exposing voters to coronavirus. Democrats in Congress want to put money toward expanding vote-by-mail access and extending the period for early voting, and the bill allocates $3.6 billion towards those efforts. Rather than mandatory vote-by-mail, this money would help states with the costs of expanding vote-by-mail or no-excuse absentee voting, or increase funding for personal protective equipment for poll workers in states that keep in-person voting.

Funding for the US Postal Service: The bill contains $25 billion in funding for the US Postal Service. Coronavirus has exacerbated longstanding problems at the USPS, which is saddled with debt in part because of the modern ways Americans communicate. The agency doesn’t typically rely on taxpayer money, but Democrats and some Republicans have been looking at a way to bolster the postal service, which is incredibly popular with the American public. But the White House has resisted past efforts to prop up the program with federal funding.

Where negotiations stand with the Senate and White House

The Republican-controlled Senate could prove to be a major roadblock on this bill, though the legislation helps serve as an important marker of where the Democratic-controlled House stands. By putting out their opening bid now, House lawmakers are going on the offensive in a way they didn’t with the most recent “interim” spending legislation, when Republicans sought to take the lead on small-business funding.

Thus far, Senate Majority Leader Mitch McConnell has begrudgingly conceded that the stimulus will likely include additional funding for states and cities, though he’s repeatedly raised concerns about how more ambitious legislation could increase the national debt. “We’ve added $2.8 trillion to the national debt over the last six weeks. We can’t keep throwing endless amounts of borrowed money at the problem in hope to fix it,” McConnell said during a May 7 appearance on The Daily Briefing with Dana Perino.

Shortly after House Democrats released their bill, McConnell spokesperson David Popp called it a “lib wish list on steroids” in a tweet, confirming the Senate GOP has no plans to take up the bill in its current form.

But Senate / House GOP happy to pass judgement on its contents (lib wish list on steroids), the wisdom of doing it (A+ for political posturing), and many other things (LOL). https://t.co/PuX4pP1rhO

Many economic experts, meanwhile, note that the stimulus that’s needed will have to match the singular magnitude — and nature — of the crisis. Additionally, they emphasize that current interest rates, which are lower than they were when congressional Republicans imposed their tax cuts in 2018, reduce the cost of borrowing.

“We want massive, debt-financed disaster relief while the economy is in its medically induced coma,” economist Paul Krugman said on Twitter in March.

Instead, McConnell has focused on prioritizing liability protections for businesses, which may face an influx of lawsuits from workers and customers in the wake of the pandemic.

The White House, too, has its own slate of priorities. Since the start of the outbreak, President Donald Trump has expressed interest in implementing a payroll tax cut, a measure that was used after the 2008 economic downturn and one that’s prompted pushback from Democrats and Republicans alike this time around.

At this point, the competing priorities suggest that a final proposal could look quite different from what Democrats are raising this week. Given the scale of the economic fallout six months ahead of the 2020 election, however, Republicans may well be pressured to reconsider their opposition toward additional stimulus.