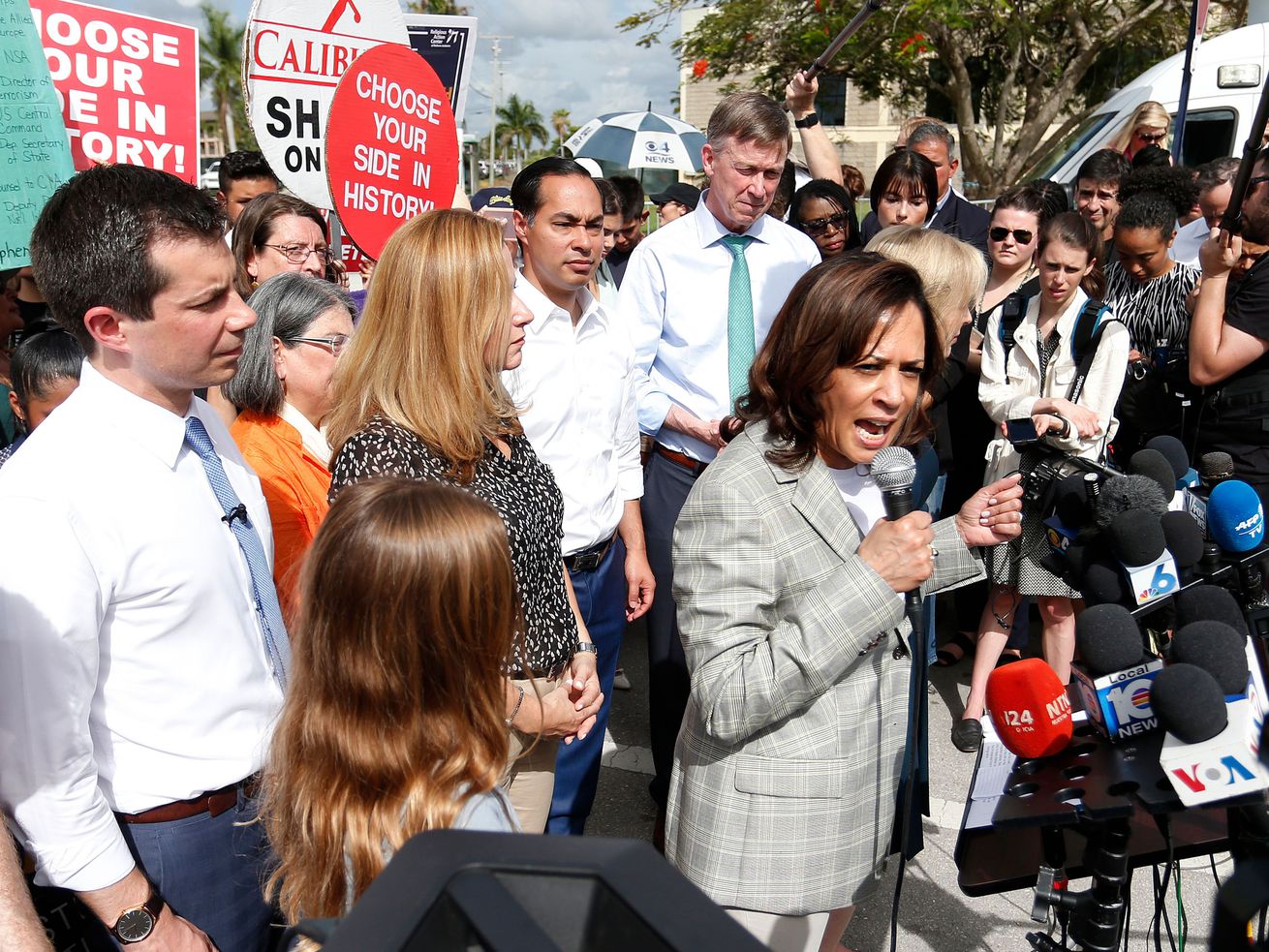 Democratic candidates visited the for-profit Homestead facility in Florida as they prepared for last week’s debates.

Activists demonstrating outside of a detention facility meant to serve as temporary quarters for migrant teens were joined by Democratic presidential candidates this week as conditions at the center and others like it have come under increased scrutiny following reports of a lack of basic sanitation at a Texas facility.

The candidates visited Homestead, a youth detention facility run by the private for-profit company Caliburn International on behalf of the federal government, while in Miami for the first Democratic primary debates. Many of the candidates, including Sens. Kamala Harris and Kirsten Gillibrand, South Bend, Indiana Mayor Pete Buttigieg, former HUD Secretary Julián Castro, author Marianne Williamson, and former governor of Colorado John Hickenlooper visited as part of a group organized by Rep. Debbie Mucarsel-Powell, who represents the Miami-Dade district where the Homestead shelter is located.

“Immigration reform should be a top issue in this presidential election,” Mucarsel-Powell said. “Every 2020 presidential candidate ought to visit the Homestead Detention Center and join us in denouncing Trump’s cruel immigration policies. We need these children in safe homes and facilities and close this detention center down.”

None of the candidates were allowed in. Doctors and other professionals who have been inside have described the conditions as being harsh; recent reporting has found children are being held at the facility for extended periods of time, far longer than the few days the average child is supposed to spend there. As Vox’s Catherine Kim reported:

While Caliburn insists that it only runs “temporary emergency shelters,” critics are questioning how “temporary” applies when children are being held for weeks. According to a report from the New York Times, 1,162 out of about 2,300 children had been held at the center for at least 20 days. The longest held child was a Guatemalan boy, who had been held there for more than 122 days, or four months.

The report is even bleaker when it comes to facility conditions: Children at the shelter complain about loud noises and a lack of privacy, and although most shelters often take the children for trips outside the perimeters for a change of scenery, most children at Homestead do not get to leave the facility unless they are heading to a medical appointment. While government-run shelter must follow strict standards — such as releasing a child after 20 days or having a strict vetting process for staff — Homestead does not have to abide by such rules because it is privately owned.

Sen. Elizabeth Warren, who visited the site Wednesday ahead of the main delegation, climbed one of the ladders activists have set up at the facility’s perimeter in order to look over its fence and interact with children in the facility’s yard. She described seeing a “harsh, packed-down field” surrounded by temporary shelters in the South Florida heat, and called Homestead’s existence “a stain on our country.”

She has has called for investigation into Caliburn, and for an inquiry into how President Trump’s former chief of staff, John Kelly, came to be on its board after Caliburn won a $341 million no-bid contract to run the facility.

Many of the other candidates called for the facility to be shuttered; Harris pledged to shut down private detention facilities if elected, and Buttigieg lamented taxpayer dollars being used to fund Homestead. The Homestead facility costs US taxpayers $1 billion a year to run, which breaks down to roughly $750 per child per day.

“What is being done in that building is being done in our name and with our money and it is wrong,” the mayor said. “But if it is our tax money, our country, then it is our obligation to bring about something different and that is what we are here to do. We will say no more to prisons for children.”

Gillibrand, who has made family and childhood advocacy as well as women’s rights a key part of her platform, highlighted allegations of sexual misconduct at the facility, saying “We have heard about sexual assault allegations here in this facility by staff. By staff!”

And Castro, while looking into Homestead from a ladder, shouted a message to the children in Spanish. “Estámos aquí para ustedes, no están solos,” he said, which means, “We’re here for you, you’re not alone.”

The Homestead visits come following reports of poor conditions at another detention facility in Clint, Texas. There, children were reportedly left to care for one another unsupervised, and were denied access to basic sanitation items like soap and toothbrushes.

Public outcry and the Trump administration’s insistence that it was Congress’ responsibility to provide the funding for these essentials led to bills being prepared in the House and Senate last week that would give the administration supplemental border funding for humanitarian aid and for operational costs (like buying mattresses and beds).

Democrats in the House included care and health guidelines for detained children in their bill; these standards were absent from the Senate bill, which had bipartisan support in the Senate, and which was ultimately passed by the House over the concerns of progressives. The bill provides $4.59 billion in funding and currently awaits President Trump’s signature.