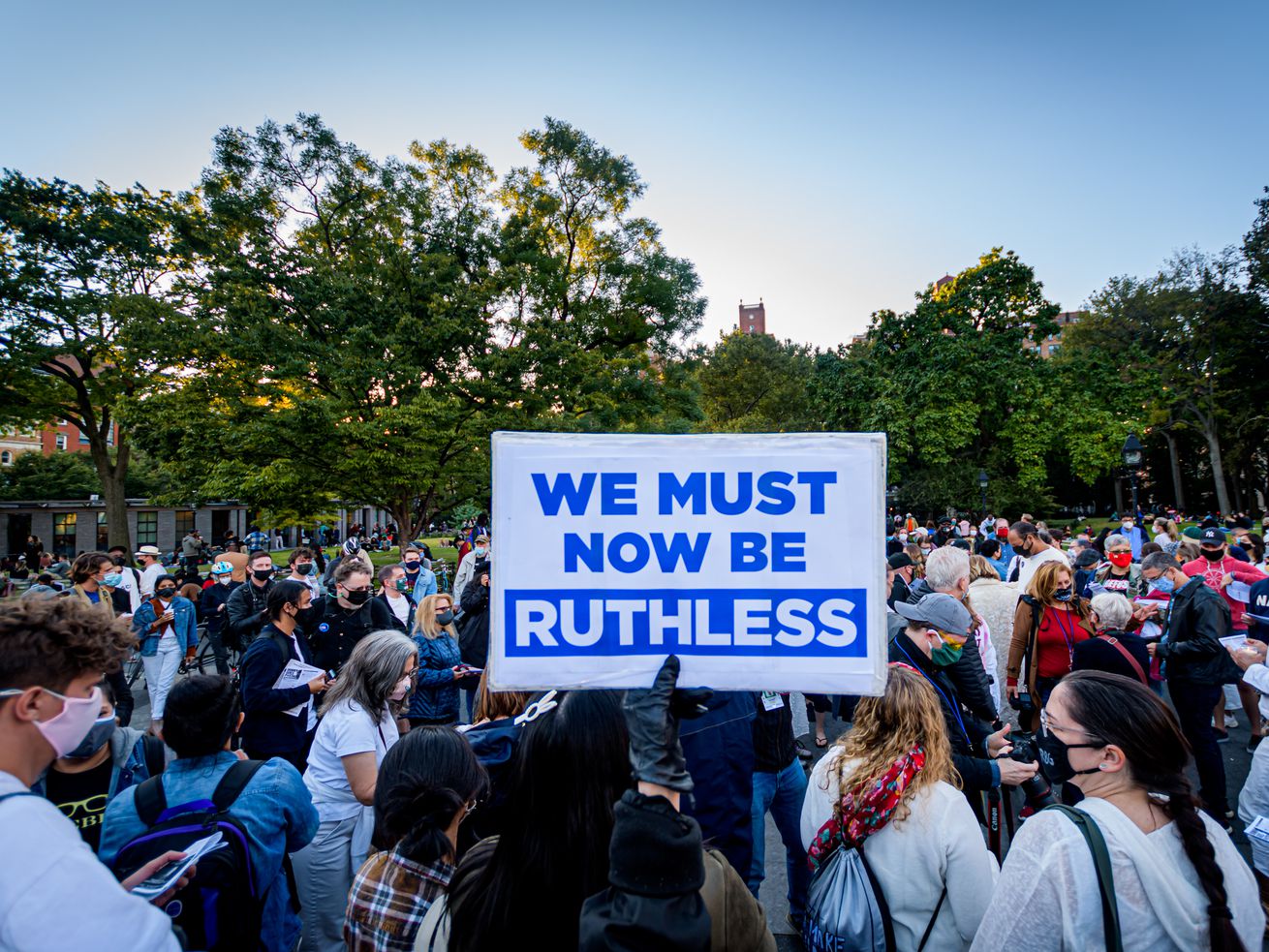 A crowd on New Yorkers gathers at Washington Square Park for a candlelight vigil and memorial to mourn the loss of Supreme Court Justice Ruth Bader Ginsburg. | Erik McGregor/LightRocket via Getty Images

David French is a senior editor at the Dispatch, a columnist at Time, and one of the conservative commentators I read most closely. French and I have rather different politics — he’s a Christian conservative from Tennessee, and I’m a secular liberal from California — but his upcoming book, Divided We Fall: America’s Secession Threat and How to Restore Our Nation, tracks some of the same problems I’ve been obsessing over for years: political polarization and the way it’s cracking America apart.

But French goes further than I do: He fears not just governmental dysfunction and paralysis, but full-on secession and even civil war. He constructs two in-depth scenarios — one quite violent — by which America fractures into separate red and blue nations following secession, and argues the only viable solution is a supercharged form of federalism in which both sides accept that in a nation this polarized, America can only hang together if it permits different regions to govern apart. But is that an answer to our problems, or simply a form of submission to them?

In important ways, French’s solution is the opposite of the path I tend to favor, and the result is a constructive debate about the nature of group polarization, the possibility of secession, the importance of the filibuster, what we can learn from James Madison, the virtues and vices of democracy, and the feedback loops of governance. There are, of course, no perfect answers here. But perhaps we can discover the least terrible solution on offer.

(One note: This conversation was recorded shortly before Ruth Bader Ginsburg’s death. But as you’ll hear, much of what we talk about is unnervingly relevant to the kind of political crisis, and particularly the questions of minoritarian versus majoritarian rule, that we’re now facing.)

An excerpt from our conversation follows. The full conversation — which goes much deeper into our various solutions for this problem — can be heard on The Ezra Klein Show.

Subscribe to The Ezra Klein Show wherever you listen to podcasts, including Apple Podcasts, Google Podcasts, Spotify, and Stitcher.

You open the book with this really ominous line, “It’s time for Americans to wake up to a fundamental reality: the continued unity of the United States of America cannot be guaranteed.” Why not?

The reason I say that is because, as you’ve written a lot about, we are not just drifting apart as a people — in many ways, we’re sprinting apart. And my simple proposition is you can’t do that indefinitely: you cannot continue to move apart indefinitely and stay together as a country. There’s not some sort of magic elixir that keeps America united. There has to be some sort of fundamental hared tolerance, some sort of shared regard for each other, some sort of shared sense of what this country is and should be.

You go in this book somewhere I didn’t go in my book: to the question of secession. And you believe that we are beginning to experience the conditions that would make secession from either a group of blue states or group of red states plausible. Why I should see secession as a real threat or possibility?

One was this notion that you have a geographically contiguous area that has a shared, independent culture that it views as being under threat. With the Confederacy, what they viewed as under threat was the continued viability of slavery. But what was needed to really set the spark was not just a sense of our culture is under threat but our lives are under threat.

So prior to the American Revolution, you had the British regulars quartering in people’s homes in Boston and marching out to raid the surrounding countryside. And there’s this really powerful part of Battle Cry of Freedom, the phenomenal single-volume history of the Civil War, that talks about how the South had whipped itself into a frenzy believing that it was in imminent danger and that abolitionists were trying to foment a genocidal kind of slave rebellion.

So you had this sense of shared geography, shared culture, and a sense of mortal threat that together made the unthinkable thinkable. And my central proposition is there are many regions where you have the shared geography and the shared culture, but we don’t yet have the sense of mortal threat or the total loss of confidence in democracy. But you can [see it] emerging. That’s why I wrote the book: in part to say we just can’t assume everything’s going to be okay and continue to behave as we’re behaving when the way we’re behaving is making the unthinkable eventually thinkable.

I was struck by what kinds of secession scenarios you felt were plausible. They revolved around political violence and policies that are driven first by an effort to address violence. But when I worry about where we could go, I see something much more directly nearby, which is a legitimacy crisis.

I see an election coming that has the possibility to end in a scenario where one side will not accept the legitimacy of the outcome and there’s not really going to be a way to resolve that. We don’t really have a way to resolve it now. We do if both parties act responsibly, but I have not found that the Republican Party has been all that responsible around reining in what their base wants recently.

So my version of this is: What if we have an election where it looks on election night like Donald Trump won? Then the mail-in ballots slowly begin overturning that. But there’s an effort to disqualify a bunch of them. And then, soon enough, you have a situation where the two sides think they won and the other side disagrees.

Yeah, if I had been writing the book starting in July or August of this year and was rushing it to print, my scenario would be a little bit different. Now, I don’t think that we are at the conditions where something like what I’m warning about in the book is imminent. So I think that even in the worst-case scenario of the current election, we would have potentially a constitutional crisis, but I’m not sure that we would have a constitutional crisis that severe. I don’t think that all of the conditions have moved to such a state that we could break apart in 2020.

But I agree with you completely. Let’s take a scenario where we have this incredible polarization around mail-in ballots and you have Trump leading after Election Day on the counted ballots from people who voted in person. Then, as the mail-in vote is coming in, you’re noticing that an unacceptably high percentage of these mail-in ballots are being disqualified. We’re already seeing disturbing levels of disqualification in North Carolina, a swing state. You’re then creating a situation where there’s a very real fear that we may not ever know who was supposed to have won the state, and the people we trust the least in life are declaring the victor.

And then let’s say the Supreme Court ratifies the result. He’s sworn in and he begins to behave in a punitive way toward some of his political opponents or in getting engaged in an increasing number of executive actions that are not even. There’s no even attempt to pass things through Congress. There would be enormous pressure on blue-state governors to reject the authority of that administration, which would then create more pressures.

I want to talk about the 1960s because the point I make in my book is that a space of optimism for me is that in the ’60s, we had more political violence. We had more fundamental issues that were being fought over all at once. We also had more war. We had a draft. There’s a lot happening.

And my fear is that we had a political system better able to find consensus then than we do now. So if you begin to have something more like the ’60s now, you can have a real crisis. I’d say in many ways, we have begun to have that — this has begun to feel more like ’68 than it did a couple of years ago.

But you’ve a really interesting discussion in the book about why what happened in the ’60s didn’t lead to fracture. Can you talk through that?

The short answer is that in the 1960s, you didn’t have the same kind of red and blue dynamic that you have today. Violence was scattered around the country. It was definitely more serious than it is now, but it was scattered. And you had the political conditions that existed for a strong majoritarian rejection of that violence.

There’s a couple of things today that are quite different. One is this incredibly polarized geographic and political separation that we have where we don’t have that ability to engage in that huge majoritarian rejection. And, at the same time, we have a social media environment and news environment that amplifies every single violent incident that occurs.

There might have been a mail bomb in Des Moines in 1968, and if you’re growing up in Kentucky, you would never hear of it. Now, if you’re politically active and somebody knocks a MAGA hat off a kid’s head at a Des Moines Burger King, you immediately know about it in Kentucky and are talking about how horrible and intolerant they are.

The Splendid and the Vile by Erik Larson