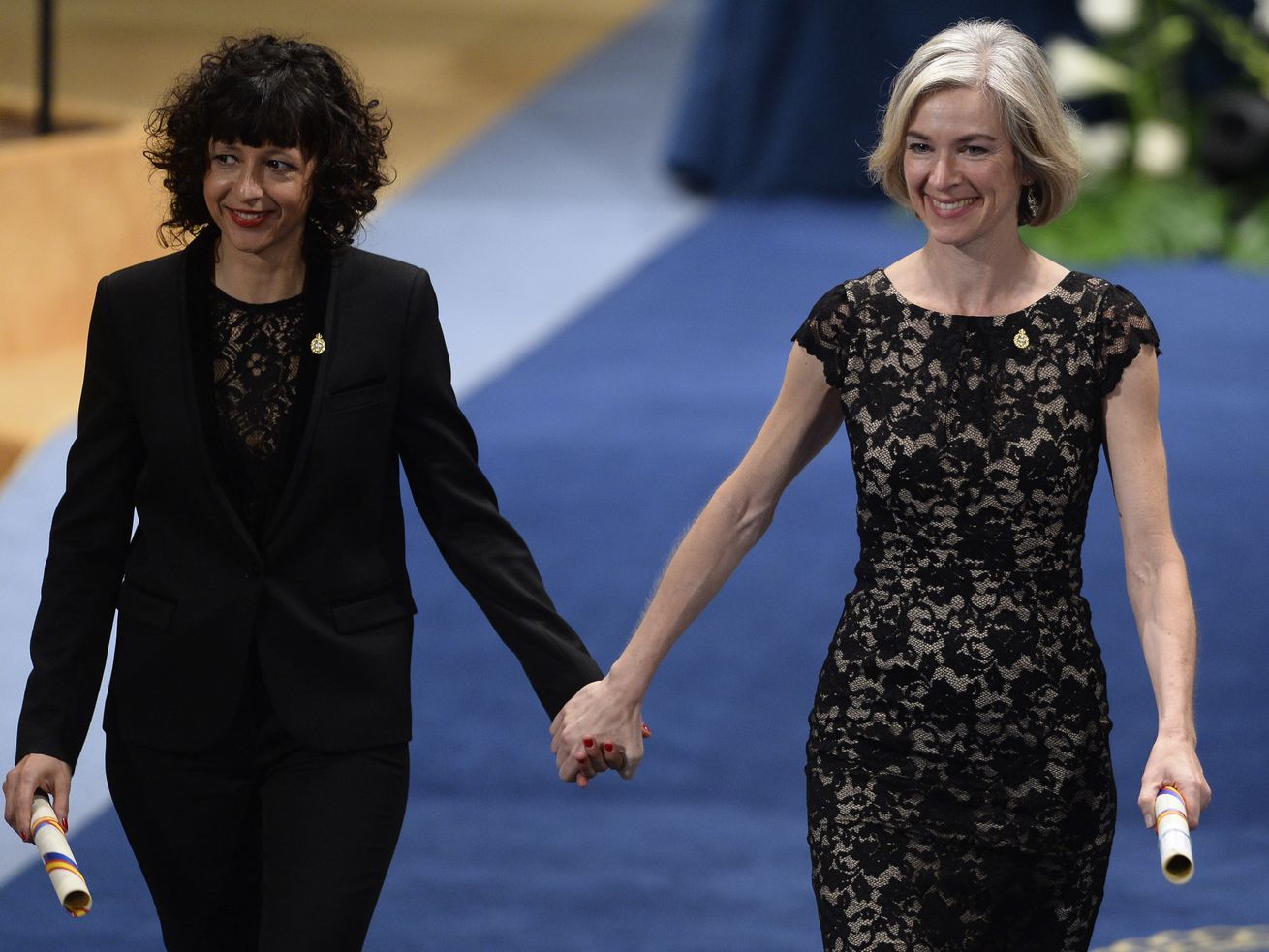 Emmanuelle Charpentier and Jennifer Doudna will split the 2020 Nobel Prize in chemistry.

Mushrooms that don’t brown. A treatment for sickle-cell anemia. Driving malaria-carrying mosquitoes to extinction. Resurrecting the woolly mammoth. Editing genes in human embryos to make them less susceptible to HIV. These are just a handful of the possibilities of the versatile gene editing tool known as CRISPR that scientists have explored in the few years since its discovery.

On Wednesday, the 2020 Nobel Prize in chemistry was awarded to the pair of scientists who discovered the CRISPR gene-editing mechanism, also known as CRISPR/Cas9. It acts as a pair of “genetic scissors” to precisely make cuts and insertions in genomes, creating the possibilities of treating genetic maladies, as well as introducing new heritable traits into living organisms.

Emmanuelle Charpentier, director of the Max Planck Unit for the Science of Pathogens in Berlin, Germany, and Jennifer Doudna, a professor at the University of California, Berkeley, will split the $1.1 million prize evenly, marking the first time women scientists have been awarded the chemistry Nobel without a male collaborator.

“This year’s prize is about rewriting the code of life,” Göran K. Hansson, Secretary General of the Royal Swedish Academy of Sciences said on Wednesday.

It’s hard to overstate the impact of Charpentier and Doudna’s discovery. In 2011, there were fewer than 100 published papers on CRISPR. In 2020, there were more than 35,000. Dozens of companies have sprung up to develop products from this technique, from therapies for genetic diseases to engineered crops. Scientists have even developed a CRISPR-based test to detect SARS-CoV-2, the virus that causes Covid-19.

All this from an ancient defense mechanism found in common bacteria.

The CRISPR/Cas9 technique has managed to simultaneously improve the precision and speed of genome editing, while also lowering the cost of this manipulation. Despite all the progress to date, there may be many more discoveries built on this foundation that lie ahead.

With the Covid-19 pandemic raging around the world, Charpentier and Doudna will not be able to accept their prizes in person this year and will instead participate in a digital ceremony in December. “I can guarantee you that Doctors Charpentier and Doudna will receive their awards before the end of the year, and that they will be our guests of honor next time we can celebrate Nobel week with the traditional festivities here in Stockholm,” Hansson said.

How CRISPR sequences and the Cas9 enzyme work to edit genomes

The roots of the discovery date back to 1987, when Japanese researchers looking at E. coli found a strange section of DNA in the bacteria. There were short, repeating clusters of the DNA sequence that could be read in the same way forward and backward, forming palindromes.

They named these sequences Clustered Regularly Interspaced Short Palindromic Repeats, or CRISPR, but the scientists at the time didn’t what purpose they served.

Then in 2007, researchers studying the Streptococcus bacteria used to make yogurt discovered these sequences are part of how bacteria resist infections from viruses.

When a bacterium fights off a virus, it keeps a small section of the virus’ genetic material as a souvenir, storing the information from the fragment in the spaces between CRISPR segments in its own genome.

If a similar virus attacks again, the bacteria produces an enzyme called Cas9. It uses the stored bits of viral genetic material in CRISPR spaces as sort of a mugshot. When it identifies a matching strand, it cuts it into pieces. This thwarts a virus from replicating.

In 2011, Charpentier and Doudna figured out that they could replace the template that Cas9 uses to snip genetic material with a synthetic code of their choosing. The enzyme then would search for a match to the new template and cut that out instead. This demonstrated that they could harness this mechanism to make cuts in a genome at any place they wanted.

The researchers published their findings in a 2012 paper in the journal Science.

While genetic-editing techniques have been around for decades, the CRISPR/Cas9 system introduced a new level of precision. It’s also fast and cheap, condensing genetic manipulation that previously took months and cost thousands of dollars into a system that can work in hours from a kit that you can buy online for less than $200 (“you don’t need anything else but water and a microwave,” it advertises).

The potentially lucrative applications of CRISPR/Cas9 have fueled an ongoing patent dispute between a team at the Broad Institute led by Feng Zhang and Doudna’s team at Berkeley. In 2013, Zhang, showed in a paper in Science that CRISPR/Cas9 could be used to edit the genomes of cultured mouse cells or human cells.

The growing use of such a sophisticated genetic manipulation tool has also proven controversial, especially as a small number of scientists have pushed forward with using it in human embryos despite an international consensus that it was too soon (outside of a serious medical need). In 2018, He Jiankui, a researcher in China, announced that he had already used CRISPR to edit the genomes of the embryos of a pair of twin girls, marking the first time human embryos have been genetically edited.

The story generated international outcry and calls for stricter regulations on using this kind of genetic manipulation. He was later sentenced to three years in prison by Chinese authorities for forging ethics review documents and misleading the doctors involved about the nature of his experiment.

In a 2018 statement responding to He’s announcement, Doudna called for constraints on how CRISPR is used in humans. “The work as described to date reinforces the urgent need to confine the use of gene editing in human embryos to cases where a clear unmet medical need exists, and where no other medical approach is a viable option, as recommended by the National Academy of Sciences,” she wrote.

The National Academy of Sciences in September put out a report assessing the state of genetic manipulation and concluded that such techniques are still not ready for use in humans.

“No attempt to establish a pregnancy with a human embryo that has undergone genome editing should proceed unless and until it has been clearly established that it is possible to efficiently and reliably make precise genomic changes without undesired changes in human embryos,” according to the report. “These criteria have not yet been met and further research and review would be necessary to meet them.”

Further reading about the 2020 Nobel Prizes: