WITH his shoulder-length blond-streaked mane and full beard, Kevin Parker looks every inch a throwback to the golden age of the hippie.

The laid-back Aussie wouldn’t look out of place jamming with The Grateful Dead or Jefferson Airplane.

This might explain why the mastermind behind Tame Impala (or should I say guru?) is happy to call his music “psychedelic rock”.

“If I’m in the back of an Uber and the driver asks me what I do, I say I’m a musician,” he explains.

“If they ask, ‘What kind of music?’, I say, ‘Psych-rock’ . . .  although that might just be me wanting to get the conversation over with!

“Since the dawn of music, it’s been a completely liquid, multi-dimensional thing of influences, styles, rhythms and origins. You can’t really define it in a couple of words.”

I’m speaking to 34-year-old Parker via Skype — him at his studio in Perth, Western Australia, and me overlooking the Thames on a drab London day in January. I know where I’d rather be.

He’s the first to admit he’s an obsessive muso — but he’s a very engaging one nonetheless, with a wildly creative mind.

The chief focus of our chat is the fourth Tame Impala album The Slow Rush — a blissful, life-affirming confirmation of one of the most vital and popular acts around.

Despite the “psych-rock” pigeonhole, which doesn’t express the thrilling genre-fluidity of Parker’s music, he has a growing reputation as the “rock” musician du jour in rap and R&B’s highest circles.

“It has surprised me how far this has gone,” says Parker.

“If I’m brutally honest, I always hoped hip-hop fans would be into Tame Impala.

“Without being fully conscious of it, I’ve been into hip-hop rhythms from the very beginning, even if it was simply a Portishead-style drumbeat back then.”

Though all his high-profile collaborations have made a big impression on this Australian with South African roots, Parker reckons the singular Lady Gaga stands out.

“It was great being in the same room as her,” he enthuses. “Not just to witness the conviction she has for what she’s doing but also to see how human she is.

“It was inspiring because I  realised you don’t need a superhuman level of confidence to still be confident in what you’re doing.”

Seeing a force of nature like Lady Gaga at work has been essential to Parker’s ability to deal with the pressures of fame and adulation.

When, years ago, he faced a live audience for the first time, he found the experience intimidating — but now he says: “I decided to be confident because I was wasting my time not being confident.

“I’ve seen people around me that have conviction and I realised conviction is so important in moving forward with music or art.

“Although it’s a strong word, I’m kind of repulsed by lack of  conviction.”

After sold-out gigs at New York’s cavernous Madison Square Garden and a headline slot at the States’ huge festival, Coachella, there’s another even more astonishing example of Parker’s success.

Addictive disco-inspired hit The Less I Know The Better, from 2015 album Currents, has clocked up  470million listens on Spotify — more than any song in Taylor Swift’s top five at the moment.

Though all his high-profile collaborations have made a big impression on this Australian with South African roots, Parker reckons Lady Gaga stands out[/caption]

“The idea of me making anything that’s experienced 400million times would be terrifying if it wasn’t music,” says Parker.

“I can’t imagine anything worse than getting up on stage in front of however many thousand people and just talking.”

For the uninitiated, it’s important to know that Parker is mostly a lone wolf in the studio, creating the myriad sounds of a band with guitars (and countless effect pedals), keyboards and electronic beats all by himself.

Only in the live arena does a band in the conventional sense emerge, with various touring members joining the fray.

‘IT’S BLINDINGLY OBVIOUS TO ME TO GO IT ALONE’

Oh, and the name Tame Impala, after the fleet-footed antelope, derives from Parker’s South African connections.

His dad came from Zimbabwe and his mum from South Africa itself, even if he was born in Sydney.

From a  young age, Kevin dreamed music “would take me where it has finally taken me.”

He says: “The moment I discovered music, it was an immediate takeover of my life.

“Since I was a kid, I’ve been a creative person. Nothing makes me feel the way I feel when I’m being creative and that was pre-music. It didn’t matter if I was drawing pictures of dinosaurs. But I consider music to be the only real thing that I’m good at.”

This brings us to Parker’s most recent studio endeavours — which resulted in The Slow Rush, a mesmerising opus dwelling on the passage of time, the nature of existence and mortality.

“But it’s not a concept album!” he is at pains to point out.

Of his solitary mission in Perth and Los Angeles, where he now has a base, he says: “It’s blindingly obvious for me to go it alone.

“If I was to do Tame Impala with a bunch of people in the room, there’s no way it would turn out the same.

“It might still be good but it wouldn’t scratch that itch for me.”

Parker likens his craft to painting — a suitable analogy given the vivid psychedelic hues he adds to his sonic creations.  “It’s like setting up an easel on the edge of a cliff and painting what you see,” he says. “At the end of it, you have a canvas that only you have done.”

Playing in a band is more a “social experience” to Parker: “All the times I did it growing up, it was an excuse for hanging out, getting drunk and stoned or whatever.  I didn’t feel as if the music or the songs were the point.

“With Tame Impala, it’s completely different, the opposite. The burden is on me, and the highs I reach in feeling I’m doing something great can only be reached when I’m on my own.”

So what motivated Parker to start work on The Slow Rush?  “For four years, I didn’t really want to make a Tame Impala album,” he says. “I was shutting out the emotional burden and mental load because the other things I was doing seemed much more effortless.

“With collaborating, I could be one cog in the machine and not feel the responsibility of making a whole album myself.

“But suddenly I had that feeling again. I wanted to paint a picture that didn’t have anyone else’s brush-strokes. It’s like migration — like when a flock of birds knows it’s time to go. It’s instinctive.”

With all that he’s achieving, I was imagining Parker had a fierce work ethic — but he puts me right.

“I guess I’ve gradually respected my completely disorganised brain. Being such a scatterbrain is probably one of the ingredients of my success.

“I’m beginning to understand that my terrible short-term memory is like a hidden force or ability. If I was more switched on, I wouldn’t have done what I’ve done musically.”

The new album is book-ended by intoxicating soundscapes One More Year and One More Hour, and there are others named Tomorrow’s Dust, Lost In Yesterday and It Might Be Time — big clues to the themes on his mind.

One of Parker’s ambitions was to capture a feeling of nostalgia, as well as providing glimpses of the future — for both him and humanity at a time when climate change and political uncertainty dominate our lives. He says he needed a paradoxical title, The Slow Rush, to describe his thought process.

“There’s this idea that time is rushing forward but standing still at the same time,” he says. “It’s not necessarily meant to be druggy but it reminds me a little of that.”

The album’s striking cover photo of an abandoned building reclaimed by the desert was taken in Namibia, the sparsely populated country north-east of South Africa.

MOST READ IN SHOWBIZ

“The house is in an abandoned diamond town,” Parker says.

“It’s crazy windy, so the sand is just blowing in the window and creating amazing patterns in the rooms. I love the way you can’t tell if the sand has come  through  momentarily or over decades.”

He had joined the photographer in Namibia, on what was Parker’s first visit to the region despite his parentage.

He was struck by the local accent, similar to that of his folks, and the trip helped him reconnect with his roots.

“I came up with the name Tame Impala because I’d heard about impalas so much,” he says. “Being in Africa, I had this incredible  feeling of coming full circle.” 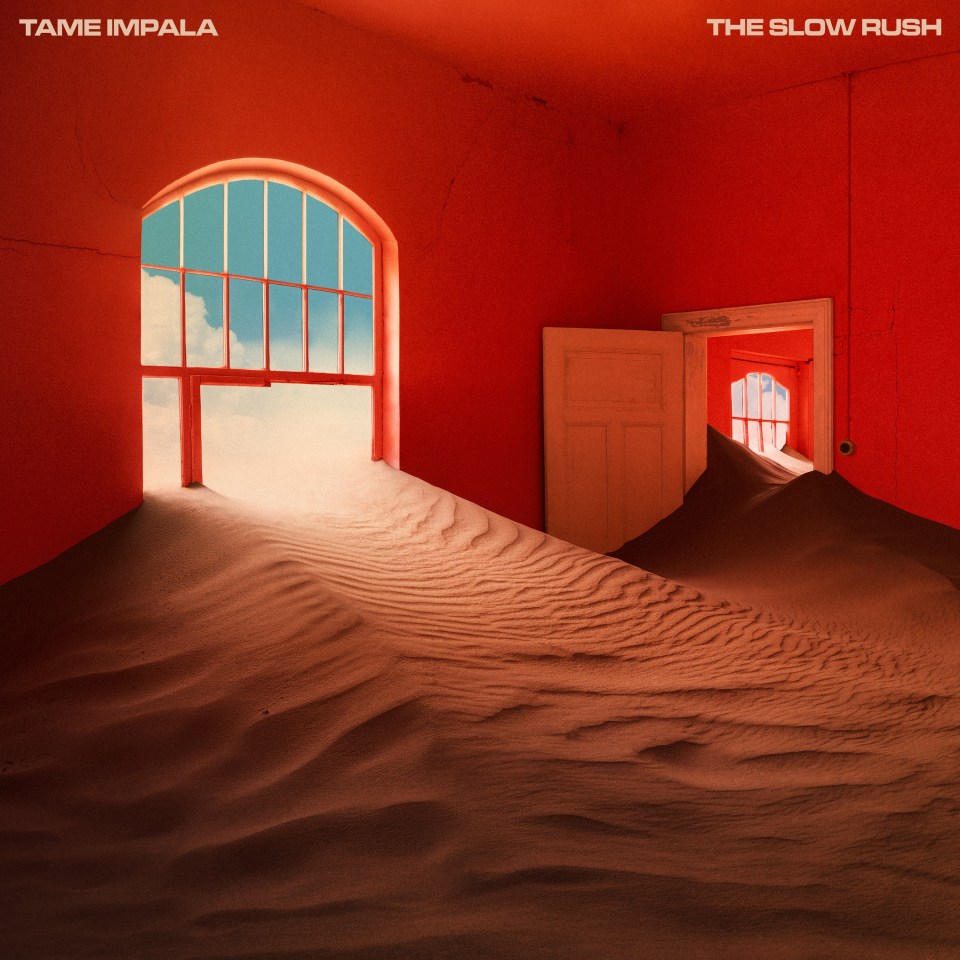