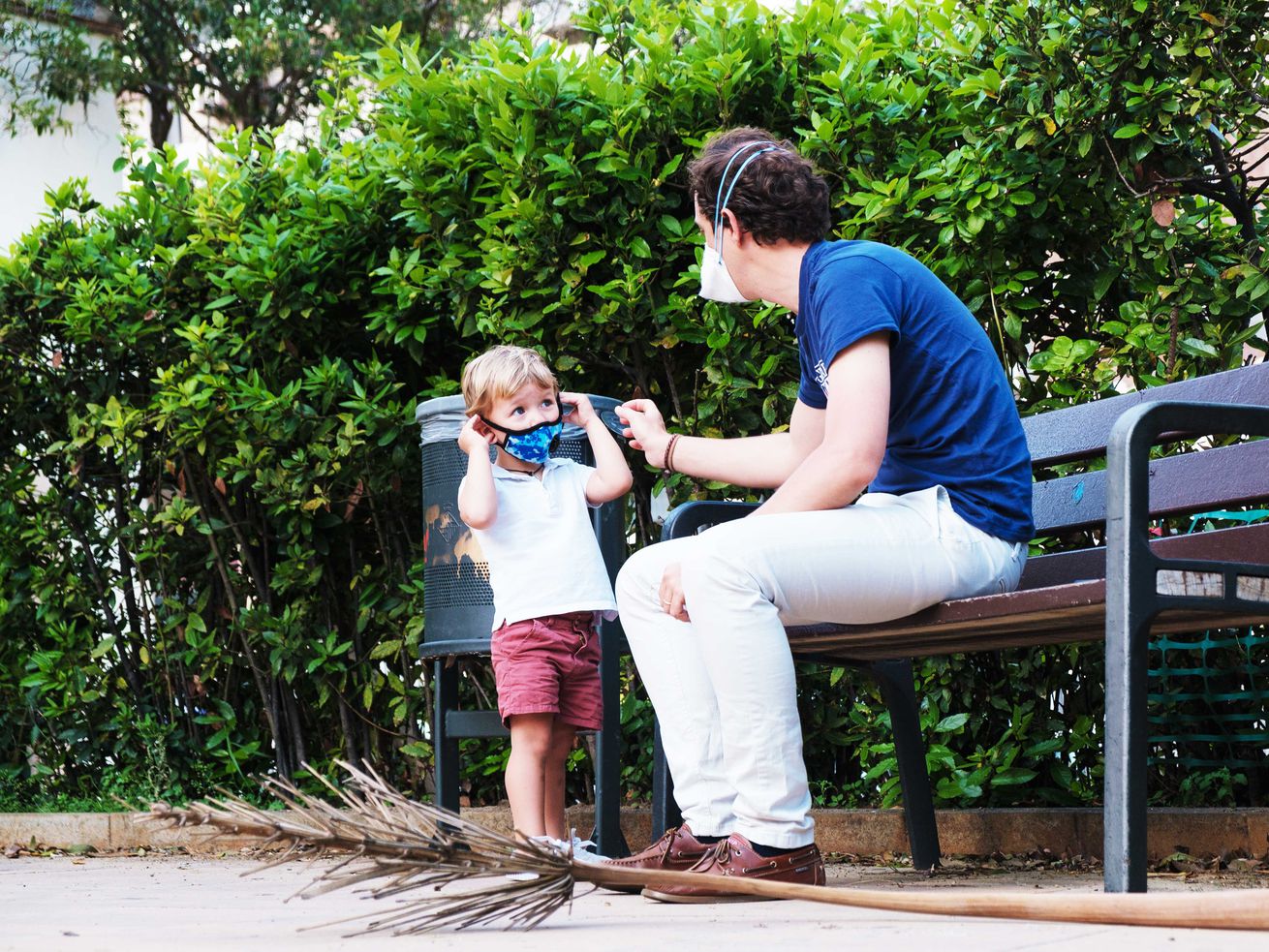 A child plays with his father outside in Barcelona, Spain, on May 1. Both are wearing face masks. | Pablo Miranzo/SOPA Images/LightRocket/Getty Images

The raging debate over how infectious children with the coronavirus are, explained.

As most of the world continues to socially distance because of the coronavirus, Switzerland’s infectious disease chief wants to loosen restrictions for children — so they can hug their grandparents.

It’s a poignant move, as it was made in part to benefit older people’s mental health. But it’s also very risky, as it’s unclear whether or not young children, who generally seem to get mild cases of Covid-19, transmit the disease to others at similar rates as adults.

As that scientific debate rages, Daniel Koch, the Swiss infectious disease chief, firmly planted his flag on one side of it Wednesday. “Young children are not infected and do not transmit the virus,” he told reporters, referring to a study released this month as well as his conversations with Swiss health experts.

The Swiss Federal Office of Public Health, where Koch works, says children under 10 years old rarely get the virus. “When they get sick, they often have only light symptoms,” spokesperson Yann Hulmann told me in an email. “They are apparently not big spreaders and are often infected by adults. So reopening schools does not seem to be a major problem.”

The risk of such a hug “is very low compared to the benefit for the mental health of the grandparents,” Hulmann added.

The views of Swiss officials didn’t come out of nowhere. They come amid a growing number of released reports from public health and infectious disease experts suggesting children spread the virus far less than adults. They form part of the justification for why Denmark reopened its schools earlier this month and why Spain this week allowed children 13 years old or younger to play outside.

But the science is far from settled. The US Centers for Disease Control and Prevention says kids “can still pass this virus onto others who may be at higher risk, including older adults and people who have serious underlying medical conditions.” And other studies show children continue to display similar transmission abilities as adults, leading experts to caution against trusting kids not to spread the disease.

“What we don’t know yet is the degree to which children can transmit the virus,” Dr. Danielle Zerr, an infectious disease expert at Seattle Children’s Hospital, told me.

This isn’t some trivial debate. World leaders face hard choices over which parts of society to reopen, when, and how quickly. Plus, staying home from school could curb children’s educational progress, while disrupting the work-life balance for adults. If children can head back to school with minimal health risks, then that could prove a major benefit for the child, their parents, and society at large.

But at the moment, the only thing that’s clear is that there’s no real clarity on this issue. Still, it’s worth looking into the science for each case, and what the data does and doesn’t say about coronavirus transmissibility from young children.

The evidence for why kids rarely transmit the coronavirus

It’s not entirely clear why, but so far, children don’t seem to be getting Covid-19 as often as adults. As Business Insider pointed out on Thursday:

According to the US Centers for Disease Control and Prevention, 1.7% of 150,000 American COVID-19 cases affected people under the age of 18. Globally the amount of children with COVID-19 is under 2% of all cases, from Korea to Spain to Italy.

And there is a growing body of scientific literature showing young children may not be as likely to spread the virus to others as older people.

Take this April 22 study from the government of New South Wales, the Australian state that contains one-third of the country’s population and the city of Sydney. Researchers looked at five primary schools, with kindergarten through seventh grade (in US terms), from March to mid-April of this year. Schools prove a valuable testing case, not only because there are many children to observe, but also because they allow experts to gauge when the right time to restart normal schooling might be.

As the chart below shows, they found that only one person out of 168 in close contact with an infected person got sick with the virus.

Which led to the following conclusion: Covid-19 “transmission in children in schools appears considerably less than seen for other respiratory viruses, such as influenza.”

Top Australian officials, including Chief Medical Officer Brendan Murphy, are now citing this report to say social distancing measures don’t need to be followed in schools as the country considers reopening them fully in the near future.

But Dr. Kristine Macartney, the study’s lead author, pushed back on such conclusions. “We did see low transmission, we didn’t see no transmission,” she told me. “I think children can still transmit coronavirus. That’s certainly the case. We’ve seen that.”

Macartney also noted the study is still a preliminary finding — it will go through the peer review process soon — and that more research is required. Her team “didn’t actually evaluate” whether the observed schools followed social distancing guidelines or not, and class attendance dropped considerably in April, meaning new cases of community spread among her study’s population could have emerged after its conclusion. “I don’t think our findings should be used as a single piece of evidence in anybody’s policy,” she said.

What she does emphasize is: “It’s not that transmission can’t happen, it’s just that evidence is suggesting … that [transmission among children] happens at a lower rate than does transmission between adults.”

Other evidence for that claim includes a March non-peer-reviewed study from experts in China and Australia. Between December 2019 and March 2020, researchers looked at 31 households with coronavirus infections in China, South Korea, Singapore, Japan, and Iran.

What they found was someone 18 years or younger brought the disease into the home in just under 10 percent of cases. That’s remarkable, since previous studies had shown children were responsible for infecting their families with H5N1 bird flu in about 50 percent of cases.

The preliminary evidence for the claim that children don’t transmit the coronavirus at high rates also led the European Center for Disease Control and Prevention (ECDC) to be optimistic about kids and transmission on their website: “Data from population-based and cross-sectional studies indicate that children are unlikely to be primary source cases.”

However, when I followed up with the ECDC, spokesperson Alexandru Niculae told me in an email these and other studies “cannot be considered as ‘enough evidence’, this is still considered limited data; so we need to take this with a pinch of salt for the time being.”

Despite all those studies, multiple experts told me it’s still completely possible that kids could be significant spreaders of the disease. Seattle Children’s Zerr is one of them. “If we document high levels of virus in their nose, I don’t know why they would be less likely to transmit,” she told me.

In other words, a child doesn’t necessarily have to be very ill to spread the virus. As long as a kid is near others with a load of virus in the nose or mouth — symptomatic or not — they could be a carrier and a transmitter.

A study released by Germany’s chief virologist Christian Drosten and others this week backs Zerr’s skepticism. Here’s what they found: “Analysis of variance of viral loads in patients of different age categories found no significant difference between any pair of age categories including children,” the researchers wrote. “In particular, these data indicate that viral loads in the very young do not differ significantly from those of adults.”

“Based on these results, we have to caution against an unlimited re-opening of schools and kindergartens in the present situation,” they concluded. “Children may be as infectious as adults.”

You can see a chart from the report below, which Drosten tweeted out Wednesday. What it makes clear, though, is the study looked at fewer cases of infected children than other age groups, which may have skewed the results. The paper also hasn’t yet been peer reviewed.

All this means there’s no scientific consensus on the infectiousness of children — and that has many health officials urging caution.

Because persons with asymptomatic and mild disease, including children, are likely playing a role in transmission and spread of COVID-19 in the community, social distancing and everyday preventive behaviors are recommended for persons of all ages to slow the spread of the virus, protect the health care system from being overloaded, and protect older adults and persons of any age with serious underlying medical conditions.

And Beth Riggs, a spokesperson for the Children’s National Hospital in Washington, DC, told me they continue to ask visitors — including young people — to follow “universal masking policies in place to help limit the potential spread of the virus and protect our patients, their families and our staff.”

Which makes the Swiss case — allowing health children to hug their grandparents — all the more troubling. It’s not that the country’s health officials say kids can roam free, but suggesting they effectively pose no risk is too absolute for experts like Zerr. “We have so much evidence of children with infections,” she told me after I read her the Swiss infection disease chief’s statement to the press. Koch’s statement, she told me, is “just not true.”

Covid-19 is a new disease, and as such, scientists have a lot more replicable research to do before the world can begin to even come close to understanding how children may spread it. And this uncertainty has many still taking necessary precautions until there’s more and confirmed evidence about whether children are actually rare spreaders of the disease.