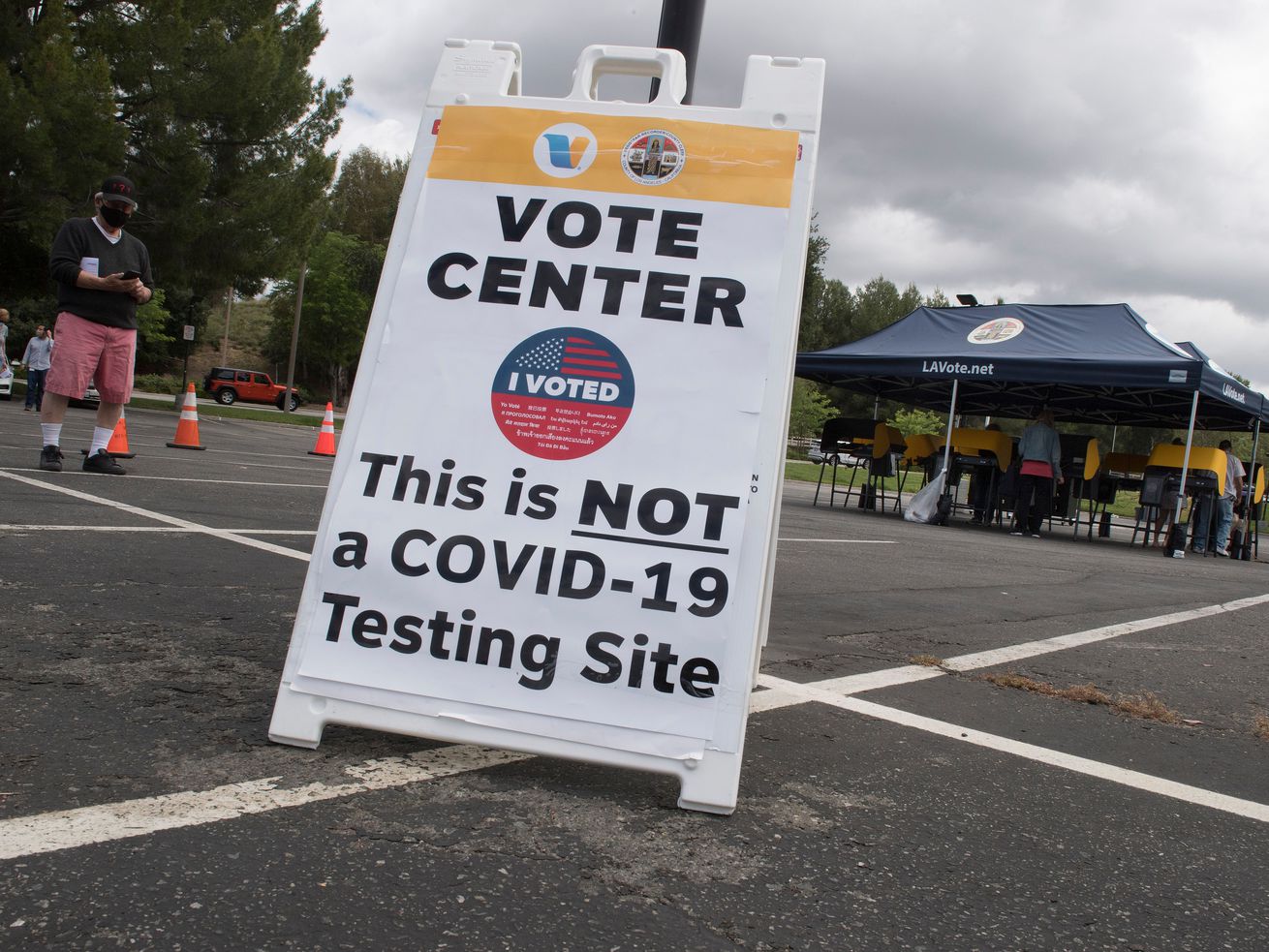 People wait to vote at a voting station for the special election between Democratic state assemblywoman Christy Smith and Republican businessman and ex-Navy pilot Mike Garcia to replace former Democratic Congresswoman Katie Hill in the state’s 25th Congressional District, in Santa Clarita, California, on May 12, 2020. | MARK RALSTON/AFP via Getty Images

The race is the first glimpse of major campaigning in the Covid-19 era.

A special election to fill the US House of Representatives seat left vacant by former California Democratic Rep. Katie Hill’s resignation is being held Tuesday, May 12.

The race, considered a toss-up by Cook Political Report, is being closely watched in part because of the circumstances that led to Hill’s leaving Congress and in part because the race is widely seen as previewing how the coronavirus pandemic will affect November’s elections. It also represents an opportunity for the Republican Party to retake one of the seats Democrats successfully flipped in the 2018 midterms.

Whoever wins the race — either Democrat Christy Smith or Republican Mike Garcia — will serve out the remaining eight months of Hill’s term. Smith and Garcia will face off again in November in this year’s general election race.

Polls close at 11 pm ET. Vox has live results in partnership with Decision Desk. However, because the race will largely be conducted via mail-in voting, it may take several days for a winner to emerge.

Hill became California District 25’s US representative in 2018 after defeating ardent Trump ally former Rep. Steve Knight by less than 3 percent in 2018. She resigned from Congress last October after nude photographs of her were released by conservative blog RedState and after she admitted to having a consensual relationship with a staff member.

Although polling of Tuesday’s race has far been fairly sparse, what surveys are available show a race that is extremely close.

A poll of 500 of the district’s likely voters conducted by 1892 Polling in mid-March showed Garcia, a former fighter pilot, with 43 percent support to the 39 percent support for Smith — currently a California state representative — with 10 percent of likely voters undecided. Given that the poll’s margin of error is 4.38 percent, Smith could have actually been in the lead.

That poll was taken before California Gov. Gavin Newsom issued a shelter-at-home order on March 19, forcing both campaigns to abandon traditional retail politicking techniques like door-knocking, in-person meet-and-greets, and fundraising events. What effect that has had on polling is not clear, and it also is not clear what effect reduced in-person voting will have.

While Newsom issued an executive order Friday ordering mail-in ballots for November’s general election to be sent to all registered voters in the state, Tuesday’s special election will be conducted via a mix of mail-in and in-person voting.

Mail-in ballots haven’t been returned at an overwhelming rate, according to a National Republican Congressional Committee memo, which said that as of Friday, 50,191 Republicans (45 percent) had returned their ballots compared to 39,230 Democrats (35 percent) and 16,528 (15 percent) from unaffiliated voters.

Given that the race will essentially be re-run again in November, whoever wins will likely have a small incumbent advantage when they face off again in a few months.

Because it’s expected to be close, the race is seen as a national bellwether for this fall. With her victory, Hill flipped a seat that had been held by Republicans since 1993, helping Democrats take control of the House of Representatives.

Democrats are expected to keep control of the chamber after November’s elections. But a solid Smith win could indicate that another blue wave is imminent this fall, while Republicans hope that a Garcia win might signal that their party could recover several of the House seats it lost during 2018’s midterm election.

Because of this, the race has drawn attention from national politicians. President Donald Trump accused Democrats of trying to “steal the election” in a tweet Saturday after the National Republican Congressional Committee sent a “call to arms” to House Republicans, asking them to “raise hell” about the race.

Governor @GavinNewsom of California won’t let restaurants, beaches and stores open, but he installs a voting booth system in a highly Democrat area (supposed to be mail in ballots only) because our great candidate, @MikeGarcia2020, is winning by a lot. CA25 Rigged Election!

Beyond the partisan stakes of the race, the election is being watched closely for pandemic-related campaign tactics that could be scaled to more national races. The candidates debated over videoconference calling and both shifted toward phone-banking in lieu of door knocking.

“We transitioned from being able to canvass, and stand on street corners waving signs, and going out to events with Mike, like meet-and-greets and that sort of thing, to all phones,” Marian Salazar, a volunteer for the Garcia campaign, told NPR.

Smith’s campaign followed a similar playbook and made sure staffers and volunteers were equipped with pandemic-related resources for those they reached out to by phone.

“We’ve made sure that all of our callers, as they’re reaching out, are equipped with information like how to connect to state resources, the domestic violence hotline, mental health services, or being able to connect people with their nearest food pantry,” Smith told NPR.

Regardless of who wins Tuesday, the two candidates will continue campaigning into the fall to compete for control of the seat for the next two years.

The race, with all of its Covid-19-related complications, is more complicated due to the shadow of Hill.

A Democratic rising star, 32-year-old Hill was expected to defend her seat this November after a narrow but significant victory over Knight. Hill was part of a congressional class that included a record-breaking number of women. As reporter Michelle Ye Hee Lee noted at the Washington Post, she was one of the first openly bisexual people to serve in Congress, and was one of the “Big Six” first-term members of Congress to serve in major leadership roles.

About halfway through her freshman term, however, Hill resigned after conservative outlet RedState reported that she and her husband had been involved in a relationship with a female campaign staffer, beginning in 2017 and ending after Hill moved to Washington in 2019.

The site posted photos it said depicted the women together, with the face of the staffer, who was not named, blurred out. In one of the images, a woman identified by RedState as Hill is nude.

RedState went on to publish texts purportedly between the staffer and Hill’s husband, Heslep, alluding to abusive behavior in the relationship and to report that Hill had been involved in a year-long affair with her congressional legislative director, Graham Kelly, which caused her husband to file for divorce.

Hill said in a statement to the Post last October that “allegations that I have been involved in a relationship with Mr. Kelly are absolutely false,” and that she was “saddened that the deeply personal matter of my divorce has been brought into public view and the vindictive claims of my ex have now involved the lives and reputations of unrelated parties.”

Then, in a separate statement to constituents, Hill acknowledged a relationship with the female campaign staffer, saying she knew it was “inappropriate, but I still allowed it to happen despite my better judgment.”

The statement was supportive of the staffer and featured a request that the public respect her privacy, but also decried the manner in which the relationship came to light. “Distributing intimate photos with the intent to publish them is a crime, and the perpetrator should be punished to the full extent of the law,” she said, adding that she had notified Capitol police about the leak of the photos.

The circumstances around the former lawmaker’s exit led to an examination of the standards men and women in public office are held to, as Vox’s Li Zhou explained at the time:

Rep. Duncan Hunter, a Republican lawmaker who prosecutors say engaged in five affairs, including one with his own staffer, is still in office.

The uproar that Hill has encountered over these allegations serves to highlight the double standard that men and women have long faced when it comes to the treatment of their sexuality: Not only were naked photos used to shame Hill — a tactic that’s leveraged overwhelmingly against women — the penalty she faced was far more severe than that experienced by many of her male counterparts.

This is not to say that Hill, herself, should not have resigned, but that others fielding similar allegations — like Hunter — should have to deal with the same consequences. Another example that’s been raised as a point of comparison is President Donald Trump, who’s still in office after more than 20 allegations of sexual misconduct have been brought against him.

These double standards were not fully reckoned with, nor were concerns that the way Hill’s photographs were disseminated would discourage young women from running from office. But they do mean Hill is not running for her old seat, and that either Smith or Garcia will soon represent the people of California’s 25th District.