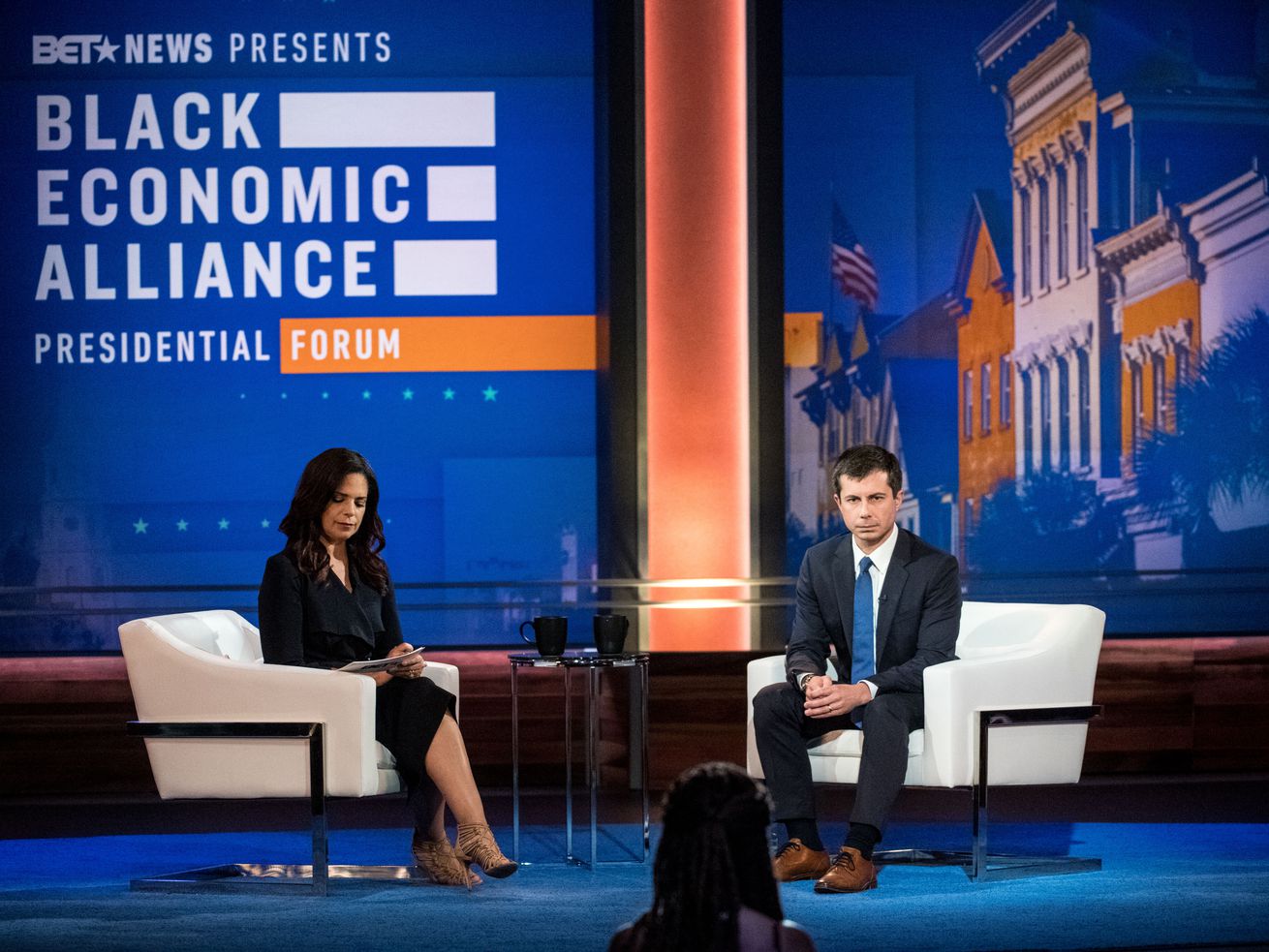 A handful of Democratic presidential candidates spent Saturday sharing their plans to address America’s growing racial wealth gap, highlighting the benefits of their economic plans amid an ongoing fight to gain support from black voters, a crucial part of the Democratic electorate.

Four presidential candidates — Sens. Elizabeth Warren and Cory Booker, former Texas congressman Beto O’Rourke, and South Bend, Indiana Mayor Pete Buttigieg — were in South Carolina for the Black Economic Alliance Presidential Forum, which was dedicated to discussing the significance of “work, wages, and wealth” in black communities. An edited taping of the forum was broadcast on BET on Sunday morning.

The forum occurred as several presidential candidates ramp up their black outreach efforts in an attempt to break away from a crowded primary field. Black voters are roughly one-fifth of the Democratic electorate, and are especially powerful in states like South Carolina, where black voters make up as much as 60 percent of the Democratic voting bloc. Several polls of black voters in recent weeks have noted that this group is especially concerned about economic issues heading into the 2020 election.

Economic issues are a broad category, and a range of things, including wages, unemployment, entrepreneurship, student debt, gentrification, and mass incarceration were all discussed at the Saturday forum. While their focuses on Saturday differed, the candidates’ proposals all fit into a set of larger goals: ensuring that black people have access to capital and ending a growing racial wealth gap that has left white families with 10 times the wealth of black ones.

The racial wealth gap is a topic that has seen increased attention this cycle: Candidates have been actively describing the ways that economic disparities are rooted in historic actions that cause economic issues to impact communities of color differently. This attention has sparked discussions not only about the racial wealth gap, but reparations, affordable housing, and the continued effects of discrimination.

The forum offered a view into how the candidates in attendance plan to address these issues. And their remarks showed that while 2020 candidates may largely agree on the need to address racial economic disparities, they have very different plans on how to actually do so.

The candidates who did not attend have fared better in the past few months in polls of South Carolina’s voters, and Biden continues to lead the field among likely voters in the state. But the forum allowed the four candidates who spoke — all of whom have either failed to capture the attention of South Carolina’s voters, or have had inconsistent polling in the state (although Warren has surged significantly in recent weeks), to explain how they understand one of the most important issues for black voters.

They had varying degrees of success in doing so. Here’s what each candidate said they would do to economically empower black Americans on Saturday:

O’Rourke was first up at the forum, and said the federal government could play an important role in combating gentrification. He also defended his record in Congress and attempted to explain how he planned to overcome his low support among black voters.

The former congressman spoke about the importance of understanding how a history of discrimination and expulsion from wealth building continues to harm African Americans, specifically citing the pay gap between black women and white men, and the impacts mass incarceration have had on black employment. He called for using measures like the Paycheck Fairness Act, a congressional proposal which would ban employers from asking about a job applicant’s salary history; it would also require employers to share salary data with the Equal Employment Opportunity Commission to eliminate pay discrimination. O’Rourke went on to say that he supported ending the war on drugs, citing its disproportionate impact on communities of color.

O’Rourke released his small business plan on Saturday. It calls for the creation of 200,000 new small businesses and pledges to create a $10 billion small business credit initiative for “economically distressed areas.”

Warren was next to speak and she opened her remarks with a brief acknowledgement of the fourth anniversary of the 2015 massacre at Charleston’s historically-black Mother Emanuel Church.

She then launched into an overview of a number of policy proposals targeted at black communities, including her plan for a $50 billion fund for historically black colleges and universities, her proposal to erase student debt for the majority of borrowers, and her plans to increase the wages of childcare workers.

Warren noted that plans like these were necessary to counter federal policies that had denied African Americans a chance at wealth building. “Why do we have that kind of black-white wealth gap? A big part of it is because of discrimination that was actively fostered by the US government,” she said.

The bulk of Warren’s time was focused on a discussion of her “economic patriotism” plan, which calls for greater investment in and support of American jobs and workers.

She specifically pointed to her recently announced small business plan, which would provide $7 billion in grants to minority owned businesses. Warren’s plan would aim to create 100,000 new businesses to O’Rourke’s 200,000, but she would focus on grants rather than loans. Warren added that all grants would be distributed through a new “Small Business Equity Fund,” which would be overseen by experts who are women and people of color.

Like other proposals offered by the candidate, the plan would be funded by a wealth tax on the wealthiest Americans.

According to the New York Times, Warren left the stage to a standing ovation.

Buttigieg entered the Saturday forum polling at less than 1 percent among black voters, and openly acknowledged that he has more work to do to increase his profile and build trust with voters of color.

Like other forum attendees, Buttigieg also discussed the importance of acknowledging the historical disadvantages of black communities, saying that the country “can’t take racist policies and replace them with neutral policies.”

Much like O’Rourke, Buttigieg spoke more broadly about the need to improve access to housing; he also spoke about mass incarceration, saying that the government could use a carrot-and-stick relationship with states to encourage the adoption of practices that would help reduce the number of incarcerated people from black and brown communities.

Buttigieg also spoke of the importance of integrated neighborhoods, calling for a “21st century Homestead Act,” which he calls the “Douglass Plan” after activist Frederick Douglass. He says the plan would make it easier “to build wealth and equity while also building up neighborhoods in historically underserved areas and making sure we … support those most at risk of being driven out.”

The final speaker at the forum was Booker, who pointed to the fact that as a black man who lives in and represents a low-income black and brown community, he intimately understands the issues faced by black Americans, specifically citing the need to address issues like mass incarceration and affordable housing.

“This isn’t just about African American communities,” Booker said. “You cannot have a large segment of the population denied equal access to markets or capital or health care, and not think that is a cancer that affects the body as a whole.”

As for policy, Booker largely focused on promoting his “baby bonds” plan, which would create a savings account for all newborn children in the US, with yearly federal contributions to the account decreasing as parental income increases. The Times notes that Booker was also one of the more well-received candidates to the forum, and that he was the only other candidate to receive a standing ovation.

Black voters say economic issues are a top concern in 2020

Several polls of black voters taken in the weeks before the Black Economic Alliance Forum have found that black Americans are especially worried about the economy, and its impact on things like education and access to health care.

These attitudes were most recently captured in polling released by the Black Economic Alliance shortly before Saturday’s forum. In that poll, 57 percent of black respondents said that they were somewhat or very dissatisfied with the state of the economy; 81 percent said that it was “very hard” to reach the American Dream.

Like other surveys of black voters, the Black Economic Alliance survey found that Biden holds a significant lead over the rest of the field, with 36 of black adults saying that they were enthusiastic about his candidacy. But survey respondents also said that they are much more likely to support candidates with clear policy plans to improve the economic prospects of black communities, suggesting that at least some voters would be willing to pivot to a different candidate than Biden.

The Black Economic Alliance argues that the economic concerns of black voters show that it is crucial for political candidates to clearly state how they plan to address the need for “work, wages, and wealth” in black communities. And while the Saturday forum allowed some candidates further articulate their plans, the group says that it will be important for all of the candidates to offer serious plans and discuss them regularly.

“Make no mistake, black voters will determine who sits in the White House and walks the halls of Congress, in both the House and Senate,” Akunna Cook, the executive director of the Black Economic Alliance, said on Saturday. “We will ensure that all the candidates, regardless of party, are prioritizing our issues in this election.”