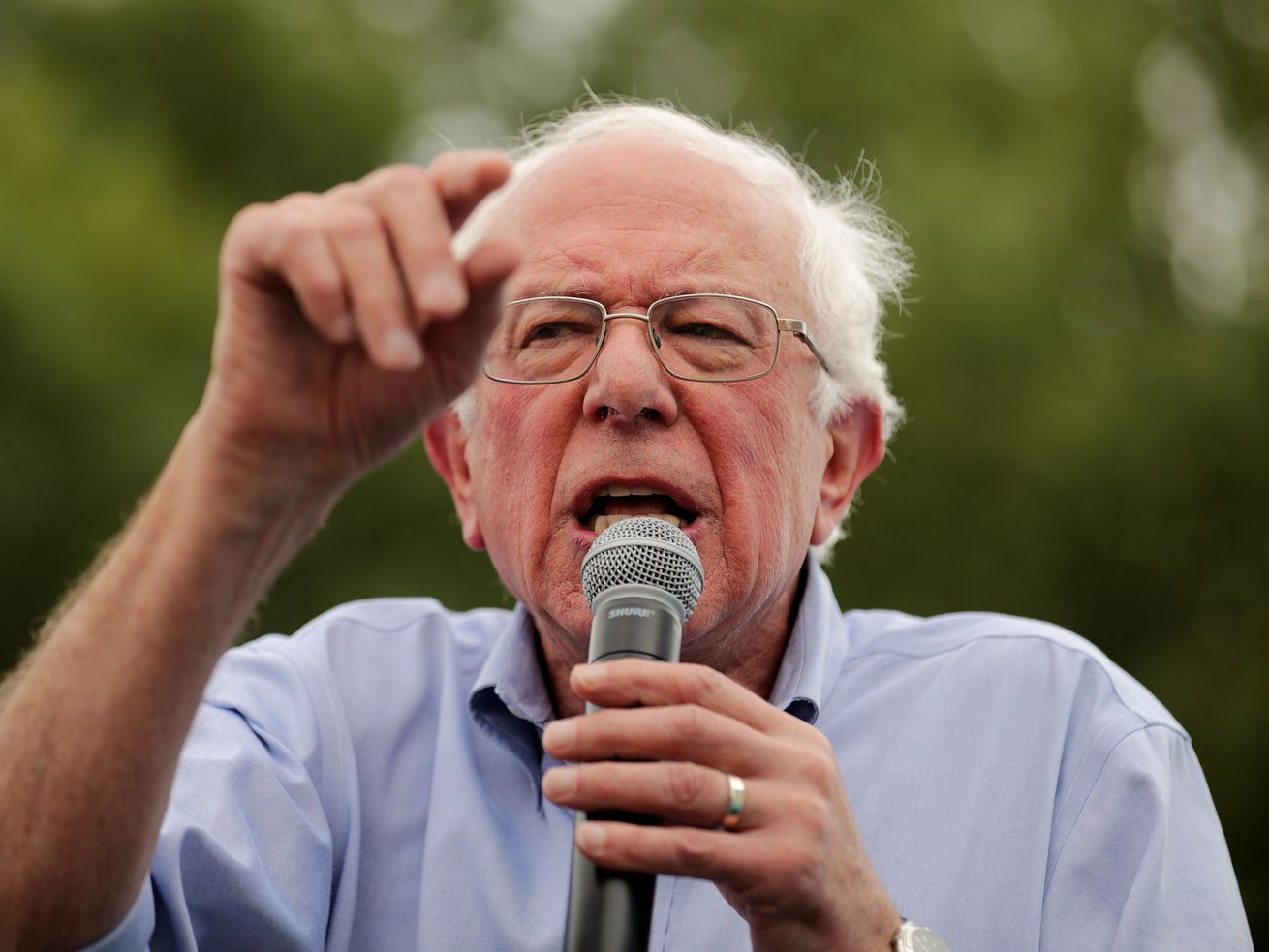 Bernie Sanders was an early critic of mass incarceration — and now has a plan to fight it.

Bernie Sanders is unique among Democratic presidential candidates as an early critic of mass incarceration. His criminal justice reform plan, released over the weekend, is his map for how he’d do something about it.

The plan notes the unique position the United States is in today: The country locks up more people than any other in the world, even authoritarian regimes like China, Cuba, and Russia. Sanders points out that this has disproportionately hurt black and brown Americans, who face racial disparities in arrests, incarceration, police use of force, and other kinds of law enforcement.

The rise of Black Lives Matter and a broader bipartisan push for criminal justice reform, which most Democrats support, have led the Democratic candidates in 2020 to take a more aggressive stance on criminal justice. Sanders is far from the first candidate to release a criminal justice reform plan; Joe Biden put out a similarly comprehensive plan in July, Amy Klobuchar and Cory Booker have unveiled clemency reform proposals, and Kamala Harris released proposal focused on marijuana reform.

But unlike candidates who might be trying to atone for past support for “tough on crime” policies (like Biden, Harris, and Klobuchar), Sanders’s plan reflects his more progressive history on these issues. While Sanders did vote for a now-controversial 1994 crime law that helped scale up incarceration, he was always clear that he opposed its mass incarceration elements — and questioned if the US should lock up so many people to begin with.

“We have the highest percentage of people in America in jail per capita of any industrialized nation on Earth,” Sanders said in 1991. “We’ve beaten South Africa. We’ve beaten the Soviet Union. What do we have to do, put half the country behind bars?”

More than two decades later, Sanders is putting those criticisms into a policy proposal, one that does begin to chip away at incarceration, even if it doesn’t — and can’t — address all of the problems that made America the world’s leader in incarceration.

What Bernie Sanders’s criminal justice reform plan would do

Sanders’s plan is aiming for sweeping change: It’s an attempt to address the long list of complaints and criticisms raised against America’s criminal justice system for decades.

Sanders also sets out a pretty ambitious goal “of cutting the incarcerated population in half.” The Sanders campaign said this is not just for the federal level, but the state level too.

That detail matters because the federal system is a relatively small part of the US’s prison system, holding about 12 percent of the overall prison population. It’s also very different from the state and local prisons in another way: While roughly half of people in federal prison are in for drug offenses, the plurality or majority in local and state facilities are in for violent crimes.

The plan includes the following proposals, and many more:

Despite its ambitious goal, Sanders’s plan makes little mention in general about how to get states to pull back incarceration. By contrast, Biden’s plan included $20 billion grant program to encourage states to reduce incarceration and crime. These kinds of financial incentives for criminal justice policy have struggled in the past, but they’re one of the few levers the federal government has to make an impact on the systems driving most of the incarceration in the US.

Another question is if these ideas could really get congressional approval. While Sanders could do some of them alone, the majority of the plan would require congressional action. Given that Congress took years of negotiations to pass a fairly mild criminal justice reform bill in the First Step Act, it’s unlikely it will do something as sweeping as Sanders is proposing anytime soon.

At the very least, though, Sanders is signaling that he’s taking a broad view of the criminal justice system and the steps needed to reform it.

Sanders has been a consistent critic of mass incarceration for decades

Sanders has long had an independent streak on a whole host of issues, from health care to education. But that’s also been true for mass incarceration — an area in which Sanders was critical of both Democrats and Republicans even as “tough on crime” policies that ramped up mass incarceration were broadly popular.

In 1991, Congress was debating a punitive crime bill that would have, among many other steps, widened the use of the death penalty and ramped up prison sentences. The final bill — a compromise after Democrats and Republicans went back and forth to see who could look tougher — was sponsored by Democrats, actually getting more votes from Democrats than Republicans in the House.

Sanders, then Vermont’s representative in the House, argued the bill was “not a crime prevention bill” but “a punishment bill, a retribution bill, a vengeance bill.” He criticized it for expanding the use of the death penalty as other developed nations were reeling it back or ending its use altogether. He quipped that America was on a path to “put half the country behind bars.”

He suggested that instead of focusing on locking up more people, the US should try to focus on “the root causes of crime.” He ultimately voted against the 1991 bill, which died in the Senate.

Sanders did vote for a major 1994 law, which President Bill Clinton strongly pushed for at the time, that also ramped up the use of prisons and lengthened prison sentences.

But Sanders emphasized that although he believed some people were “horribly violent … deeply sick and sociopathic,” he didn’t back the mass incarceration approach. “It is also my view that through the neglect of our government and through a grossly irrational set of priorities, we are dooming today tens of millions of young people to a future of bitterness, misery, hopelessness, drugs, crime, and violence,” he said at the time. He added, “We can either educate or electrocute. We can create meaningful jobs, rebuilding our society. Or we can build more jails.”

Instead, Sanders said he voted for the 1994 law because he supported certain parts of it — such as the Violence Against Women Act, which helped crack down on domestic violence and rape.

This was well ahead of the times. Back in the 1990s, there was broad bipartisan consensus in support of mass incarceration. The 1994 law was one of Bill Clinton and Biden’s biggest legislative achievements.

The drive to lock up more Americans had its roots in crime waves fueled by racial and economic disparities, the crack epidemic, distrust in government, and other factors. Those crime waves led to massive increases in crime that consumed the public’s attention. In the early 1990s, based on Gallup’s polling, crime was among Americans’ top concerns.

Criminal justice expert Mark Kleiman explained the national attitude at the time in a piece for Washington Monthly:

No one knew then that we’d seen the worst. All we knew is that the number of murders had more than doubled, that the total number of violent crimes had increased six-fold in the previous thirty years, that no reversal of trend seemed to be in sight, and that the street-level arms race financed by the crack trade had expanded the age range of killers and their victims down into adolescence. If you weren’t seriously worried about crime in 1994, you just weren’t paying attention.

This led politicians on both sides of the aisle to seek “tougher” solutions — not just with the 1994 crime law, but all sorts of state and federal legislation that ramped up punishments for everything from stealing to drugs to murder.

Sanders was an outlier against this broader push. He voted against the 1991 crime bill, and criticized the 1994 law’s “tough” provisions. He voted against ending Pell Grants, which pay for higher education, for prisoners. He voted to amend the 1994 crime law to ban the federal death penalty. And he voted against the Anti-Terrorism and Effective Death Penalty Act of 1996, which restricted defendants and prisoners’ ability to contest court rulings — even when the rulings may be unconstitutional.

Sanders did, in 1995, suggest that penalties for powder cocaine should be harsher to match penalties for crack cocaine, and boasted about supporting some “tough” laws, particularly programs funding police, in 2006.

But the bulk of his comments in the 1990s indicate he was skeptical of mass incarceration, which he suggested wouldn’t be very effective in fighting crime. The research has now proven that suggestion right.

Years after Sanders railed against locking up so much of America, many studies have found that mass incarceration doesn’t really work.

Another huge review of the research, released in 2017 by David Roodman of the Open Philanthropy Project, found that releasing people from prison earlier doesn’t lead to more crime, and that holding people in prison longer may actually increase crime.

That conclusion matches what other researchers have found in this area. As the National Institute of Justice concluded in 2016, “Research has found evidence that prison can exacerbate, not reduce, recidivism. Prisons themselves may be schools for learning to commit crimes.”

Similarly, other research suggests that more aggressive policing strategies, such as stop-and-frisk, don’t significantly reduce crime (although by disproportionately hassling black and brown communities, they do reduce faith in police among minority neighborhoods). In fact, recent studies indicate that more targeted policing approaches, when coupled with social service programs and public health interventions in a way that fixates on the very few individuals at risk of violence, are much more effective for combating crime and murders.

To this end, a recent report by the Brennan Center for Justice concluded, “Between 2007 and 2017, 34 states reduced both imprisonment and crime rates simultaneously, showing clearly that reducing mass incarceration does not come at the cost of public safety.” Other places that have pulled back aggressive policing and criminal justice policies, such as New York City after it halted stop-and-frisk, have seen crime continue to drop.

Since most incarceration happens at the local and state level, it’s unclear just how much Sanders, as president, could do to combat mass incarceration.

But having an early critic of mass incarceration in the White House would be a boon for criminal justice reformers. A constant worry in the criminal justice reform space is what would happen if, say, the crime rate started to rise once again. If that were to happen, there could be pressure on lawmakers — and it’d at least be easier for them — to go back to “tough on crime” views, framing more aggressive policing and higher incarceration rates in a favorable way.

Sanders’s plan and record during a previous crime wave suggest that he would not, at the very least, use the bully pulpit of the presidency to call for more incarceration. That could add an extra layer of resistance to the lock-’em-up movement if crime did happen to rise under President Sanders.