BEACHGOERS were yesterday warned to be extra vigilant because of a desperate shortage of lifeguards.

The alert came as thousands flocked to the seaside in temperatures as high as 83F (28.2C) — beating Tuesday’s high to become the hottest day of the year so far.

Families were told not to use inflatables, including lilos and rubber-rings, because of the danger of floating away from safety.

A source said: “As a result of the lockdown, we had to pause all of the training and recruitment. Now that restrictions have been eased we are a long way behind. We have no lifeguards out there at the moment.”

Normally up to 1,500 are recruited to watch over Britain’s 200-plus beaches between May and September. The crisis means these are unmanned for the first time since patrols were introduced in 2001.

By the peak of summer only a third might be covered, selected on risk and popularity. Anyone seeing someone in trouble will have to call the coastguard on 999.

The alarming development was revealed as part of a “beach safety campaign”.

An RNLI spokesman said: “We are working with local authorities and landowners to provide a lifeguard service as quickly as possible.

“It takes time. We learned of the easing of lockdown restrictions at the same time as everyone else.”

Gareth Morrison, RNLI’s head of water safety, said: “If the charity’s lifeguards were present on the beaches today, they would be preventing many incidents before they even occurred.

“They would be directing people to safe swimming areas, highlighting dangers such as rip currents and advising people not to use inflatables.”

A flip in the sea 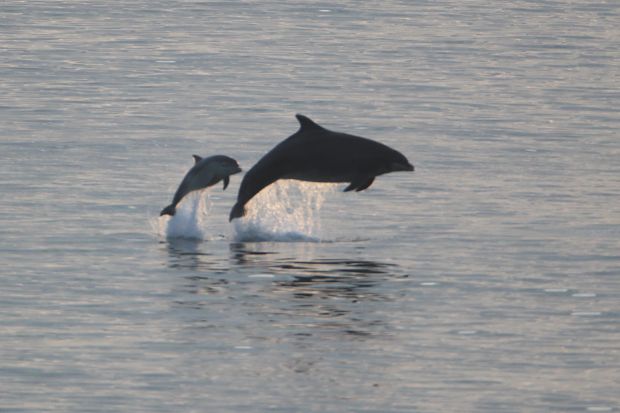 ABOUT ten bottlenose dolphins were spotted off the coast of the North-East yesterday morning.

The dolphins were seen jumping out of the water between Whitley Bay and Cullercoats Bay.

Photographer Owen Humphreys said he saw “a few fins and counted a pod of seven to eight adults and two juveniles”.

Claire Hughes, director of HM Coastguard, said: “Now, more than ever, we need people to respect the sea and the coast.”

The mercury soared to 83F at Santon Downham, Suffolk. Beaches including Southend, Brighton and Margate were crammed.

At Bournemouth beach, where social distancing was impossible, a neon warning sign was set simply to: “Too busy.”

Despite appeals to stay away, so many sun-seekers flocked to the West Country that traffic wardens reported running out of tickets.

One officer in North Devon tweeted: “Every double yellow line from Woolacombe to Morthoe is covered with cars and vans.

“Cars mounting pavements to get by while pedestrians try to cross the road. All offences have been recorded and will be processed.”

Mysterious mansion belonged to Greek tycoon who vanished with family

PARTRIDGE IN A PAY FREEZE 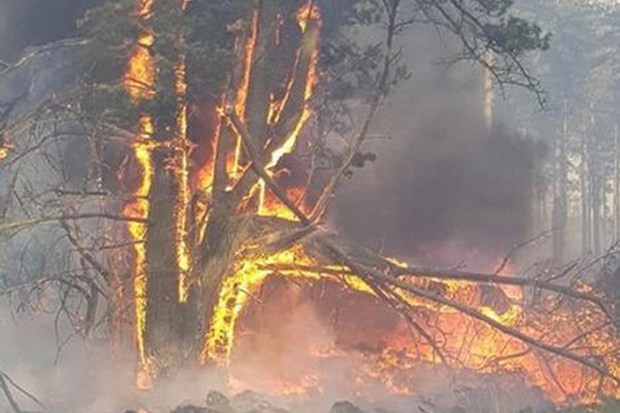 A TREE is engulfed by flames as an inferno sweeps through a forest declared a major incident zone yesterday.

Over 150 firefighters battled the blaze, roads were shut, power lines isolated and a probe launched.

Temperatures have climbed all week. But that will end today with the chance of thunder, lightning and torrential downpours.

Met Office chief meteorologist Paul Gundersen said: “It will be warm with hazy sunshine. But there is the potential for storms.”

It will then turn cooler with strong winds developing by Friday.

Hundreds of Brits were sunbathing in Hyde Park, London, on Wednesday[/caption]

Kids enjoy the hot weather on the beach in Poole, Dorset, yesterday[/caption]