A BABY is being tested for coronavirus in Northern Ireland after falling ill following a flight back from Hong Kong.

The tot, said to be less than six months old, was taken to Altnagelvin Hospital in Londonderry on Thursday after its worried parents called A&E.

A source told the website: “The baby and family were met at the hospital by a fully prepared medical team who were wearing medical hazmat gear and masks.

“The NHS protocol is in place and the child has been placed in isolation while tests are being carried out.

“It will take a little time to get the results back which would allow the medical team to actively treat for the virus if the tests are positive.

“For now the child is undergoing tests and being treated along lines of the protocol and the situation is under control.” 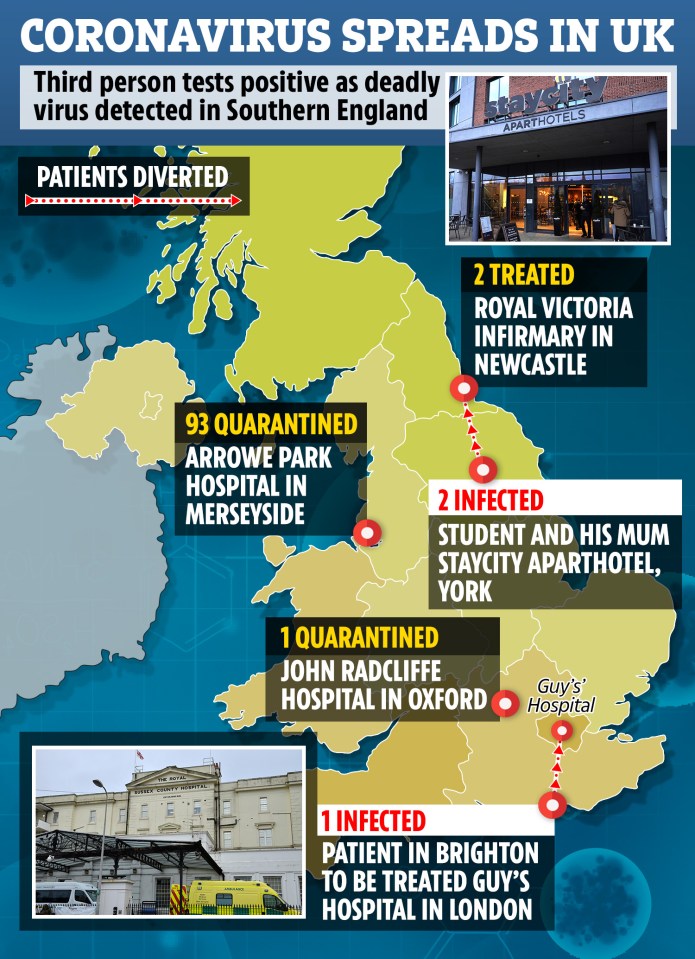 Western Trust said they do not comment on individual cases.

It comes after a third person tested positive for the killer virus in the UK today after picking up the bug in Singapore.

The patient – thought to be the first Brit infected – was diagnosed after falling ill in Brighton and has been transferred to a specialist isolation unit at Guy’s Hospital in London.

And two days ago, two Chinese nationals were confirmed to have the deadly virus in York.

England’s top doctor said if anyone has been to those nations recently and falls ill should self-isolate and call NHS 111.

Until now, this advice only related to people from Wuhan in China.

Chris Whitty, Chief Medical Officer of the NHS, also confirmed that doctors will now begin testing anyone showing signs of the illness, if they have recently travelled from Asia to the UK.

Prof Whitty said: “A further patient has tested positive for coronavirus, bringing the total number of cases in the UK to three.

“The individual did not acquire this in the UK.

“We are using robust infection control measures to prevent any possible further spread of the virus.”

Currently, the global death toll stands at 565 with more than 28,500 people infected across 28 countries and territories.


Friends spot something creepy in teen’s selfie – can you find it too?

In the UK a total of 566 people have been tested for the virus, of which 563 were confirmed negative.

More than 90 Brits who were evacuated from Wuhan are currently in quarantine in Arrowe Park Hospital in Merseyside.

All UK hospitals have been told to prepare secure coronavirus zones to “avoid a surge” in emergency departments.