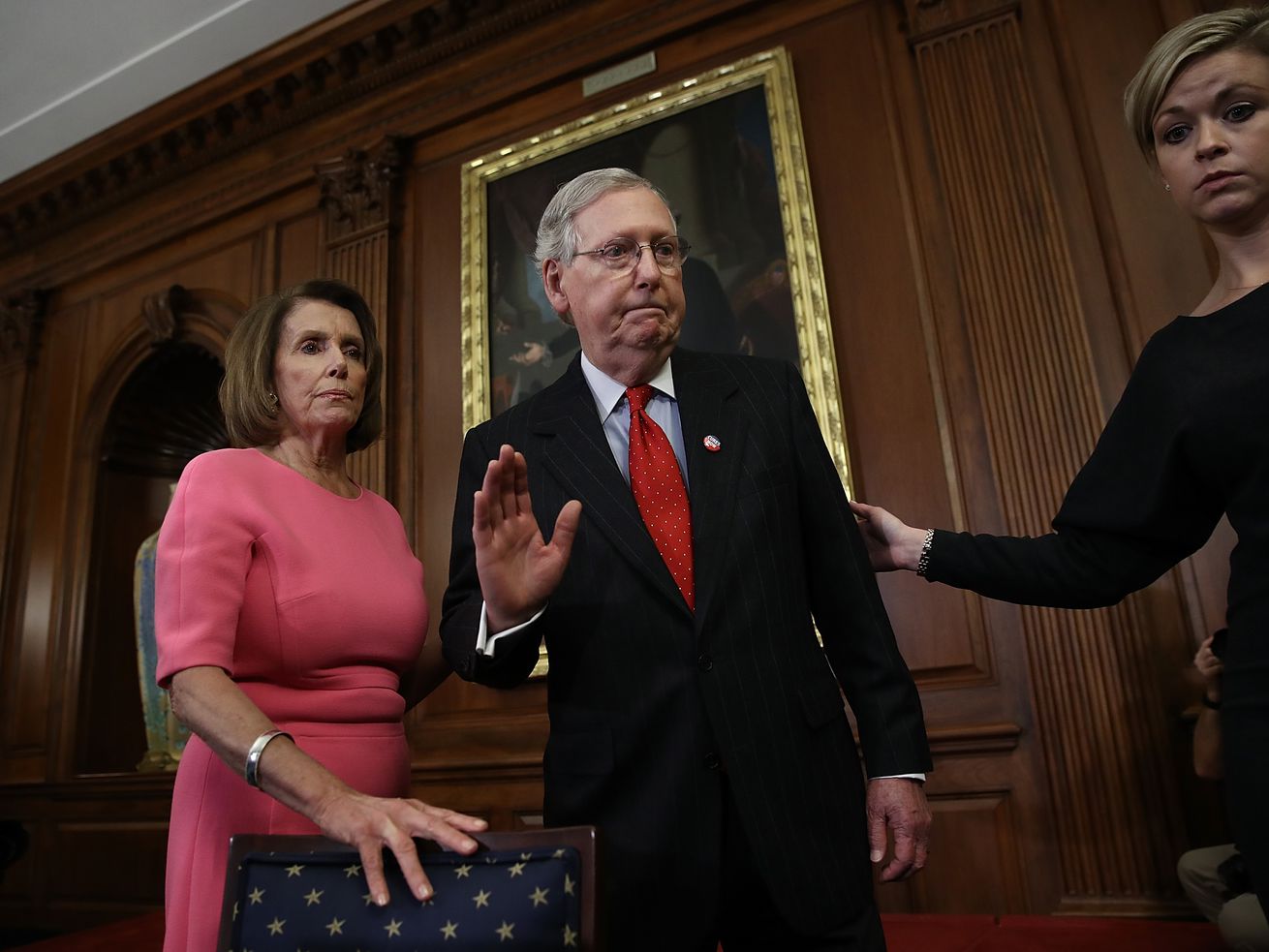 The White House and Congress could be headed toward yet another standoff on immigration, as a humanitarian crisis escalates at US detention centers on the southern border.

The Senate passed $4.5 billion in supplemental border funding on Wednesday afternoon on a bipartisan vote of 84-8. The vote came the day after the House of Representatives passed their own version of a $4.5 billion supplemental funding bill. Both bills would direct money towards the humanitarian needs of immigrants after multiple reports of squalid, overcrowded conditions at a detention center in Clint, Texas. The House bill passed 230-195, with four progressive Democrats voting no and three moderate Republicans voting in favor.

The Senate’s bipartisan bill doesn’t go as far in laying out clear care standards that detention centers must meet. The Senate bill also contains $145 million that would go to the Pentagon to help with border control and the humanitarian situation at the border, which could meet resistance in the House.

Democrats have been vocal in asking for a conference between the two chambers to hash out the differences on the two piece of legislation, but McConnell hasn’t yet said whether he’ll do so. McConnell believes the Senate version will have a better chance of being signed by President Donald Trump.

Pelosi is already making overtures to the president herself. At 12:47 pm on Tuesday, Pelosi called Trump and the two spoke for 15 minutes. The purpose of the call was “to try to reconcile the House and Senate border supplementals,” according to a senior Democratic aide.

It’s been a dizzying week for immigration news in Washington, with reports of even more shake-ups within Trump’s Department of Homeland Security. On Tuesday, John Sanders, the acting commissioner of Customs and Border Protection, stepped down. Administration officials told the Washington Post and New York Times he would be replaced with hardliner Mark Morgan, the acting director of US Immigration and Customs Enforcement.

On top of all that, Trump tweeted on Saturday that he is giving Congress a two-week deadline to “work out a solution to the Asylum and Loophole problems.”

Plainly speaking, there is no way Congress can address comprehensive immigration reform in two weeks. Trump’s wild ask, as well as the constant churn within his administration, signals the president is angry that more Central American migrants are still coming to the US, and blaming his officials and Congress for not getting enough done (as he perceives it).

With Congress trying to sort out $4.5 billion in supplemental border funding before they leave for the July Fourth recess, Trump’s threat of mass deportations of immigrants in 10 US cities continues to dangle. But Trump himself also may be the biggest obstacle to Congress actually getting anything done.

The next steps in Congress

While it’s unclear — and unlikely — that lawmakers would be able to finalize any comprehensive immigration reform bill in such a tight time frame, both chambers have passed versions of a funding package tied to humanitarian aid at the border.

This package, which is ultimately expected to allocate around $4.5 billion in additional funding for medical care, shelter, and food for unaccompanied children arriving at the border, is intended to help alleviate some of the horrific conditions that currently exist.

Providing some kind of humanitarian aid to the border — a request first made by the Trump administration in May — is something that Democrats and Republicans broadly agree on. Where they disagree, however, is on the allocation of this aid for other operational costs, like increases in detention beds, something Democrats have long opposed.

Previously, when lawmakers sought to attach this funding to a disaster aid package that passed earlier this year, Democrats wanted to designate $3.3 billion in funding for humanitarian aid. They were not interested, though, in providing another $1.1 billion that would be used for other purposes such as detention beds and ICE personnel costs.

House and Senate lawmakers are still working through these differences, with summer recess rapidly approaching. On Friday, the House unveiled its version of a humanitarian aid package, which includes several differences from an option the Senate advanced on a bipartisan basis earlier.

Notably, the House bill does not include any money for the Department of Defense and ICE Homeland Security investigations. It would also ensure unaccompanied minors in detention have access to quality medical care and translation services, and would put in strict care standards for detention facilities to follow, or they would risk losing their federal contracts.

For the four progressive lawmakers who voted against the package — Reps. Alexandria Ocasio-Cortez (NY), Ilhan Omar (MN), Rashida Tlaib (MI), and Ayanna Pressley (MA) — adding any money for immigration enforcement was a nonstarter. That’s what they perceived the Democrats’ package doing. Much of this tension came to a head on Monday night, when a number of progressives huddled with Pelosi about the legislation.

“We’re spending $155 million with the marshals. That is in conflict with my morality on how funding should be allocated,” Omar told reporters Tuesday. “We would love for all of the money and assistance to go to HHS and that really has not been on the table.”

After last-minute negotiations between leadership and the Congressional Progressive Caucus, the vast majority of progressives ultimately supported the supplemental package.

Pelosi and other Democratic leaders have argued that approving the House version is important so that lawmakers aren’t forced to back the more conservative option offered by the Senate, Politico reports. “We’re running out of time,” Rep. Veronica Escobar (D-TX) told the Wall Street Journal. “Are there things I would like to change? Absolutely. But we have a real crisis.”

These conflicts will be more than enough to sort out in the president’s two-week timeline, and rumblings about a collaboration between Sens. Lindsey Graham (R-SC) and Dick Durbin (D-IL) on long-awaited asylum reforms likely won’t materialize until well afterward.

Graham’s bill, the Secure and Protect Act, was introduced this May and would require migrants coming from Central America to apply for asylum outside the US. He said last week that he was interested in working with Durbin to reach a bipartisan agreement, and according to CNN, the two lawmakers were holding discussions with White House aide Jared Kushner to negotiate a potential deal.

While such efforts have ultimately failed in the past, with Trump rejecting multiple bipartisan proposals that would have enshrined protections for DREAMers into law, a spokesperson for Graham told Vox that the lawmakers are “still talking.” According to a congressional aide, however, a markup on this bill wouldn’t happen until after the July Fourth recess, days if not weeks after the president’s self-imposed deadline of two weeks.

Trump’s two-week deadline for Congress to fix asylum laws came suddenly and somewhat out of the blue, after a Friday night phone call with House Speaker Nancy Pelosi. Trump had been threatening deportation raids in 10 major US cities before Pelosi intervened.

The House speaker asked the president to halt the raids during Friday’s call, a source familiar with the events told Vox. Pelosi appealed to Trump “to stop this brutal action which will tear families apart and inject terror into our communities,” a White House source told NPR. Other officials within Trump’s administration had also expressed concern about the raids, the Washington Post reported.

Trump also could have been weighing another high-stakes immigration issue: ongoing bipartisan congressional negotiations for a funding bill for border aid, which the White House reportedly had been warned could hit a wall if the raids went forward and angered Democrats.

Whatever swayed the president, he largely accommodated Pelosi’s requests from the call: Pelosi asked Trump to tweet that he would halt the planned deportations, which he acquiesced to, a senior Democratic aide told Vox. By Saturday afternoon, Trump tweeted that he would delay immigration raids for two weeks “at the request of Democrats,” and wait and see if Congress could come up with a bipartisan solution on asylum.

Pelosi quickly responded with her own tweet, saying, “Mr. President, delay is welcome. Time is needed for comprehensive immigration reform.”

Pelosi has a long history of calling Trump’s bluffs in one-on-one conversations with the president, and Friday night’s call was no different. The looming question, as usual, is whether Trump will go back on his word.

Case in point: The president’s new demand for Congress on asylum law came out of the blue; Pelosi and Trump didn’t discuss asylum law on their Friday night call, the Democratic aide said.

Democrats have little incentive to wade into a new fight on asylum laws now — they and Republicans are in the middle of supplemental negotiations. As lawmakers are scrambling to address one crisis, Trump is piling on another demand about asylum that could prove to be a sticking point.

“Democrats have no interest in weakening asylum protections,” the senior Democratic aide said. “We are happy to have conversations about comprehensive immigration reform for which we have been calling.”

Trump has a long history of being an unreliable negotiating partner

Congressional Democrats and Republicans have been in this situation many times before with the president: Trump makes a demand on immigration, congressional leaders negotiate with him and think they’ve struck a deal, and then Trump backtracks or comes out with a wildly different demand.

This administration has already been embroiled in two government shutdowns over immigration funding. The December-January government shutdown (the longest in America’s history) was started because Trump changed his mind at the last minute and decided not to accept a government funding bill offered up by House and Senate Republicans because it didn’t have money for his border wall.

And the three-day shutdown that happened a year earlier, in January 2018, stretched out because of the president’s constantly shifting whims during negotiations. “I honestly don’t know what is going on,” the lead Democratic negotiator, Sen. Dick Durbin (D-IL), told Vox’s Tara Golshan in the middle of that standoff. “This president is just unable to make a promise and keep it.”

Part of the reason Democrats have had such a hard time dealing with Trump is because he often agrees with them during one-on-one phone calls or Oval Office meetings, before his staff intervenes. This has happened in talks that have had nothing to do with immigration.

Earlier this year, Democrats were optimistic they could reach a deal with Trump on an infrastructure deal after the president told Pelosi he “liked” the $2 trillion number she was proposing for a package to repair America’s roads and bridges. A month later, Trump had walked away from negotiations in a huff, furious over House Democrats’ investigations of him.

This is a familiar pattern: Trump says one thing and does another. With the threat of raids hanging on his latest asylum request, House Democratic leadership has no reason to believe this time will be any different.