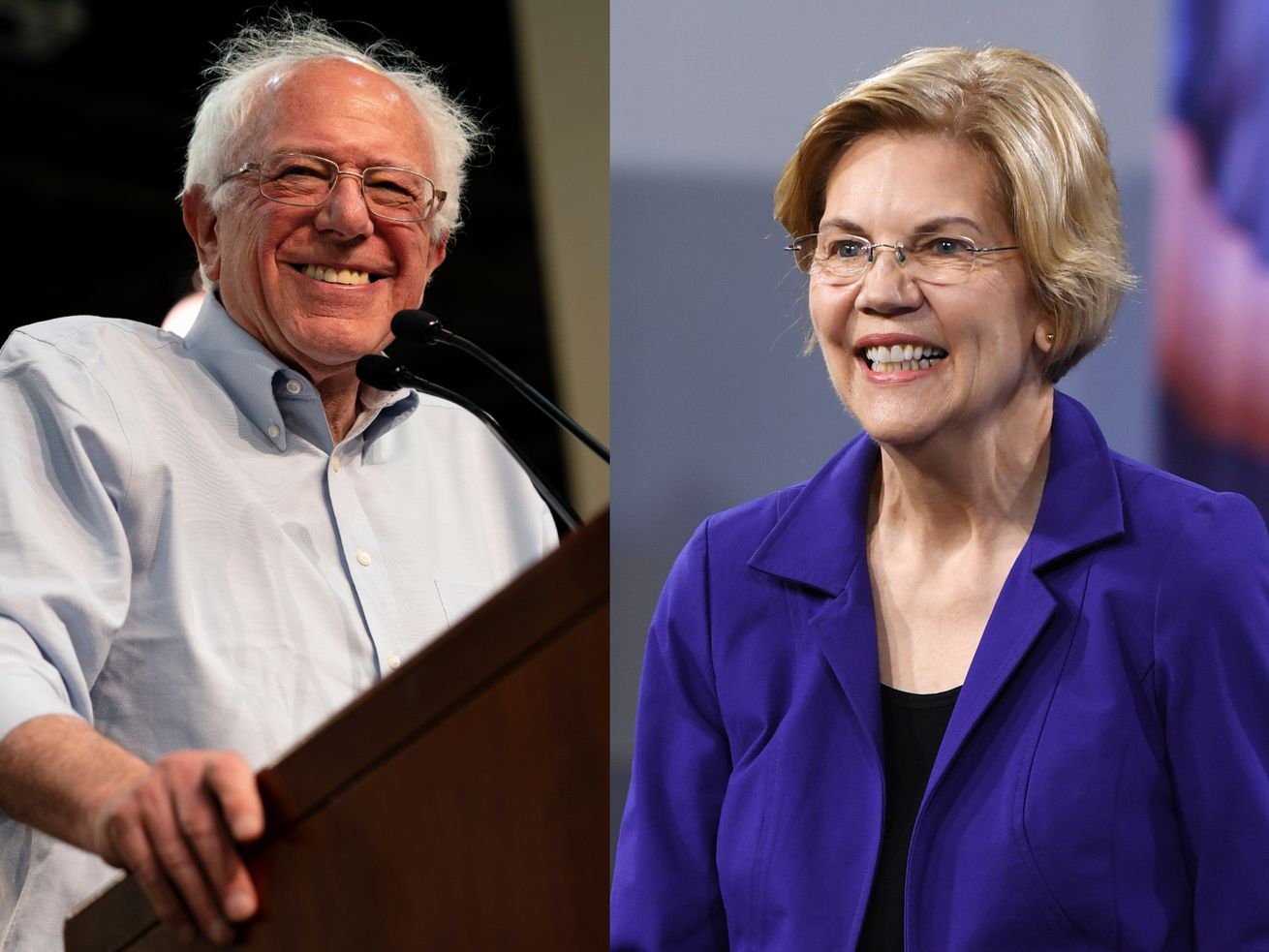 At the Poor People’s Campaign presidential forum held Monday on poverty and racism, Warren laid out her vision to end inequality with, “we start in America with a wealth tax,” explaining, in detail, her proposal for a 2 percent tax levied on assets more than $50 million. She emphasized her brand as the candidate with the plans, as the Washington Post’s Dave Weigel pointed out.

Sanders stuck to his brand, too, of calling for a political revolution. “In my view, there will never be any real change in this country unless there is a political revolution,” Sanders said at the event. “And that means that millions of people have got to stand up and take on the corporate interests, the billionaire class, the 1 percent and tell them that in this country our economy and our government belong to all of us and not just wealthy campaign contributors.”

Sanders and Warren are clearly two separate human beings. But within the liberal-to-left political intelligentsia there’s a debate: Are they actually the same?

It’s been a question that both Warren and Sanders have had to answer to, and a longstanding argument among the pundit class. It’s been made all that more poignant as Sanders and Warren have been duking it out for second place in early 2020 polls — an indication that progressive voters are beginning to split between the two.

Sanders and Warren’s teams see clear differences, as do their supporters. Warren will quickly point out that Sanders is a self-avowed democratic socialist (although there’s a debate in the Democratic Party about that, too). She, on the other hand, is a capitalist who believes in markets, as long as they are strongly regulated.

Others say it’s a difference in praxis; “much of it comes down to the matter of regulation vs. revolution,” writes Elizabeth Bruenig, a columnist with the Washington Post; Warren’s vision is deeply rooted in her policies solving the ills of society, whereas Sanders is calling for a social movement to upend the American political order as we know it. Then again, it’s hard to ignore that they are two candidates that back many of same policies. Enough so that some, like Vox’s Matt Yglesias, argue that they are interchangeable as progressive candidates.

There are actual differences between Warren and Sanders, both in how they navigate policy, and very much so in ideology and political style. But what this means for the presidential nomination is still unclear. It is, after all, extremely early in the race. How the two candidates perform in the debates, on the campaign trail, and so forth, will likely go a long way to help voters differentiate the two.

Warren and Sanders generally agree on a lot of policy

“Elizabeth and I end up agreeing on a lot of issues,” Sanders said at a CNN town hall in April. It’s true. Side by side, their agendas don’t look too different.

Sanders and Warren both want to make college free. Sanders has not yet unveiled a new plan for free college, but his campaign says they will be coming out with a proposal for universal free college that will also “forgive substantial student loan debt.” Sanders has previously proposed eliminating undergraduate tuition at four-year institutions by committing $47 billion per year to states that participate in a 2-to-1 federal funding match program and has a student loan refinancing proposal. Warren has proposed a plan, which eliminates tuition at four-year institutions, and has a debt forgiveness program that cancel up to $50,000 in student loan debt for an estimated 42 million Americans. Both support universal child care and preschool.

They both want to raise the minimum wage to $15 an hour. Both have been strong supporters of unions and the labor movement. Sanders has fought alongside McDonald’s, Amazon, and Disney workers to raise their wages and improve conditions. His campaign has repeatedly supported different unionization efforts (including at Vox Media, which owns this website).

Both see unfettered greed gnawing away at the country’s middle class. They both have progressive wealth taxes to pay for a bigger social safety net. Warren has a proposal to implement a wealth tax on Americans with fortunes worth over $50 million. Sanders has a proposal to dramatically expand the estate tax, leaving most estates untaxed, save for estates of the very rich, topping out at a maximum rate of 77 percent.

Both have aggressive agendas targeted at Wall Street. Sanders has a proposal that would put a cap on the size of financial institutions, that Jeff Stein at the Washington Post reported would break up six of the biggest firms — JPMorgan, Bank of America, Citigroup, Wells Fargo, Goldman Sachs, and Morgan Stanley. Warren has a corporate governance proposal, which Vox’s Matt Yglesias explained would give workers bigger say over corporate boards, limit corporate executives’ ability to sell shares of stock that they receive as pay. She has also pledged to break up big tech companies like Facebook and Apple.

But much as they agree, there are policy and governance areas where the two notably diverge. Warren supports reparations, Sanders is opposed to them. Warren is for ending the filibuster in the Senate, Sanders has warned against it. And when it comes to health care, the policy issue Democratic voters consistently list as their top priority, Warren and Sanders don’t have the same convictions.

Warren has co-sponsored Sanders’s single-payer proposal, but on the campaign trail keeps her talking points on universal health care; she speaks about Medicare-for-all more in terms of expanding public options for health care, rather than eliminating private insurance altogether. It’s in stark contrast to Sanders, who takes every opportunity to explain and advocate for single-payer health care, making the case that the incentives cannot be truly in the interest of the patients unless private insurance is out of the equation.

Another is foreign policy. The two have taken the lead on establishing a progressive approach to foreign policy on the road to 2020, however, as the New Yorker’s Osita Nwanevu writes “Sanders’s critique of American foreign policy generally runs deeper and goes back farther.” As often pointed out by the Sanders-supporting contingent in this debate, Warren, who has made a point to target Pentagon corruption on the campaign trail, herself has been seen as a champion for defense contractors in her own state of Massachusetts, where giants like General Dynamics and Raytheon are major employers and hold billion-dollar defense contracts with the federal government.

All said, to a more casual political observer, their takeaway message can sound very similar. Sanders likes to say, “at the end of the day, the one percent may have enormous wealth and power, but they are just the one percent. When the 99 percent stand together, we can transform society.” And Warren, she says she’s in a “fight to build an America that works for everyone, not just the wealthy and the well-connected.”

The fundamental difference in ideology

Underlying all this, is a fundamental difference in how Sanders and Warren see themselves on the ideological spectrum.

Warren is a social democrat. Sanders is a democratic socialist. The difference between the two is best explained by how Warren and Sanders convey their skepticism toward capitalism, said Sheri Berman, a political scientist with Barnard College, who has written extensively on the history of the left.

“Both Sanders and Warren have put forth a slew of policies a couple of election cycles ago would have been seen just far ahead of where the Democratic Party was,” Berman said. “If you believe in capitalism and you believe it has gone a little off the rails in the last generation, but it remains the best system to maintain economic growth and democracy, then Warren is the better candidate for you.”

“Or do you believe that capitalism is inherently unjust, inherently unstable?” Then Sanders is the right fit, Berman said.

Prominent writers on the left argue this ideological divide has played out in practice, too. In January, the Intercept’s Zaid Jilani wrote for Jacobin:

When Warren says that the primary difference between Sanders and herself is that she’s a proponent of capitalism, it’s not just rhetoric. Her life’s work has been to make markets more competitive and equitable, not to redistribute money from the rich to the poor and remove big chunks of economic life from the private sector.

To [Sanders], the problem is not so much that the rules are rigged so people can’t become entrepreneurs, or that regulators need to be empowered to act on behalf of the public. The problem is that the government is not doing enough to bypass the private sector to directly deliver funds and services to the poor and working class.

This difference goes a long way to explain how Warren and Sanders present themselves on the campaign trail. As Warren brands herself has the progressive policy wonk, ready and eager to dive deeply into each on of her many, intricately crafted proposals, Sanders pivots back to his political revolution.

This all goes back to what Bruenig writes in the Washington Post.

For a number of reasons — alienation and disengagement among the electorate, and the extraordinary power of big business and finance over government — [Sanders] doesn’t believe that even the cleverest, most uniformly applied regulations will solve what he views as a political and economic crisis.

The fight for a living wage? Sanders’s campaign is sending people to join workers on the picket lines. Ending the United States’ involvement in the war in Yemen? Sanders said his priority is to build a grassroots political movement to urge Congress to act.

The question around whether any of this actually matters comes down to how this plays out in the polls. In that vein, it might make more sense to look at the Democratic primary as a whole, rather than as fight between the two most progressive candidates in the race. The biggest divide in the primary is not between Warren and Sanders, but between the kind of economic and political world view currently being espoused by Biden, the leading candidate, and the progressive wing of the party.

“The movement inspired and organized by Sanders and his team has more potential to reshape global politics than anything since FDR,” Ryan Grim, the Washington Bureau chief at the Intercept tweeted. “But Warren is an ally of that movement, not its enemy. If that gets confused, the whole project could collapse.”

There is enough evidence to show, so far, that voters interested in progressive ideas are beginning to split between Sanders and Warren. Recently, Warren has been challenging Sanders No. 2 spot in the polls, behind Biden. Her numbers have been rising; both in the Democratic primary field, and in the head-to-head matchups against Trump. In the latter, she still lags Sanders (something his advisers point to, in making the case for Sanders over Warren).

It’s early. But it will be important to watch how these two campaigns interact with each other in the months ahead.