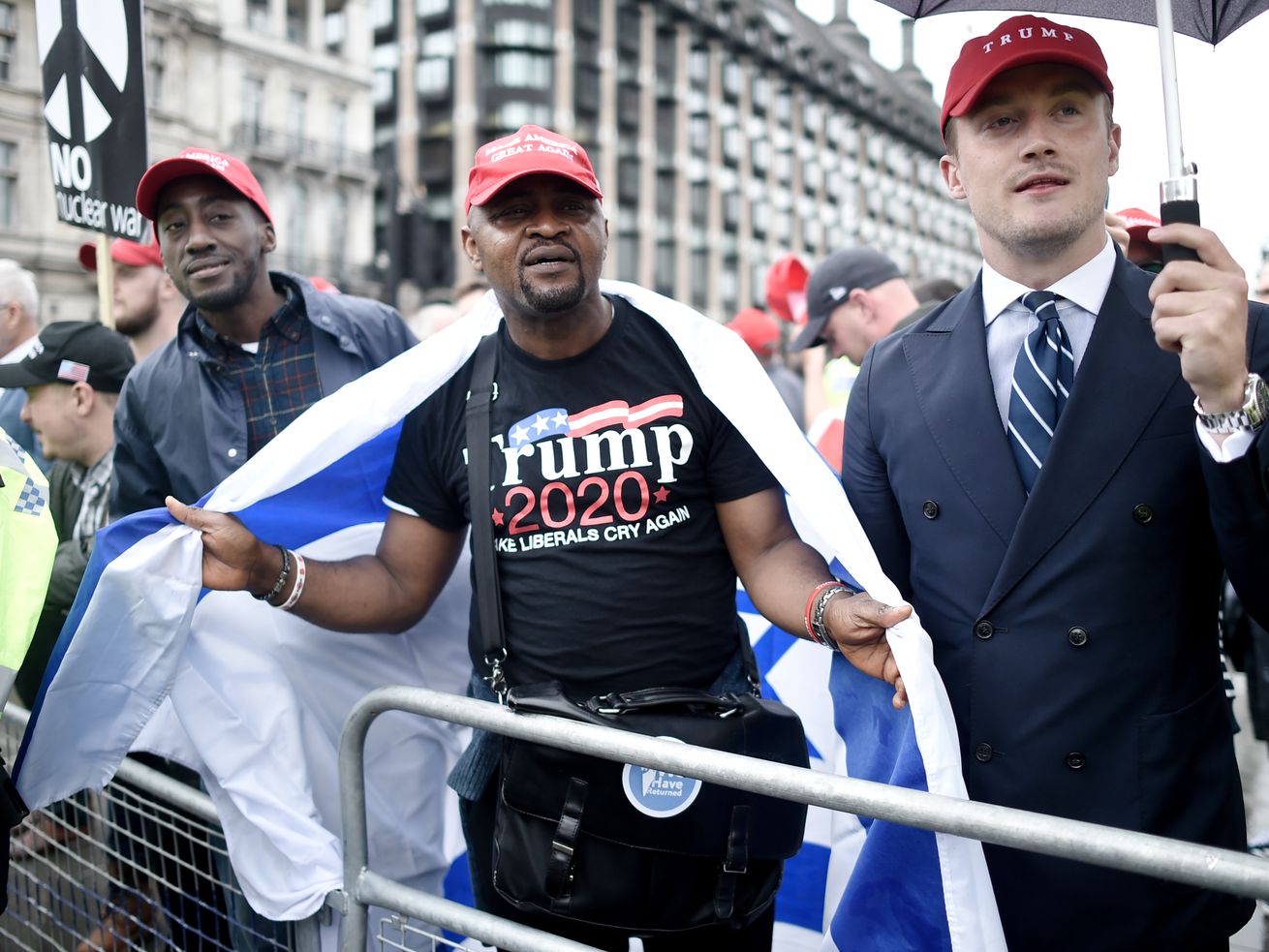 At one point, an elderly man was thrown on the ground.

Thousands of demonstrators gathered in London to protest President Donald Trump’s UK visit this week. But instead of successfully bothering the president, they settled for a much darker consolation: severely harassing Trump supporters.

Protesters in the British capital’s government district hoped to disrupt Trump’s Tuesday meetings with members of the royal family and outgoing Prime Minister Theresa May. Many expected the crowds to surpass last year’s gathering, which would’ve served as another powerful rebuke by citizens of a country that almost universally dislike the president.

But a massive security presence and the lack of novelty led to a smaller showing this year, it seems. That made it harder for demonstrators to make their signs of “Stand up against Trump,” “Make racists afraid again,” and “Dump Trump” visible to the president. Trump, of course, took all that to mean the size of the crowd was negligible (it wasn’t) and that most actually favored him (nope).

I kept hearing that there would be “massive” rallies against me in the UK, but it was quite the opposite. The big crowds, which the Corrupt Media hates to show, were those that gathered in support of the USA and me. They were big & enthusiastic as opposed to the organized flops!

But by ignoring reality, Trump actually missed the event’s biggest story: the horrid treatment of some of his supporters. While the protests were mainly peaceful, those extremely frustrated with Trump’s policies turned their vitriol on the president’s fans — making what should’ve been a peaceful protest into a disturbing and at times even violent affair.

It’s worth noting that people on both sides were out on the streets for different reasons. Many of those who came out to support Trump surely liked him personally, but some were there to show appreciation for his pro-Brexit and hardline immigration stance. Similarly, most of those chanting against Trump don’t like him or his policies, but many were also there to protest against fascism in general.

That mix led to a combustible situation on Tuesday.

In one instance, anti-Trump protesters surrounded an unidentified man in London’s Parliament Square while chanting “Nazi scum off our streets” directly in his face. The incident was captured on video by someone there.

Toward the end of the video, someone threw a milkshake — the “weapon” of choice for protesters in the UK denouncing far-right advocates these days — at his face and successfully hit him. The crowd cheered as the man looked visibly upset. He then proceeded to throw what seems like the remains of the milkshake at someone else and tried to kick a person who was off camera. He was then escorted away by a police official, though the crowd followed right behind him.

When the person wielding the camera asked a blonde woman in the anti-Trump group why she treated the man this way, she responded, “Because he’s a fucking Nazi.”

It’s unclear how the incident started or what, if anything, the man may have said to anger the crowd. But based on the video alone, the best guess is that he simply was a Trump supporter out on the streets to counter the president’s detractors.

But that was probably one of the lighter filmed incidents.

Another crowd chanting “Donald Trump’s not welcome here” tussled with an elderly man in a red-and-white hat. Anti-Trump protesters grabbed at the man and pushed him away from them, eventually throwing him to ground. Others seeing the incident immediately stepped in, helped the man stand back up, and asked if he was all right.

It didn’t appear that the anti-Trump demonstrators regretted their actions at all. “If you act like that, you act like Donald Trump, so don’t,” a woman can be heard saying off camera.

Again, it’s unclear how the incident started or if the man did or said anything to provoke the protesters. But even if he did share some choice words, it doesn’t necessarily excuse the use of violence.

An elderly supporter of the US president is pushed to the ground during anti-Trump protests in London https://t.co/hDO99JOJ8h pic.twitter.com/nSWADhQEto

The situation got so bad for Trump supporters that at one point, London police had to barricade 20 of them inside a pub just to keep them safe. The anti-Trump crowd chased them inside but were turned away by authorities, after which the crowd began chanting, “Police protect the fascists!”

Police told the Independent on Tuesday that “a melee between opposing political groups” had broken out. “It is chaos.”

If the anti-Trump crowd’s goal was to openly and loudly show Trump the error of his ways, then the protesters failed miserably. The error, in this case, was clearly theirs.