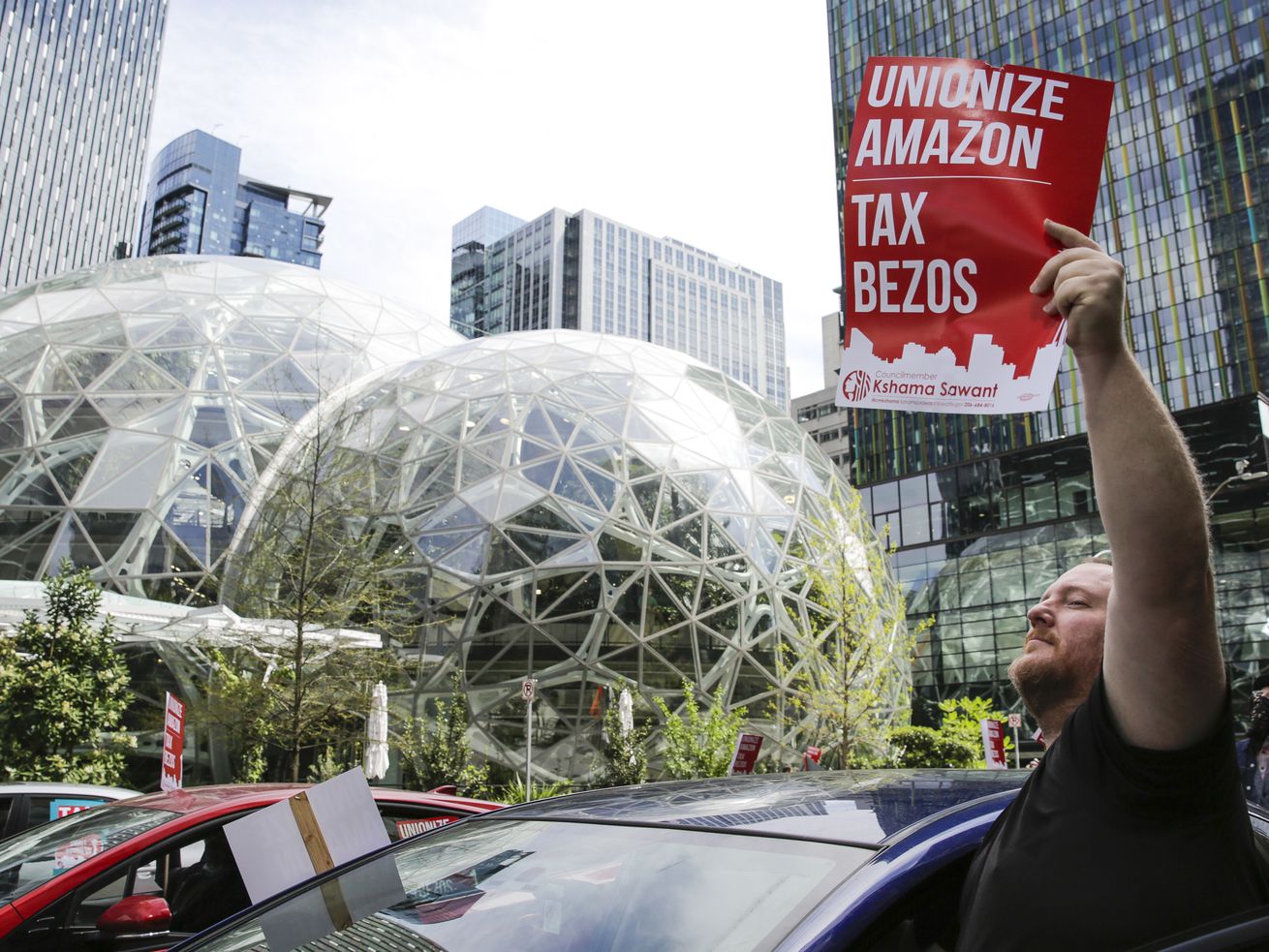 Protesters block traffic as they participate in a “car caravan” protest at the Amazon Spheres to demand the Seattle City Council tax the city’s largest businesses in Seattle, Washington, on May 1, 2020. | Jason Redmond/AFP via Getty Images

Tim Bray wrote that staying an Amazon VP would have meant “signing off on actions I despised.”

An Amazon vice president has resigned over the firing of colleagues who protested working conditions inside Amazon’s warehouse network during the Covid-19 pandemic.

Tim Bray, a veteran technologist and top engineer in Amazon’s AWS division, referred to the firing of activist insiders — which include multiple warehouses workers and white-collar employees — as “chickenshit” and “designed to create a climate of fear.”

“[R]emaining an Amazon VP would have meant, in effect, signing off on actions I despised,” he wrote on his blog. “So I resigned.”

Vice president is one of the top job titles at Amazon — only senior vice president and CEO are higher — so Bray’s decision is noteworthy. Tech workers can spend more than a decade at Amazon and never reach the VP level because, unlike in much of corporate America, the title signifies much more than middle management. Executives who oversee all of Amazon Prime, or all of Amazon’s grocery delivery services, also carry the VP title. Typically, this level of management never speaks out of line publicly.

But if an Amazon vice president was going to resign over these issues, insiders might have guessed it would be Bray — he was the only Amazon vice president last year to sign an open letter along with thousands of lower-level employees asking CEO Jeff Bezos to make changes related to the company’s climate impact.

In his blog post, Bray says he believes that the company is working hard to make the warehouses safe for its workforce during the crisis — “I have heard detailed descriptions from people I trust of the intense work and huge investments. Good for them” — but believes the firings of activist employees is “evidence of a vein of toxicity running through the company culture.” He added, “I choose neither to serve nor drink that poison.”

Amazon is exceptionally well-managed and has demonstrated great skill at spotting opportunities and building repeatable processes for exploiting them. It has a corresponding lack of vision about the human costs of the relentless growth and accumulation of wealth and power. If we don’t like certain things Amazon is doing, we need to put legal guardrails in place to stop those things. We don’t need to invent anything new; a combination of antitrust and living-wage and worker-empowerment legislation, rigorously enforced, offers a clear path forward.

The US Congress is currently conducting an antitrust investigation of the Big 4 tech giants, including Amazon, and seven House members last week called on CEO Jeff Bezos to testify.

Bray’s resignation marks an escalation of internal turmoil at Amazon that has bubbled to the surface over the last year, but which has really come to a head during the pandemic. His resignation comes after Amazon has fired at least two warehouse workers, Christian Smalls and Bashir Mohamed, after they led protests of warehouse working conditions. Amazon also fired two longtime corporate employees, Emily Cunningham and Maren Costa. Cunningham and Costa have spoken out in the past about the company’s negative impact on the environment as leaders of Amazon Employees for Climate Justice, and recently criticized the company for its treatment of warehouse workers. On Friday, some Amazon workers joined those from Instacart and Target in a strike that the companies said did not disrupt their businesses. But the public symbol of protest highlighted rare unity for non-unionized workforces and garnered widespread media attention.

Amazon has said it fired all of the employees for violations of company policies and not their activism, but all of the employees have said they believe they were targeted for calling out the company. Internal conflict is encouraged to some extent inside Amazon, but the company has now drawn a red line publicly on what type of dissent it is willing to accept among its ranks. Bray’s resignation comes after some corporate employees expressed outrage internally over the company’s handling of the firing of Christian Smalls. Some employees told Recode on Monday that the fact that a VP quit could inspire other Amazon employees to do the same.

An Amazon spokesperson did not immediately respond to a request for comment.