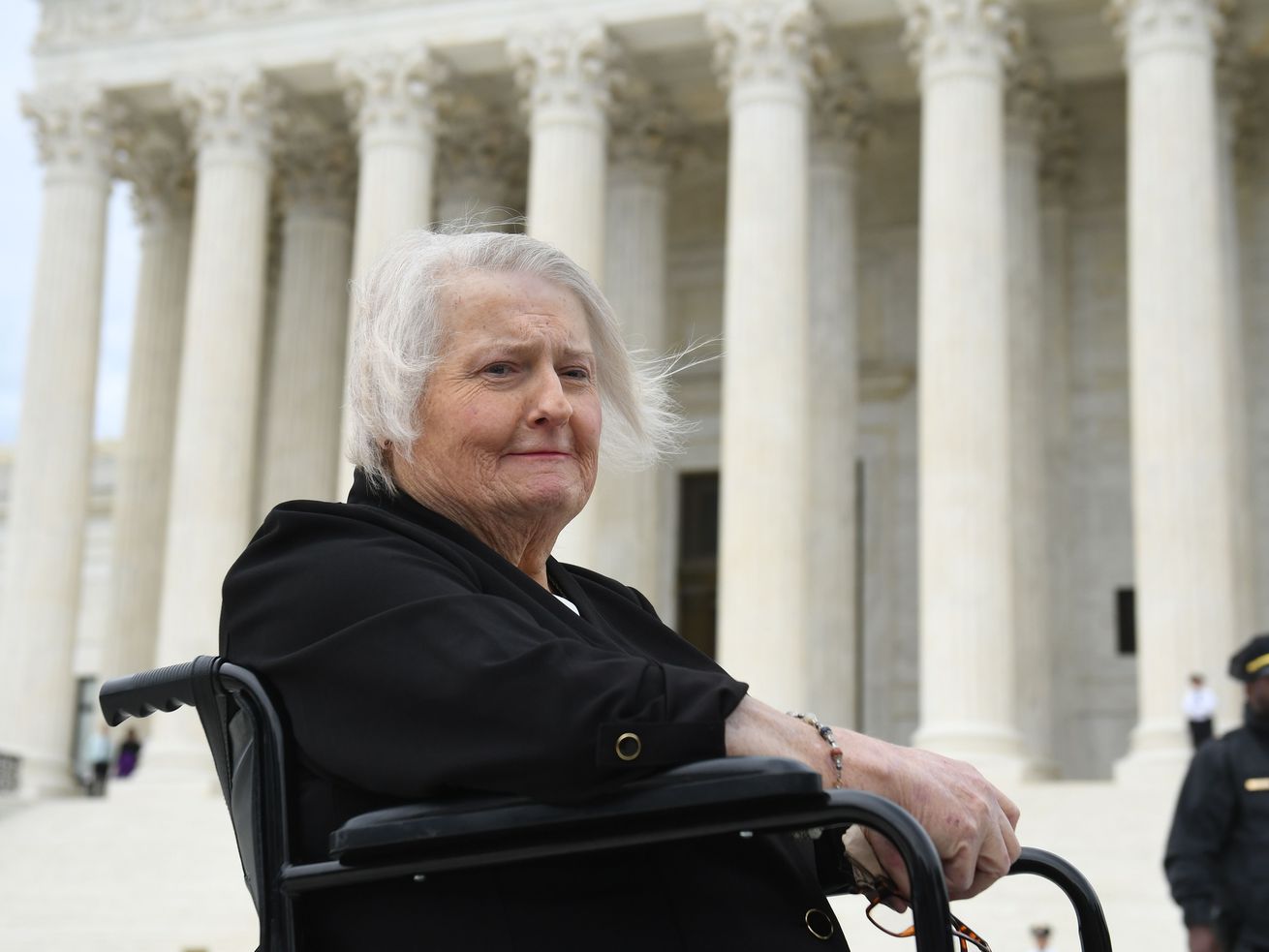 Transgender activist Aimee Stephens outside the US Supreme Court in Washington, DC, on October 8, 2019. | Saul Loeb/AFP via Getty Images

Stephens has entered hospice care due to long-term health issues.

When Aimee Stephens told her boss in 2013 that she planned to transition to female, she was fired from her job. Stephens then sued her former employer for sex discrimination.

“I’d given quite a few years to them, I had good reviews, we got along good — then all of a sudden it’s, ‘We don’t need you anymore,’” she told Vox last October. “I got mad enough to do something about it.”

That case became the first major transgender rights case to receive a full hearing at the Supreme Court last fall. But Stephens may not live long enough to hear the Court’s decision.

Stephens has long had kidney disease, which has required frequent dialysis. But her condition has worsened recently, making dialysis impossible, and she’s been moved into hospice care in her home state of Michigan, according to a GoFundMe set up by her wife Donna Stephens’s family.

“Being fired from her employer caused an immediate financial strain, leading her spouse Donna to take on several jobs,” reads a statement on the GoFundMe page. “Friends and family have stepped in when they can, but years of lost income have taken a toll on their finances. Because of this, we are asking for assistance with Aimee’s future funeral costs and end-of-life care.”

A representative from the American Civil Liberties Union, which represented Stephens at the Supreme Court, confirmed Stephens’s turn in health to Vox, and they plan to make a formal announcement early next week.

Ultimately, Stephens’s life is a reminder of the devastating costs of discrimination. She lost the job she loved simply for coming out as trans, and her family now finds itself trying to crowdsource her end-of-life expenses and wondering if justice will even be delivered.

In 2013, Stephens was employed at R.G. and G.R. Harris Funeral Homes in Shelby, Michigan, where she had worked her way up from apprentice to funeral director. At that time, she gave the funeral home’s owner, Thomas Rost, a note that she also shared with friends and colleagues about her gender transition. “I realize that some of you may have trouble understanding this. In truth, I have had to live with it every day of my life and even I do not fully understand it myself,” she wrote. “As distressing as this is sure to be to my friends and some of my family, I need to do this for myself and for my own peace of mind, and to end the agony in my soul.”

After he read the note, Rost simply said, “Okay.” Stephens was fired two weeks later, with Rost telling her that it was “not going to work out.”

Stephens sued, claiming her dismissal was discrimination on the basis of her sex, setting off a flurry of legal activity. According to court documents, Rost testified that he fired Stephens because “[she] was no longer going to represent [herself] as a man. [She] wanted to dress as a woman.”

In March 2018, the Sixth Circuit Court of Appeals ruled in her favor. “It is analytically impossible to fire an employee based on that employee’s status as a transgender person without being motivated, at least in part, by the employee’s sex,” the court said in its decision. “An employer cannot discriminate on the basis of transgender status without imposing its stereotypical notions of how sexual organs and gender identity ought to align.”

Harris Funeral Homes appealed to the Supreme Court, and oral arguments in her case were heard on October 8, 2019. Stephens’s case, along with two other cases heard that day, will determine whether LGBTQ people are protected from employment discrimination on the basis of sex under Title VII of the Civil Rights Act of 1964. The cases are among the few heard in the Court’s October session that haven’t seen a decision yet.

Multiple federal district and appeals courts have held that trans and queer people are protected under the law, but with conservatives holding a 5-4 advantage in the high court, Stephens’s case is far from certain.

“I found it a little overwhelming when I realized that I could be in the history books, but somebody’s gotta do it, and I’d be happy and satisfied to be that person,” Stephens told Vox in an interview the morning before oral arguments.

The difference is that Stephens got mad enough to take a stand. But she’s also learned that the road to being treated fairly is painstaking. “We’ve found that the wheels of justice turn slowly,” she said last fall. “But we’re hanging in there and at least now we can sort of see the light at the end of the tunnel.”

Her case has massive implications for the millions of trans people living in the US — even if Stephens herself won’t live long enough to stand in that light.